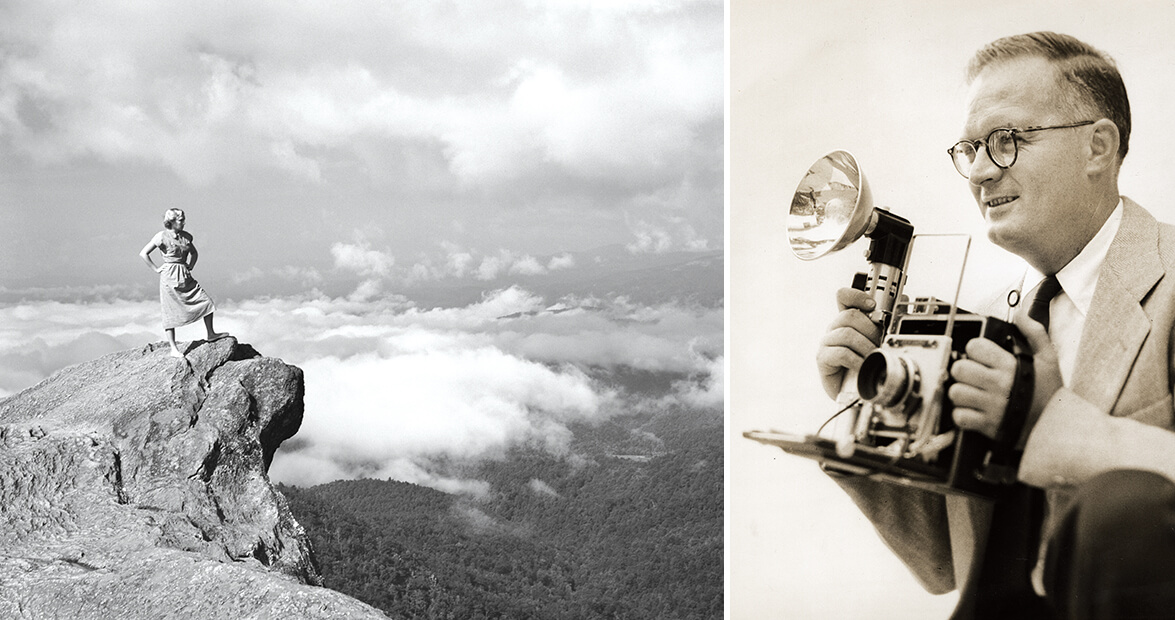 In 1934, a 13-year-old boy from Wilmington crossed the state for a summertime adventure at Camp Yonahnoka, a refuge of campfires and canoes where a fortunate kid might learn to shoot a rifle, pilot a canoe, or, in the case of Hugh Morton, pick up his first camera.

Some of Morton’s first shutter clicks caught his fellow campers arranging butterfly collections, playing accordions with the camp band, and warbling into a microphone for a skit. Morton so haunted the darkroom that by the next summer, he was teaching photography to a new crop of Yonahnoka boys.

Once his teenage eye strayed from marshmallow roasts, the boy from Wilmington climbed near the top of Grandfather Mountain and captured a view of the peak that would grace the cover of this magazine in 1941, which, at the time, was known as The State.

By the time Morton turned 31, The State’s front page had featured his shot of a cabin on Masonboro Sound nearly hidden by Spanish moss; his postcard-perfect image of a model posing, hands on hips, at the edge of Blowing Rock; and a line of Ocracoke fishermen folding nets on the beach.

To see this collection of photographs on display at the North Carolina Museum of History, and to follow Morton’s eye through 50 years, is to watch North Carolina’s identity take shape, much of it archived in what became the state’s signature magazine. 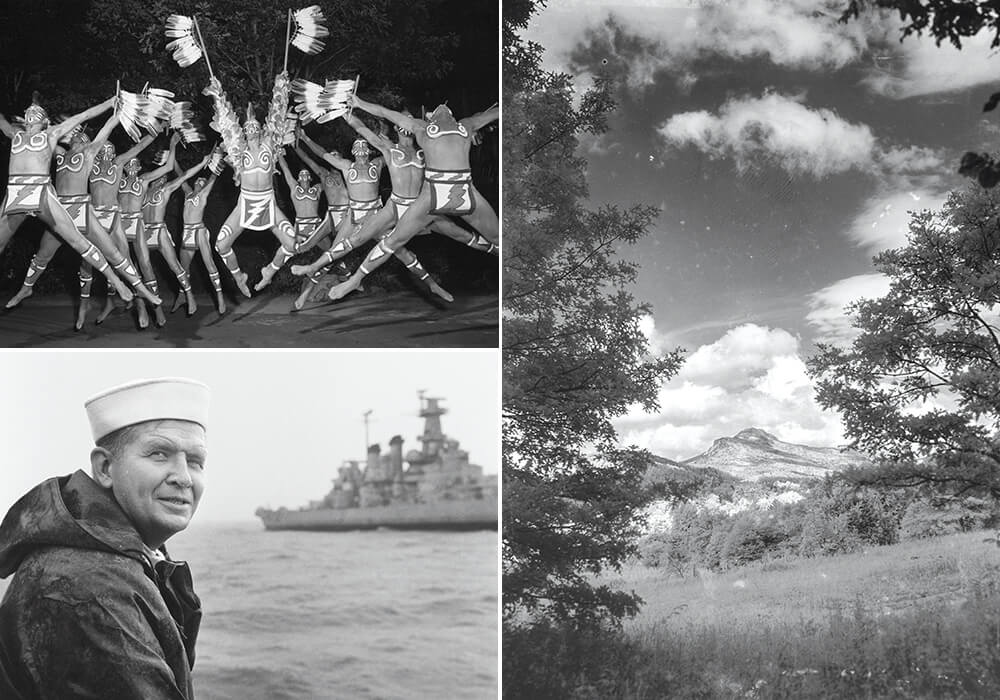 The range of scenes Morton photographed included Unto These Hills dancers in 1954, Gov. Terry Sanford and the USS North Carolina in 1963, and Grandfather Mountain in 1941. photograph by Hugh Morton, North Carolina Collection, UNC Chapel Hill Library

The subjects Morton chose to dote on — the familiar jawline formed by Grandfather Mountain’s craggy ridge, the USS North Carolina heading up the Cape Fear River to its new home, the seagulls frozen in air over Oregon Inlet — cemented themselves as state emblems. The faces in his photographs — Gov. Terry Sanford, University of North Carolina halfback Charlie “Choo Choo” Justice, the Cherokee dancers from Unto These Hills — look today like a gallery of North Carolina’s most beloved.

“It’s like having a piece of North Carolina,” says Ken Howard, museum director. “My favorite is shot from the top of Grandfather Mountain, showing Charlotte through the clouds. That’s an amazing view.”

When Morton died in 2006, The News & Observer in Raleigh eulogized him as the state’s unofficial photographer, a craftsman who not only framed the state’s finest scenery, but also popularized and promoted it.

“Morton seemed to be everywhere,” The N&O wrote. “On the dais when Gov. Luther Hodges crowned the 1959 Azalea Queen and Ronald Reagan served as emcee; on the sidelines when ‘Choo Choo’ Justice ran onto the football field for the last time as a Carolina player; under the goal when UNC basketball great Michael Jordan soared through the air; at the edge of the black bear habitat at his own Grandfather Mountain attraction when this year’s litter of cubs emerged from their den.”

His photographs drew tourists to the Grandfather Mountain peaks his family owned, inspired preservationists to shore up the Cape Hatteras Lighthouse, and motivated schoolchildren to save dimes to permanently dock the North Carolina in Wilmington.

When Morton argued that building the Blue Ridge Parkway using the proposed high route across Grandfather’s face would be like taking a switchblade to the Mona Lisa, his cover shots for The State helped make his case.

To curate the exhibit, Stephen J. Fletcher, photographic archivist for the North Carolina Collection at UNC Chapel Hill, had to whittle down 250,000 images to fewer than 100, a task akin to choosing the best dozen seashells from the entire North Carolina coastline. 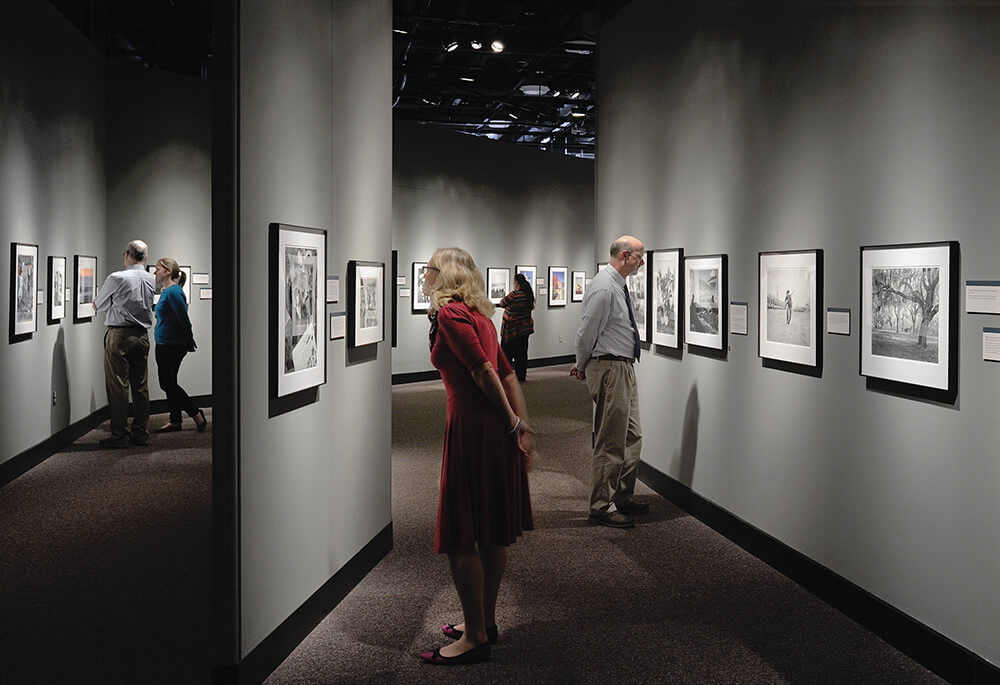 He selected scenes that Morton photographed either often or rarely, and he paged through various sources, including decades of issues of The State, choosing seldom-seen glimpses of familiar subjects.

“What I didn’t want to do,” Fletcher says, “was make the equivalent of Morton’s book and attach it to the wall.”

Following Morton’s lens through the exhibit shows off both his photographic eye and his biography: At the same time Morton was shooting Grandfather Mountain, he was working to save it from development. When he photographed the USS North Carolina, he was capping off work to preserve it as a coastal monument. And while he documented the Cherokee, he was drawing tourists to the Smokies.

“Morton photographed so many things well,” Fletcher says. “He didn’t specialize. He wasn’t just a photojournalist, a publicist, or a nature and landscape photographer. He was, simply, a photographer.”

Start at one end of the museum’s Morton collection, and the eye directing the camera belongs to a teenage boy steeped in campfire stories. A few steps farther along, it is the eye of a soldier in World War II, wounded but saved by the camera blocking his face.

As a life’s work rolls out along the wall, it shows the eye of one of the world’s most avid UNC fans, a savior of battleships and lighthouses, a North Carolina booster who stopped and documented many festivals inside its borders — and we see the state over seven decades, preserved forever.