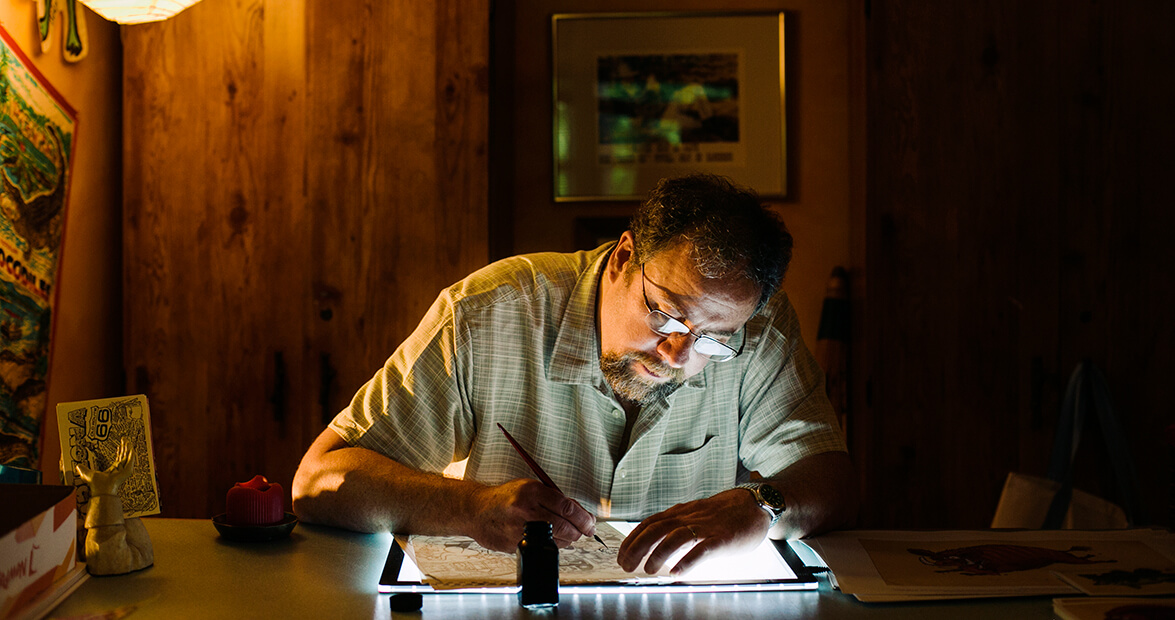 The funniest man in Asheboro doesn’t tell jokes. He draws them.

On the drafting table in Rich Powell’s basement studio is a sketch of an old, bald man with age spots instead of hair, sitting in a fancy restaurant, with a martini in his hand and a cigar in his mouth. He’s pointing to another table, and saying to a waiter, “I’ll have what that guy there is having. Bring me his wife, too.” On another table is a copy of Highlights magazine, open to a page with a spot illustration of an onion wearing boxing gloves.

And sometimes, it’s a gorilla in swim trunks.

From spaceships for computer games, logos, yokels, and cute puppies to bachelorette party cards, Powell has displayed his artistic skills to many endeavors — some serious, but mostly with his signature exaggerated sense of humor.

When Powell was a kid, his parents had collections of The New Yorker from the ’30s and ’40s. “I’d read those like the Bible,” he says. “That’s how I learned history. I’d see a cartoon about a guy hoarding tires and ask, ‘What’s this guy doing?’”

And he drew, mostly drawings of people having exaggerated accidents. “My high school teacher worried about me so much,” he says.

Powell’s foot-in-the-door moment was Mad magazine — the iconic humor publication that’s been around since 1952. If you haven’t cracked open an issue of Mad — with the wordless comic strip Spy vs. Spy, which Antonio Prohías drew for more than 25 years; Al Jaffee’s back-page “Fold-Ins,” which lampoon Playboy’s centerfold; and parodies of popular movies and TV shows — you’ve at least seen the signature cover with the jug-eared, freckle-faced mascot, Alfred E. Neuman. Despite competition from Cracked, Crazy, and National Lampoon, Mad has outlived all of them.

“It’s so damn fun,” Powell says. “There’s nothing like it. It has a loyal readership of guys who grew up with it. It’s still kind of countercultural, in a way.

“You don’t get rich or anything, but you get to say, ‘I’m a Mad artist.’ It still impresses people.”

Powell’s most recent Mad spread included 18 drawings of Star Wars fans, then and now (from adoring to complaining), featuring his exaggerated takes on Yoda and Harrison Ford. 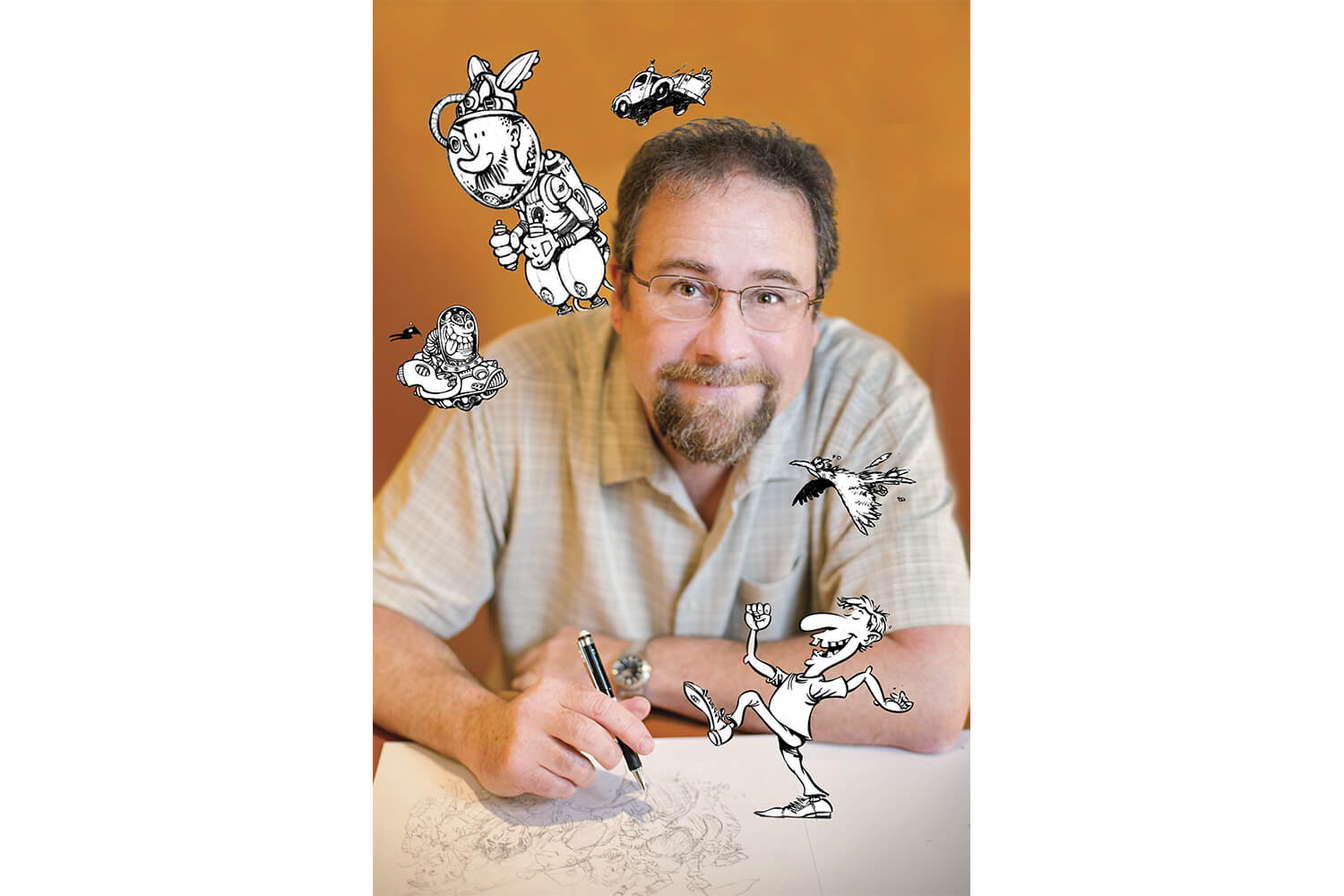 When Powell isn’t getting “mad,” he’s working on his single-panel strip, Wide Open, which earned a nomination for the National Cartoonists Society’s Silver Reuben — one of the top awards in the profession.

The comic originated as Dixie Drive, which was inspired by his current hometown, Asheboro, or, more particularly, his coffee klatch, which met daily at the shuttered Ginger Bread House pastry shop.

“I’d have coffee with those guys every morning,” he says. “They’d tell stories about when they were kids with all those funny quirks. ‘We all smoked rabbit tobacco as kids.’ ‘My grandfather thought kerosene cured everything.’ I found that North Carolinians really enjoy poking fun at themselves.”

Powell changed the name of the comic once it went national, finding that country humor is translatable all over the place. While Dixie Drive featured persimmon pudding and pollen jokes, Wide Open has dogs singing the “Cat Chaser Blues” and parent zombies lamenting the fast-paced lives of zombie youth: “Doesn’t anybody shamble anymore?”

Powell always has a new project on his table. He’s just finished illustrating a joke book called Animal Crackups for Highlights, and he draws far-out fish for greeting cards, Playboy.com, and T-shirt logos. “In the same day, I’ll go from drawing a cute butterfly under a leaf umbrella to some guy vomiting blood,” he says. “And then I’ll design a logo, which is a completely different part of your brain.”

His next assignment? An illustrated version of Andy Griffith’s “What It Was, Was Football” for the anniversary of its recording, November 14, 1953. Griffith’s hilarious monologue will become a segment on UNC-TV’s Our State that will show Powell working on the illustrations. It’s another way of staying versatile in a world that doesn’t necessarily cater to cartoons.

But there’ll always be a home — and a giggle — for pugilistic produce.