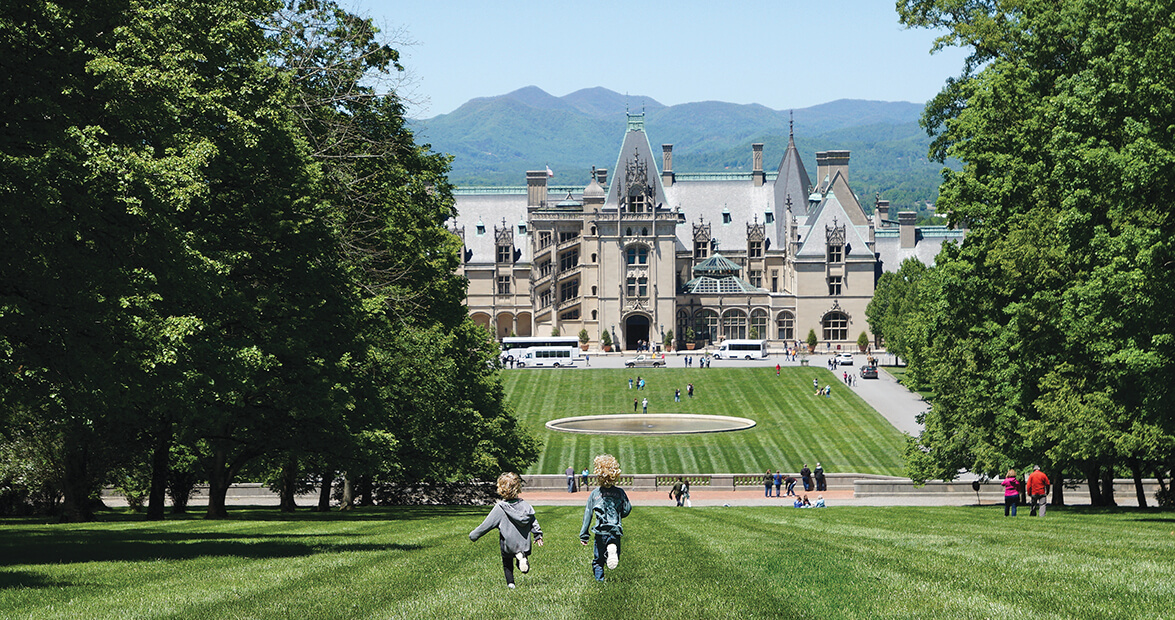 Here’s the image I can’t get out of my head: 26-year-old George Vanderbilt, in Asheville so that his ailing mother can breathe what the city was touting as the cleanest air in the country, rambles out on horseback in the spring of 1888. He stops on a rise that offers a panoramic view from Mount Mitchell to Mount Pisgah to the Blue Ridge. The land, frankly, is a mess: It’s been so over-farmed and over-logged that not much is left beyond scrub, fallow fields, and junk trees. Vanderbilt, though, sees possibility. Or maybe what he sees is the impossible. He takes a deep breath of that clean air, and he thinks, “We could do this.”

The “we” in question: Vanderbilt himself, the architect Richard Morris Hunt, who’d designed what was then the tallest building in the world (the New York Tribune building), and Frederick Law Olmsted, America’s preeminent landscape architect. And the “this”? Why, nothing less than the construction of what would become America’s largest private residence, a 175,000-square-foot château on, at one point, 125,000 acres of land. The undertaking would grow so colossal that it one day would sustain its own village, reinvent tourism in the Land of the Sky, and become the birthplace of American forestry.

About all of this my boys care not at all. They want to run. They were wound springs on the shuttle ride up Olmsted’s immaculate three-mile approach road, and now they’re loose, running toward what our driver cheekily called “George Vanderbilt’s little cottage in the woods.” Little cottage: The thing, in person, defies scale and expectation, logic and even common sense. It’s got 35 bedrooms. I’m not certain I know 35 people. I certainly don’t know 35 people well enough to have them spend the night. As the kids stretch away from us along the esplanade, it does cross my mind that we might have made an error here: We’ve brought two boys under the age of 7 to an estate with formal, walled gardens and a residence (castle?) that’s been converted into a massive do-not-touch-anything-ever museum. My kids are not much for quiet contemplation. They touch everything. But who knows? Perhaps they harbor an as-yet-undiscovered passion for French Renaissance architecture writ very, very large.

As it happens, the kids have an as-yet-undiscovered passion for audio tours. “DADDY, YOU JUST PRESS THE NUMBER OF THE ROOM,” my 4-year-old tells — well, everyone. We learn that you can seat a cast of dozens in the formal dining room. We learn of a Renoir (or two?) in the breakfast room. We learn about the single bolt holding the three-story chandelier in place, and of the cantilevered triumph of the Grand Staircase. My older son gapes at George Vanderbilt’s red-velvet bedroom: “Mr. Vanderbilt’s bed has a roof,” he says.

I’m gaping, too — at the whole thing, all of it. What would it be like to raise a family here? That’s what I was thinking outside, as we chased the boys through an actual glass greenhouse beyond the rose garden, and it’s what I was thinking just inside the front door, as we stood in the great glass atrium/entrance hall/H.G. Wellsian time machine that announces that you’re very much in some other land altogether. All this glass and gold, all these rooms, all these corridors.

Cornelia Vanderbilt was born here in 1900, and it’s not hard to imagine her, two or three years later, running wide open from room to room until — until she got lost half a mile away, still inside the house? Outside, in the gardens, I could not wrap my head around what Vanderbilt had done here — even if there’s a kind of sympathy to the excess, to the way, even, that the house hunkers on the land, if a thing so large can hunker. He imagined himself a kind of steamship here, a luxury liner. Then he built it. This is what happens when the answer to every conceivable question — Could we have a bowling alley? Would it be possible to plant three million trees in 10 years? Will we need our own farm to make this thing work? Do we need a rotisserie kitchen and a regular kitchen? — is yes. Is this the grand exemplar opposite of the way I parent my children, always, or almost always, telling them no?

We lose the little one in the Music Room on the first floor; a kind docent finds him behind the drapes and returns him. Both boys try to climb into two small matching beds in one of the endless guest rooms on the second floor; a kind docent puts a stop to that, too. One of them hatches a plan about utilizing one of the 43 original, roped-off bathrooms, but their mother threatens them with bodily harm, and then bribes them with candy.

They fall finally and completely apart, then, in the basement, somewhere between the several pantries, the servants’ quarters, the various laundry rooms, the swimming pool, and the gymnasium. By the time the tour tracks us through the Bachelors’ Wing, with its wood-paneled Billiard Room and Smoking Room, I find myself counting good places where one might sit and sip a very stiff cocktail — alone. “Mr. Vanderbilt liked to enjoy a cigarette in the evenings,” the audio tour handset says. I’m holding the handset now. My kids are lying down on the actual floor.

We finally make it outside again, back up to the hill above the terrace, and we refuel the children on gift-shop taffy, and soon enough all is right with the world. “It is a great work of peace we are engaged in,” Olmsted said, meaning the design of the sprawling grounds, the reclamation of an entire forest. He must not, then, have imagined my boys roaming it a century-and-change later. Or maybe he did: He’d have known Cornelia, would have heard of birthday parties with live birds in cages as favors, would have seen her running these same slopes with any number of massive Saint Bernards. Maybe we should find some way to take a cue from this place, I tell my wife. I don’t mean that we should plate our roof spires with gold, or that we need a rose garden, or even a single rose. But perhaps we could say yes a little more often. That’s what I’ve been telling you all along, she says, smiling and taking my hand, and the boys run, full out, down the hill.