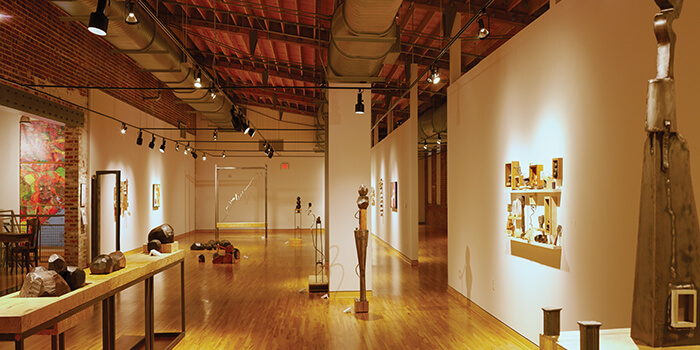 We know where the people, and the products, went. The people moved or died or found other jobs. The products were spun or woven or rolled or sealed into something you wore or smoked or spat. But you have to wonder where the machinery — looms, processors, the unimaginably deafening equipment — of manufacture went. Now, in at least one present incarnation, the rooms are spare, silent, serene inside a once clacketing, racketing mill.

From outside, it still looks like a mill, a really, really big one, with its irregular rooflines and Lego-looking, low-slung additions, and chimney and steel conveyor. The builders of these buildings, dating from 1903 to 1923, weren’t messing around. They were constructing a version of Medieval Romanesque architecture based on European fortresses built in the 9th and 10th centuries. And the mill had a big name to go with it, too: the Imperial Tobacco Company of Great Britain and Ireland. 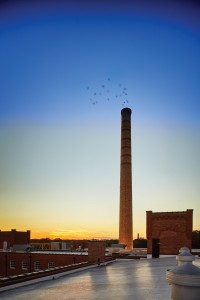 You’re going to need a map to tell the scale room from the boiler house, the stemming machine room from the cooperage shop. Don’t worry; Rocky Mount’s Imperial Centre for the Arts and Sciences provides maps in the foyer of this grand old lady made even grander by its reformation as a spectacular arts center containing a digital planetarium, live animal gallery, café, shop, theater, and numerous permanent and changing galleries. Immense black steel doors, whose raised lettering reads Erie City Iron Works, Erie PA USA, loom overhead in an atrium with 25-foot ceilings, though in the same room, an original arched doorway is a mere head-bumping 5 feet and 6 inches high. Brick pavers honor donors, as do benches and galleries and fountains. Lest one forget origins, the Universal Leaf Tobacco History Room is adorned with a silvery metal gate and rail of tobacco leaves by Greensboro sculptor Jim Gallucci. Not that you could forget: The mill’s chimney rises — immense, impressive — from the middle of the room.

I’m looking for the support beams.

After Hurricane Floyd in 1999, Centura Bank and other community leaders planned the restoration (“adaptive re-use” is a phrase on a plaque, and an apt term) of the abandoned Imperial Tobacco Company mill. The feel of the original industrial design is still present in its new guise, with steps constructed of I-beams and wooden planks; in the spacious galleries, with visible duct-work; in the huge bolted metal supports shoring up entranceways; in the suspended track lighting that illuminates a juried art show. The new spaces, with shining floors, carry that lovely hushed feel of museums, or magazine photos of urban lofts. The Student Gallery features blackboards, canvas-covered paint tables, and a mini-stage complete with spotlights and curtain and five theater seats I’d have loved when I was pretending to be Jane Banks meeting Mary Poppins.

But I’m still looking for the beams. They have to be here — just like the railroad tracks — somewhere near the upstairs bridge overlooking the boiler room, beneath original corrugated tin roofs, the odd, unexplained niche in the wall, and the ubiquitous arched windows, these covered in a material that allows diffused, unobtrusive light for the paintings and sculptures.

And there they are, running the length of the N.C. Collection, embedded in the walls behind the glass cases displaying Samantha Henneke’s Red Weevil Mushroom Jar and Ben Owen’s Jugtown pottery. There they are in the museum store, as well, where the clerk informs me that they’re beveled because beveled edges retard the spread of fire — that constant threat — and that the foot-high, perforated concrete bases around the beams aren’t for sturdiness, but to deter termites.

Which reminds me: the fire doors. They must be here somewhere, too. And I find those, as well, the size of this mill necessitating a trio of the sliding steel doors.

Consistency is a comfort.