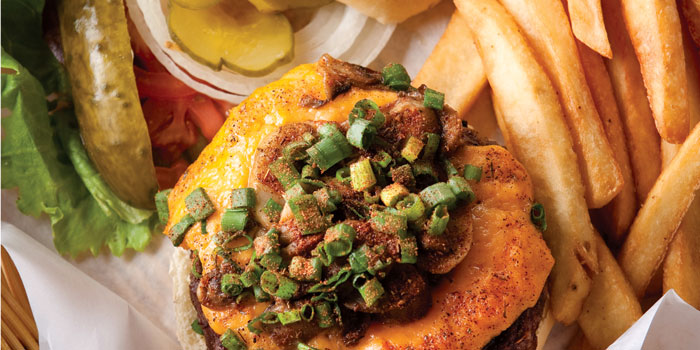 When you drop by Jimmy Mac’s in downtown Bryson City, don’t be surprised if your greeter is two and a half feet tall and 3 years old. “Come with me,” Katelyn McNorrill says, handing customers a menu and flashing a grin that stretches from one little pink ear to the other.

“She’s the third generation,” says James McNorrill III — Little Jimmy to most people. “A year ago, when she was 2, she knew if she saw four heads that they wouldn’t fit at one of the booths, and she’d take them to one of our bigger tables.”

Jimmy Mac’s Restaurant — famous in these parts for its list of 20 burgers on the menu — is a dream come true for the 31-year-old McNorrill. “When I was 4 or 5 years old,” he says, “we’d come up here and go eat at this restaurant across the creek in this old run-down cabin, and I told my grandma and my mother and my dad, ‘One day, I’m going to run a restaurant up here.’”

Perfection on a bun

McNorrill got here about five years ago, after his dad, James “Big Jimmy” McNorrill Jr., decided to open another restaurant. Little Jimmy came here to help him out.

Located in what was once the old post office, Jimmy Mac’s continues a family tradition of serving award-winning burgers. Little Jimmy and his father ran several restaurants in Tampa, Florida, before Big Jimmy and his wife, Betty, sold the family restaurants there and moved to North Carolina. Rave reviews of Jimmy Mac’s predecessors adorn the walls. “Best burger in Florida,” one commentary says.

Eat one of Jimmy Mac’s creations, and you’re not inclined to argue. The two-fisted, juicy gourmet burgers are some of the best on the planet. Take the Bleu Max — a softball-size burger, seared to medium-rare juiciness, sandwiched on a fresh-baked bun; it’s got enough bleu cheese and bacon on it to make a second sandwich.

Whether it’s the Minnesota Fats with mushroom gravy, sour cream, and sauteed onions or the Cheese, Cheese, Cheese Burger with mozzarella, cheddar, and swiss, Jimmy Mac’s burgers are not for the timid but promise satisfaction across a spectrum of tastes. And beef patties aren’t the only option — all 20 variations can dress up buffalo burgers, elk burgers, and even veggie burgers.

“I’ve had all 20,” says Brad Walker, the city’s mayor. And 20’s not enough. Sometimes, he goes off the menu and creates number 21 or 22 or 23. “They’ll fix them any way you want them, and I’ve eaten the Bigger Mac,” he says, referring to the massive one-pounder. “I’m a simple person, and I like simple food and a simple atmosphere.”

Big Jimmy started the original Jimmy Mac’s in Florida in 1974. Back then, he didn’t know better than to pay a premium for USDA Choice chuck: “I was 24, and I had never worked in a restaurant in my life.” Customers loved his hand-patted burgers, and now he knows better than to use anything but top-choice ingredients. His restaurant thrived, and over the next three decades, Big Jimmy operated a half-dozen other restaurants, including a seafood place that seated 350.

Ask Little Jimmy how long he’s worked in his dad’s restaurants, and he’ll tell you, “since birth. … I was in one of those little chairs swinging back and forth and watching them.”

Working shoulder-to-shoulder, father and son made each venture into a Tampa institution, but as development soared in the Sunshine State, Big Jimmy sold his Florida holdings. “We moved out of Tampa before the market crashed,” he says. “We were just lucky, not smart.”

But that left his son without a workplace — which at the time was OK by Little Jimmy, who sometimes chafed under his dad’s supervision. “My dad is very detail oriented,” he says. The lettuce garnish must be shiny-side up. The presentation of burgers involves a splaying of the lettuce, tomato, and onion “like a deck of cards with the pickle spear on top,” he says. “I always wanted to know why it had to be that way or this way.”

Big Jimmy has his reasons. “We were always getting into it, but when the day was over, so was the argument,” he says.
Even so, the son welcomed a chance to prove himself and went to work for the Bob Evans chain. He quickly moved up through the ranks and became an assistant general manager and made his dad proud.

Meanwhile, the elder McNorrill and his wife, Betty, moved to Bryson City and began fixing up rental properties when, one day, Big Jimmy went for lunch. Nearby was the Family Restaurant’s walk-up window with its yellowed menu board with the classic Coke logo and a decor that was virtually unchanged since it was founded as Ma Barker’s decades earlier. “He went to get a hot dog,” Betty says, “and he came back and said he was going to buy [that] restaurant.”

The idea was to lure Little Jimmy, who was talking about getting married, up to the mountains. “Kim and I were engaged,” the younger McNorrill says, “and Dad maybe thought I was calming down a little bit.”

Jimmy Mac’s opened in July 2006, and it’s been a family enterprise ever since. The younger McNorrills work at night while the grandparents watch Katelyn. During the day, the couples switch roles. When you run a restaurant, Little Jimmy says, “you don’t get out much.”

Customers become your extended family. Such as Bruce Cole, a Bryson City native who helped build a number of the bridges that span Interstate 40 for Taylor & Murphy Construction. Cole says word of mouth convinced him to sample the restaurant’s signature burgers. He loves them and has tried almost every one.

Coming from a family of five boys and three girls, Cole says Jimmy Mac’s family atmosphere also makes him feel at home. He’s not the only local who has embraced the McNorrills as his own.

When Katelyn was born, customers showered Little Jimmy and Kim with gifts, including a handmade Winnie the Pooh quilt. The couple was overwhelmed.

“You wouldn’t have got that in Tampa,” Little Jimmy says.

David Bailey is a Greensboro writer obsessed with burgers, barbecue, and blue crabs.