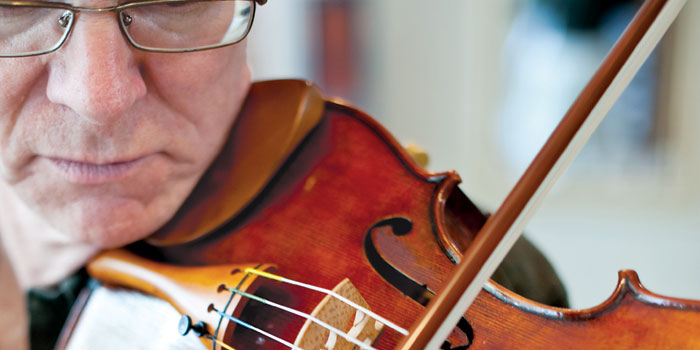 For nearly 35 years, John Montgomery has fashioned violins, violas, and cellos from his Raleigh workshop, shaping the wood with handmade planes and knives, making string quartets out of maple and spruce.

You can find his work in the hands of North Carolina Symphony musicians, or with musicians playing sonatas at the Kennedy Center in Washington, D.C. — each instrument a tree slab that Montgomery taught to sing.

On an average Thursday, he restores a cello made in 1850, its wooden parts strewn across his office like the battered components of a Model T Ford.

He mentions casually that he maintains a violin for the concertmaster of the National Symphony Orchestra, and that he counts the violinist of the Carolina Chocolate Drops among his clients. But he humbly admits that his own playing isn’t something you’d fawn over. Master craftsman by day, casual fiddler by night.

“It’s not critical to perform well,” he says. “I joke that I’m not distracted by repertoire.”

Character in the chords

Montgomery was born in California and bounced between Wisconsin, New York, Utah, and France before landing in 1983 in Raleigh, where he soon set up his landmark shop on one of the quieter blocks of Hillsborough Street.

Back then, the N.C. Symphony was small-time, compared to its modern lineup, and Raleigh’s budding musicians needed someone who knew how to make and repair things with strings.

Montgomery fit the void. His path to violin making grew out of his twin passions for music and tinkering.

He chose the cello in junior high school because it seemed like such a novelty. Then he drifted into violin a few years later, playfully fiddling along with the folk revival of the 1960s.

At the same time, he became interested in leather working, making belts, vests, and guitar straps to fit the folk mood around him.

But the key to his future appeared while at college in Wisconsin when he won a Thomas Watson Fellowship to study folk music in France. There, he fell in with a pair of brothers working outside Dijon, learning to make what may be the world’s oddest instrument: the hurdy-gurdy.

Shaped like a gourd, turned with a crank, the hurdy-gurdy is commonly associated with monkeys, who dance and beg for spare change while the music plays.

But however strange the hurdy-gurdy is to American ears, it’s a staple of French folk music, and its crank-operated wheel works much like a violin’s bow.

When Montgomery returned home, seeking his fortune, he was already on the path to making violins, a small jump from hurdy-gurdies. Two years later, he finished up at The Violin Making School of America, based in Salt Lake City, Utah, where many of the world’s best craftsmen first sharpened a knife.

Today, Montgomery and his family live within walking distance of the shop, and he splits his time between repairs, dealing in instruments and building his own. He tries to make a quartet per year: two violins, a viola, and cello.

He offers this advice to a dabbler: Sharpen your tools. Don’t be so impatient to get working that you cut with a dull knife.

Montgomery picks up a sample of maple, an unusual cut with the grain showing like the loops on a topographic map or the whorls of a fingerprint.

Before long, someone will cradle that wood against his chin, draw a bow across the strings, and coax out the music Montgomery placed inside.

Josh Shaffer is an award-winning writer for The News & Observer in Raleigh. His most recent story for Our State was “Wrightsville Beach” (July 2012).