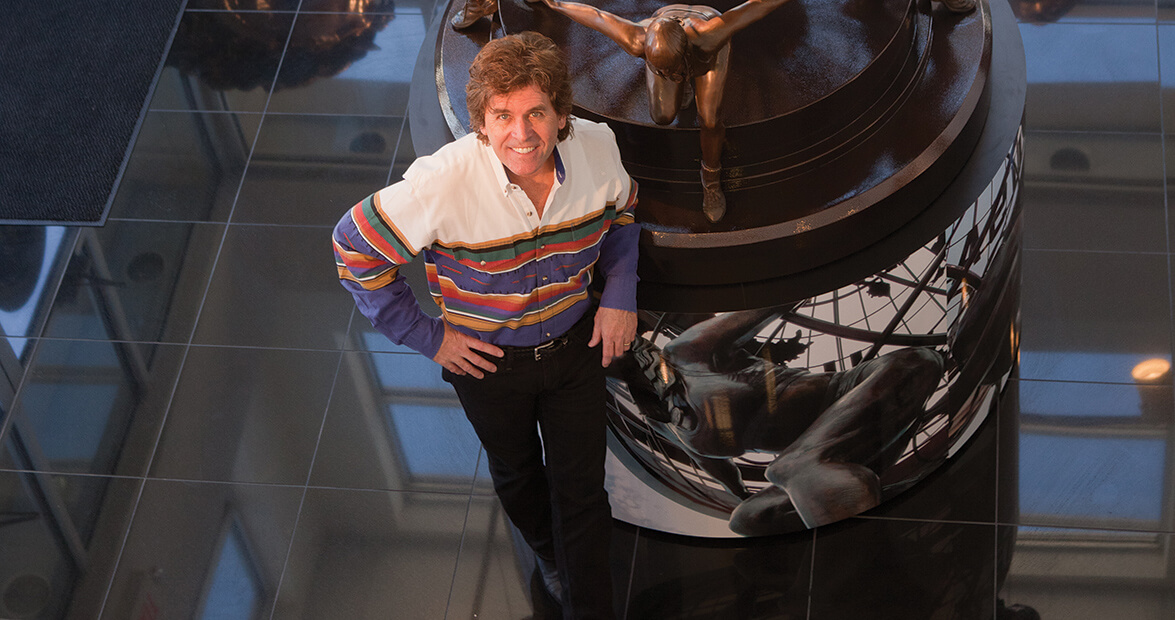 People ask Jon Hair why he started so big when he took up sculpting more than 10 years ago. Wouldn’t it have made more sense to start small, get a handle on the medium, and work his way up to colossal creations?

Born in Cedar Rapids, Iowa, in 1949, Hair doesn’t remember not being an artist.

When he was in kindergarten, his teacher took down the alphabet cards above the blackboard and replaced them with his drawings. She changed them out every week.

“As far back as I can remember, all I did was draw, draw, draw,” Hair says. Today, he sculpts.

Within a 7,500-square-foot space in a Cornelius business park just north of Charlotte, Hair creates monumental sculptures of people, creatures, and mascots that elicit gasps of awe for their detail and for their size — his largest piece so far stands 35 feet tall.

A life-size Mark Twain, Marie Curie, Thomas Jefferson, and George Washington sit on a bench together in his studio, while Leonardo da Vinci, Martin Luther King Jr., and Rosa Parks share another bench across the room. Above them, an eagle soars and a marlin dives, while a lion larger than an elephant stands nearby in a regal pose alongside Mother Teresa.

Wearing black jeans, black boots, and a button-down shirt, Hair has the physique of a fit twenty-something. His disheveled hair and ocean-blue eyes add to his Hollywood good looks. He walks around the showroom of his studio with the excited gait of a child showing off his toys.

“My dream project is to do the largest bronze sculpture in the world,” Hair says. “It’s going to have to be a couple hundred feet tall.”

To some, that might seem a bit ambitious, but if you spend any time with Hair, you’ll discover that nothing seems beyond his reach.

Admittedly a competitive guy, Hair remembers breaking the bank every week in Monopoly at the orphanage where he and his two brothers lived for a short while. One of six children, Hair describes his childhood as very tough. At one point, his family lived in the basement of a one-room schoolhouse with no indoor plumbing. His parents divorced when he was young, and for several years, he moved back and forth between his mother, who lived in Florida, and his dad in Ohio.

As a little boy, he learned to play poker from his grandfather, and today, he competes in poker tournaments every chance he gets. (He’s sculpted some of the best players in the professional poker-playing world, such as Doyle Brunson and Annie Duke.)

Despite the tough childhood — or maybe because of it — Hair remembers himself as a confident kid. Once, he spotted a drum in a music store window. He went inside and asked how much it was. The guy told him he could rent it for $2 a month.

“I said, ‘I don’t have any money, but I’m an artist, and I could paint a sign on your window … if you’ll trade me out for a couple of months of renting the drum,’” Hair says.

Drums took Hair to New York City the summer he was 16 and to a recording session with Paul Simon and Art Garfunkel. His band, The Clefs of Lavender Hill, was in town recording with Date Records, a CBS subsidiary label. Simon & Garfunkel recorded on Columbia Records, CBS’s signature label. Both groups had the same A&R man (artists & repertoire), who had Hair help the famous duo with the drum part in the song “At the Zoo.” During that same summer, Hair jammed with Jimi Hendrix.

Despite those highlights, Hair grew disenchanted with the music business and in the fall, headed home to his dad’s place in Ohio to finish high school and then go on to college, where he studied fine arts. A red drum set still sits in a corner of his office, beside a guitar that used to belong to Bruce Springsteen.

For 25 years, Hair made his living in advertising. He and his wife, Patricia, moved to North Carolina in 1980 when he landed a senior art director position at a regional agency in Charlotte. He designed the logo for the Charlotte Convention and Visitors Bureau that hung at Charlotte Douglas International Airport until last year. Today, it hangs on the wall in Hair’s studio near big, blue letters that spell out “Think Big.”

Hair was thinking big long before he discovered sculpting.

When he went to a drum audition during college and the band said they’d already found the drummer, Hair marched on stage, played a five-minute set, and got the job. When management laid off four of the nine art directors at the agency where he worked in Akron, Ohio, Hair asked for a raise — and got it. When he decided to open his own design firm in 1988, he soon had regular work from First Union, IBM, and Husqvarna.

He enjoyed almost too much success. “I was running back from one meeting to the next. I had my own little boutique agency, and I was the only guy,” Hair says. “I was kind of burning myself out.”

He started to consider a career change and sat down with his wife to share his thoughts. “I said, ‘I’ve got to tell you that my whole life I’ve had this thing that’s inside of me. It’s like this beast that wants to get out.’ I said, ‘You know, I’m thinking about letting it out,’” Hair recalls.

“She asked, ‘Why haven’t you let it out before?’ I said, ‘Well, because I’m a father. I’m a husband. That’s the most important thing to me — my family.’” Hair has two sons and a daughter, now grown. Jason and Mike work for him, and so did Vanessa before she took a job with Bank of America.

About 10 years after launching his design business, Hair started getting to know his inner beast. Did it crave expression through art? Or maybe music?

“Well, you can’t make a living doing music in Charlotte, so my wife and I took a year and went around to art shows,” Hair says. “I saw a guy doing sculpture, and that was it.”

When a space across the hall from his design business came up for lease, Hair rented it. He bought top-flight supplies and every book he could find on sculpting.

“Then, after the kids were in bed, and everybody’s homework was done, everybody was tucked in and everything, well, Dad would go over and start sculpting at about 10 at night,” Hair says. “And I would work over there till like 2 or 3 in the morning.”

Before long, Hair found himself sculpting full time and doing less and less graphic design. He secured his first major commission at Miccosukee Resort and Gaming in Miami, Florida, after sitting in the waiting room for an entire week hoping for a few minutes to pitch his idea to the chairman. Two days after his initial meeting with the chairman, he came home with a commission and a check for $110,000. His Miccosukee Boy with Egrets, which stands at the entrance to the Florida resort, was one of his first large pieces.

Today, many of his clients are colleges and universities. A copy of Lucky Eight, the abstract piece he did for the 2008 Olympic Games in Beijing, sits beside the library at Appalachian State University, while Rex, the largest standing bronze lion sculpture in the world, resides on the Queens University of Charlotte campus. In addition, Hair has 21 sculptures on High Point University’s campus, including a series of historic figures such as Abraham Lincoln, Leonardo da Vinci, and Sacajawea.

Hair acknowledges that a good business sense has helped him accomplish so much in such a short time. He spends as much time pitching new business as he does sculpting and makes a good living. But money is not what drives Hair. He sculpts to grab the imagination, to stir emotion.

“I want to create magnificent, monumental figurative sculpture, which has the ability to overpower us and inspire in us a sense of awe,” Hair says with the conviction of a minister. He points to his inspirations — Michelangelo, Bernini, and Rembrandt.

“Their work excites me,” he says. “I go to Rome and see the Trevi Fountain; I just go crazy. That thing is so magnificent.”

Hair aspires to nothing less. So, he has no time to waste. As long as he’s able, he’ll continue to think big and to let the beast reign.

“I’m not going to quit,” Hair says. “I’m like Charlton Heston. You’ll have to pry my sculpting tools from my cold, dead hands — along with my drumsticks.”