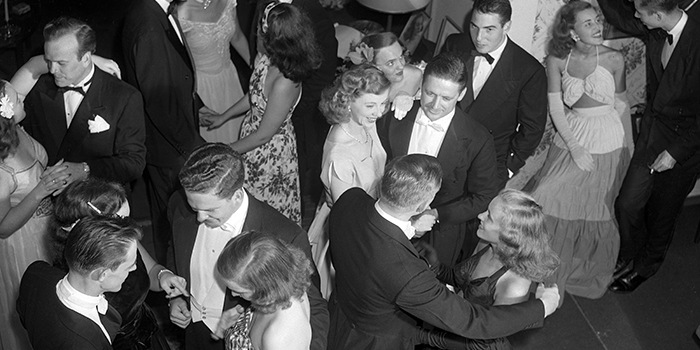 She’s 82 now, but when Billie Jo Matthews was a young woman in the 1950s, she and her generation loved nothing more than to dance the night away.

Matthews, who has lived in Rocky Mount all her life and lives there still, remembers going to elaborate dances known as June Germans, at which big bands — often well-known groups featuring the likes of Tommy and Jimmy Dorsey, Artie Shaw, Count Basie, and Rocky Mount’s own Kay Kyser — would begin playing sometime after midnight and keep going until 6 o’clock in the morning.

“Those were fun times, wonderful times,” Matthews recalls. “We would dance until the sun came up — if you could last that long.”

And was she able to last that long?

“Oh, yes,” she says with a coy giggle. “We always stayed till morning.”

Some six decades later, June Germans have long since disappeared from the eastern North Carolina social scene they once dominated — even the phrase “June German” seems to be vanishing from our vocabulary these days — but in their heyday, the formal, all-night dances were big news, and not just in North Carolina. Nationally known publications including Life and Parade magazines, The New York Times, and The Saturday Evening Post covered the June Germans.

In “Life Goes to a Party,” a multipage photo essay in 1937, Life magazine told the nation, “Every June since 1880, the Carolina Cotillion Club has given a German which provides fun and frolic for thousands of Carolinians, makes the thriving tobacco town of Rocky Mount, N.C. a cynosure for invited guests from many another State.”

The history of June Germans actually can be traced all the way back to September of 1870, when Rocky Mount hosted a “Grand Celebration Ball,” which was an extravagant dance to which they invited friends from neighboring counties. It was such a success that organizers decided to make such dances an annual event for out-of-town friends, and a tradition was born.

As for that unusual name — the “June Germans” — it came along a little later, but you have to go back to those early days to understand where it came from. By the mid-1880s, the dance was being sponsored by the Queen City German Club — a “german” being a popular form of social dancing. The Queen City German Club eventually became the Queen City Cotillion Club and later the Carolina Cotillion Club, but organizers held fast to the dance being known as a German. The dance was moved to June, and in 1903 the club officially began calling it the annual June German.

The June Germans traditionally were held on Friday nights in tobacco warehouses, temporarily shifting those buildings’ usefulness from the economically important tobacco industry to the community’s social scene. The old warehouses made for some steamy, stifling dance halls — just what you would expect from a facility with no air-conditioning in the heat of an eastern North Carolina summer — but they were always gaily decorated for the festive dances and often included elaborate banquets during the June Germans’ early years. Brightly colored streamers and balloons hanging from the ceiling — as well as elegant banquet tables filled with a feast — turned even the drabbest of warehouses into grand ballrooms. Professional decorating companies were often brought in to handle the decorations.

When The Saturday Evening Post covered one of the Germans, the writer gushed that the tobacco warehouse had been “transformed for the night … into a sufficiently satisfactory Southern version of wonderland.” 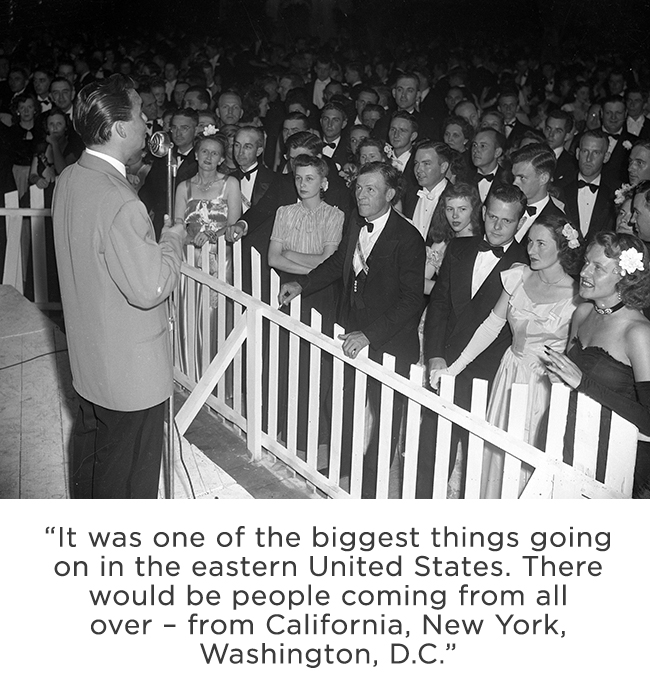 An evening in Rocky Mount 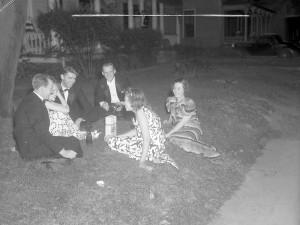 According to a July 1937 issue of Life, the days leading up to a June German were devoted to perfecting appearances, which became less important as the night, and the dancing, wore on. photograph by N.C. Archives

Perhaps the most amazing thing about the Germans, though, was the bands that played at the dances. For a small town that was otherwise known mostly for tobacco, cotton, and lumber mills, Rocky Mount attracted an awfully impressive list of big bands — a testament to the immense popularity of the dances. 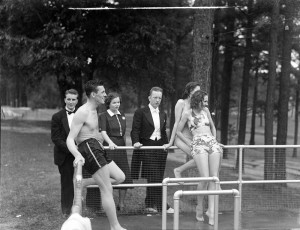 Although the dance was “officially over at 5:15 a.m.,” Life wrote, “swimming, high jinks at the country club and barbecues rounded out the gala weekend.” photograph by N.C. Archives

“All of the bands were well-known at the time,” Matthews recalls. “Sometimes you would have a couple of bands that would start earlier in the evening, and then the big band would come on later and play all night, till 6 o’clock in the morning. It was one of the biggest things going in the eastern United States. There would be people coming from all over — from California, New York, Washington, D.C.”

Generally speaking, the June Germans were regarded as high-society affairs for the white community, and those who attended dressed to the nines for the black-tie dances, the men in tuxedos and the women in fancy ball gowns. The galas were so elaborate that many people bought tickets just to watch the festivities and not even dance. In 1937, for example — the year Life magazine covered the June German — the event was attended by some 8,000 guests and another 3,000 spectators.

Just how appealing were the June Germans? Well, consider this: Matthews recalls that one year Smithfield native Ava Gardner, one of the hottest actresses in Hollywood, showed up for the June German as a visitor’s date. She could’ve been wining and dining anywhere she wanted, but she spent the evening in Rocky Mount.

Matthews also remembers another pretty important figure from one of the June Germans — Tom H. Matthews, the man who eventually would become her husband.

“I knew his family,” she says. “He called me and asked me to go to the dance with a friend of his from Charlotte, so we all went together, and I ended up dating this other guy for about a year. I really liked Tom more, but he wasn’t going to ask me out while I was dating his friend. Then, after I broke up with him, Tom and I started dating and ended up getting married.”

And it all started at a June German, the high-society highlight of the year in Rocky Mount and other towns in the eastern part of the state.

One other unique aspect of the June Germans was how their popularity crossed over to the town’s African-American population. Beginning in 1917, a second June German — sometimes referred to as “the colored June German” — was held on the Monday after the traditional dance was held on Friday night. Same warehouse. Same decorations.

And, apparently, same appeal to big-name musicians. Advertisements from old issues of the Rocky Mount Telegram indicate just how big the names were — Count Basie, for example, in 1940, and Louis Armstrong in 1945. Others included the likes of Buddy Johnson and Roy Eldridge, both of whom enjoyed immense popularity during America’s big band era, as well as Ella Fitzgerald and Billy Eckstein.

The black community’s June German eventually became an entity unto itself, separate from — and ultimately larger than — the original June German. In 1949, when Count Basie headlined the event, it drew an astounding 24,000-plus dancers and spectators.

Just as the original June Germans attracted attention from national media, so did the June Germans held for the African-American population, most notably from such well-known, historically black newspapers as the Baltimore Afro-American and the Atlanta Daily World.

Here’s another hint at the cultural significance of the African-American community’s June German: When Buddy Johnson was chosen to headline the event, the Baltimore Afro-American declared him “the No. 1 name band leader of 1949, for the assignment goes each year to the band that is considered the greatest dance attraction.”

After experiencing a lull in the 1960s and a revival in 1976, the June Germans — which once had attracted thousands of dancers and spectators — began to die out, a result of changing times and traditions. Nonetheless, the dances made a lasting impression on those who were fortunate enough to experience them.

“They were just so much fun,” Matthews recalls. “Those were some of the best times of my life.”