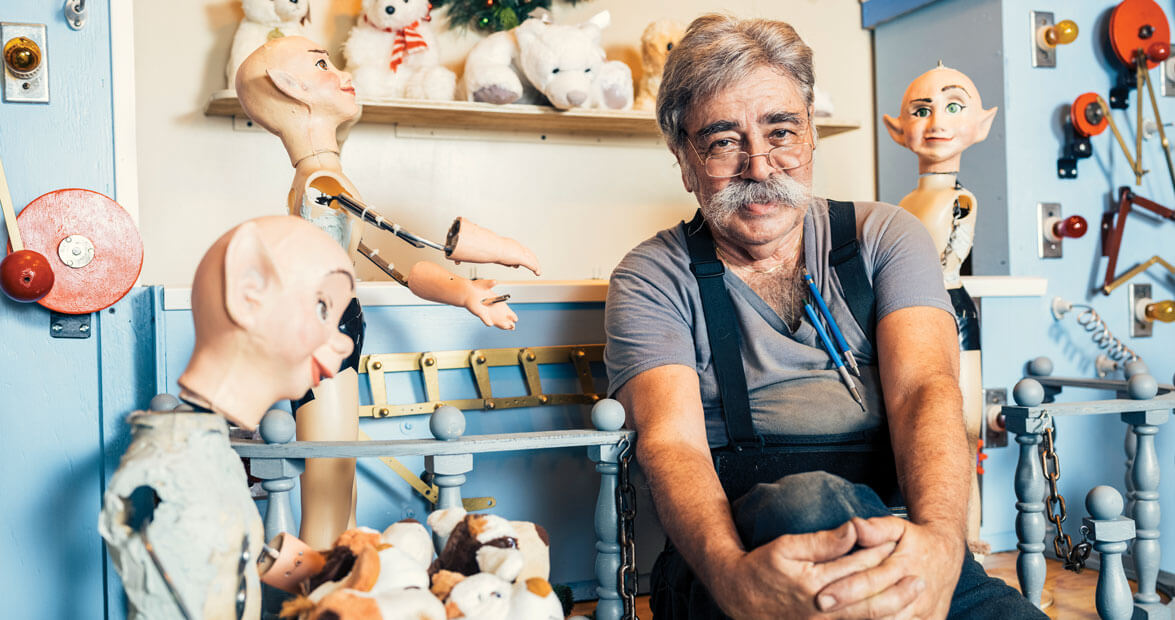 Denise Barnes got teary the moment she laid eyes on the dusty old mechanical elves. The last time she’d seen them was a half-century earlier, when the elves were cheerfully working in Santa’s Workshop in the windows of the Hudson Belk department store in downtown Thomasville. Barnes was a smitten little girl then, with her nose pressed against the plate-glass window. “That was always one of my favorite things about Christmas growing up here,” she recalls. “It was a wonderful tradition for people to take their children to see those window displays. I wanted to go back every night as long as they were up.”

But time had not been kind to the Thomasville elves. Dingy from decades of neglect, their motors had rusted, and their inner components reeked of dry rot. For nearly two decades, the elves had been boxed up: first, in a hot, dry attic, and later, in a dank, musty maintenance building downtown. When a colleague from the Thomasville Beautification Committee, Carol Brown, took Barnes to see what had become of them, Barnes, ever hopeful, asked, “Do they work?”

The two women plugged in the six aging elves and six other Christmas characters, one at a time, and waited. Barnes teared up again as she saw what Brown already knew — the elves couldn’t be salvaged. Even the few that still worked seemed to groan as they slowly and painfully whirred to life. “We’ve tried to find people to work on them,” Brown explained to her. “But nobody will touch them. And we don’t know where else to look.”

Barnes didn’t know where else to look, either, and resigned herself to the elves’ probable fate. Then, one Sunday morning last January, she happened to catch a TV segment about a New York toymaker known as “the Geppetto of Brooklyn.” His workshop overflowed with mechanical Christmas toys — talking and singing dolls wishing visitors a merry Christmas — just like the ones from the old Belk windows. Within minutes, she texted the video to members of the Beautification Committee. “You’re not gonna believe this!” she wrote. “You’ve got to watch this story.”

Christmas window displays, a staple of department store shopping for generations, still delight children and dazzle those who recall their splendor from long ago. The tradition has its deepest roots in New York City, where Macy’s has been creating magical window displays since the mid-1870s. The tradition reached Thomasville around 1960, when Belk began decorating its windows for Christmas. The store changed its scenes from one year to the next, purchasing new characters and rotating them in and out. Folks came from miles around to see the elves, as well as Thomasville’s other festive attractions. “This is a small town, but we celebrated Christmas in a huge way,” Barnes says. “We had one of the biggest Christmas parades in the state, we had these window displays, and Santa Claus was upstairs at Belk, so people would come at night to see the elves and then go up and talk to Santa.”

“This is a small town, but we celebrated Christmas in a huge way.”

Larry Darr, who worked for Belk in the ’70s, remembers how popular the displays were because he was often called upon in the morning to wipe away the fingerprints from the previous night’s visitors. “There were actually fingerprints and noseprints,” Darr says. “And there were two rows of prints — a row down low, where the children were looking through the window, and a row up higher, where their parents were looking.”

Eventually, though, the mechanical characters began falling into disrepair, and Belk finally discontinued the displays in the mid-1980s, when the corporate office began sending its own representatives to decorate the windows. The figures went into storage until 1995, when the store closed and the Christmas displays were sold at auction. Former Thomasville mayor Hubert Leonard couldn’t stand to see the beloved characters tossed aside, so he bought a dozen of them and stored them in his attic — which, in hindsight, was probably not the best place for their fragile clockwork. Leonard eventually donated the collection to the Beautification Committee, which did its best to showcase them in different buildings downtown. But nothing could bring back their former luster, and soon enough, the elves and other figures found themselves out of sight — but not, at least for Barnes, out of mind. 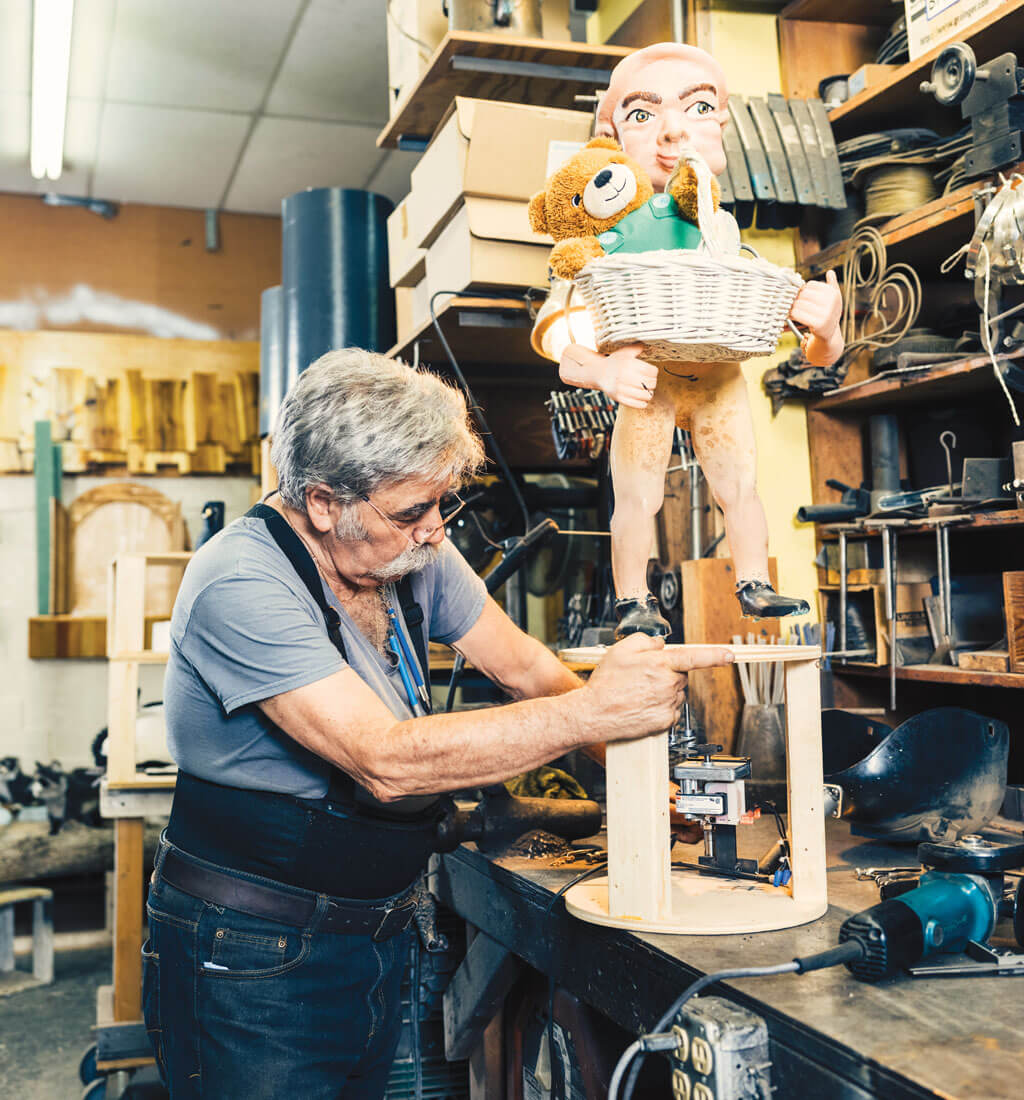 In his warehouse in Brooklyn, Nasti tinkers with one of Thomasville’s new elves. The Thomasville Beautification Committee raised $50,000 for Nasti to restore six elves and six other Christmas characters, and to create three new window scenes and 20 new characters. photograph by Chris Sorensen

Learning the truth about the elves was heartbreaking, but Barnes’s optimism returned when she discovered “the Geppetto of Brooklyn.” With the unanimous approval of the board, she sent photographs of the elves and a letter to the toymaker. Five days later, her phone rang. It was Lou Nasti himself, offering to pay a house call to Thomasville’s elves.

In the world of Christmas displays — more specifically, displays with mechanized characters who sing and dance and build wooden toys and paint baby dolls — Nasti is the reigning king. For 50 years, the Brooklyn native has been using mechanical and electrical animation to bring all sorts of whimsical characters to life: Santas. Elves. Teddy bears. Snowmen. Carolers. Nutcrackers. Gingerbread men. Reindeer. Toy soldiers. With a thick, walrus-like mustache, wire-framed spectacles, and a kindly face, Nasti even looks the part of Pinocchio’s toymaker. “I make people happy,” he says. “People are stuffy and starchy these days, and I make them happy.”

“Back in those days, if you had a doll in the window that could turn its head, people were amazed.”

Nasti began building robots and other mechanical creatures when he was just a teenager, once making the front page of The New York Times for a robot he built named Mr. Obos. Before long, he was helping create Christmas window displays for New York department stores, including Santaland at Macy’s. In 1969, he opened his own company, Mechanical Displays, Inc., and began building his own designs. “Back in those days, if you had a doll in the window that could turn its head, people were amazed,” Nasti recalls. “Now, we have synchronized figures that talk and sing and dance. We’ve come a long way.”

Nasti works out of a 15,000-square-foot warehouse in Brooklyn, next to a body shop. It’s nothing to look at from the outside, but inside is an enchanting world of his own making. In April, he flew down to Thomasville for a firsthand look at the elves, to see if he could fix them. Barnes was thrilled to meet him and inspired by his artistry. “He’ll tell you he’s never worked a day in his life,” Barnes says, “because he loves what he does so much.” 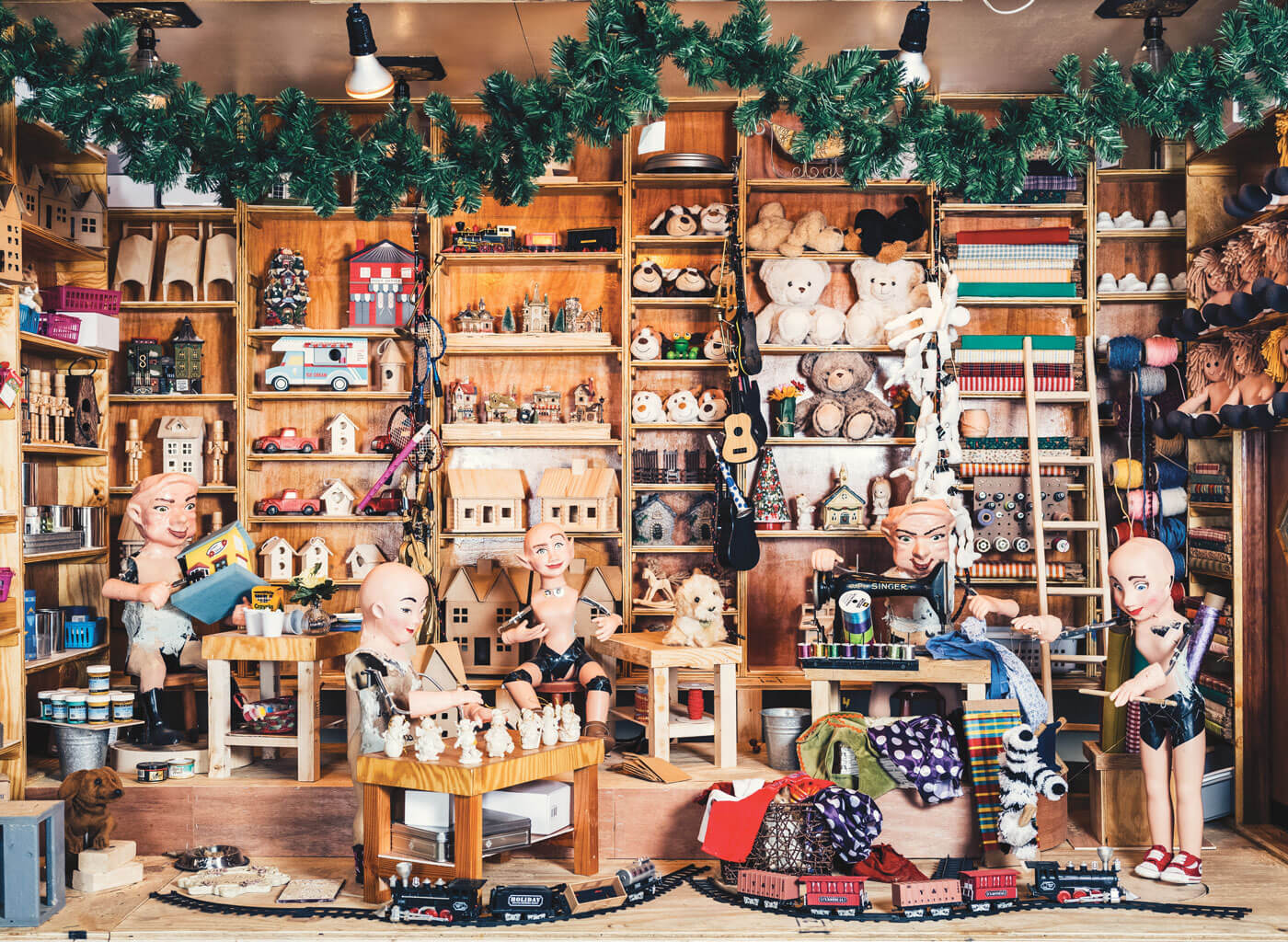 When these elves are dressed and ready for visitors, this scene will be unveiled in the second window at the Thomasville Emporium. photograph by Chris Sorensen

With Barnes and other committee members gathered around, he examined the dusty, lifeless creations with deep interest. Then he stopped and pointed to two of the elves. “Those two are mine,” he said, leaning in for a closer look. “I don’t ever build a mechanical with the motor inside because they’re too hard to maintain. My motors are always beneath the characters, just like these two.” He nodded at Barnes. “They’re definitely mine.”

Reunited with his old work, Nasti took to the project with gusto. He admits that he got a little carried away: Over a period of about six months, the toymaker and his team created 20 new characters to join the six original elves and six other figures that he restored. Each piece traveled through the various departments — casting, molding, animation, costuming, scenery — until they were ready for shipping. “It’s completely built and put together here in my shop,” Nasti says. “I have a ‘think chair’ where I sit and just stare at the scene, and, eventually, I’ll see what it needs — what prop I need, or how I want to dress this elf. Then I draw it and we make it.” Every day for weeks, he’ll keep coming back with new drawings. “They say I’m never really finished till the truck pulls up,” he says with a chuckle.

When the truck reached Thomasville in September, Barnes — who had only seen photos of the toymaker’s work in progress — was stunned. “The craftsmanship, the work — it’s like nothing I’ve ever seen,” she says.

In November, Nasti returned to Thomasville to install his creations in three large windows on the old Belk property, which today is occupied by the Thomasville Emporium. The experience he created is a fitting coda to the elves’ story: On the outside of the building, a small chalet houses an animated, talking and singing Pinocchio — voiced by Nasti — who greets visitors with an introduction to the display and a welcome to Thomasville.

The three windows tell the story of Santa and his elves preparing for Christmas. In the first window, on East Main Street, elves work feverishly to finish making their toys — drilling, hammering, sawing, and sanding. Around the corner, on the Commerce Street side of the building, the second window features elves putting the finishing touches on the toys. A little farther down, the third window shows the North Pole’s packing and shipping department, where a working conveyor belt readies the toys for Christmas Eve. Barnes marvels, “I’ve never seen anything like it, and I don’t think anyone else in North Carolina has, either.”

The project cost the Beautification Committee $50,000, but that was paid through grants and donations solicited by the committee. Many of the donations came from former Thomasville residents who still remember fondly the old Belk windows. Every step of the way, Barnes says, things somehow fell into place. “It was sheer happenstance finding Lou Nasti. I didn’t think we’d find anybody who could do what he’s done,” she says. “Really, it’s a Christmas miracle.”