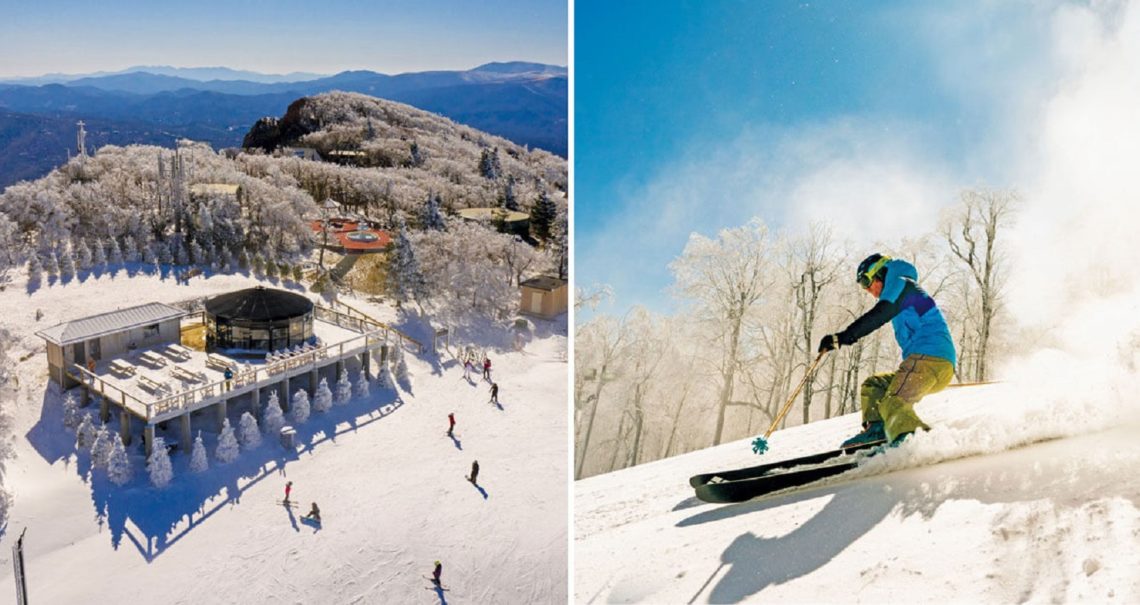 Winter begins with a hint of woodsmoke in the air. The afternoons darken. Nights lengthen.

In the High Country, winter is long, and it can be hard. But in the town of Beech Mountain, snow softens things. It reflects the limited light with brilliance. Here, where snow has been sighted every month of the year except August, flakes come in all forms. There’s the powder that squeaks under boot soles, the blizzards that deliver drifts for snowman-making, the dustings that resemble confectioners’ sugar. There are windblown snows that gather in mounds, and wet ones that crunch underfoot. There are hundreds of ways that snow touches the High Country, and Beech Mountain has more than its share of all of them. Even when it’s sunny in Boone or nearby Banner Elk, the peak of Beech Mountain seems to collect low-hanging snow before it’s had a chance to fall, with up to 135 inches in a single season. For snow lovers — and for summer lovers who are willing to give the colder season a fair shake — it’s a place to seek out winter adventures, time and again.

In 2015, Beech Mountain Resort upgraded its snow-tubing area to a full-on snow tube park to accommodate people who prefer to zip down the mountain on inner tubes, guided by chutes up to 700 feet long. At the bottom of the mountain, they can jump on a conveyor belt-style escalator, generally known as “the magic carpet ride,” and do it all over again. Resort administrator Leighann Cogdill has hosted relatives and friends on the mountain who’ve chosen the snow tube park over skiing or snowboarding. Some of her guests had bad knees; others were afraid of the chairlift’s heights. “Tubing doesn’t require new skills,” she says. “It’s a really mellow option.” For those who seek even lower-key experiences, the Town of Beech Mountain blows man-made snow on its municipal sled hill, right along Beech Mountain Parkway, to ensure that, regardless of what’s in the forecast, the littlest visitors can sled when temperatures drop. 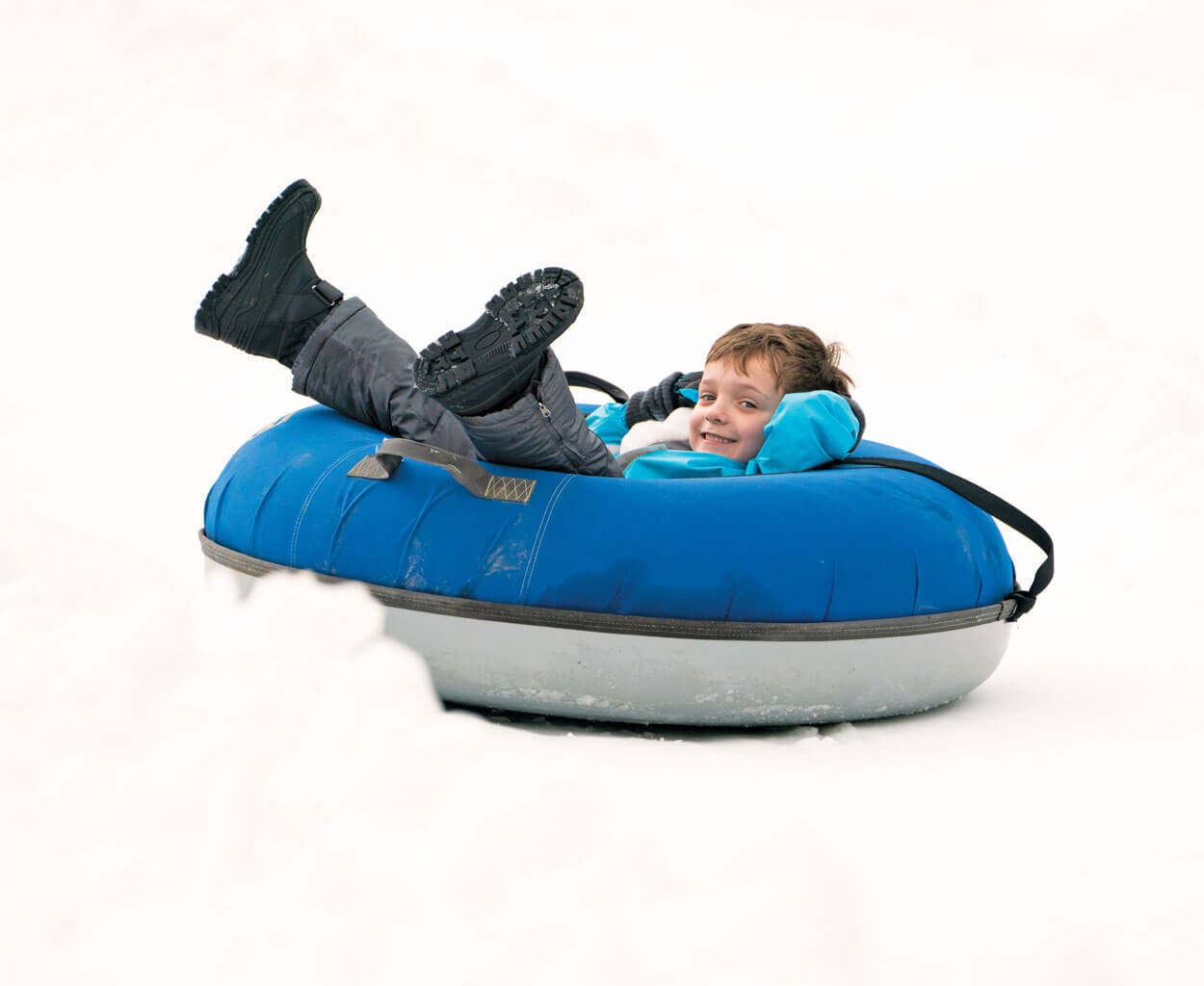 If you prefer relaxing when you’re sliding down a mountain — or if your little feet just aren’t yet ready for skis — make like Reves Camp, 6, and do a little tubing. photograph by Derek Diluzio

Talk About the Weather

Every morning at 7:30 a.m., Fred Pfohl — or one of the shopkeepers he employs at Fred’s General Mercantile — checks the weather via gauges, one of which is on the roof of the building, at an altitude of more than 5,000 feet. The store is one of a few official National Weather Service reporting stations in the area. No matter what the gauges say, Fred’s prides itself on never closing for a snow day. Need firewood for your rental’s fireplace? Fred’s has it. Considering a move from skiing to snowboarding? You can talk to attendants about rental gear. Wondering what weather conditions are like for hitting the slopes? You could check your phone — or you could chat about the weather directly with Fred, who has been reporting it for more than 30 years. Decades ago, he recorded his observations in a book. Then, the National Weather Service started calling for daily updates. Now, he sends his on-the-ground observations via computer. “You can get weather reports for Beech Mountain on the Internet these days,” Fred says. “But it all starts here.” 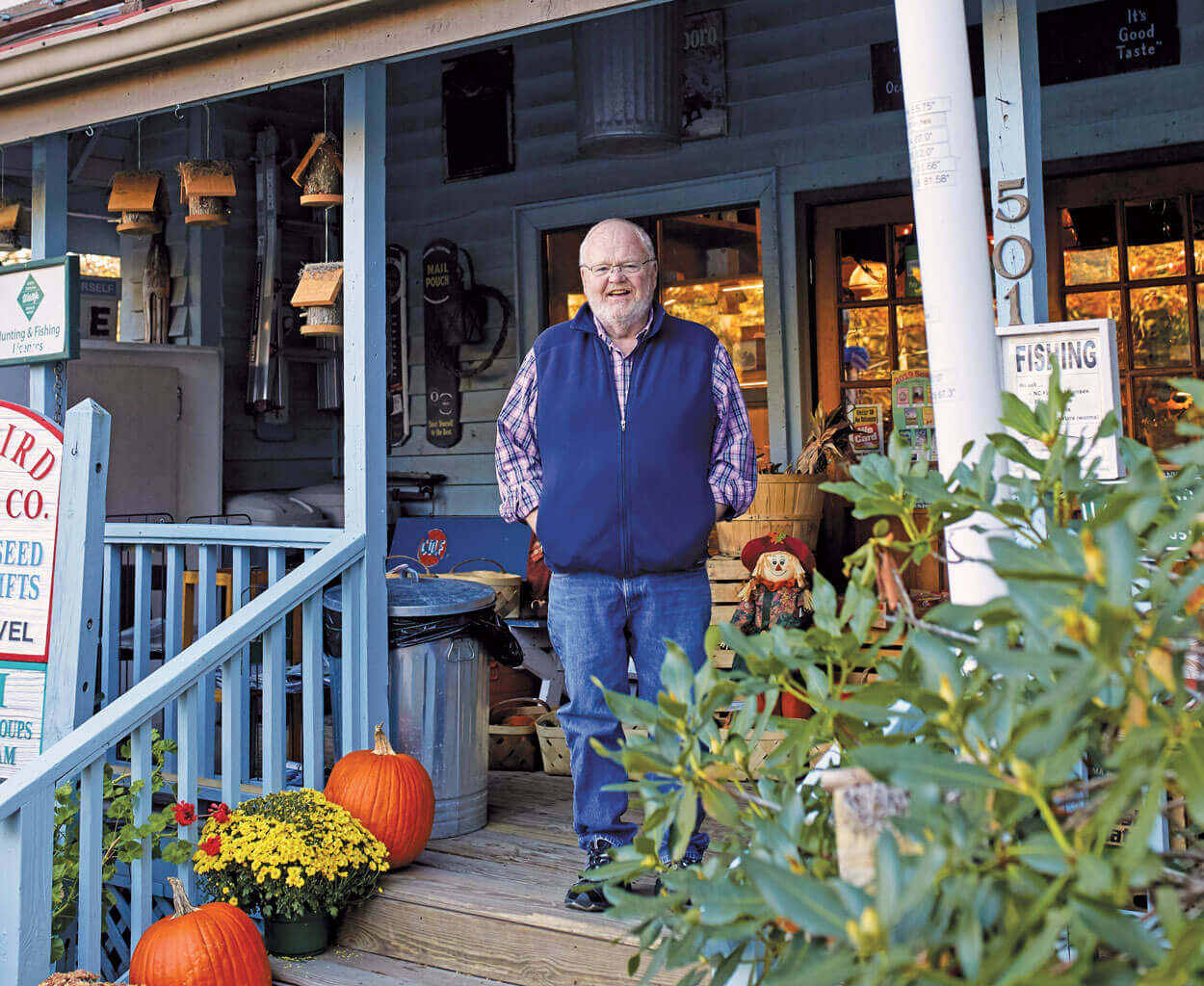 At the top of Beech Mountain Resort is a joint known as the 5506′ Skybar. It was named for its elevation, which easily makes it one of the highest — if not the highest — bars east of the Rockies. But it’s just as notable for its unique design: A glass, yurt-style roundhouse with a retractable roof, the Skybar offers drinks and snacks, heated restrooms, and a 2,800-square-foot deck. From up here, patrons enjoy views of the mountains beyond as they sip beer made in the resort’s brewery. The fact that winter visitors must be wearing ski or snowboarding boots to visit the Skybar — since it’s only accessible via chairlift — ensures an atmosphere of outdoor-sports camaraderie. 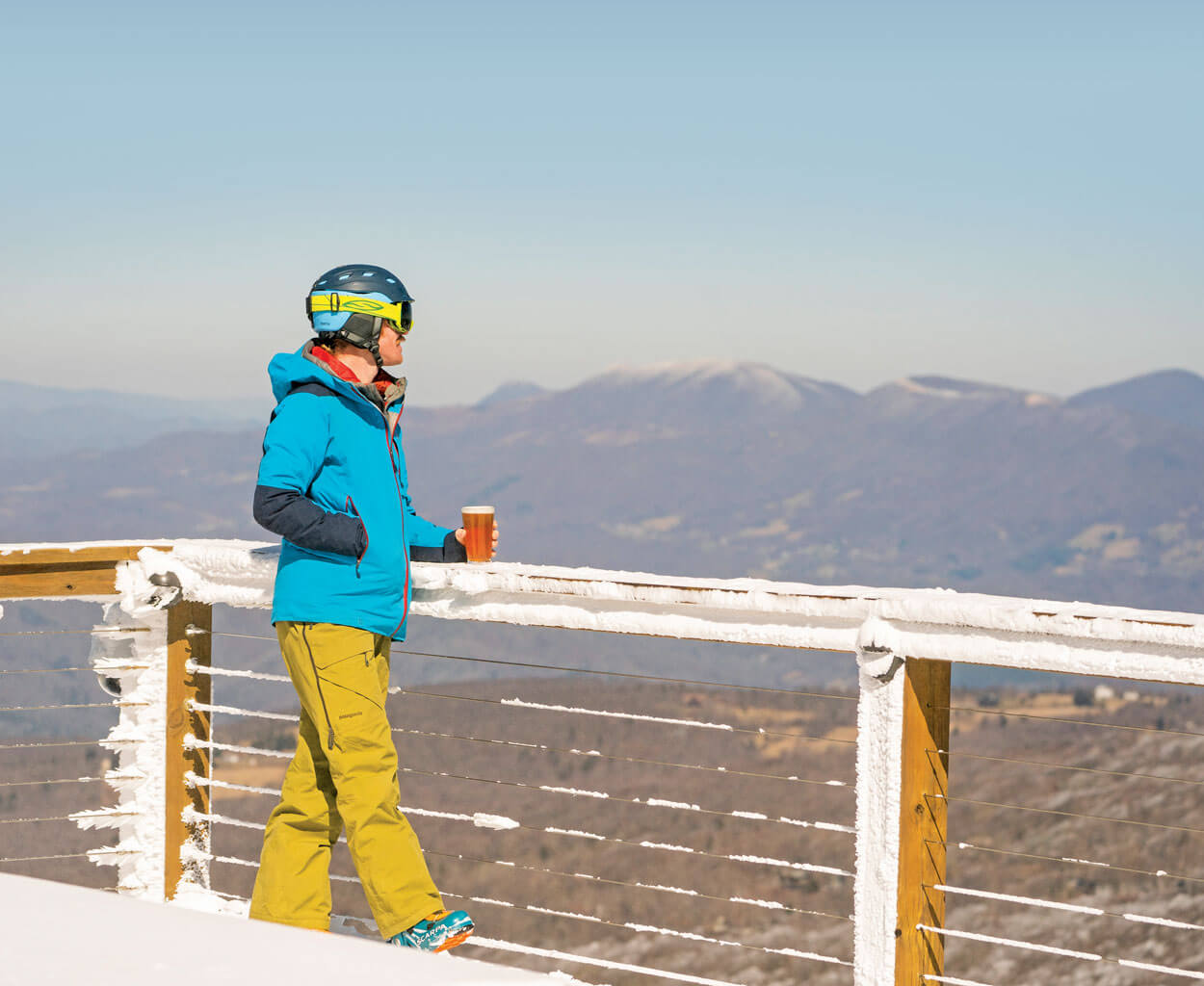 You can enjoy a Beech Mountain-made brew, like Mountain Town Amber, on the 5506′ deck. photograph by Derek Diluzio

Beech Mountain’s Parks and Recreation director, Sean Royall, knows that the marquee activities in his hometown are skiing and snowboarding. But visitors are often curious about other ways to enjoy the outdoors — and it’s Royall’s job to ensure that the town is there for them. Kids like to sled. And some grown-ups like to hike. Year-round, Royall and his staff maintain nearly 25 miles of hiking trails that, in winter, become prime paths for snowshoeing. When there’s enough snow on the ground to support the use of equipment, people can check out snowshoes at the Buckeye Recreation Center for free, like library books. “We’re not like a lot of parks and recreation departments,” Royall says. “We don’t have community sports. We don’t have a pool. Instead, we focus on getting people into nature. And during winter, that means we’re helping people make memories out in the snow.” 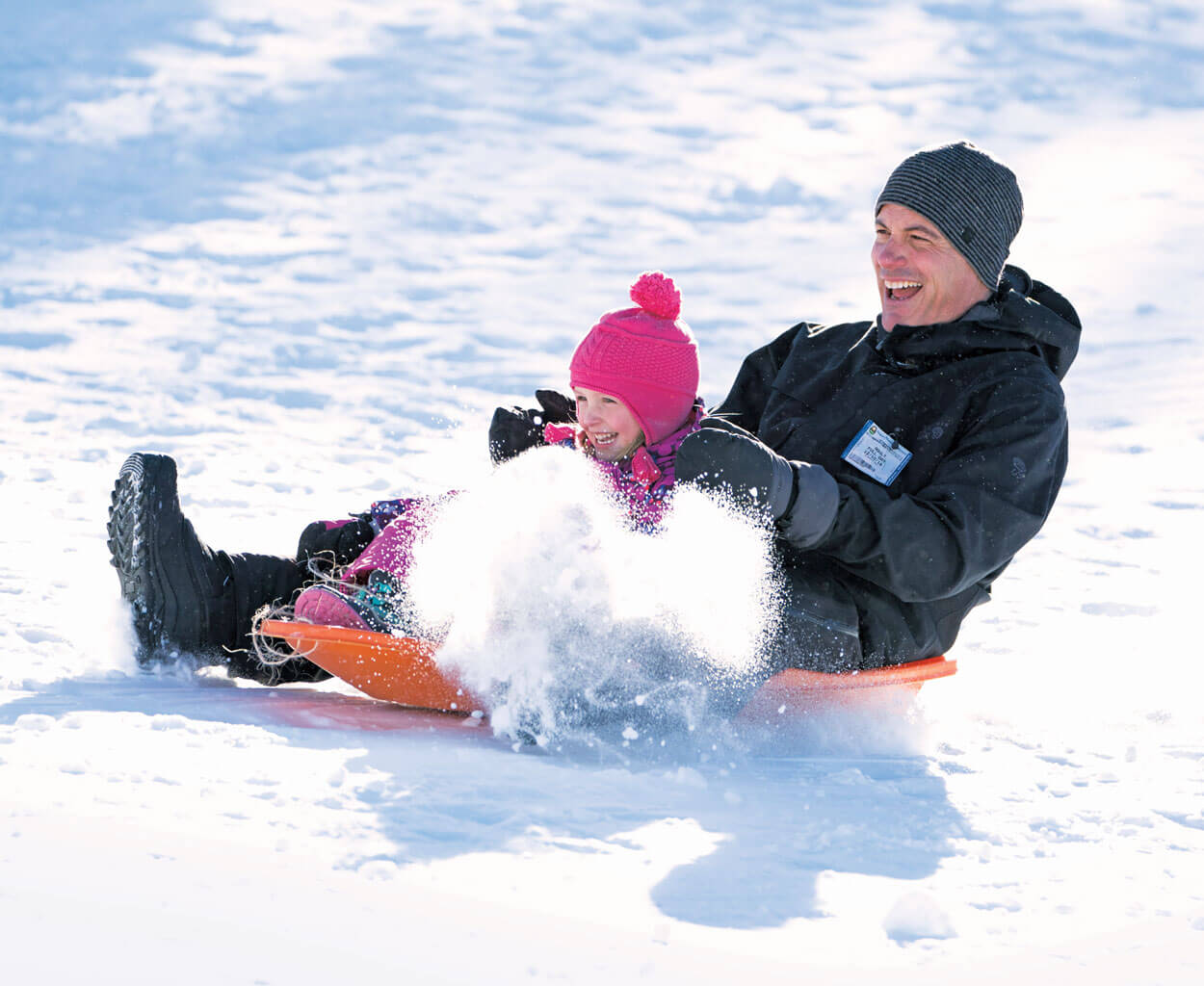 Matt Davidson and his daughter Ella Kate kick up a plume of powdery snow. photograph by Derek Diluzio

For more information on the activities at Beech Mountain Resort, call (800) 438-2093 or visit beechmountainresort.com.

For general information on things to do in the Beech Mountain area, call the Parks and Recreation Department at (828) 387-3003 or visit townofbeechmountain.com.