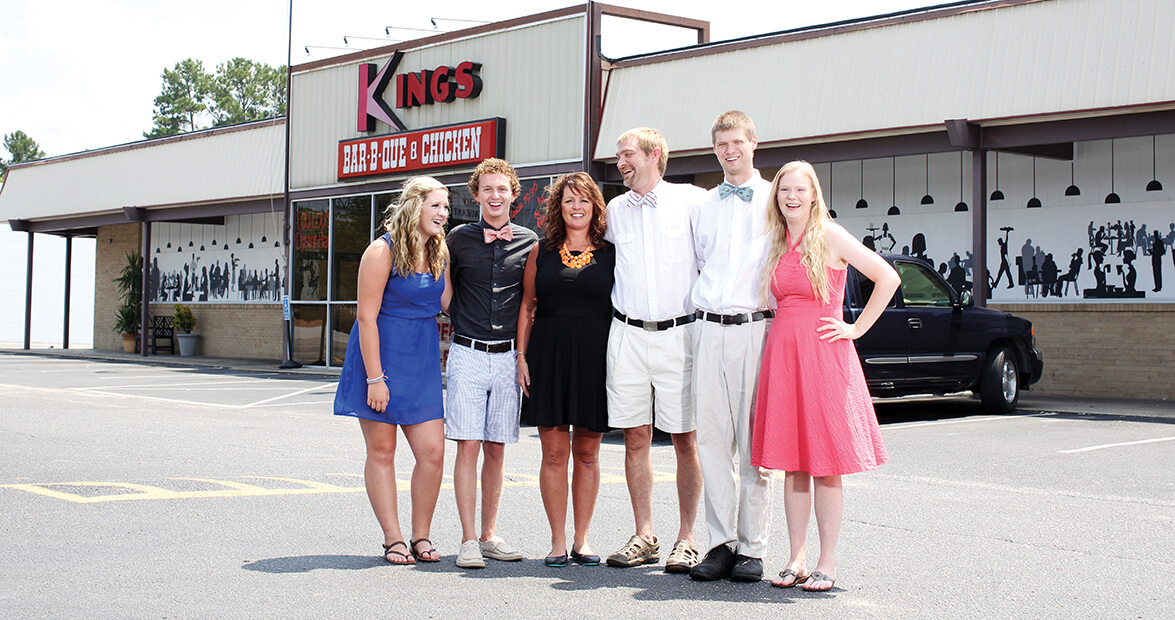 Hungrily have I crossed the Coastal Plain, braving the fraught congestion of U.S. Highway 70, to behold a legend. Well, actually, to eat the legend, which should be referred to in hushed tones as The Sandwich, unique in the world of barbecue-dom, invented and perfected by Kings Restaurant of Kinston: the Pig in a Puppy.

You like eastern-style, whole-hog, vinegar-sauced barbecue? You like hush puppies? No, not the soggy, pseudo-pound cake pellets that pass as hush puppies in some places, but the crunchy, savory corn bread fingers eaten in paradise?

Kings’ Pig in a Puppy is all the cholesterol-filled deliciousness you could ever crave, in one handy sandwich. Now, let me warn you: Accounting for the juicy barbecue, the oil from the hush puppy, and the creamy coleslaw, you might want to wear a bib before biting in. But, oh, for those who like their barbecue, and for those who like the accompanying hush puppies, here is the time-saving union of the two, both at once, the hush puppy shell fried to a crispy brown (which is the best part of the hush puppy anyway) and the smoky, succulent, cooked-for-12-hours, eastern-style pork safe inside.

Who, I wonder, was the genius who thought of using a giant hush puppy as the bun for a barbecue sandwich?

“Faye Lewis thought up the Pig in a Puppy,” says Joe Hargitt, the restaurant’s owner and general manager, who’s worked at Kings since high school. “I saw it for myself.”

Kinston used to be Kingston at its founding in 1762, and was named for King George III. It became “Kinston” through the years because it’s too hot down here to pronounce that G. I figured Kings Restaurant harkened back to the colonial past and His Majesty, but nope. It was the brainchild of Wilbur King Sr., the son of Frank King, who opened a country store and filling station in front of his Kinston farm in 1936. Wilbur took over the business two years later, adding a poolroom and potbellied stove in the back, where he produced small, hot meals. In 1947, he banded with his brothers Lawrence and Victor to launch King Brothers Barbecue. The country store transformed into a café, the poolroom into a grill (I’m quoting the menu, here: “The back parking lot once enjoyed a reputation as the most famous ‘Lovers’ Lane’ in Eastern North Carolina!”). In time, word spread about Wilbur’s side offering of barbecue, cooked a half-pig at a time. 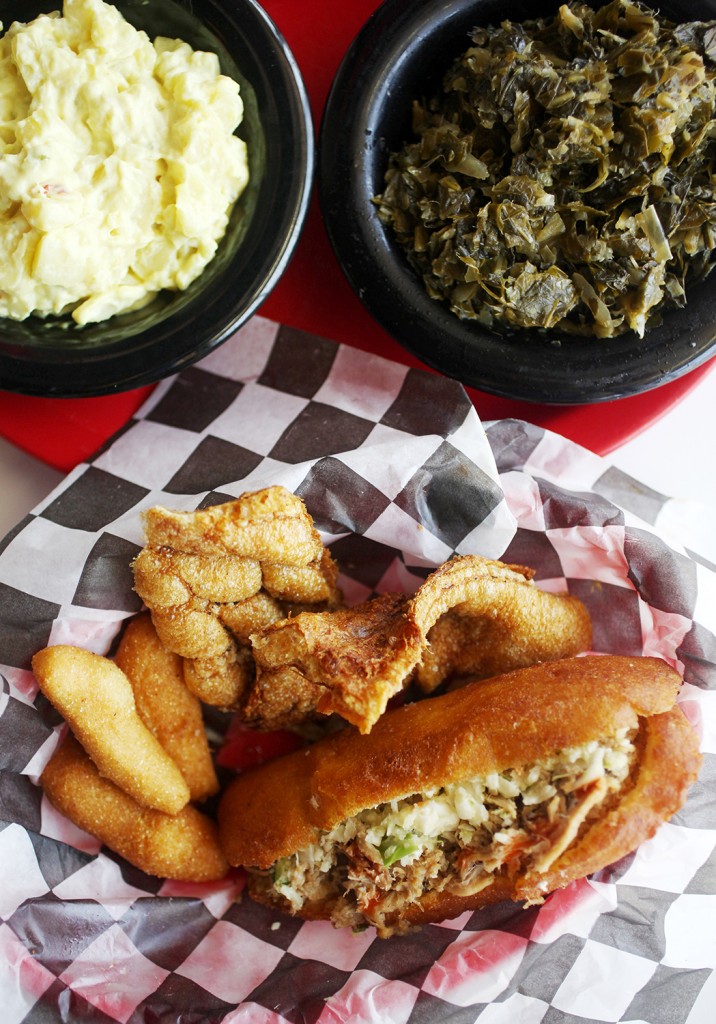 Customers return time and again for the Pig in a Puppy sandwich, as well as the restaurant’s collard greens, a side dish so delicious that King’s cooks greens in bulk to distribute to other restaurants. photograph by Travis Dove

Kings took on its present form — two vast dining rooms that can serve 268, with banqueting facilities for 400 — in 1971.

By the 1980s, Kings also had a small lunch counter at a nearby Piggly Wiggly supermarket, where Faye Lewis was in charge. The restaurant became famous for its flat, frying-pan corn bread, upon which they’d heap a pile of barbecue. Customers at the Pig would request it, but Kings didn’t have an oven. They did have a deep fryer, though.

“Faye took the cornmeal and balled it up to make a bun, deep fried the whole thing just right, cut it in half, and put the barbecue and slaw inside it,” Hargitt says. “I went back and told Mr. Wilbur, ‘Man, you gotta see this thing. It’s become the hottest thing on the menu.’ ”

The King brothers’ reputation quickly grew among beachgoers desperate for a barbecue fix before all that mandatory fried seafood to come. Today, Kings has three branches, including an outpost in Snow Hill.

Aside from the Pig in a Puppy, Kings’ other claim to fame is its collard greens. The restaurant has become like a Colombian cartel of collard greens, in fact. They supply to local restaurants and institutions that can’t cook them as well — supplying over a hundred cases of cooked greens a week.

I saw the greens room and lived to tell. A lovely young lady was cutting out the stems from a mountain of collards from the T.C. Smith farm in Seven Springs, plucked from the earth that morning. Speculating aloud about Hargitt and his role as the Godfather of Greens got me whisked away from that operation to the cooking room.

Electric cookers for the whole-hog pork. The sauce is vinegar-based with spices and peppers and a little tomato paste, but it never knows the taint of ketchup. Hold it up to the light: transparent, golden, the elixir of Down East. And over there’s the smoker for the ribs and the brisket. Somewhere in Manhattan’s Lower East Side, a grandmother has got a hit out on Hargitt for the excellence of his brisket, which is smoked with waterlogged applewood. But I’ve seen too much, learned too many secrets, so it’s off to the shipping center where the Kings empire continues its march nationwide.

If the Pig in a Puppy is Kings’ greatest contribution to barbecue culture in North Carolina, the Carolina Oink Express is Kings’ greatest contribution to ’cue culture in the country. You see, King’s has a mail-order service that will get you your chopped pork, hush puppies (pre-fried and frozen), black-eyed peas, Brunswick stew, collard greens, coleslaw, and pork ribs delivered to you within 48 hours, anywhere in the U.S. of A. North Carolina-born servicemen and women (as well as people out of the service whom we’ve enlightened) have the Oink Express sending 50 to 60 care packages a week to the deserts and metropolitan areas of our great nation. Kings is on the Army and Air Force Exchange, so you can get your barbecue on base, too.

Even the Our State Store catalog in this issue you’re holding will let you order Oink Express barbecue. And the gourmet food website Goldbely.com includes Kings in its “Legends of BBQ Road Trip” sampler — beef ribs from Salt Lick, Texas; Corky’s baby back ribs from Memphis; the “Burnt Ends” hash of meats from Fiorella’s Jack Stack of Kansas City; and chopped pork barbecue from Kings in Kinston. Now, that combo would be a great Father’s Day or birthday or Christmas gift, and if you haven’t gotten such a shipment from your kids, well, they must not love you.

But be warned: You can’t get a Pig in a Puppy by mail. You’ll have to drive to Kinston like I did to savor it, and wonder, a few bites in, Why didn’t someone think of this sooner?