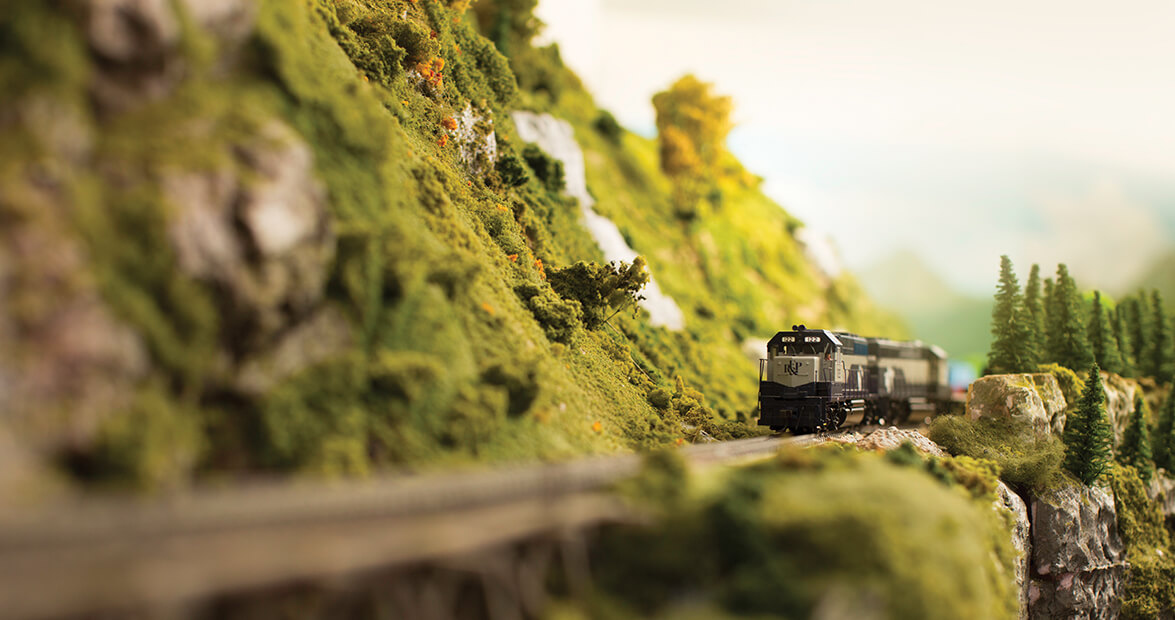 Down in the basement of the Kinston Arts Center, devotees in engineer hats have spent the past 15 years constructing a model train display that fills two rooms big enough for a decent game of basketball.

After they filled the first room with a granite peak that nearly scrapes the 8-foot ceiling, they cut a hole in the wall and ran a line of tracks into the space next door, quickly packing it full of tiny figures who tote toothpick-size logs and unload tiny boxcars of Candee-brand tomatoes.

A miniature railroad is intricate by definition. But Kinston’s is detailed enough to include a funeral scene. Engines chug past a blond-haired mourner clad in black, her head tossed back in grief, and a pastor waving a Bible in the air.

With this train, you don’t just get storefronts with names like Becky’s Florist Shop and Bluefin Seafood painted over the door. You get the ant-like people patronizing these matchbox businesses, munching fish sandwiches and arranging bouquets.

There’s a circus on its way into town. Not just elephants, but camels, too. A long line of them march down Main Street, led by a grand marshal in a plumed hat. Meanwhile, The Great Train Robbery is showing at the downtown Palace Theater, which lights up.

The architects behind this showpiece volunteer for the Kinston Area Railroad Modelers Association, known as KARMA.

They haven’t just strung together 500-odd feet of track as a playground for 250 train cars. They’ve built a little North Carolina, craggy peaks at one end, seaport at the other. It’s not painting or sculpture. But for Sandy Landis, the Kinston center’s director, it counts as art.

“I guess it’s not art in the traditional sense,” she says. “But it’s emblematic of who we are as people. That’s what art is.”

Kinston, population 21,000, houses one of the state’s largest model train displays, covering 800 square feet of floor space. Small but strewn with curiosities, the town already owns such distinctions as Mother Earth Brewing and the once-sunken ironclad CSS Neuse. So it’s fitting that the train display occupies the basement of the downtown Arts Center, a century-old building where the members of KARMA share space with the Neuse Quilters, the Down East Woodturners, and a middle school jazz band. “We do a lot with a little here,” Landis says.

The idea of making miniature versions of locomotives is almost as old as locomotives themselves. It’s a notion that started in Germany in roughly the 1830s, but those early models featured no moving parts and cost more than the typical family could afford.

By the 20th century, in America, the hobby had developed to the point where entire trains were made and sold along with the stations and sections of track, growing more realistic and labyrinthine.

As a modelist, you’re never really finished building. After 15 years, Berry still describes the project by saying, “So much to do.” Once a week, Landis comes down to the basement and can’t recognize what she saw the week before.

KARMA’s work is different from building a battleship with glue or mounting a deer’s head. Trains are all about going places. You hear the whistles at night and wonder where they’re headed, and maybe wish you were going, too. You’ve got to fidget with a project like that. Change its direction.

The re-created landscape matches the state’s layout, from the caves and the grazing deer in the ceiling-high mountains to the farmer working a tractor along the tracks.

But the trains themselves aren’t always the same kind of engines that pass on the tracks outside the Art Center’s front door. The nine members of KARMA supply their own, bringing them from their homes in Kinston, Rocky Mount, Newport, and Goldsboro.

The beauty of a train model relies on perfect re-creation, down to the pilots and hood panels. But if you’re laying your track using North Carolina as a palette, your attention can wander.

You can work in the laundry flapping on a clothesline and the fire escape running down the redbrick hotel. You can fashion a man sitting on a park bench, bottle in his hand.

That’s all KARMA has done in this Kinston basement on Queen Street: gathered up pieces of scenery, given them paint, and fit them into place for a passerby to enjoy.