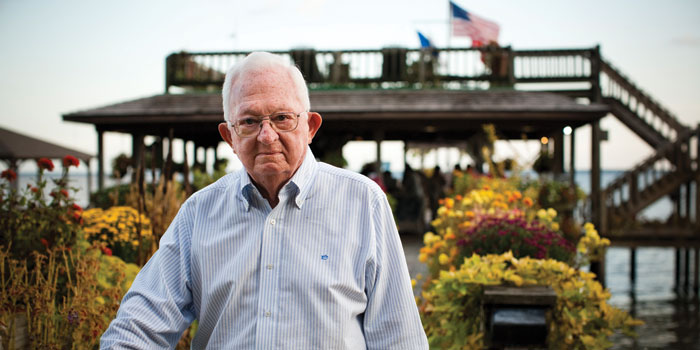 Nothing about Lake Waccamaw should be the way it is. It’s a vast, oval lake, so shallow you can almost wade across it — exactly where no lake should be, in flat, coastal North Carolina. Surrounded by lakes so acidic they support only a few of the most common fish and mussels, Waccamaw teems with life, including several endemics — species that live nowhere but Waccamaw. And the community of Lake Waccamaw, in economically troubled Columbus County, all but actively discourages tourist development. It’s strange. There must, an outsider might say, be something in the water.

Well, that’s the obvious place to start. For one thing, Waccamaw is a real lake. Not a reservoir — a naturally occurring body of water — and a big one. About 9,000 acres, surrounded by 14 miles of shoreline, Waccamaw is the third-largest natural lake in the state. But lakes tend to be in large valleys — think mountain lakes — or at least in depressions scoured by glaciers, like the Great Lakes. (Story continues below video.)

A few minutes in a canoe on Lake Waccamaw, North Carolina’s eerily beautiful nine-thousand-acre lake, down east near the SC border and the ocean. Video by Scott Huler.

Not Waccamaw, down in the swampy Coastal Plain. Waccamaw turns out to be among the biggest of the Carolina Bays, a series of half a million lakes and wetlands sprinkled from Delaware to Georgia. They’re called bays not because they open onto the ocean, but because of the sweet, loblolly, and red bay trees that fill them. They have an oval shape, oriented from northwest to southeast. Most are wetlands; some are even dry, but larger ones — like Waccamaw — stay filled. They have unique ecosystems, and people love to theorize about their origins and worry about their futures.

Lake Waccamaw State Park Ranger Chris Helms clears up some things. First, the bays are not sinkholes, and they were not caused by the swimming action of fish. (No kidding — this is one of three theories park displays debunk.) Everybody’s favorite theory is that meteorites caused the bays. Even the local Waccamaw Siouan tribe calls itself the People of the Falling Star — dugout canoes hundreds of years old have been found buried in the lake. But meteorites leave behind deep, round holes, not shallow, oval ones. (Waccamaw goes down only 11 feet at its deepest point.) What’s more, Helms says, “We’ve never found any meteorite pieces or particles.”

No, scientists say the bays were caused by slight natural depressions in the land when the sea receded thousands of years ago. Some dried up completely, but most became swamps. Most are surrounded by a rim of sand, probably caused by moving ice back in the days when the ponds froze. Gnarled turkey oaks and majestic longleaf pines grow there.

And there really is something in the water. The few nearby bays that still contain open water, fed almost entirely by runoff and groundwater seeps, are much smaller than Waccamaw (in the hundreds, not thousands of acres). Their water stained by tannins released by decaying peat, the bays become powerfully acidic, unfriendly to most life. Waccamaw avoids that fate for two main reasons. For one, limestone bluffs on its north shore act as a kind of natural antacid, a Bromo-Seltzer relieving the dyspepsia of an entire ecosystem. More important, Waccamaw is fed not just by runoff, but also by the black waters of Big Creek, itself charged by several swamps. The lake then drains into the Waccamaw River, which continues its lazy way to the sea. So Waccamaw’s moving water, softened by that limestone, becomes less than one-hundredth as acidic as its neighbors. The sweet water is home to dozens of fish and mollusk species, several of those endemics: The Waccamaw silverside, for example, looks like a minnow, and locals call it skipjack because it skips along the surface when chased. Or the Waccamaw fatmucket mussel, one of the 25 billion or so mollusks any wader in the lake’s vast, sandy shallows is likely to encounter underfoot.

The place to begin investigating Waccamaw by paddle is the Columbus County boat ramp, right where Big Creek enters the lake. Dyed by those tannins, Big Creek is black as yesterday’s coffee, the slow-flowing water perfectly still, water lilies and their spiky, white flowers the only break in the mirror of the surface. Cicadas chirp. Crows occasionally caw. The sound of church bells wafts upriver from the town of Lake Waccamaw all the way across the lake. Cypress knees poke up. Swaying Spanish moss hangs down all the way to the surface. If you look hard, you can see gators.

But the highlight of the paddle comes when you slide out of the creek into the lake itself, which opens wide like a pair of arms in a breathtaking, sudden expanse. One moment you’re in a green tunnel on black water — and then you’re in the middle of a vast, oval bowl. Helms says that after rain, the water from the creek looks “like someone had taken gigantic tea bags and set ’em loose — we see that stained water spreading through.” Even on a dry day, the color of the water beneath the canoe changes: from coffee to stout, to tea, to watery tea as you get farther from the creek. You can see the sandy bottom, never deeper than the paddle; schools of little fish dart this way and that.

The trees ringing the lake somehow just look right. They are pond pines and cypress — trees that like to get their feet wet. Trees that belong around a lake. Everywhere on the rim of the lake piers stick out. The state owns the lake, but with the exception of the state park, individual people own the shores.

Like the origin of those endemic species, this is kind of a long story, but the outcome is the same. The people who choose to live on the shores of this unusual lake have, over time, become an ecosystem of their own.

American Indians lived around the lake for hundreds of years before European settlers arrived in 1745. A burgeoning turpentine industry picked up in the mid-1800s, joined by logging and shingles industries late in the century. Barges carried shingles from the south shore to the north shore of the lake, where mule carts pulled them to the train depot, where the Atlantic Coast Line carried them all over the country. After an early 20th-century renovation, for example, Waccamaw shingles cover the roof at Mount Vernon.

Lumber companies still work Columbus County, but most of the turpentine, tobacco, and textile companies that used to drive the county are long gone. Freight trains still serve Whiteville, but the Waccamaw depot is now a museum. Tourist dollars seem an obvious replacement — but still, most of its houses owned by families with long histories in Whiteville or Hallsboro, Waccamaw prefers its own quiet company.

Canoe rental at Lake Waccamaw? Good luck; it’s strictly a bring-your-own proposition. And if you entertain the preposterous idea that Dale’s Seafood, with its inexpensive baskets of fried oysters and its pleasant porch overlooking the water, is not satisfactory for dinner, you better head to the highway: Dale’s is the single restaurant on the lake. And even Dale’s commodious pier has a sign announcing that you’re welcome to use it — if you’re a customer.

Which is the way Lake Waccamaw residents like it. Limited access may discourage tourists, but it creates a profoundly homey feel. Consider leading citizen Ginger Littrell, who runs the Lake Waccamaw Depot Museum that fills the relocated 1904 train station with tools and artifacts. She welcomes you into the museum — but admits that “we don’t want anyone to move here.” Then she’ll likely turn around and invite you to a weekly party, running from May to Halloween, every Friday evening, on the pier of Johnny McNeill, age 93.

You and everybody else are invited. Just bring a covered dish and a donation for the treasure box on the pier: “We go down there 6:30 or so, and we ring the bell at 7 o’clock,” says Frank Gault, the evening’s cosponsor. In the 15 or so years they’ve been holding the weekly parties, they’ve raised about $50,000, split between the Depot Museum and the town library.

You’ll have no trouble finding the place. Several neighbors’ yards have signs for parking, and if you’re walking, just follow the crowd onto a flower-covered dock with a two-story shade house on the end. The gathering started as a fish fry but turned to a potluck when Gault aged out of frying catfish every weekend. The crowd gathers early, Gault says. Then they ring a bell and have announcements and a brief prayer at 7 on the dot, and then it’s eating and telling lies until about 9, when people head home.

McNeill, who for most of his life ran a pharmacy in nearby Whiteville, grew up on the lake. “The lake was just a great place to go,” he says, in between guests paying court to him on the pier. “We grew up loving water, loving boats — we made canoes, even made a schooner one time.” In the mid-1940s, a developer dredged a canal to drain the northwest shore of the lake to render it suitable for homes. McNeill bought what he considers the prime spot on the lake — although when his son, Ron McNeill, said it perfectly caught the afternoon breeze, Sarah Wyche chimed in, “We were always told the best breeze was at our house.” Her grandparents’ house, she means — built in 1909.

That’s how long the community stretches back at Lake Waccamaw — and what makes it special, Ron McNeill says with a laugh. “They say their 5 o’clock breeze is better; we say our 5 o’clock breeze is better. That’s classic, old-school North Carolina: multiple multigenerational families who argue about the same inane subject.” And they protect what they’ve got. Partygoers proudly explain that they prevented Lake Waccamaw from being developed into a vacation destination.

Ron McNeill laughs about the traditional Old South nature of the cheerful neighborhood one-upmanship, but he also identifies it as simply human. “You could translate that to Greece or Persia or China,” he says, “and it would be exactly the same.” They call it community, and a strong one welcomes guests — but values itself, and its resources, too. That’s Lake Waccamaw. The town community is exactly like the lake’s ecosystem: What makes Lake Waccamaw unique are its endemics, the species that thrive only here. It’s not that the Waccamaw silverside couldn’t have evolved anywhere else — it’s just that it didn’t evolve anywhere else. It evolved here. And sure, Waccamaw’s brand of community could be translated to Persia or China. But it’s not Persia or China. It’s Waccamaw.

There must be something in the water.