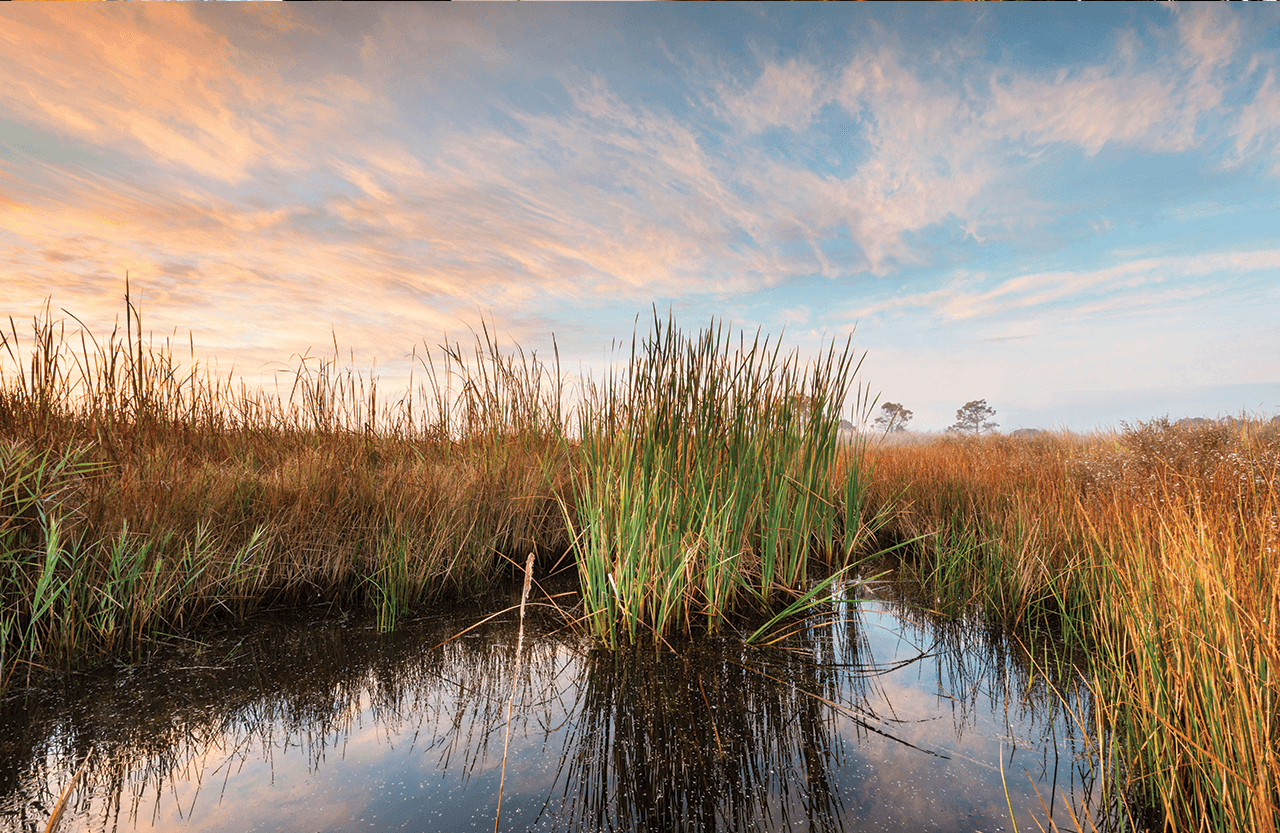 For a week, I see almost nothing but Spartina alterniflora.

Tall, green stalks stick several feet above the surface of the water. For hour upon hour, mile after mile, my canoe slides quietly along the edge of the saltwater marsh. And what grows in the marsh? Mainly one thing: Spartina alterniflora.

Marsh grass. Acres upon acres of marsh grass. If I stray a bit farther into the Intracoastal Waterway, I see it spread in waves of green shoot, brown husk, whispering with wind, rustling and swaying with waves. When I paddle closer, right along the edge of the marsh, I hear it hiss as my canoe rubs up against it. When, as I occasionally do, I paddle into a winding tidal creek, it all but closes above my head, and I look around and see nothing but marsh grass, blue sky, and high, white clouds. For all the difference I see in my environment from what explorer John Lawson would have seen, it could be 1700.

Which is exactly why I’m out here. What else I’m looking for will probably change as I continue along this path and figure it out, but to start with, the spartina works. I’m trying to be somewhere else, somewhere I’ve never been.

Lawson was doing something then that we all wish we could do now: He was lighting out for the undiscovered country, to see what he could see, to find out what was there. A full century before Lewis and Clark famously did the same thing somewhat to the north and west, Lawson set off from somewhere people had begun to call civilized and launched himself among the undiscovered and unmapped, among native peoples and native plants, to see what lived, grew, and wandered on the unexplored terrain.

It was that kind of time. In 1663, King Charles II issued the Carolina Charter and began assigning Carolina territory to English landholders — the famous eight Lords Proprietors. By 1670, Charles Town had been founded, and by 1680, it had moved to its current home. Back on the other side of the Atlantic, the world was waking up to the scientific revolution: Newton wrote his Philosophiæ Naturalis Principia Mathematica, on which the modern world is pretty much based, in 1687 — when John Lawson was about 13 years old. People could head across the Atlantic and feel fairly sure they’d reach the other side. The European powers were seizing and parceling out the continents of the New World. And John Lawson attended classes at Gresham College in London, where The Royal Society — the brand new society of Enlightenment scientific thinkers — met.

Perhaps enchanted by those scientists, Lawson found himself, in 1700, an educated man at a fidgety 26 years old, looking for something to do. Around the year 2000, we began calling young people in that situation “millennials.” Lawson’s situation was the same: The world and its technologies were changing rapidly; explosions of new information were overwhelming old ways of thinking about and doing things. And in such an environment, Lawson loitered in London in 1700, looking for something cool to do. With nothing else coming to mind, he planned to go to the Grand Jubilee in Rome, where the Pope threw a big party every 25 years for people to request pardons for their sins. (Think of a cross between the Olympics, the state fair, and a NASCAR race: Everybody got together and kind of did stuff.) But, as Lawson explains in A New Voyage to Carolina, the book he eventually wrote about his experiences in the New World, he “accidentally met with a Gentleman who had been Abroad” — Lawson doesn’t give the name. And that gentleman convinced Lawson that he was facing the wrong direction. “He assur’d me, that Carolina was the best Country I could go to; and, that there then lay a Ship in the Thames, in which I might have my Passage.”

I like to think of the unknown Gentleman saying, “Well, yeah, sure, you can go to the Jubilee. But don’t you think Rome is kind of, I don’t know, 17th century? The 18th century is west — over in Carolina.” Whatever his friend said, Lawson headed west instead of east. It may have been as simple as a free ride. Fortunes have been made and lost for less.

So Lawson headed to New York and then Charles Town. From there, he was commissioned by colonial authorities, and ended up, a few months later, making his long trek. He says he traveled a thousand miles total (though by our maps it looks a lot more like 550 or so), making a ragged “C” starting in Charles Town and looping up through what would become modern Charlotte, Hillsborough, and Little Washington. He left December 28, 1700, and two months later arrived at the narrow outlet where the Tar River pours into the Pamlico Sound. More than 300 years later, historians, scientists, archaeologists, and anthropologists still study A New Voyage to Carolina for Lawson’s observations of natural history, geography, ecology, and culture.

Lawson ended up living in North Carolina. He helped found Bath and New Bern; became the colony’s surveyor-general; published his book in 1709. And, sadly, when the Tuscarora War broke out in 1711, he was the first casualty, probably tortured to death near present-day Grifton, where they hold John Lawson Legacy Days every fall to commemorate his contributions.

On his trek, Lawson walked most of the way, but he spent his first week of travel in a canoe, slipping in and out of the tidal creeks along the South Carolina coast.

It’s easy to understand what Lawson was looking for. In a time when there were actual empty spaces on the map, Lawson went out to fill them up. What I’m looking for is less clear. In retracing his journey, I can’t hope for empty places — our maps are completely full, and we don’t have to go any further than our phones to get a look at them. In fact, I discovered Lawson because I went looking for information about my own yard in Raleigh. When I discovered that his was the oldest thorough description of our state, I wondered how close he had come to my house. (Within a few miles, it’s currently believed.) And I wondered how what we see now differs from what he saw then.

Yes, I know: We have no empty places left on the map. But that hardly means there’s nothing left to find, whether it’s an archaeological site, a strip mall where there used to be a Native American village — or a place where the spartina closes around you almost exactly as it would have 300 years ago.

In this world of instant connectivity and more information in a day than a person of Lawson’s era would have digested in a lifetime, there’s a lot to be said for heading out into the world, looking for — when no empty spaces remain on the maps — such empty spaces as we can find. With all this data available, we can forget that there’s a real, actual world out there, and that exploring it, opening our eyes to its surprises and gifts, is a worthy enterprise, regardless of what Google Maps has to say about it. Think about it: Growing up, you used to run around behind garages, through hedges, across vacant fields and lots. Those spaces might still exist, or they might now be strip malls, condominiums, interstates. Regardless — could some map, some photograph, bring to life what you found when you went out there? The acorns that tasted terrible, the lizards, the wounded birds, the neighbors’ laundry flapping on the line?

No. They’re what you found — when, at age 6, or 16, you went out yourself, looking for something new. If you weren’t out beyond the known world, you were beyond your known world, and that’s a place to start.

I started, like Lawson, in Charleston. I hope to end up, like Lawson, where the Tar enters the Pamlico. And I certainly hope not to, like Lawson, be tortured to death in the end. But once you leave home, you have to be willing to accept what you find.