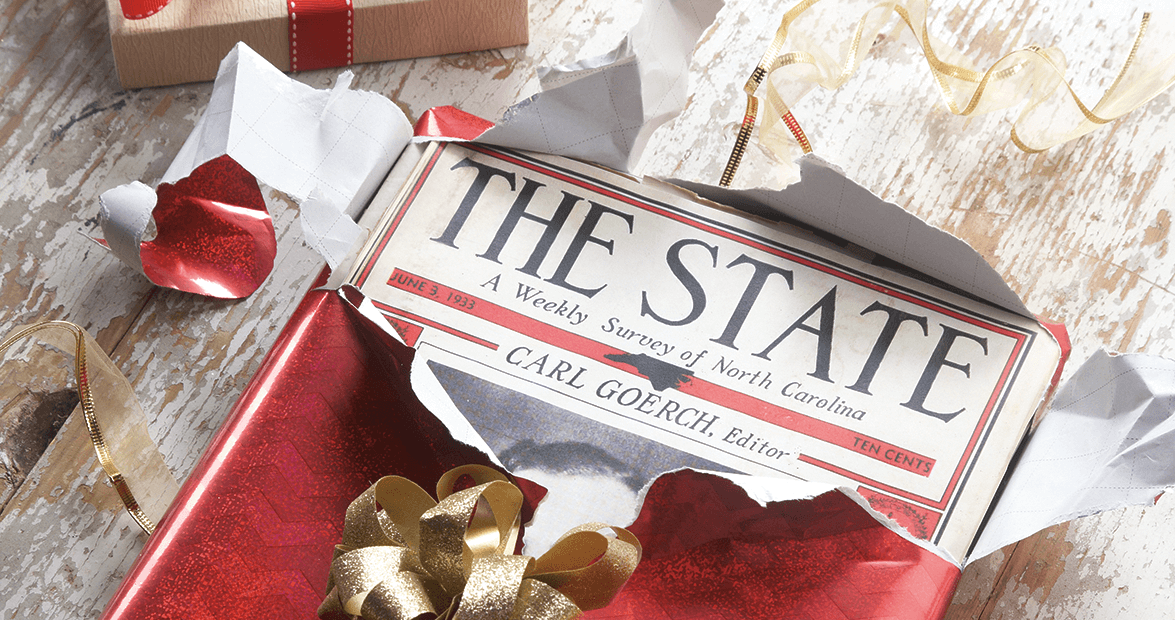 Since the dawn of the Internet, you’ve been able to read just about everything ever written from just about anywhere and anywhen. You can download e-books and e-texts, and stream terabytes of verbiage over whatever device you care to use. You get the text instantly, and you can read everybody from Aristotle to Joyce to Sam Ervin without leaving your armchair.

The problem is, if you just read the text, you never leave your armchair.

Let me explain. I’m talking about the difference between reading words and seeing those words on the pages from which they came. Reading just words — the distilled information from a story in a newspaper, magazine, journal, or document — is like seeing an alligator in an aquarium. You get to see the alligator, but both you and it know it’s just kind of on display. But seeing those words on the page from which they emerged? Leafing through an original journal from, say, 1945? That’s like seeing an alligator lumbering around on the bank of a down east drainage canal. You get to see its habitat — you get to see it in situ. And you are much less likely to forget it has teeth.

“Basically, when you’re digitizing something, you’re seeing it in its original format,” says Kathleen Kenney, digital librarian at the State Library of North Carolina. “It’s authentic to the way somebody who saw it in 1945 would have seen it. It’s not just the text — it’s the font, it’s the advertizing, it’s the images. It all makes up a context for the actual text.”

Reading plain text gives you a glimpse of one aspect of 1945. Reading a digitized publication is actual time travel.

Many of you, like me, have a magazine or other publication someone salted away on the day you were born. I have a copy of LIFE magazine from June 22, 1959, the date of my birth. And if you searched online for the images, you could find the lovely photos by Mark Kauffman about life at Oxford, in England. But if that’s all you saw, you’d miss so much — you’d miss so much of what that magazine had to offer. You’d miss the car ads — for Studebaker and DeSoto. You’d miss the love letter to the American steel industry. That is, you’d get the photo essay, but you’d miss 1959. Sensing this, Google Books eventually digitized every issue of LIFE.

But not just Google. Another significant player in digitization is the State Library of North Carolina — Kenney’s employer. “We’ve been digitizing since about 2003,” she says, and if you check their website, you’ll see they haven’t been lazy. One thing they do is take in publications that Kenney says are “born digital — these are the publications created every year by state agencies” — reports on agriculture, the economy, the environment. These are easily made searchable by the public, since the documents have been digital all their lives.

But taking older publications and making them digital gives readers far more than their pure content: It makes that time travel possible.

Digitizing is, in essence, taking a photograph of a source, usually with an installation that has two cameras, thus shooting a two-page spread at once and making it easy to page through a publication online. Short of finding some way to capture a document in smell-o-vision to share that old-book smell, digitizing gives you everything about the source, from tattered corners to dog-eared pages — as well as ads, and letters to the editors, says Michelle Underhill, director of the library’s Digital Information Management Program. The library’s North Carolina Digital Collections  include searchable documents on everything from the Civil War to the Civil Rights Act, and you can read them from anywhere you are. New additions include letters from Gov. Richard Caswell, 1901 Confederate Pension applications, and, their latest digitization project: nearly every issue of the magazine you are reading right now.

“One of our most frequent questions deals with Our State,” Underhill says, and it’s always a variation on, “Oh, my grandmother was on the cover … I think it was sometime in 1955.” Which is a hard question for even librarians to answer. So Underhill knew she wanted to do a modern digitization of the Our State back catalogue, including using optical character recognition software to make the text searchable without making it easy to steal. The digitizing began soon after the magazine’s 80th anniversary, with help from a federal grant through the Institute of Museum and Library Services, and shows the magazine in its glorious completeness.

Consider the advertisements. Ads in a current issue of Our State tout things like banks, hotels, tourist agencies, retirement homes, hospitals. Put them together and you might say of the North Carolina of the 2010s that tourism is a major industry, that the state’s residents have wealth to invest, and that many of its residents are growing older and more concerned about their health and their retirement.

In the weekly issues from 1933 — which you can now see and search cover to cover — the ads tell a good deal about their times, as well: “Ellie didn’t know she had illusions about cigarettes until Jack persuaded her to try one of his Camels,” one says; on the page opposite, the Chatham Manufacturing Company reassures you that it weaves its blankets from the wool of North Carolina sheep. Carolina Power & Light urges you to consider streetlights for your town, and Quail Roost Farms in Rougemont reminds you that their bull “Prince” has bred a 27 percent butterfat increase in all his daughters. Under plus ça change, you might find Carolina Telephone & Telegraph Co. urging you to consider using your telephone for business (“It is always at your side; awaiting your pleasure; instantly ready to carry your message to near or distant points”), which, honestly, sounds like it could have been written yesterday. In any case, you would have no trouble recognizing the North Carolina of 1933 as a place of farms and textile mills, where electricity and telephone service were still new enough to need explaining.

Much the same, an early issue of The State has on its cover a picture of the Hatteras lighthouse, with an article worrying about whether it would remain safe from encroaching seas; another, in 1961, goes into significant detail about the pay of our teachers. Again: some things just never change.

The issues of the 1960s explode with ads for gasoline stations and the right kind of concrete for building roads; again — the ads tell the stories as much as the content does. “World War II, Vietnam, civil rights, school integration, busing,” Underhill goes on. “You will get some sense of how that was impacting North Carolina during that time. You’ll get some letters to the editor that …” she falters, trying to be polite.

But no need to worry. The nice thing about digitization is that as long as there’s an Internet, those magazines will now be available from anywhere in the world. Surely at some point in the future, unpleasantly reactionary letters to the editor will be a thing only of the past, and the North Carolinians will find them charming, living in their paradise of the future Old North State, where the lighthouses are secure, the teachers well-paid, and the advertisements all about how to gently stop people from hugging so often and singing “Kumbaya” in the streets and causing traffic jams among our autonomous flying cars.

But the point is, the resource is there. Kenney mentions that she recently digitized the premium list from the North Carolina State Fair for every year since 1853, so you should know that if in 1878 you won the prize for the most cotton grown on four acres of land (you had to generate at least 700 pounds of lint, but you got to display only a single bale), you won not only a half-ton of “hard salts” donated by a fertilizer inspector from Baltimore, but also a half-ton of guano — worth $27.50! — donated by the Navassa Guano Company in Wilmington.