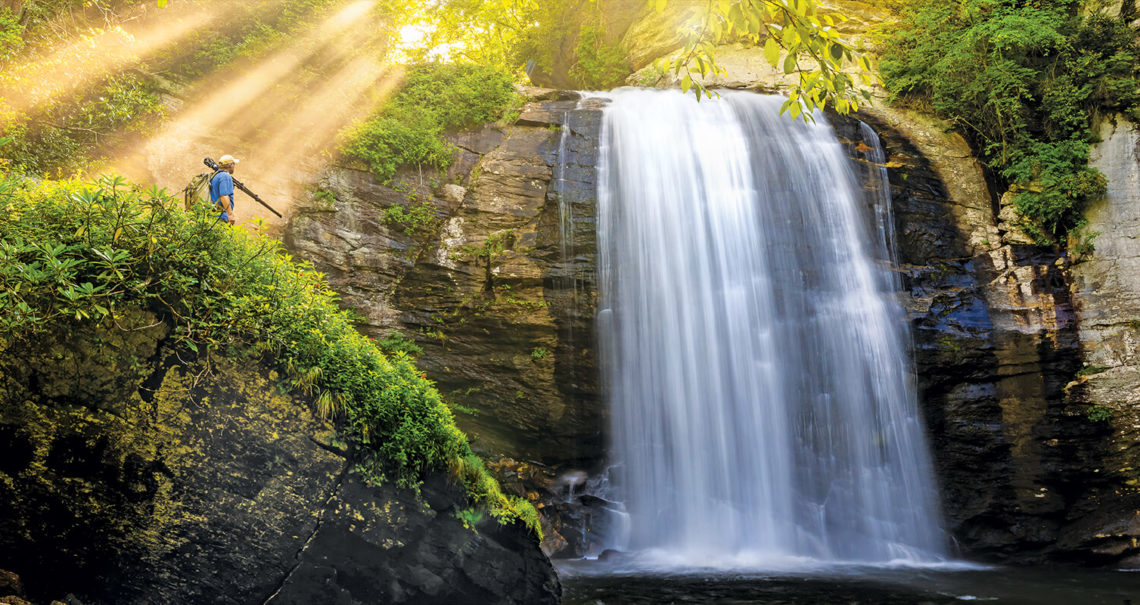 Tommy White knows that sometimes, to get the shot, you have to get off the beaten path. “This way,” he directs, gesturing to a barely perceptible dip off the laurel-strewn doubletrack. He descends, using his hands to part the thick green curtain of gnarled rhododendron. The drop down the slippery embankment is abrupt, but White navigates with forceful grace, grabbing on to roots and shimmying backward. He swats away a spiderweb and smiles. The web is proof of what tingles in the air — that we are the first humans here today. Finally, White steps into a clearing. The afternoon sun catches the mist, haloing what we came to see: Dill Falls, a 50-foot, boulder-buttressed cathedral of rushing, crystalline water. He takes a breath and bounds forward, rock-hopping until he is shin-deep, and then squats. “Safety first,” he says. “Taking a nasty spill in a creek — you don’t want to do it. I have scars to this day. And,” he adds with a chuckle, “I’ve killed two cameras.” Adventure. It’s what photographers like the Boone-based White live for in their pursuit of capturing a breathtaking waterfall.

Western North Carolina boasts an astonishing abundance of falls. Transylvania County, situated between Nantahala National Forest and Pisgah National Forest just south of Asheville, officially calls itself “Land of Waterfalls.” Hollywood has taken notice of the region’s stunning scenery, shooting films like The Last of the Mohicans and The Hunger Games in its unspoiled beauty. A drive through the Land of Waterfalls yields scores of enthusiasts squaring up tripods, angling for the perfect shot. Hikers pose at the base of falls, braving the mist for selfies. 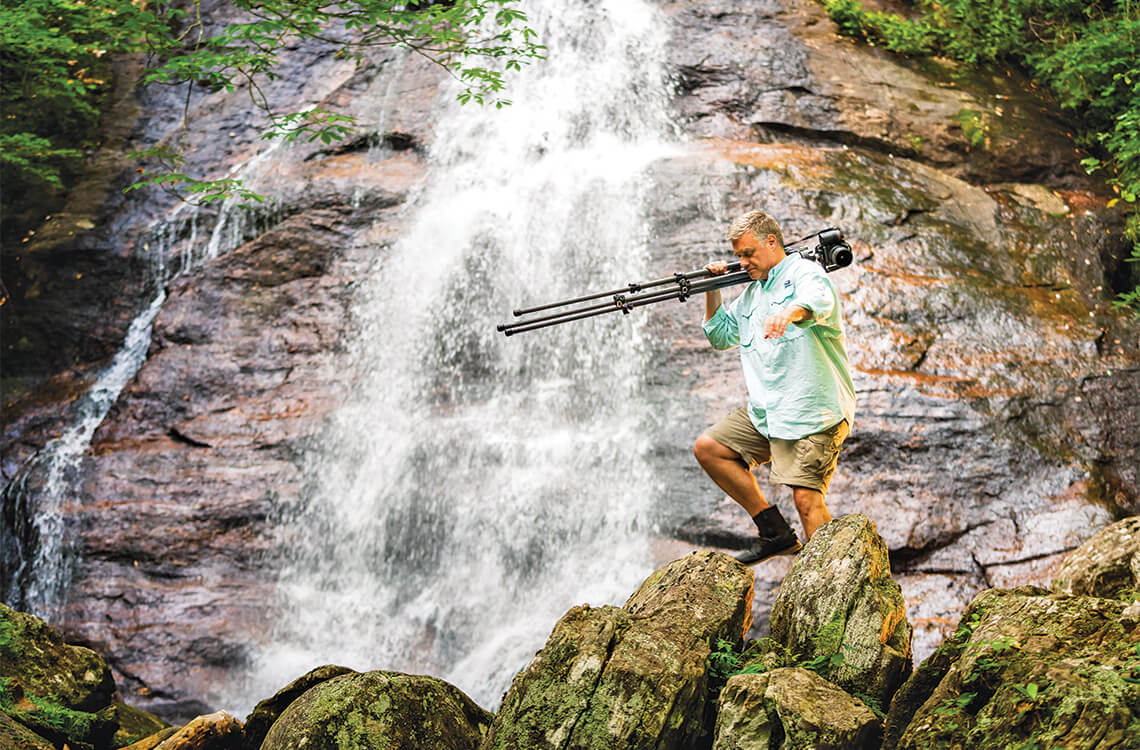 White, at Dill Falls in Jackson County, has learned to maneuver over slick rocks and through rushing water without sustaining too much injury to himself or his equipment. photograph by Thomas Moors

The hordes of cars parked at trailheads reveal that one needn’t be a big-budget filmmaker or a veteran photographer to appreciate or capture the beauty of falling water. Taking photographs of waterfalls, whether on an iPhone or an expensive DSLR camera, produces mementos of wonder. White says that a satisfying waterfall photo is the ultimate souvenir. It’s a way to “take it home.” But with their glistening rocks and constantly moving rushes, waterfalls can be wily subjects that test the mettle of even the most seasoned photographers. White remembers how discouraging it felt early on to snap a lackluster waterfall photo. “I decided that I wanted to help other people who are wanting to learn the craft and art of photography, so that they never have to go through what I went through,” he says.

White and his business partner, Alistair Nicol, run Mountains To Sea Workshops for aspiring photographers of all skill levels. They take small groups to waterfalls and provide them with immersive, one-on-one instruction, from scouting locations to safe rock-scrambling to setting up the shot. Often, to ensure that each attendee receives individualized attention, they’ll team up with a colleague like Thomas Moors, an affable engineer by day and an award-winning, published photographer by night — and by dawn. “It’s a lot of strange hours,” Moors says with a laugh. Because photographers are light-obsessed, and because it’s difficult to take good pictures in full sun, the schedule can be dizzying. “To do a sunrise photograph, you need to be there an hour before sunrise,” he says. “I’ve gone to bed and set my alarm for 3:30 a.m. so I can take pictures.”

A desire to learn the art of waterfall photography is how I end up out in the woods with White and Moors. The day starts early. Before sunrise, I’m standing knee-deep in Looking Glass Falls, balancing a DSLR camera on a tripod in rushing water. The creek feels bracing on my skin; the ink-dark forest around us is sleepy and still. Tall and jovial, with a good-natured Southern twang, White gently coaches me: “See this branch? It’s being friendly. But the one to its right is cutting a rug.” He adjusts my lens and frames the shot so that when the dawn rays break over Looking Glass’s famous drop, we’ll be ready. I nod woozily.

All of the movement that makes waterfalls so compelling also makes them difficult to shoot: You have to consider the kinetic elements, like wind-jostled branches and swirling grass. Long exposures lend falling water the silken, airbrushed quality that sets photographs by pros like White and Moors apart from those of hobbyists. While White helps me frame the shot, Moors darts around like a mountain goat, snapping photos of us at work. His agility is no coincidence. “It’s one of the reasons why I exercise and try to stay in shape,” Moors says.

When the sun breaks over the falls, Moors and White take off as if in trances, trudging closer, jockeying for better angles. Their wide-eyed wonder shakes me — sleep-deprived and under-caffeinated — awake. White sees things in the falls that I do not: Lines and colors emerge as if conjured into our lenses. He is unimpressed by the showstopping big drop, drawn instead to the geometry created by boulders along the falls’ edge. Without his direction, I never would have noticed this. 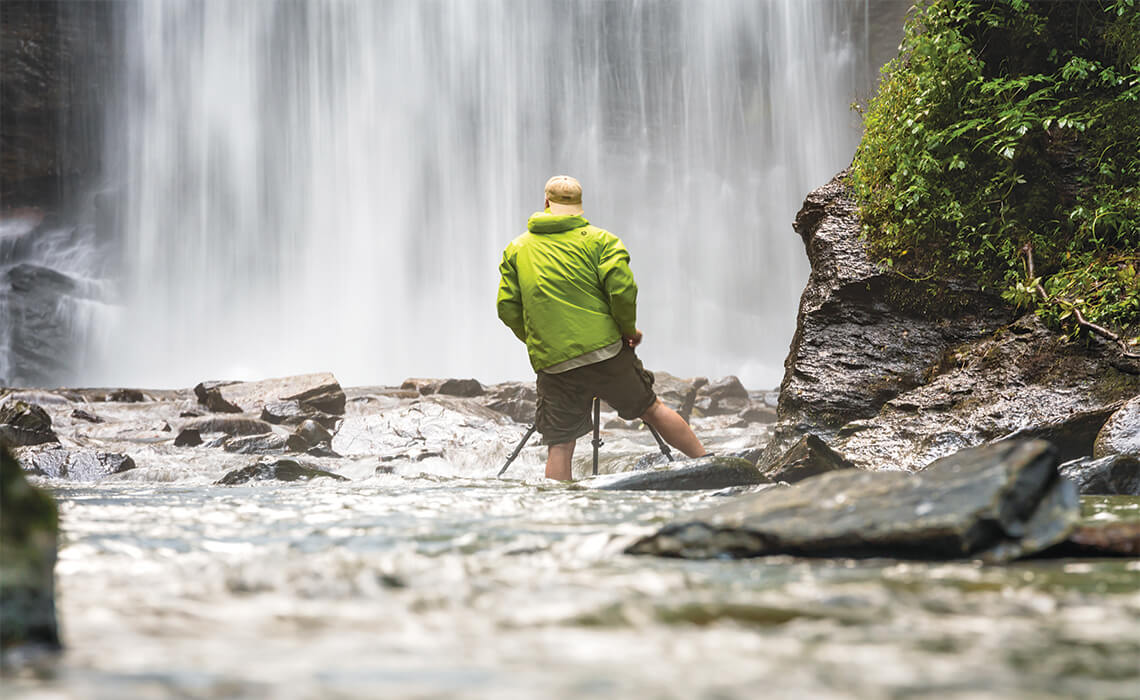 “The foreground here is so strong that the waterfall becomes a supporting element,” White explains. I nod and snap. By the time the sun rises, saturating Looking Glass in gold light as early-bird tourists arrive, Moors and White are ready to move on. “It’s dead,” White pronounces — meaning that beautiful hiking weather is terrible photography weather. We’ll have to wait for sunset to hit Dill Falls.

White remembers his first camera. It was a gift from his parents when he was in junior high, and he still has it. Moors picked up photography as an adult, when he wanted to snap Ansel Adams-like pictures of Yosemite National Park for his 10th wedding anniversary. For both men, photography is a journey, an obsession. Sharing their photographs is a way to share their perspectives of the natural world. “When I point a camera at a scene, I have the ability to record a unique vision and bring it home with me,” White says. For Moors, photography began as a way to document new places he visited. “Now, it’s turned into: Here’s a way for me to get to see more new places,” he says.

The thrill of discovery — particularly of an unphotographed waterfall — is addictive. “You have the noise and the movement and the lush vegetation,” Moors says. “You can get to a place that you can imagine not many people have visited. There’s that sense of anticipation. It never gets old.” White enjoys that quest, too. “It’s magical when you find a hidden waterfall on your own,” he says. “The first thought that goes through my head is, I wonder how many people have been here.” Which is why tagging along with pros like White and Moors is so special. They do the legwork — scouting locations, planning access — and they can equip their students accordingly.

At Dill Falls, sunset is imminent. The golden July skies are dampening down. Fallen laurel blooms festoon the trail. The air smells of moss and earth. More species of salamander live in these creeks than anywhere else on the planet. While we wait for the light to descend, I show Moors and White a few of the wriggly creatures that I find under rocks. When the sun rests on the crown of the falls, casting the water in shimmering light, the men set out in silent motion. They are as at home in these creeks as the salamanders, taking photographs of beauty more subtle than I can see. Twenty minutes after sunset, they’re still snapping pictures while the rest of the forest sleeps around them and the waterfall roars. 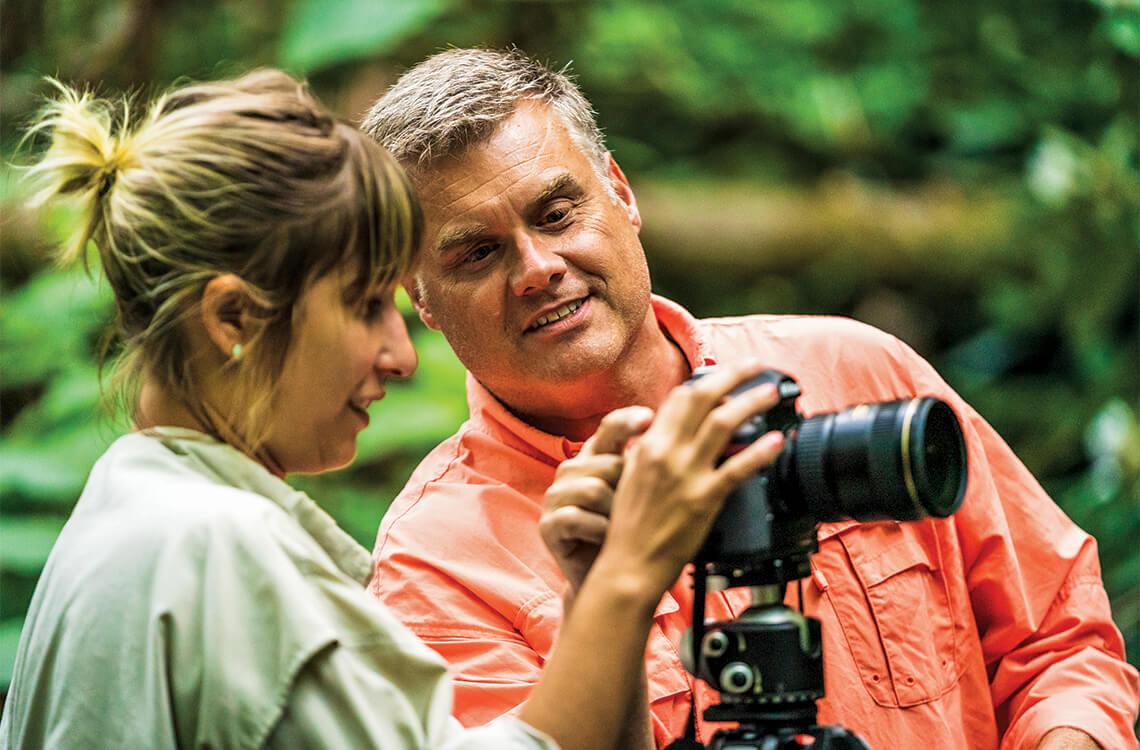 In his photography workshops, White offers tips to amateurs like author Morgan Sykes (left) on how to frame and capture fast-moving water. photograph by Thomas Moors