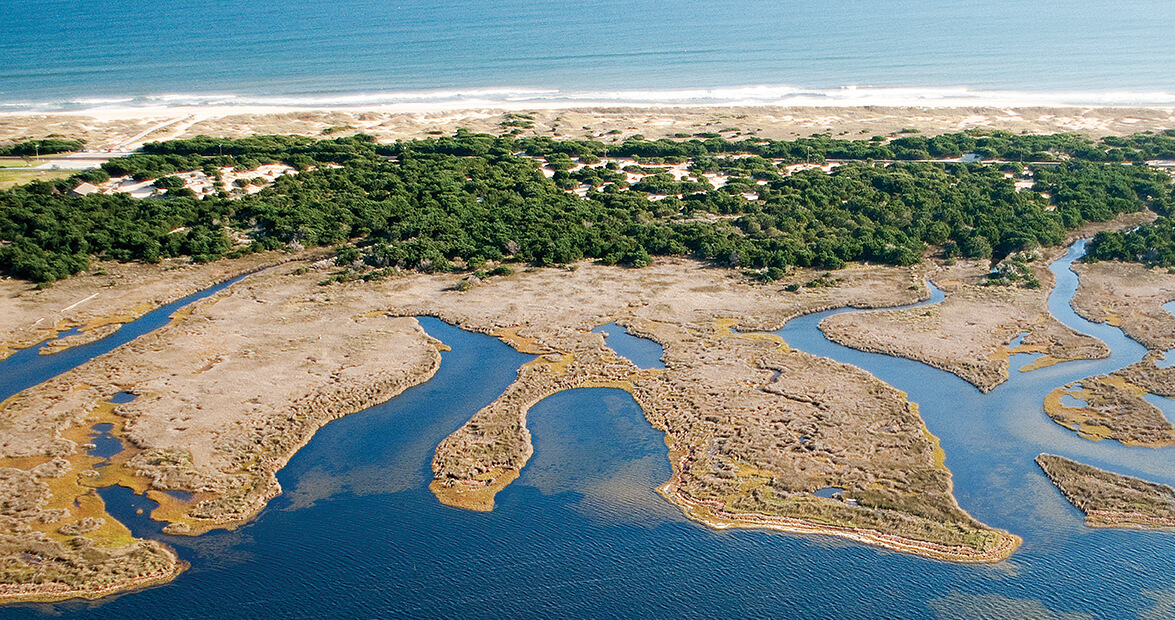 What does it mean to love a vulnerable thing? A thing that won’t keep still or remain the same?

I took the Cedar Island ferry to Ocracoke Island for the first time almost 10 years ago. On the boat, I became engaged in an animated conversation about birds with one of the deckhands. I pointed out a Northern gannet off the bow, a diving bird that migrates to Southern waters only in the winter.

From his emphasis on ducks, I assumed he was a hunter. Hunters are the only other group that knows birds as well as bird-watchers. We talked some more about what had been migrating through, and then he pointed ahead, to where 20 or so dolphins were swimming. Three veered off and headed straight for us, silver shining off their backs, and soon they were surf-riding in the bow right in front of the ferry. They were obviously doing it just for the fun of it, since they had originally been traveling in the opposite direction. Soon, other people got out of their cars and started snapping photos.

It was a delightful escort into the southern end of Ocracoke, and the delights continued ashore. I drove about halfway up the island before I pulled over at a beach access. The entrance was directly across from the pens that held the island’s famous Banker ponies, a species of small horse unique to Ocracoke that roamed wild on the marshes and beaches for centuries after they were left here by Spanish explorers. 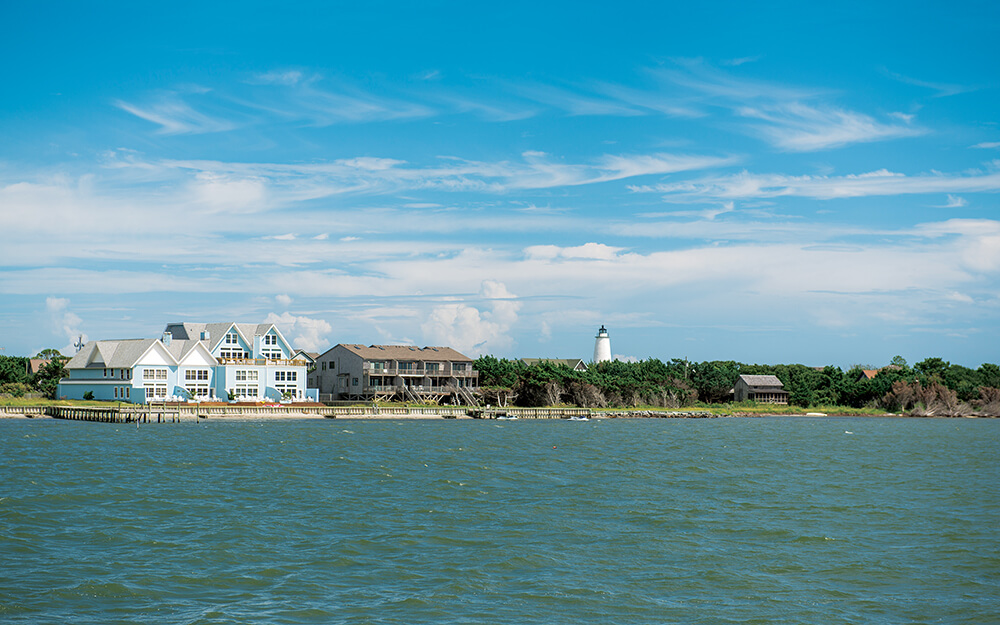 The ocean’s rhythm greeted me as I walked out to the beach, the roaring crash followed by the seething slide of the water’s retreat. Ocracoke is a narrow spit of land approximately 20 to 25 miles out in the Atlantic, and almost the entire island remains undeveloped, the government having purchased it in 1937 and then establishing it, and more than 70 miles along other Outer Banks islands, as a national seashore in 1953. There was an uproar from business interests at the time, but the fruits of that historic purchase were now obvious. While much of the rest of the Outer Banks was covered with T-shirt shops and billboards, the beach here was pristine.

The current threat to the island is not overdevelopment, but submergence. More than a few prominent coastal geologists believe that it will be underwater by the turn of the next century. Back when I first set foot on Ocracoke, I was still new to the state and had just begun my travels with Orrin Pilkey, the Duke coastal geologist who has long warned that buildings should be moved back from the shore. Orrin taught me about the way islands survive and change during storms, the way they handle hurricanes through a kind of elemental judo: storms push sand landward, and the island jumps over itself and grows on its back side. He would also tell me that if the predictions of the Intergovernmental Panel on Climate Change were correct — predictions he actually thought were too conservative — then Ocracoke faced a watery future.

But I wasn’t thinking about doom during my walk. A great cloud of gannets, the same type of bird I’d seen from the ferry, filled the sky 100 yards offshore. Northern gannets are long white birds with black wing tips that get their dinners by diving spectacularly into the sea. As I watched, they hovered far above the water like clouds before pulling their wings in to their sides and descending, straight down and fast, accelerating as they plunged into the water.

It was a pleasant surprise to find gannets in North Carolina. These cold-weather birds — these exclusively Northern birds, I had always falsely thought — hurling themselves into Southern waters, made me feel at home.

It was a couple of miles before I came upon another human being. A guy around my age was wearing waders and standing out in the water, surf casting. Had the beach been crowded, we would no doubt have ignored each other, but because it was just the two of us, we yelled enthusiastic greetings like long-lost friends. He told me he’d been catching red drum and blues earlier, but now he was after speckled trout.

“I’ve known this beach all my life. But every time I come down here, it’s a different beach, a new beach, in some way.”

I stayed on the shore while he stood in two feet of water, and we conversed over the crash of the waves. His name was Andy, and he wore a baseball hat pulled down low over his sun-browned face. In a few short minutes, he learned that I taught down at the university in Wilmington, and I that he had spent his whole life on this island. His accent was not particularly thick.

I told him that I was hoping to see a Banker pony on the beach. “Are all the ponies penned in?” I asked.

“Yeah, they had to do it once they built the highway,” Andy said. “They couldn’t have ponies becoming roadkill. The ponies got lots of room to roam still, miles, really, but I’ll tell you, it was something before they put the fences up. You could be standing out here fishing or out in the marsh clamming, and suddenly a horse would wander by.”

Andy wasn’t alive back when the government claimed the beaches as parkland, so I asked how his family reacted.

“Oh, my grandparents were very upset. Enraged, really. They hated being told their land wasn’t their land and that they couldn’t even hunt on it. But now look at what we’ve got. It’s hard to argue with this.” He held his free hand out, palm up, as if putting the beach and ocean on display.

I wasn’t about to argue. In these troubled days, it seems we rarely feel delight without accompanying anxiety. I already understood that, despite its beauty, all was not rosy with Andy’s home beach. Although I’d only just begun my travels with Pilkey, even an uneducated eye could sense the vulnerability of the land. On Ocracoke, creeks cut across the island, places where, with a quick glance, you could see the ocean on one side and the marsh on the other. It wouldn’t take much for these creeks to become rivers.

I could have asked Andy if he thought his home island would still be here when his grandchildren’s children were born, but the sun was on my face and I was feeling good, and I decided not to pursue that apocalyptic possibility. Instead, I asked him if it was possible to notice the beach changing day to day. He thought about it awhile and pulled on the brim of his baseball hat.

“I’ve known this beach all my life,” he said. “But every time I come down here, it’s a different beach, a new beach, in some way. Something’s changed, you know?”

I nodded. It might have been at that very moment that I decided I would be returning to Ocracoke. Soon. There are places you need a lifetime to warm up to, but other places you immediately sense are special.

We talked for a while longer, and then, by way of saying goodbye, I told him that I thought I might be falling in love with his island.

“You should move out here,” he said before I walked away. “You can quit your job and teach in our one-room schoolhouse.”

I laughed and waved goodbye. It was a long walk back to the car, but a good one. Before I cut up off the beach, I took one last look out at the white birds and dark blue water, already falling hard for this impermanent place, already feeling the usual mix of love and loss for the ever-changing land.