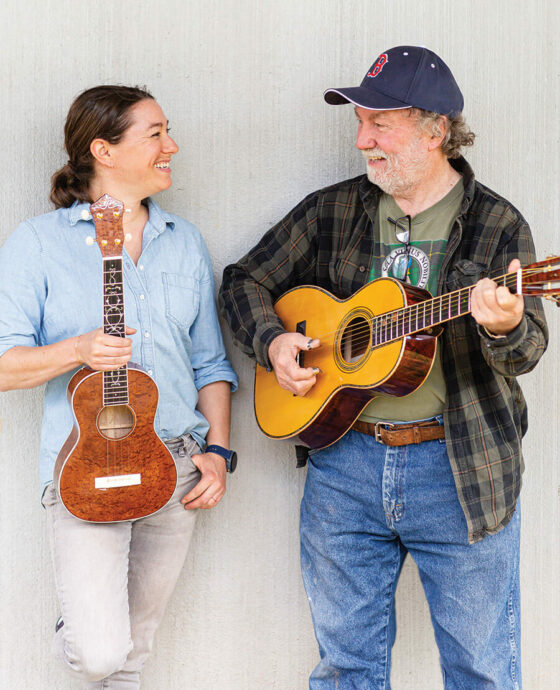 Tap two pieces of Brazilian rosewood together and listen: They’ll ring like a bell. That’s one of the many tricks that Jayne Henderson, owner of EJ Henderson Guitars and Ukuleles in Asheville, has learned from her father, famed luthier and old-time guitar player Wayne Henderson. The wood’s unique sonic characteristics make it highly sought-after by luthiers like Wayne, but Jayne, who left a career at an environmental nonprofit in 2011 to follow in her father’s footsteps, prefers local, sustainably sourced woods like maple, oak, and cherry. While Wayne’s instruments are traditional — he believes that prewar Martins are the holy grail of guitars and strives to make his in that fashion — Jayne likes to get creative with colorful inlays, including a kudzu vine motif designed for a friend who has goats.

Jayne has learned a lot about crafting guitars from her father and has developed as a luthier in her own right, but she says that the best thing to come out of her apprenticeship with Wayne is the strong bond that the two now share. “Of all the places I’ve gotten to play music, which are all over the world — Carnegie Hall, all kinds of places like that,” Wayne says, “nothing compares to getting to hang out in the shop with my daughter.” Jayne adds, “I learned not just guitars. I got to learn about my father, too.”

OS: Tell us a little bit about how you got into making instruments.

Jayne: Some people grow up knowing what they want to do, and I was sure that I wanted to be a doctor! I dressed up as a brain surgeon every year for Halloween, and I worked toward that goal until college. When I realized how math-heavy a career in medicine was, I decided to study law. After graduating and writing grants for a while, I realized that I didn’t like work where I couldn’t physically see what I was creating and producing. I approached my dad and said, “Hey, Daddy, can I make a guitar?” and he agreed to teach me. I thought it would be awful, but I wanted to make something with my hands. It turns out that, in making instruments, I was using my hands all day and I could see what I had created — and it felt incredible.

OS: What drew you toward crafting with local wood?

Jayne: My passion isn’t necessarily playing instruments, but the art of making them — making something that’s beautiful both inwardly and outwardly. I like to use all local wood to make my guitars and ukuleles, and I talk to my clients about the importance of that. They might not normally care about these things, but I can have a useful conversation with someone about why we might not want to use a more endangered wood, and why it’s cool that I’m using a wood that’s being thoughtfully harvested. I’m getting to bring life to something and turn it into something beautiful.

OS: We know that your dad contributed to your love for making instruments — how does your daughter, Matilda, inspire you?

Jayne: Matilda and I do most things together; she loves spending time in my shop, and it seems like a magical place to her. In my dad’s shop — which is a whole different world — he has this box of pearl buttons that came from a factory in Brooklyn. I have such distinct memories of digging through that bucket at her age and being so excited to discover new shiny things, so to watch her find those treasures — it’s a really beautiful thing. Matilda loves music now, but I’m so excited to encourage her as she begins to pursue any passion that she wants. I don’t know what her specific gifts will be, but my parents always encouraged me do the things I wanted to do and to make the things I wanted to make, and I want to do the same thing for her.

OS: Can you tell us about a favorite instrument that you’ve made?

Jayne: Several years ago, I came across this beautiful piece of oak, and I wondered if I could make a guitar out of it. When I took it to my dad’s shop, we could instantly tell that it was a rare and beautiful piece of wood. Around that time, Doc Watson was coming to my dad’s shop a lot, right around the end of his life. He really like to hang out with my dad while he built guitars. I got to spend some time with him because of that, which was really cool. He played a few of my guitars, and every time, he’d look at me and say, “I’m gonna tell you the truth about this guitar.” To this day, I don’t know if he ever did, because he was so sweet and supportive of what I was doing, even on those early instruments. One day I told him, “I’ll make you a guitar out of this beautiful oak that I have,” and he said, “Honey, whatever you do, I’ll love it.” The guitar that I made for Doc was my seventh guitar. I had completed the body and didn’t have the neck done when Doc died back in 2012, but he got to feel the body of the guitar as I was working on it. Now I have that guitar, and I’d like to think that in some way, he gave it to me. One of his biggest pieces of encouragement to me was that he wanted me to learn how to play guitar like my dad. Now I have a guitar to learn on — one that was intended for Doc — and that’s pretty special.