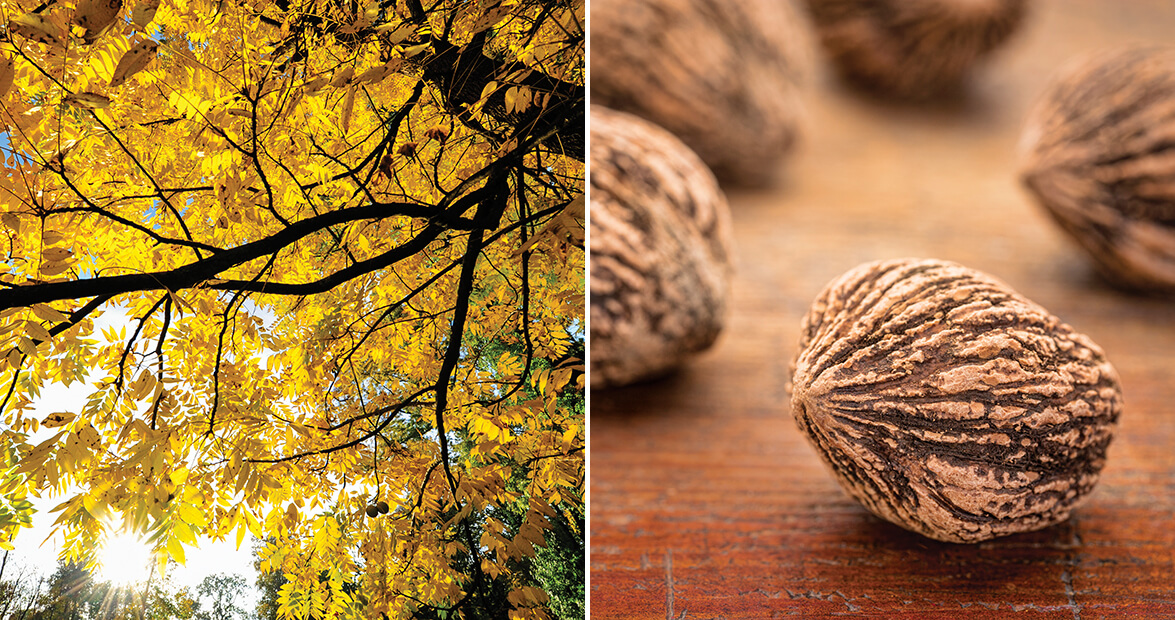 Black walnut trees aren’t as common as they once were in North Carolina. Great numbers grew wild in our forests and backyards, and along our mountain slopes, where they provided wide swaths of shade all summer, and luminous yellow foliage come fall frost. Their superior hardwood went into some of the most gorgeous, durable furniture to come out of the storied North Carolina factories during their heyday.

While growing among the leafy branches, black walnuts aren’t black, at first, but a bright lime green. One doesn’t climb up to harvest black walnuts. Instead, we must wait for them to drop to the ground, where it might look as though someone has hit a case of green tennis balls at the trunk with surprising accuracy. Once on the ground, the outer husk quickly darkens, and the nuts are so hard that they feel made of stone. It’s little surprise that one of the cultivars is called Cannonball; it produces fruit so large that people tell of a single one weighing as much as a pound.

From around late September to early October, gatherers with sturdy backs pick up the nuts by the bushel, and hope to avoid becoming cannon fodder. Black walnuts need to ripen a few weeks before they’re ready to hull and shell. Then the hard part starts.

Black walnuts aren’t friendly, but if you put in the work, they’ll love you back.

It takes brute strength and tenacity to bust open the outer hulls. Some people crush them between stones, stomp them with big boots and brogans, or go at them with mallets and drills. Others strew the nuts on driveways or other hard surfaces, and then drive slowly over them, although that process tends to scatter the results.

The walnuts leave messy evidence of this struggle. The pigment that once made them excellent dye for homespun cloth leaves dark, chocolate-colored stains on skin, and sinister smears on carports and porch steps. Like a chalk outline at a crime scene, we might not know what happened, but it’s clear where it happened.

When the hulls are off, it’s time to battle the hard, woody inner shells. Again, some people attack with mallets and such. Others use a type of levered nut-cracking contraption that looks medieval, followed by a set of metal nut picks and Barlow knives to wrest out the bits of edible nutmeat, the spoils of victory.

Even after all that toil, not everyone likes black walnuts, believing that they taste rancid, or simply too strong. But we who love them swoon over their earthy, tannic, musty, dark-and-stormy flavor — the very qualities that turn others away. That doesn’t mean, however, that we aren’t partial to putting black walnuts in desserts to sweeten the deal.

No matter how modern the recipe, black walnuts taste old-timey and sentimental, as though even their flavor is sepia-toned. Many who love black walnuts have done so since they were small children, when a grandparent offered that first golden nugget. Black walnut love is often passed along from someone who regards them as a special treat, and appreciates how hard they are, or were, to come by.

We can now purchase bags of ready-to-use black walnuts, and there’s no doubt that they’re a time-saver, but it would be a shame if convenience made us nonchalant and entitled. From tree to table, black walnuts tolerate no ambivalence.

Black walnuts aren’t friendly, but if you put in the work, they’ll love you back. 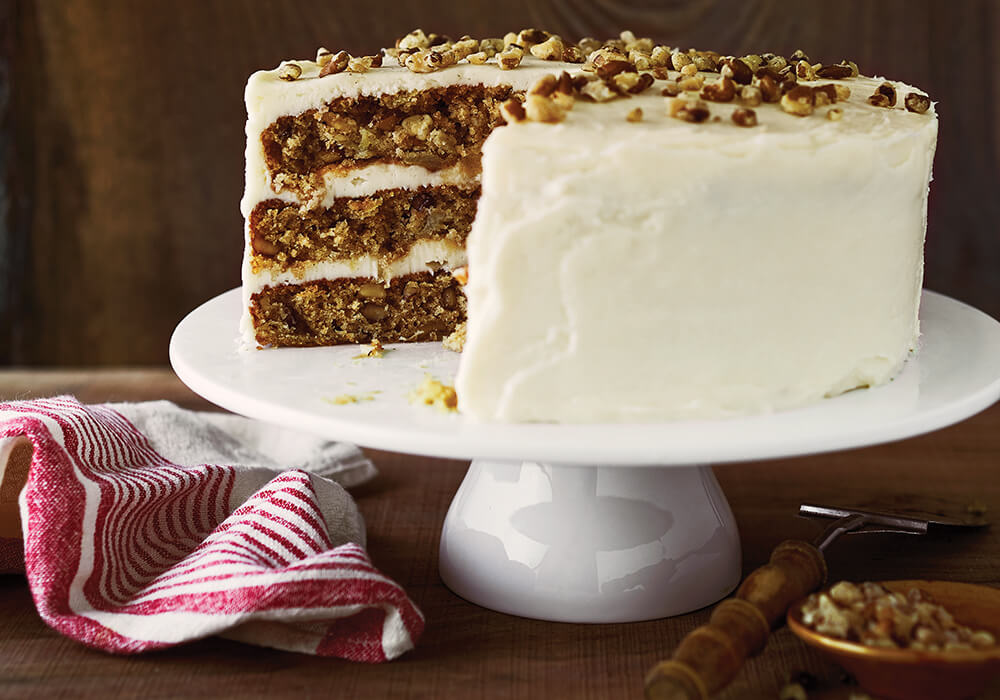 A raw plank of black walnut wood from Asheville Hardware makes the perfect stage to show off this nutty, fruity cake. photograph by Charlotte & Johnny Autry

Hummingbird Cake quickly became a Southern classic after it appeared in Southern Living in 1978, submitted by Mrs. L.H. Wiggins of Greensboro. Unlike most fancy layer cakes, the batter is stirred together in one bowl, with no need for an electric mixer. Although the many recipes for Hummingbird Cake are remarkably similar, a few tweaks won’t wreck it. Some bakers add a little coconut. Others add a pinch more spice. Some call for self-rising flour. In this version, the traditional pecans are replaced by black walnuts.

The origin of the cake’s charming name has puzzled many a home cook. Some say it’s as sweet as hummingbird nectar. The likeliest theory is that a precursor to this fruity cake originated in Jamaica, where a hummingbird is a national symbol. It didn’t take long before visitors from America clamored for the recipe. Jamaicans obliged, and the recipe was included in press kits to promote tourism. Bananas and pineapples may not be North Carolina natives, but we’ve given our version a local, seasonal twist (and a new name) with black walnuts.

For the cake: Heat the oven to 350°. Grease (with shortening) and flour three 9-inch round cake pans.

Whisk together the flour, sugar, salt, baking soda, cinnamon, and nutmeg in a large bowl. Add the eggs and oil, and stir only until the dry ingredients disappear into the batter; do not beat. Stir in the vanilla, pineapple, walnuts, and bananas.
Divide the batter among the cake pans. Gently tap the pans on the counter to remove air bubbles.

Bake until a wooden pick inserted in center comes out clean, 25 to 30 minutes. Place the pans on wire racks to cool for 10 minutes. Turn out the layers and cool completely on the wire racks for 1 hour.

For the frosting: In a large bowl, beat the cream cheese and butter until smooth with an electric mixer at medium speed. Gradually add the powdered sugar, beating at low speed until light and fluffy. Quickly beat in the vanilla.

Spread 1 cup of frosting between the cake layers, stacking them as you go. (For the most attractive layer cake, place the first cake layer bottom-side up and place the final cake layer top-side up.) Spread the remaining frosting over the top and around the sides of the cake. Pat the walnuts over the top. Store refrigerated in an airtight cake carrier.

Tip: The bananas are diced, not mashed. For the best texture and flavor, use ripe bananas that are evenly freckled with brown spots.

That’s Just the Frosting on the Cake
Before frosting a cake, place a few strips of wax paper or parchment paper around the edge of the cake plate or cake stand to keep it clean. Use a soft pastry brush to lightly sweep any loose crumbs from the top and sides. Spread a very thin layer of frosting (often called the crumb coat) over the cake to set any remaining crumbs. Frost the sides and then the top. Carefully pull out the wax paper.