They surrounded me as a teenager. One waited down Townsend Road, past my great-great-grandparents’ house and the cemetery where I’ll end up one day. Out Gilliam Road, where the church bells ring “What a Friend We Have in Jesus” through the cornfields, sat another. Then, in the sharp turn on Fruitland Road, beside a herd of indifferent cows, another stretched out above the creek, empty and waiting. Before each of them stood the signs — faded orange diamonds suggesting something’s not quite right here, wearing those three bold words: One Lane Bridge.

To go nearly anywhere as a young driver, I passed one of those signs to then contend with a bridge too small to hold much more than me. I learned no rules for situations like these in my driver’s education class. There were no questions on my licensing exam about what to do if you’ve just passed John Henderson’s house and Donald Edney’s truck is coming down the hill from the church ready to cross Clear Creek on that low-lying bridge that isn’t big enough for the both of us. But I learned. Soon enough, I knew that to approach a one-lane bridge meant slowing — or altogether stopping.

Today, decades after my driving test and with thousands of miles logged from Canada to Central America, I realize that, more than anything else on the road, I love the one-lane bridge. It is a butterfly stitch for broken ground, a funnel for busted-up Fords. It is a call to slow down and breathe deep. To look out. But more than any of this, the one-lane bridge is a lesson in ethics. A real-time examination of how we treat our neighbors, how we take up space in the world. Had there been one-lane bridges in Nazareth, Jesus might have told parables about them because those three words on a back-road sign may well make you a better person and the world a better place.

The one-lane bridge is stubborn. It exists outside the rules of the road — a rebel rarely trod upon. It has no lines and is likely made of timber and asphalt, hemmed in by half-hearted guardrails, paint chipping. The rest of the world moves on, but the one-lane bridge lies there comfortable in its old age. It might not be pretty, but it’s a practical fix: a sign that this road isn’t all that important unless you live up that way or back yonder around the curve.

My dad proposed to my mom on one, kneeling in view of the barn, sure they’d not be disturbed on that rarely ridden road. He was right. No one came, she said yes, and now I’m here to tell you what a one-lane bridge might reveal about the world. 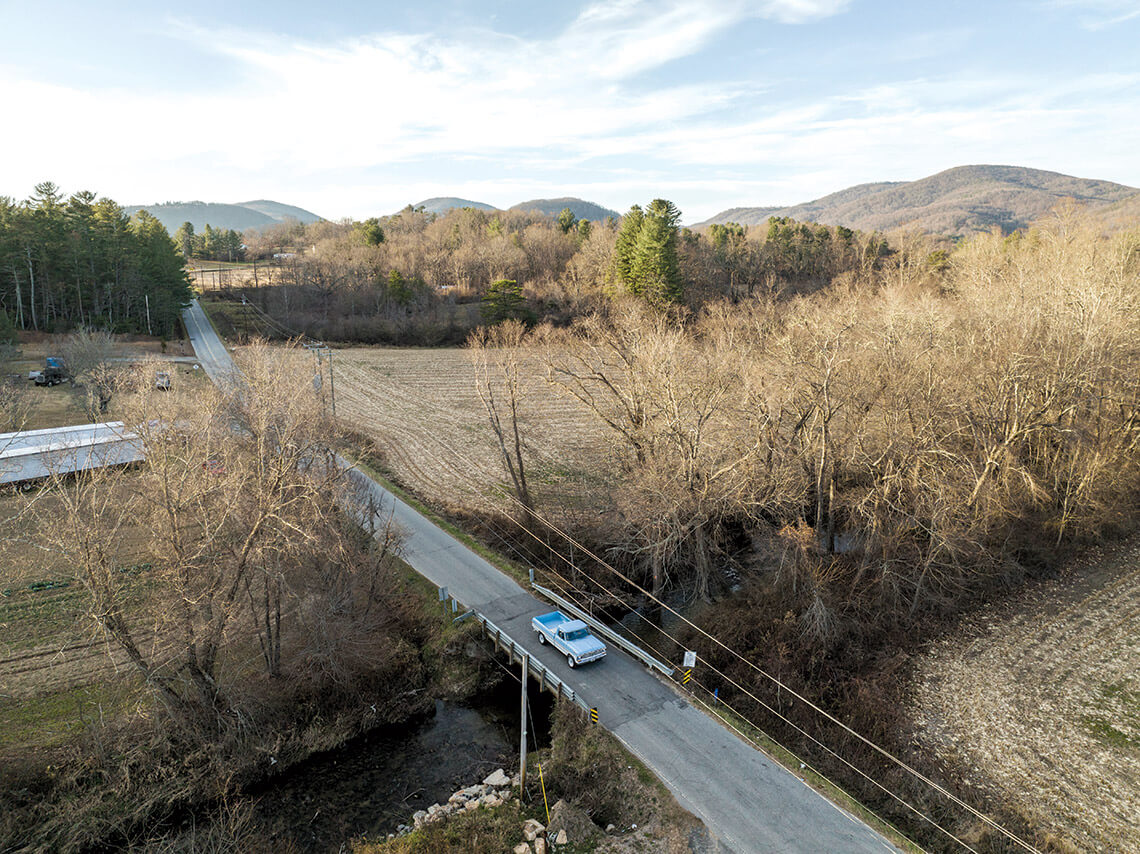 For one thing, if you’re not from around here, there’s a good chance you’ll be found out down on South Mills Gap Road. The local is slowing by instinct, easing down the hill to survey the world as if the bridge is an eternally yellow light, a speed bump with no hump. But you’re rushing on, perhaps already on the bridge deck before you recognize the narrowness and mash hard on the brakes. Or maybe you whiz right through, never noticing the old-timer lifting a few fingers from the steering wheel as you blow by.

If you’re like me, a one-lane bridge will also tell you something about yourself, about your raising. Out there on that empty road, calculations are made. Not only Can I make it? but also Why should I? You might wonder, What makes my errand — what makes me — more important than the lady waiting across the creek? Just before reaching a one-lane bridge, those words from the little church up the hill about the first being the last tend to rise up from nowhere.

Done wrong, crossing a one-lane bridge is a game of chicken. Done right, it’s a reminder that you’re but one of many travelers on this curvy mountain road, and, really, what’s the hurry?

For the past hundred years or so, North Carolina has been known as the “Good Roads State,” a place that takes pride in how we get around. I have a theory that this is partly thanks to envy. Back in 1899, a group of leaders in Asheville met to talk about the county’s roads because they’d seen the work that young George Vanderbilt was doing over on his Biltmore property, and, well, why shouldn’t we, too, have roads that nice? They launched a Good Roads campaign that night, an effort to improve the washed-out and overgrown roads and bridges rattling the region’s horse-drawn carriages. It caught on.

So did cars. Before long, Good Roads associations were formed across the state, and a decade or so later, Gov. Locke Craig declared a two-day state holiday for everyone to work on the roads. The U.S. Department of Agriculture sponsored a Good Roads Train to travel to other communities and teach people proper road-building techniques. Everyone rolled up their sleeves for better roads.

The one-lane bridge is a butterfly stitch for broken ground, a funnel for busted-up Fords.

Well, not everyone. There were some who longed for simpler times, for the carriages and narrow passes. Some parents feared what automobiles would bring, calling them “brothel wagons.” But mostly everyone else welcomed the straighter roads and sturdier bridges, the ease of transportation.

I’m not saying that I would have been calling cars brothel wagons had I lived in the 1920s, but I might have been one of the resisters, gazing backward to the days of clopping down the road on horseback and wondering aloud if we really need this so-called highway. What, I might have been saying to a stranger on the corner, really makes a road good?

Alas, they are dying out. Most one-lane bridges in North Carolina today are obsolete; only 320 or so stretch over creeks and rivers across the state. Their timber can’t compete against concrete and steel, and many are being replaced. The new bridges are, of course, wider. They’re lined and smooth, presenting no need to slow down upon approach and grow existential.

I know it’s silly to be nostalgic about old bridges. What kind of a man sits around and worries that his children will never have to stop after passing John Henderson’s house to look across the creek and consider the nature of life? That they’ll never know the one-lane bridge as the perfect hiding spot for a country marriage proposal?

Silly or not, I’m not alone in these feelings. Over in Franklin, community members signed petitions to keep their one-lane truss bridge over the Little Tennessee River when it was set to be replaced. The Department of Transportation agreed to leave the McCoy Bridge standing, opening it to cyclists and pedestrians, and then built a newer, wider bridge downriver for cars. In Flat Rock, a group of neighbors decided that they loved their one-lane bridge so much, they’d rather keep it than replace it. They opted to let it remain until it’s no longer serviceable by the DOT; the bridge is still open today.

I know a one-lane bridge isn’t much. It’s simply a crossing narrower than 18 feet. That’s it. That’s all that separates it from every other bridge in the state. But that smallness has taught me plenty about the big world around me and who I want to be in it. And so, even as it is torn down or tucked away downstream, I will forever sing the praises of the one-lane bridge. Old Bridge, I have seen that you are good.