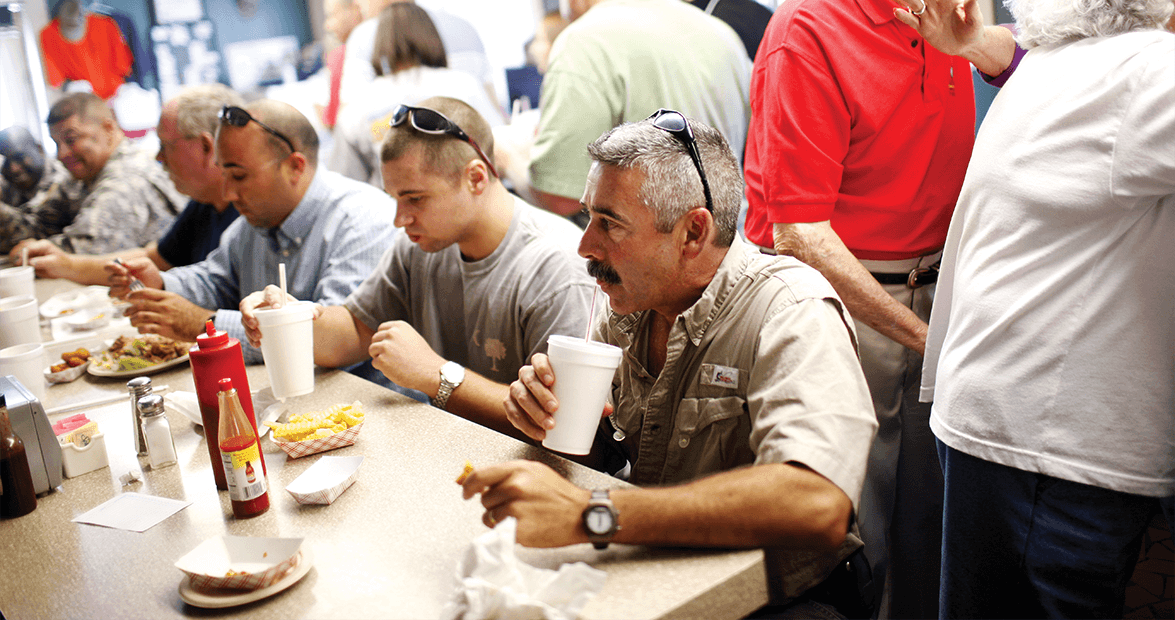 The highway that passes within fifty yards of Lexington Barbecue’s front door used to be a part of Interstate 85 between Greensboro and Charlotte. However, many years ago, I-85 was relocated so that it now bypasses Lexington several miles to the east. But owner Wayne Monk never lost a dollar’s worth of business when the interstate moved because, to the faithful, all roads still lead to Lexington Barbecue.

Today, Monk, his son Rick, and the many family members who work with them are not only the undisputed barbecue chiefs of Lexington — a town with twenty or so barbecue places, depending on the day or week you’re counting — they’re also perhaps the most widely known of all North Carolina’s barbecue restaurateurs.

The meat is the thing here — enhanced to perfection by a dark, rather thin sauce, or dip, that is neither too mild nor too fiery. The meat’s reputation is reflected in the restaurant’s unusual clientele. While all of Lexington’s barbecue restaurants get their fair share of trade from local customers — who tend to stick with one favorite place — Lexington Barbecue attracts barbecue pilgrims from across the state and even farther. 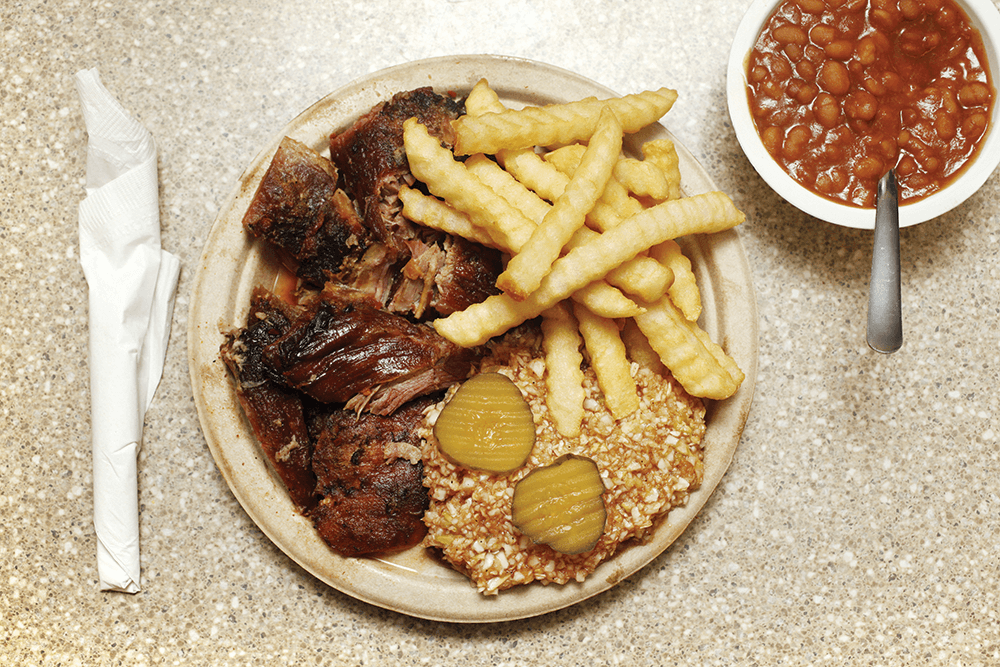 Rows of shoulders line the pit at Lexington Barbecue. After cooking, that outside “brown,” as it’s called, will be lifted off the meat and saved for special orders. photograph by Travis Dove

A fortuitous series of circumstances helped the place achieve its current position. But Monk, who still serves as chief spokesman, will tell you that the real luck came in the fact that he was a natural hard worker and that he chose the right man to imitate. In Warner Stamey — a pioneer in establishing Lexington barbecue — Monk found a mentor who exuded both pride in the craft of barbecuing and a strong drive to achieve excellence. Today, Lexington Barbecue is one of at least three venerable barbecue places in the Piedmont that owe their existence to Stamey’s ideas.

Monk got his first restaurant job as a 16-year-old carhop at a Lexington barbecue joint. At the time, he was more interested in hot dogs and cheeseburgers and didn’t really understand what attracted people to barbecue. During the next ten years, Monk “bounced around a good bit,” working a variety of jobs. He spent several of those years working directly under Warner Stamey at his place in downtown Lexington. Monk began to absorb Stamey’s vision of Lexington-style barbecue as a legitimate, distinctive, regional specialty and gradually came to appreciate Stamey’s talent for surrounding himself with good, reliable people who shared his enthusiasm for the product and its demanding method of preparation.

In 1962, with considerable experience under his belt for a man of twenty-six, Monk had a lucky opportunity to buy a prime, roadside location beside U.S. Highway 29/70 — the same spot his restaurant has occupied ever since. Ironically, both Stamey and Holland Tussey, another former boss, owned the parcel previously, but neither had ever done anything with it. Monk, on the other hand, has not only made a go of it, but also added on to the place five times over the years.

Monk’s early good fortune held. Right after he opened the restaurant, it became popular as a teenage hangout. However, he soon realized that spending late-night hours with a restaurant full of high school kids was exhausting and not particularly profitable. With a fresh image in mind, Monk worked hard over the next several years to reposition the restaurant as a place that caters to families and is devoted to the slow, painstaking preparation of succulent meat — barbecue that would later have much of the state beating a path to his door. 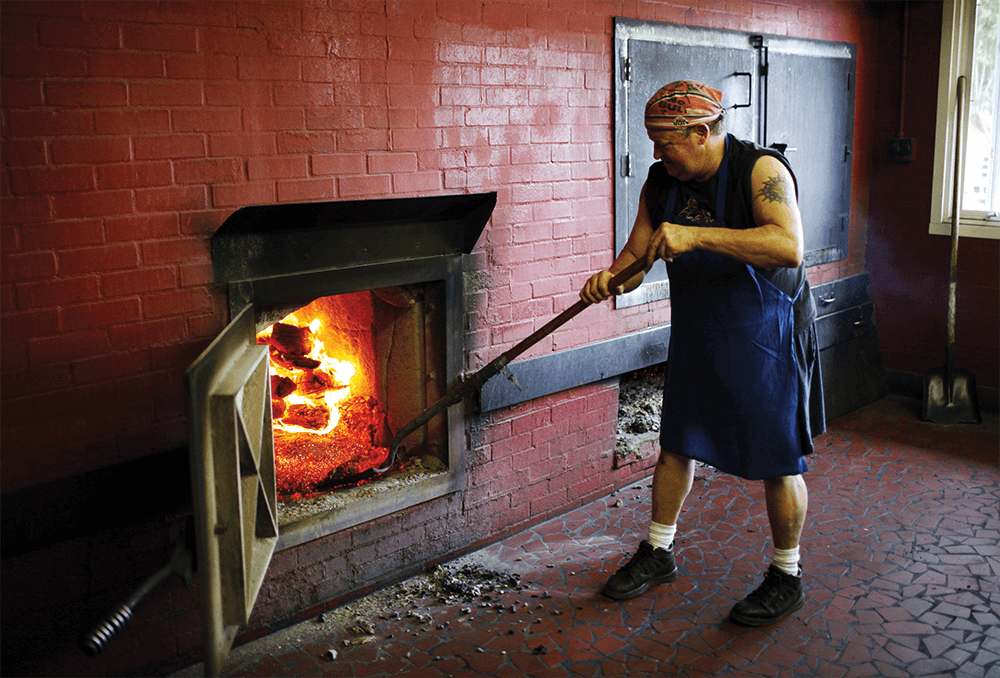 Roasting pork is not a job for the weak-armed: Pit master Rick Earnhardt pulls coals from the firebox. photograph by Travis Dove

On the pits at the back of the restaurant, pork shoulders roast for ten hours over mostly oak coals; hickory is added when available. Veteran attendants shovel fresh coals from the fireboxes and scatter them under the dripping meat every thirty minutes or so. They turn the shoulders so that the exposed meat side is facing up once it has roasted over the embers to a deep, dark brown.

The barbecue itself is so outstanding here that the side dishes assume a purely complementary role. In fact, the barbecue is good enough to have been served to world leaders. In 1983, Monk was asked by a politically connected local attorney if he would be interested in preparing barbecue for President Reagan. Not thinking much about it, Monk answered in the affirmative. The next thing he knew, he was booked by White House staffers to cater a meal for the heads of state of the world’s seven leading industrial countries. A major economic summit meeting had been scheduled in Williamsburg, Virginia, and the president wanted to introduce his guests to genuine American cuisine. Monk was chosen to introduce the likes of England’s Margaret Thatcher and France’s François Mitterand to North Carolina barbecue. Undaunted, he flew to Williamsburg and served the meal without a hitch.