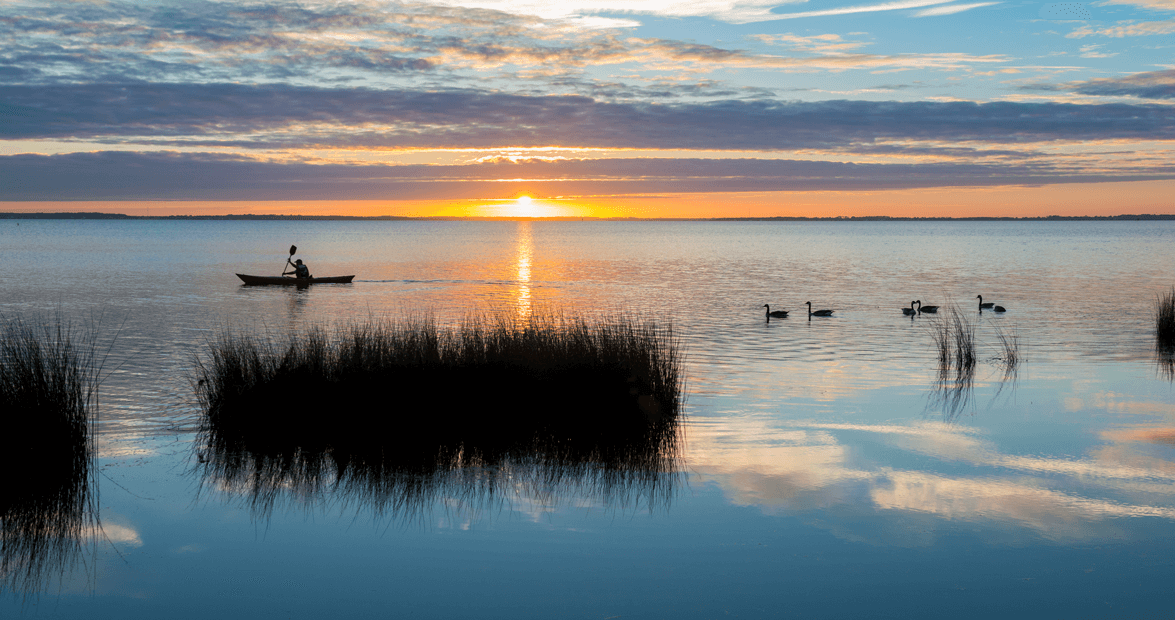 Will Freund, a Corolla photography instructor and Wildlife Education Specialist at the Outer Banks Center for Wildlife Education, kicks off his class with a little-known fact among vacationers: Currituck Sound is made up of almost completely fresh water. “Yes, it’s connected to the ocean,” he says, “but the connection point is Oregon Inlet, 40 miles south of where we are.”

That makes the sound one of North Carolina’s largest bodies of fresh water. “We get waterfowl in the hundreds of thousands in the winter,” Freund says. And that makes Corolla a big draw for birdwatchers, who come to the Outer Banks when it gets chilly to see 10 different species of ducks and geese, including snow geese and tundra swans.

In Corolla, wildlife teems at every turn all year long. It’s one thing to watch with wonder, but it’s another to jump in and experience it firsthand. Whether you’re looking through the lens of a camera or perched at the water’s edge, read on for three experiences that give Corolla vacationers a true taste of the island’s natural treasures and time-honored traditions.

View wildlife through a new lens

Freund grew up coming to the Outer Banks with his family. His dad, also a professional photographer, taught him that through the eye of a camera, even amateurs get a unique view of Corolla’s wildlife. They spend more time in one spot than they might otherwise, pausing to notice the island’s natural treasures. “You get more of the story,” Freund says.

For example, positioned along the Atlantic Flyway — one of North America’s major bird migration routes — the Outer Banks hosts two to three hundred bird species throughout the year. As they stop for food as they make their way south, these birds beckon artists who long to capture their annual visit on film.

Fancy technology is no prerequisite for Freund’s class, offered through the Outer Banks Center for Wildlife Education. “Whatever type of camera you have, I go over the different settings and modes. So even if you’re using your phone’s camera, you learn the techniques you need to get a fantastic shot.”

At every turn, Corolla’s coastal views are framed by photo-worthy flora, like evergreen live oaks. And along with the island’s waterfowl, marine mammals make their way into plenty of pictures, too. “There are lots of whales just off the coast. Standing on the beach, you can see their waterspouts,” Freund says. “Earlier in the year you get seals. People love to take photos of the young ones, who come up on the beach and rest in the sun every spring. On rare occasions, we will even get manatees in our sound.” 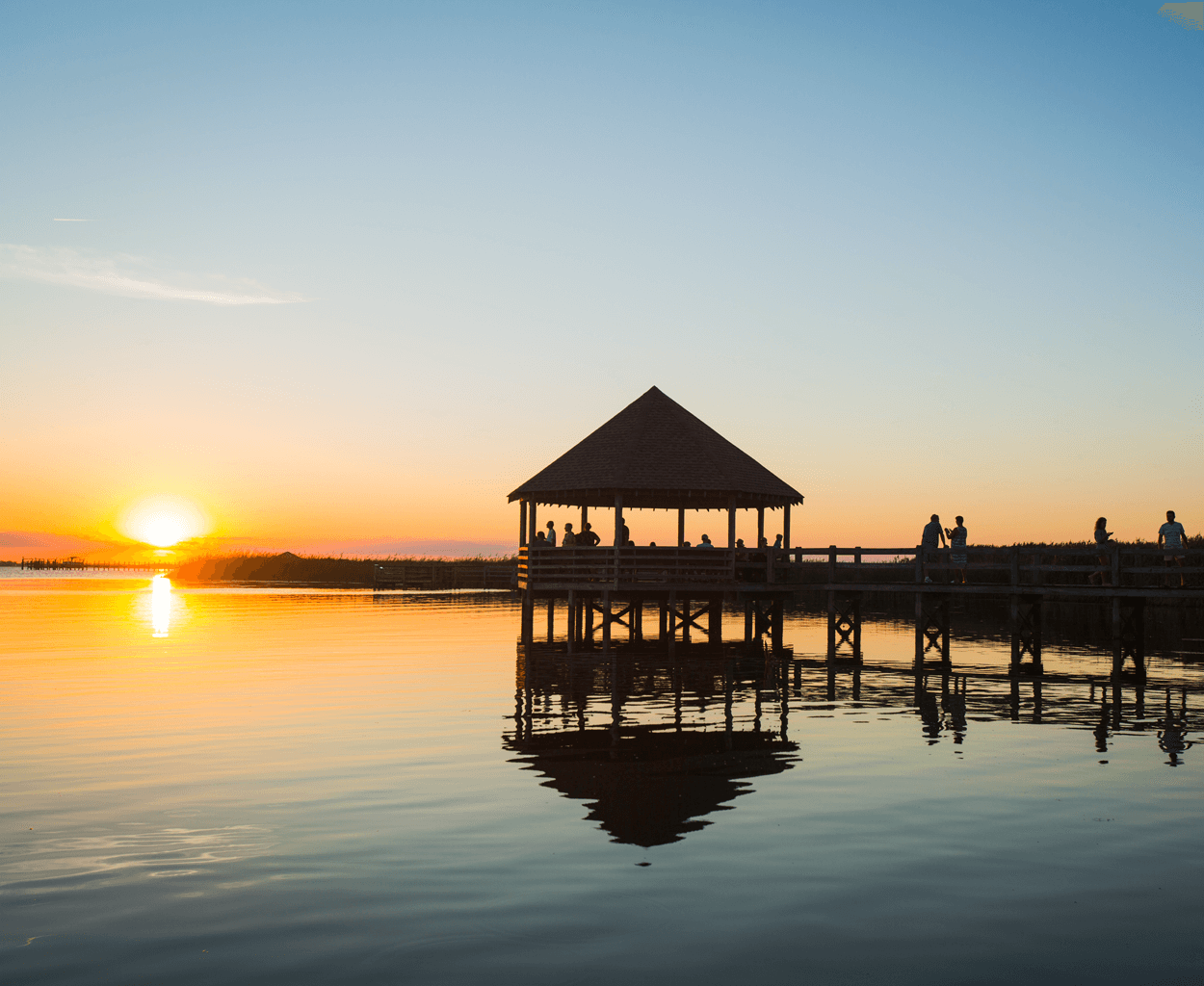 Walk out along Corolla’s piers for stunning sunset views. photograph by Currituck County Department of Travel and Tourism

Try your hand at hand-lining

In the shallow waters of the Currituck Sound, a sweet local delicacy swims within reach — blue crabs. All you need to catch your fill is a weighted fishing line, a handheld net, and some bait. The locals’ time-honored secret to luring their beloved blue crabs? Chicken meat, says Hadley Twiddy, owner of Coastal Explorations. “Specifically, people used chicken necks because it was the cheapest thing you could get at the butcher shop — and it’s fat, dark meat,” she adds. “The oilier the bait, the bigger slick it puts out. That’s what draws in the crabs.”

Supplies in tow, head on over to the boardwalk at the Historic Corolla Park and join the other “hand-liners” — Corolla speak for people who crab with a weighted string rather than a crab pot. “People crab all day long over there, just for fun,” Twiddy says.

Toss your baited fishing line into the water and wait for a tug. When the line starts to tighten, pull it out gently so you don’t disturb the crab. Once you’ve got it close to the water’s surface, scoop the crab out of the water with your net. If you want to keep it, check to be sure it meets the state’s minimum requirements, between 5 and 6.75 inches. “The Wildlife Center puts little crab measuring devices all over the dock so that you can measure it,” Twiddy says. 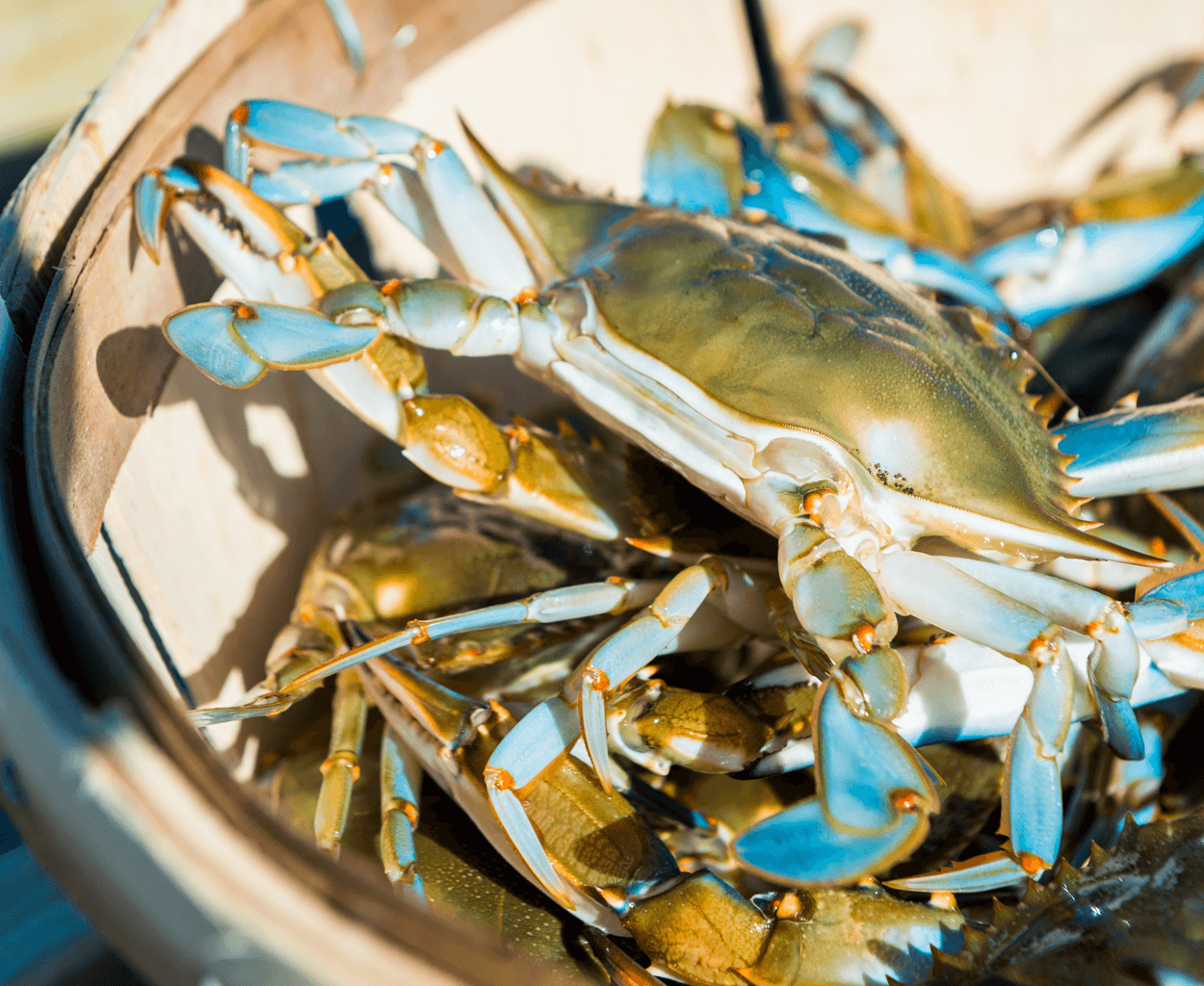 When visiting Corolla, fishing for blue crab is a must. photograph by Currituck County Department of Travel and Tourism

You can go crabbing any time of year, but you’ll have the best luck — and the most fun — in late spring when the water warms up. “That’s when the crabs really start moving,” Twiddy says. “Old-school commercial crabbers say the first full moon in May brings the most crabs, who are heading to shallow water to molt.”

The best part about crabbing comes later, after you’ve returned home with your catch. “When people really love crabs, part of what they love is picking the meat,” Twiddy says. “That’s their summertime feast — gathering family around a table full of crabs, sharing in the experience of picking and eating that exceptionally sweet blue crab meat.”

It’s a Thursday morning in Corolla, and on the beach, the summer sun is bearing down hard. But three 9-year-olds haven’t noticed. They make a beeline to the water — holding on tight to a bright red lifeguard buoy — and splash into the surf, cooling their legs before spinning around and dashing breathlessly back to their teammates, who grab the buoy and follow suit.

“Kids love this relay,” explains Matt Hewes, director of the Corolla Life Saving Association, who organizes a free, weekly mini-camp for kids between the ages of 6 and 12. Local ocean-rescue lifeguards teach campers water safety skills through interactive activities like running obstacles and building their own rip current. 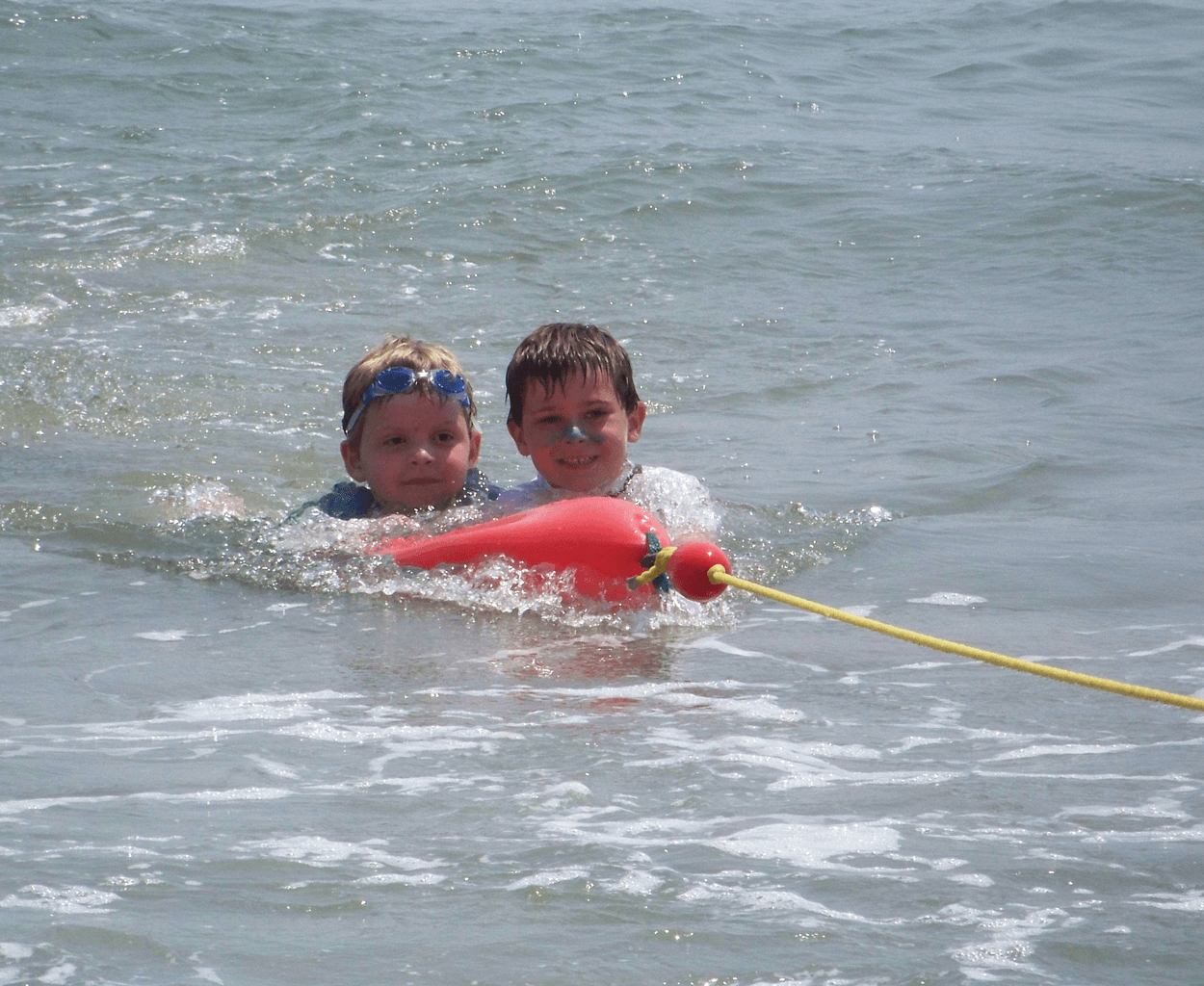 Hewes has been a Corolla lifeguard since the early 1990s, and he knows that visitors usually have the wrong idea when they think about the ocean’s dangers. “Most people think they have to worry about sharks, and that’s never true. We don’t have shark sightings,” he says. Instead, the real danger is rip currents.

“Here, we have a sandbar that runs parallel to the shoreline, like an underwater hill,” he explains. “If you walk out into the ocean, it gets deeper and then shallow again.” That shallow part is the sandbar, and it’s where the waves break.”

Hewes explains to the kids that water builds up in the trophic area between the surf and the sandbar, and that it has to get out to sea. “That’s what a rip current is,” he says. Lifeguards help participants make models in the sand to understand how to spot a rip current and what to do if they get into trouble. “If you can educate kids early, they will go through life with the knowledge of how to avoid trouble — and how to help others,” Hewes says. “I think that’s a truly worthwhile activity.” 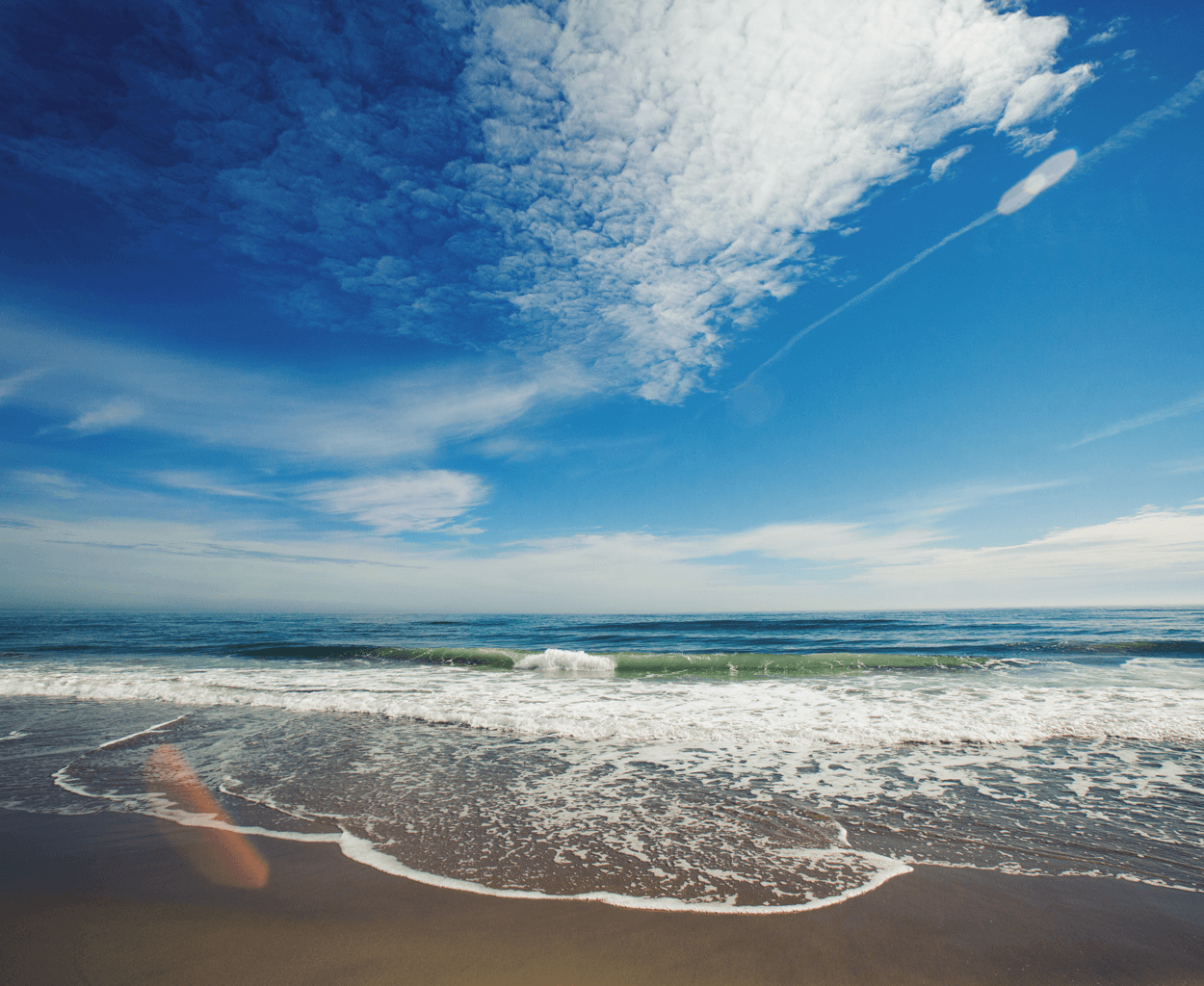 During a summer course on ocean rescue, children learn about rip currents and what can make them dangerous. photograph by Currituck County Department of Travel and Tourism