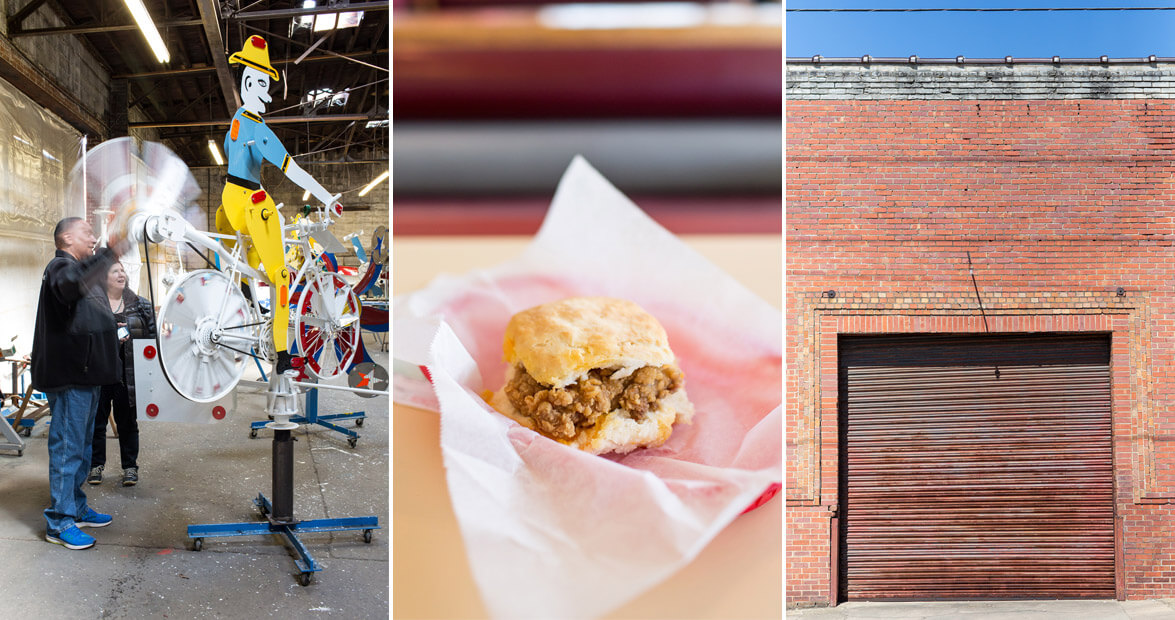 For a surefire good time in Wilson, watch paint dry. We mean that literally and earnestly.

At the Whirligig Conservation Headquarters, the activity is a multi-day affair, a spectator sport. Pop in for a tour and you’ll find a team of conservators restoring and preserving the folk artwork of the late Vollis Simpson. Simpson made whirligigs — massive, spinning contraptions that are quirky cousins to the windmill — from scrap metal on his farm in nearby Lucama. The man was the talk of the town well before the rest of the world caught wind of him, and now the city plans to honor his work at the Vollis Simpson Whirligig Park, which opened in November 2017. 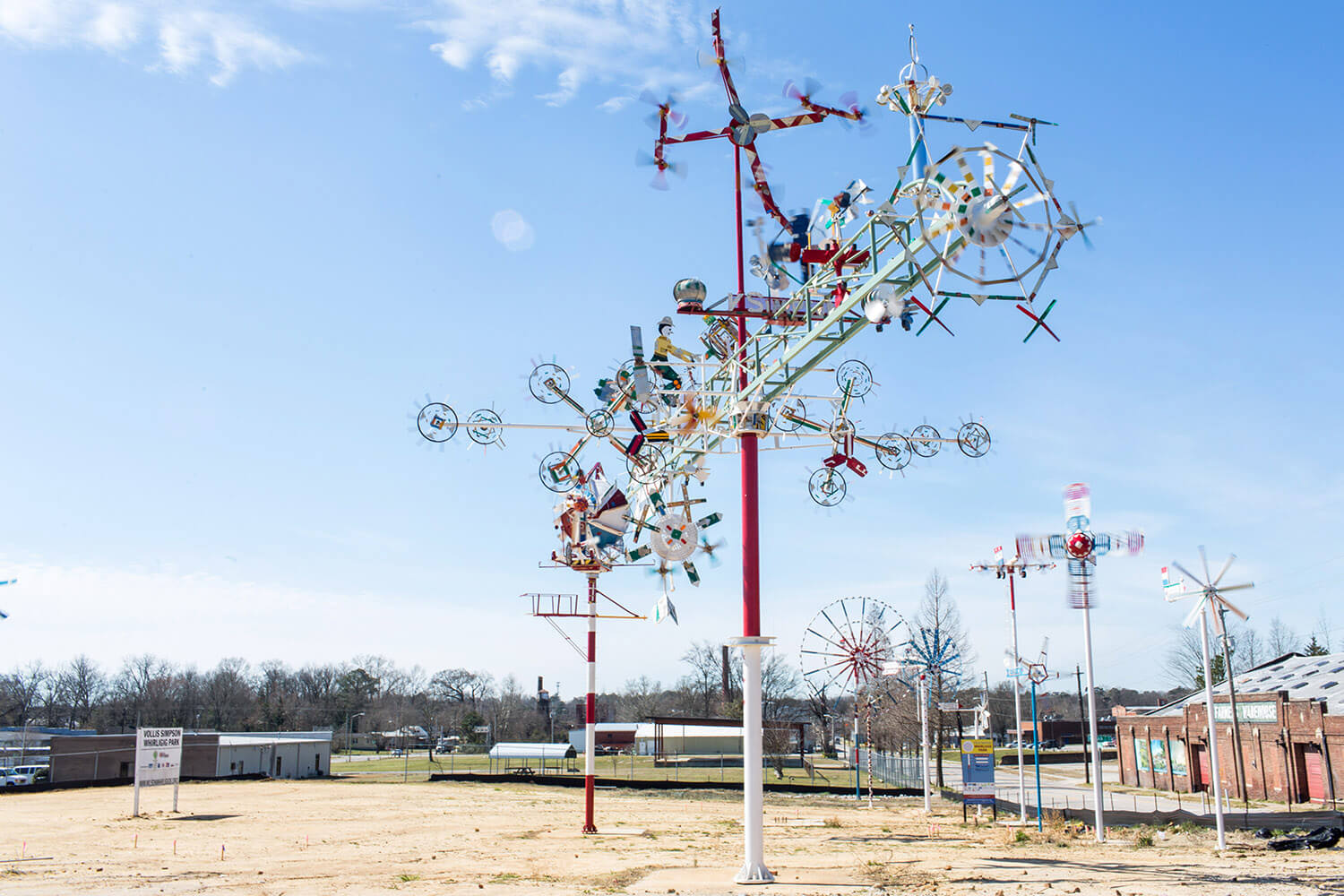 Today, many of Simpson’s pieces are in a downtown warehouse, where they’re stripped of their rust before being coated with industrial-grade paint, the kind that is used on airplanes and buses. The stuff dries in eight hours, but it takes three days to completely cure before receiving a topcoat. Paint takes patience. Thankfully, conservator Joe Justice has got a lot of it.

“I’m 63, and I remember getting in a hurry one time,” Justice says, pausing for the punch line. “It didn’t work out.” 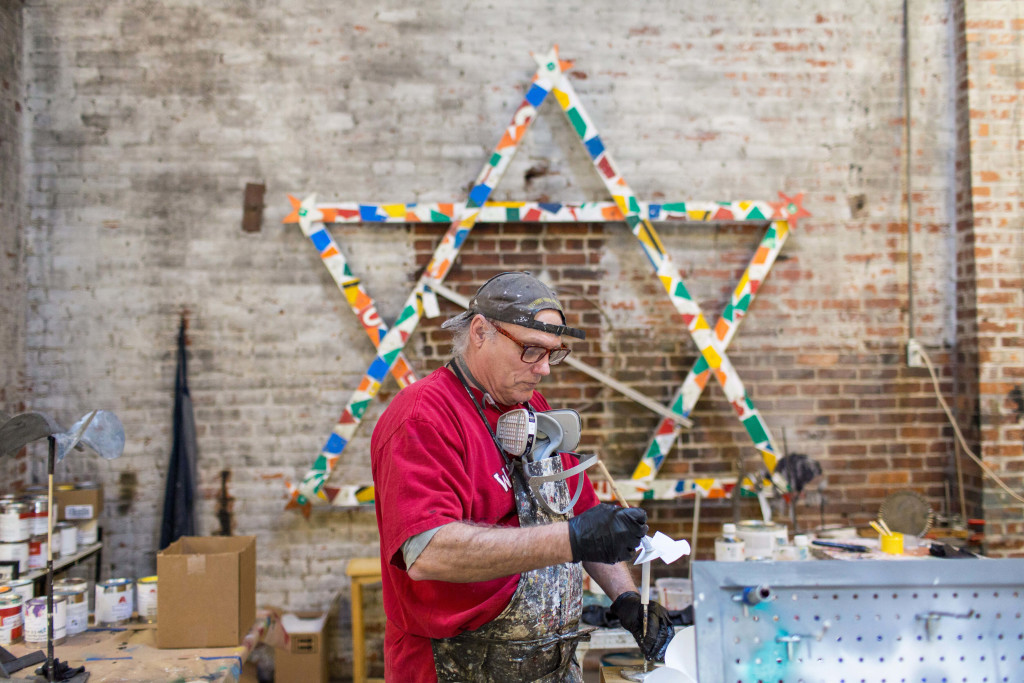 “This will be my legacy,” Justice says. “I’m just tickled to death to be a part of it.”

Justice enjoys taking his time with things. A lot of people in this city do. You can hear it in the way everybody talks. All friendly conversations start with the same, long preambles — the now-let-me-tell-you-what’s and the you-know-something’s — which invariably end with a story about somebody’s cousin. Haste has never been a tenet of The Wilsonian Way. As an outsider, you’ll know it when you hear locals pronounce the city’s name. Everybody from around here knows to draw out its pronunciation by saying WILT-son; there’s even a T-shirt that pays homage to the ever-interrupting consonant. You can ask why that is, but the answer you’ll get is a surprisingly short one: I don’t know. It’s just one of the city’s distinct truisms. 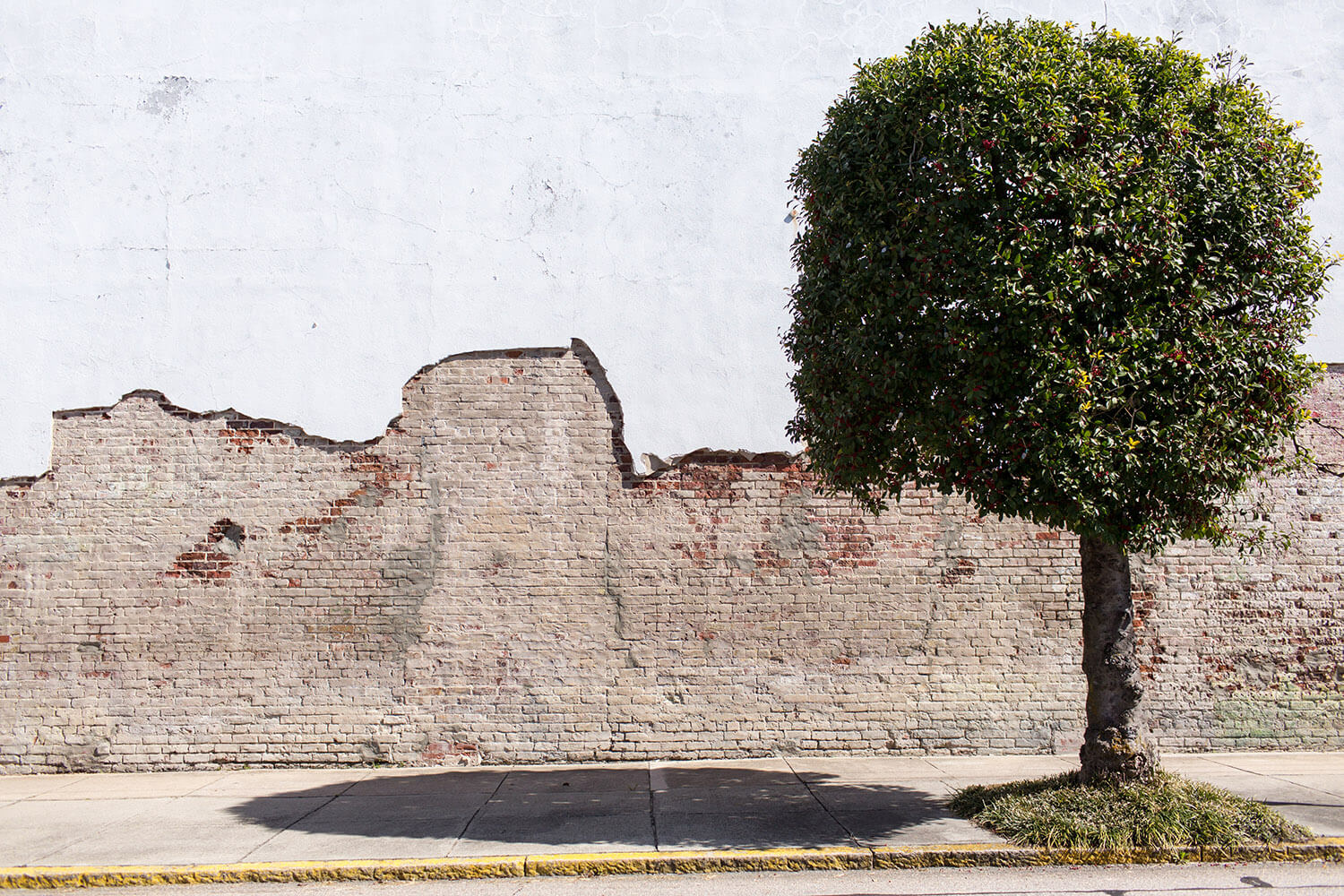 All sorts of trees line the streets of downtown Wilson. But here’s a secret: If you head to the residential part of town, you might spot a handful of genuine California coastal redwood trees.

It makes sense that people like to take their time in a place where tobacco once reigned. The cash crop takes its sweet time, too. Time to be harvested. Time to be cured. In the early 20th century, Wilson had become home to the largest bright leaf tobacco market in the world. The industry has withered over the years, but the city’s time-honored traditions of patience and congeniality haven’t.

A Wilson native, Linda Brewer knows this to be true.

“I’ve been here long enough that I can tell you what it used to be, what it has been, and what it is,” she says of the city.

Even though Wilson has grown up around her, her tiny Goldsboro Street eatery that she opened with her mother 25 years ago, Flo’s Kitchen, has remained a fixture. The restaurant’s legendary cathead biscuits are still larger than your fist, buttery as all get-out, and ooze gooey hoop cheese. 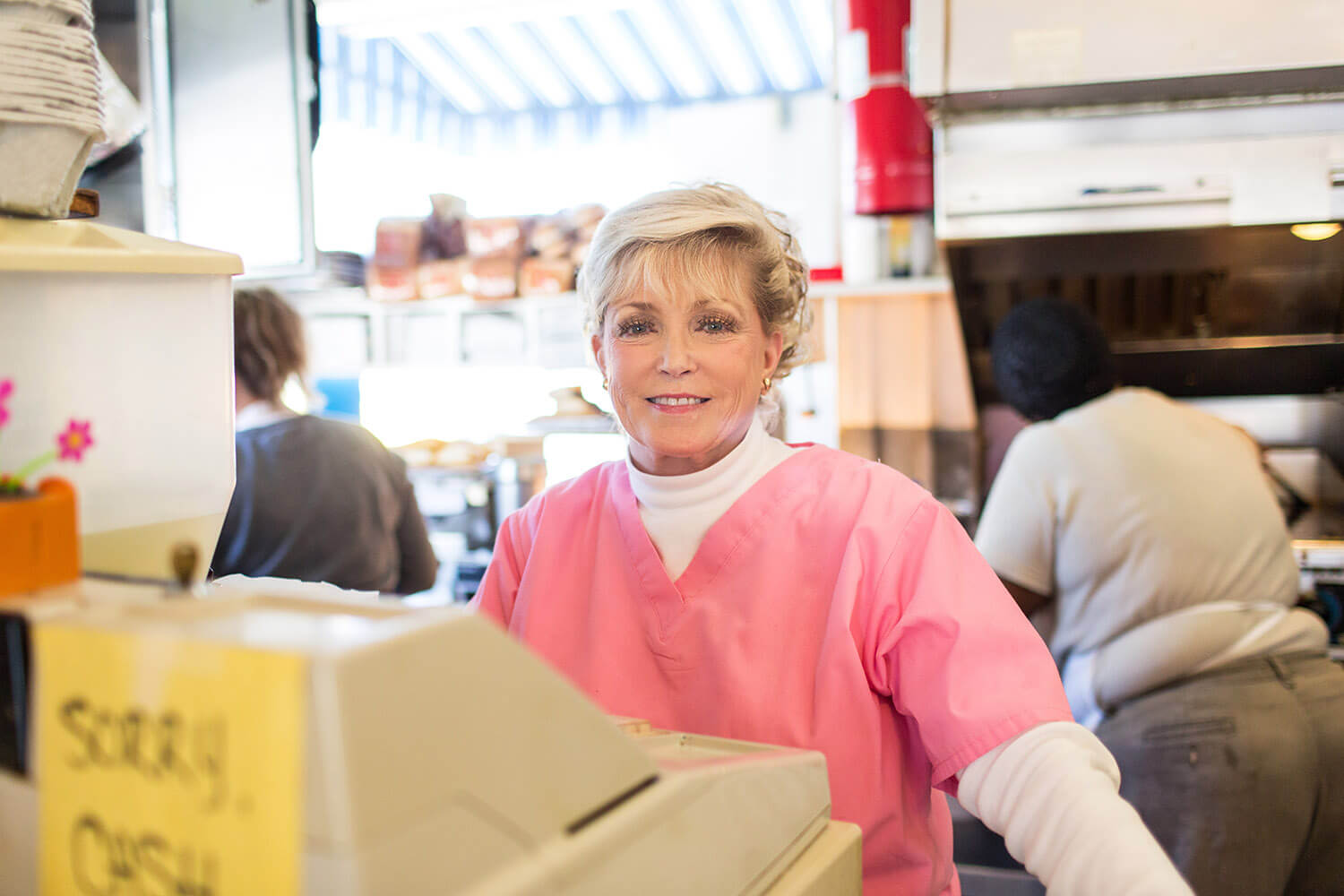 In the 25 years Flo’s has been in business, Brewer has never paid a cent for advertising. Warm, flaky biscuits just seem to sell themselves.

Flo’s serves other diner-variety fare, but biscuits have always been the lifeblood here. They require a certain degree of meticulousness that Bisquick knows nothing about.

“Every biscuit is made special,” Brewer says. “Not with a machine, not with a cookie cutter, but with your bare hands.”

One will set you back two bucks, but Brewer’s syrupy salutations are free, whether you’re coming or going.

“Bye, pudding pie. See you tomorrow, baby,” Brewer says to a regular walking out the door. Longtime customer or not, she treats everybody that way.

“People are wonderful,” she muses. “If you just let them be, they’re wonderful. I can have some of the illest people walk in, and when they leave, I got them laughing if I can.”

Some folks just take a little longer to be polished.

Before there was Interstate 95, U.S. Route 301 was the area’s biggest thoroughfare, running through North Carolina’s Coastal Plain and connecting many southeastern states. It made Wilson a popular pit stop. More specifically, it made Parker’s Barbecue, which opened in August 1946, a popular pit stop.

Co-owner Eric Lippard says customers from years past will bring their children and grandchildren back to see what’s changed. 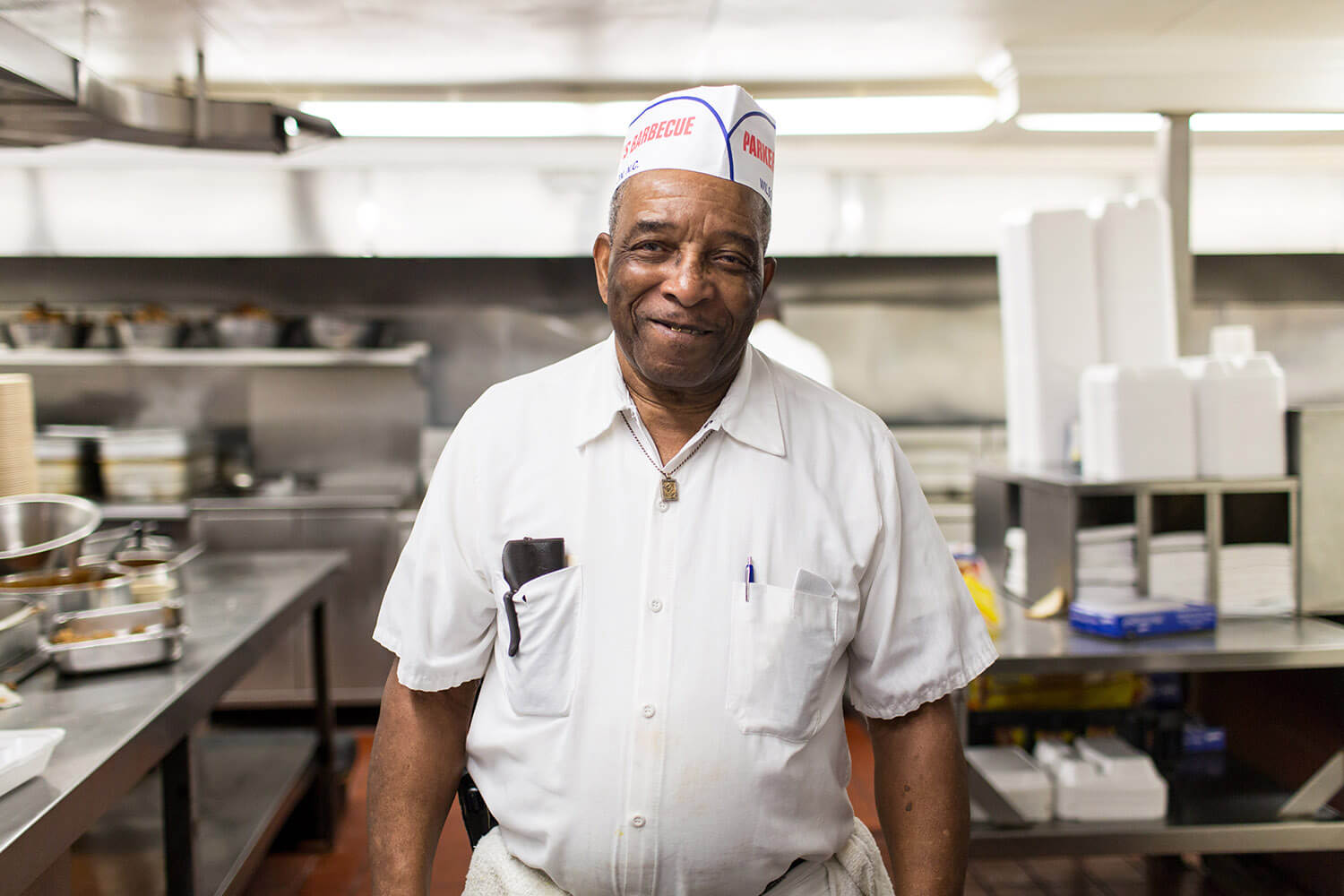 Here’s a man who can remember it all: Johnny “June” Brunson. He’s worked at Parker’s for 65 years, six months, and three days (as of March 3).

Though Interstate 95 has replaced U.S. 301 as a faster way to get to where you’re going, people still come in droves.

“We serve about 25,000 customers a week,” Lippard says. “They come from all over the world, literally. You can go out there on Saturday, and you’ll see license plates from California, Texas, Canada.”

Presumably, they come for the eastern-style ’cue and, oh good gravy, the succulent fried chicken. 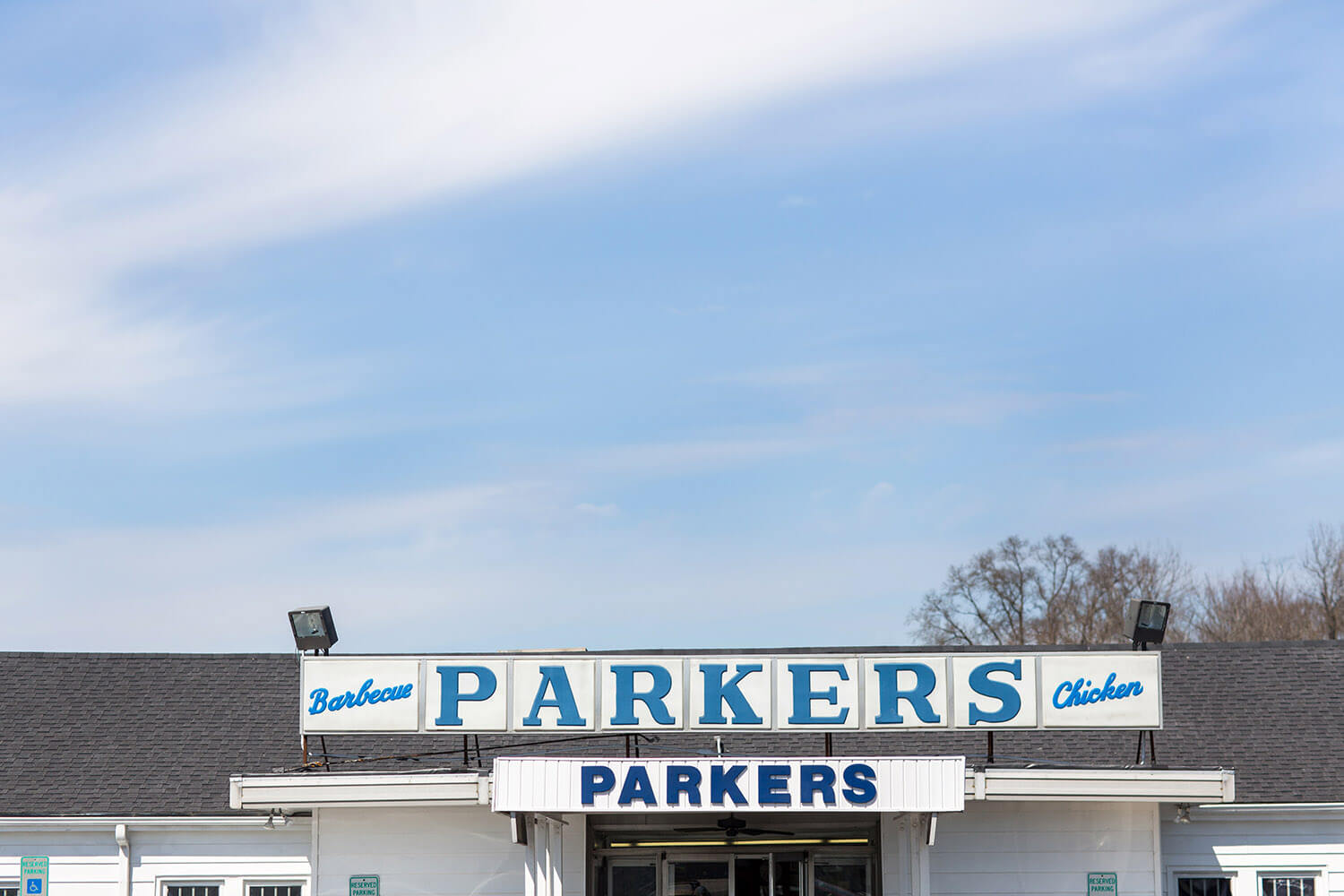 Parker’s Barbecue is a welcome sight to those driving along U.S. Route 301. Once, there was an inn and even an oyster house, but it’s the ‘cue at Parker’s that has endured.

Whether it be biscuits, barbecue, or beef (The Beefmastor Inn’s slabs of rib eye are unrivaled in size and flavor), Wilson cultivates an appreciation for food that’s slow to be prepared and savored. On the edge of town at SoCo Farm and Food, what’s for dinner is also slow to grow. The restaurant, housed within an 80-year-old tobacco barn, harvests its own produce and honey. Its farm is within steps of your table.

About the only thing locals don’t make time for here is traffic.

“A friend and I were joking about the traffic, and he said, ‘Raleigh has a rush hour; Wilson has a rush minute,’” says Bowie Gray, who owns the 108-year-old Wilson Hardware Company.

The landscape of downtown is in for a change these next few years. Just as the whirligig park is being built, ground breaks in April on a project that will convert old warehouses into restaurants, a farmers market, and even a microbrewery. The hope is that it’ll enliven downtown.

Perhaps that “rush minute” will now become two. Even still, good things — good places — take time. Wilson sure hopes you’ll give it some of your own.