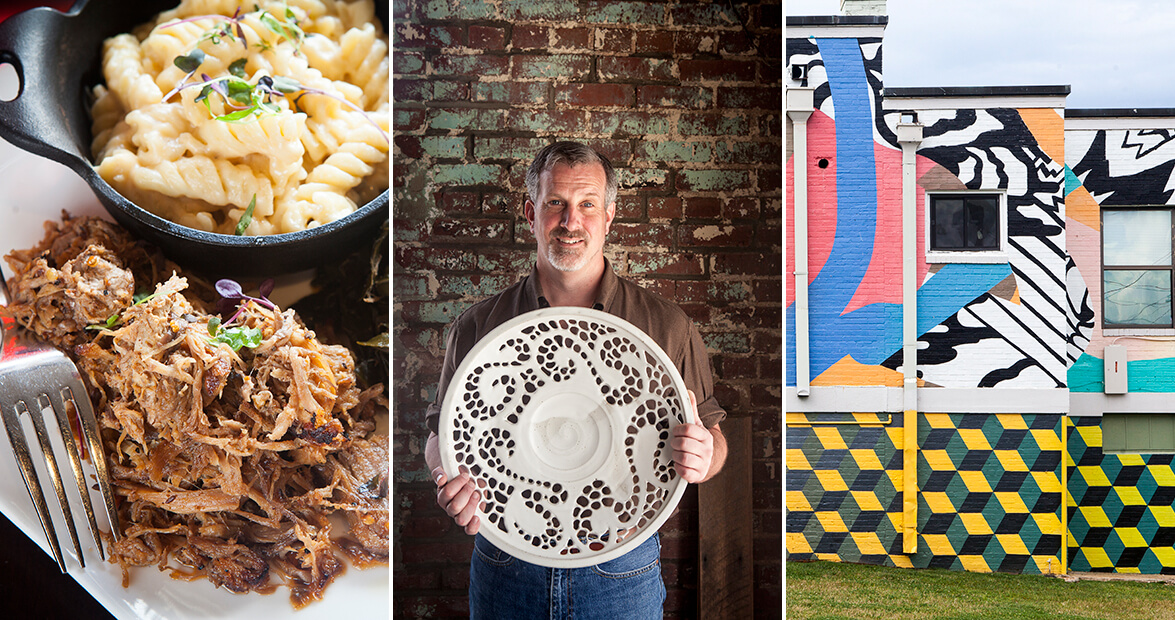 Consider the carrot. On this late spring afternoon, it’s top of mind at Fonta Flora, a brewery in downtown Morganton. A 175-pound order of the humble orange vegetable you reluctantly ate as a kid just came in from a local farm. But the carrots aren’t here for long before making a brief stopover at Wisteria Southern Gastropub, a farm-to-table restaurant just down the road, to be shredded. Eventually, they’ll wind up in your glass as the focal point of the brewery’s Alpha vs. Beta Carotene IPA.

The seasonal beers made at Fonta Flora, like the carrot IPA, get at the root of what Morganton is and what it’s becoming. Brewer Todd Boera thinks about it constantly, beer and the part it plays in transforming the town.

“What does it really mean to make a local beer?” he muses aloud. “Just because it’s in a place doesn’t mean it’s local.”

To capture a city’s character and flavor, Boera knows local ingredients — and the ground they’re grown in — are as good a place to start as any.

Much of our Southern soul can be traced to the earth that’s caked on the soles of our feet. It’s the reason why we’re called The Tar Heel State, and it’s why the love that locals have for this foothills city is grounded in something fierce. When you’ve watched Morganton grow from a bygone manufacturing city to a burgeoning artistic and cultural destination, as locals have, it’s easy to feel a sense of pride. 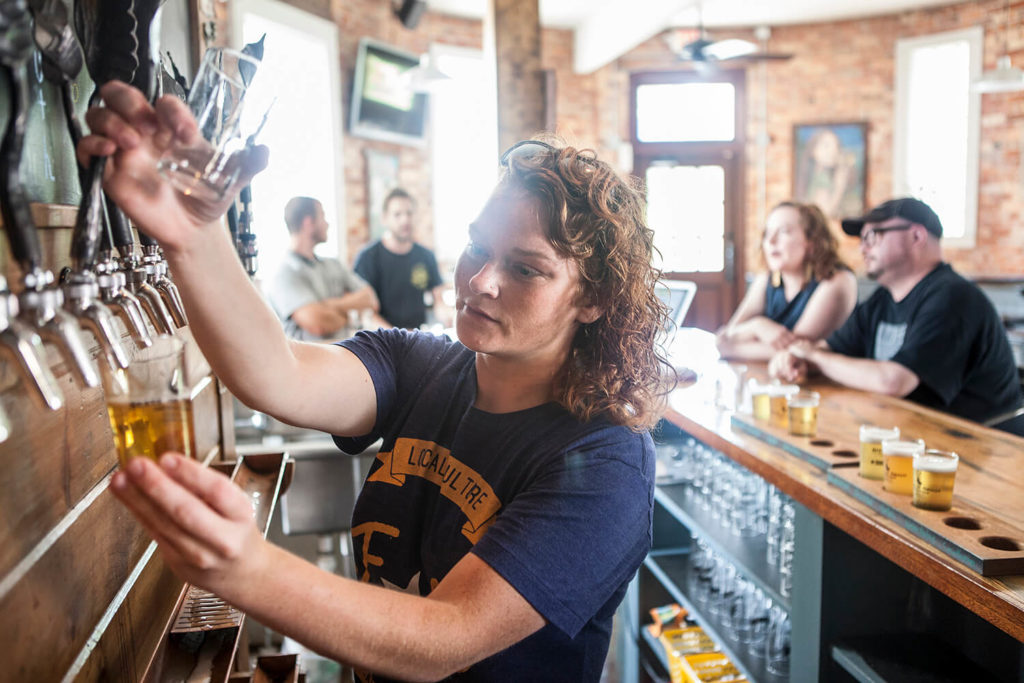 Known for its saisons and sour wild ales, Fonta Flora brews beers based on seasonality of ingredients.

Boera admits that he wasn’t exactly the biggest fan of Morganton when he relocated here six years ago. There was the city’s first brewery, Catawba Brewing Company, and the mainstay Grind Café, but Morganton could’ve used some more energy.

“There were a few other straggler restaurants, but nothing with a vibrant culture tied to it,” Boera recalls.

But with time, something interesting started happening. New businesses not only moved in but they also began to stay. Wisteria was one. Root & Vine was another.

Before opening Root & Vine in 2011, Aimee Perez and her husband, Brian Miller, were on a day trip to Morganton and ate lunch on what would later become the patio of their own restaurant. Back then, that same patio on the corner of Union and King streets belonged to a different, now defunct restaurant.

At the time, Perez and Miller were working at a bakery in Hickory and realized how many customers were traveling from Morganton to eat. The demand for wholesome food was certainly there. All it would take was for one — or two — trusting restaurateurs to take a chance on the town. When the restaurant space became available just months later, Perez and Miller did.

Now their guests can enjoy artful entrées like hearty pork shoulder with Cheerwine barbecue sauce or wood-grilled mountain trout. The hallmark of each dish is its simplicity. Nothing is over-sauced or over-seasoned.

On a warm day, even during the workweek, it’s not uncommon to see Root & Vine’s patio full at lunchtime.

Just as businesses began to establish roots in Morganton, people began to stop and stay awhile, too. Comparing what Morganton was like five years ago to what it is now is an interesting exercise for Perez.

“Something about Morganton still has a charm about it, but it definitely didn’t have that bustle feel that it has now,” she says. 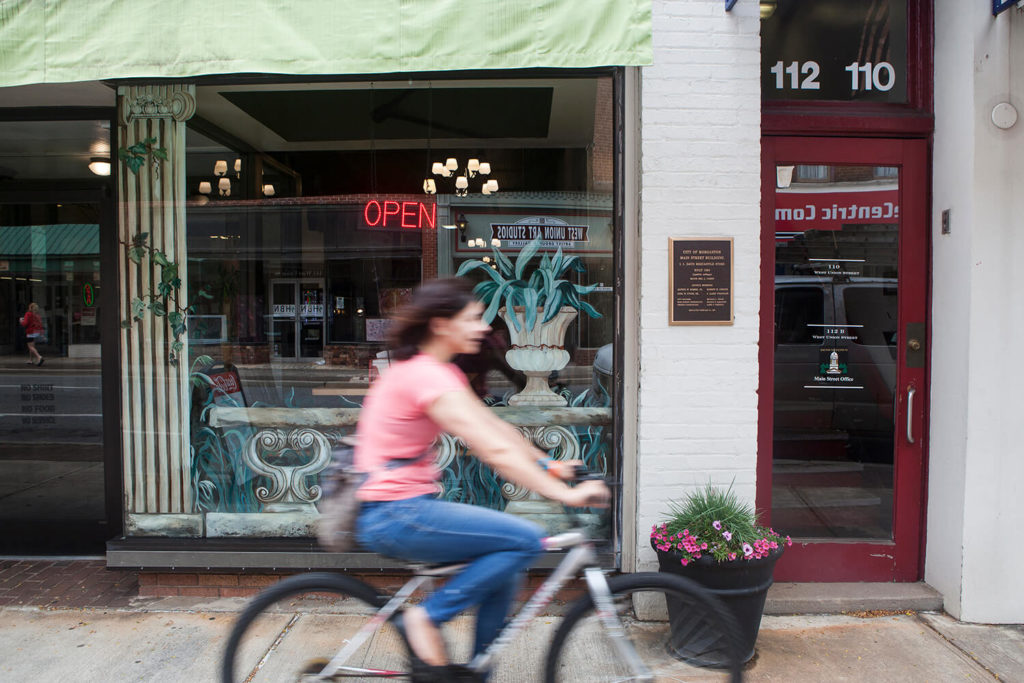 On westbound drives along Interstate 40, the majestic peaks of the Blue Ridge Mountains off in the distance command attention. Eager to get to where we’re going, we forget about what lies at our very feet. Foothills towns brimming with opportunity dot the highway about every 22 or 23 miles or so, which is how far you could go on stagecoach before you had to change horses back in the day.

Since the invention of faster ways to get somewhere, we don’t appreciate the charms of these places like we should. We take for granted the woodworker in Hickory, who painstakingly sands every inch of your new kitchen table. Farther down the road in Drexel, there’s The Barber Shop, where you can enjoy the bluegrass pickin’ sessions that take over the back room on Saturday afternoons. And there are the artists in Morganton who are giving rise to a collaborative creative community formerly unseen by the city.

Potter Hamilton Williams opened his eponymous gallery and studio in 2013 after relocating from nearby Valdese.

A member of the Southern Highland Craft Guild, Williams was looking for a bigger workspace to create his pieces.

“This is probably twice the production area I had at my old studio, and the roof doesn’t leak, which is a bonus — especially since I work with clay,” he says with a laugh.

Not long after opening, he realized that his move meant so much more. Morganton was on the upswing. Many western North Carolina artists had begun venturing beyond the borders of Asheville’s River Arts District and building communities of their own.

“The studio was the main focus, and I was going to rent out the other space, but the whole idea kind of snowballed, and before I knew it, we were opening a gallery,” Williams says.

His gallery features not only his own work, but also the crafts of fellow potters, jewelers, and weavers.

“That took off, and we haven’t looked back,” he says.

When you consider what’s on the docket for Morganton, there isn’t a whole lot of time for looking back. The North Carolina School of Science and Mathematics has promised to break ground on a Morganton campus in the coming years, which will bring new jobs to the area. Meanwhile, more businesses continue to bring life back to downtown.

Next year, Fonta Flora will open a farmhouse brewery 15 miles outside of the city limits, where it will grow its own ingredients. It’s fitting, considering the site is a stone’s throw from the brewery’s namesake: the Fonta Flora sharecropping community that once existed on the banks of the Linville River. It was flooded in the 1900s, when Lake James was created, and Boera hopes the brewery will honor the heritage that was established there so many years ago.

One town’s legacy, built from the ground up.