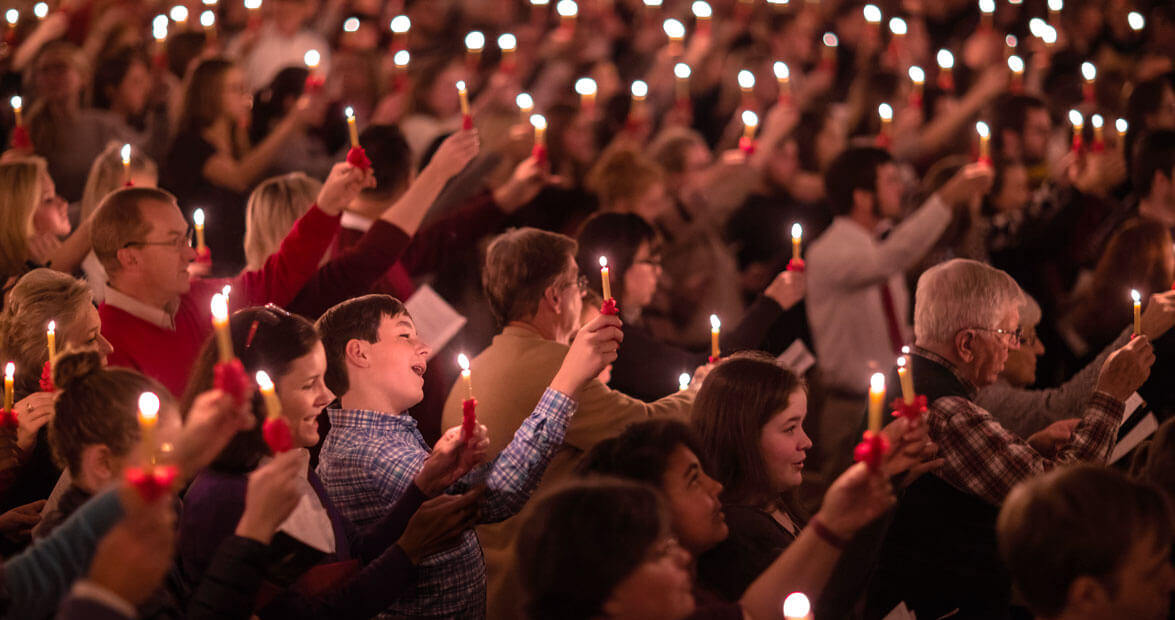 Feature Image: At the end of the lovefeast service at Wake Forest University, Wait Chapel transforms into a sea of light as worshipers lift their voices and their candles. To find lovefeast services across the state, click here.

The very first lovefeast — liebesmahl to the German-speaking Moravians who meticulously recorded it — must have felt like a beacon. The year was 1727, and the Unity of Brethren were celebrating the spiritual renewal of their ancient church in Saxony, where they’d found refuge after a century of religious persecution in their native Moravia and Bohemia. Soon, they would settle in Pennsylvania, then in North Carolina, and they’d carry lovefeast with them as they spread the gospel around the globe. Even then, the concept was tried and true, borrowed from ancient Christians who broke bread in celebration of agape, or unconditional love.

In 1965, not far from where the Moravians settled in present-day Forsyth County, a group of Wake Forest University students held their own lovefeast. Fewer than 200 people attended, but that first service ignited a spark: Now, for thousands of attendees of all denominations, the holidays don’t really start until they sip coffee and sing hymns at Wait Chapel. Lovefeast may not be exclusive to Winston-Salem, but the community has embraced it with open hearts. 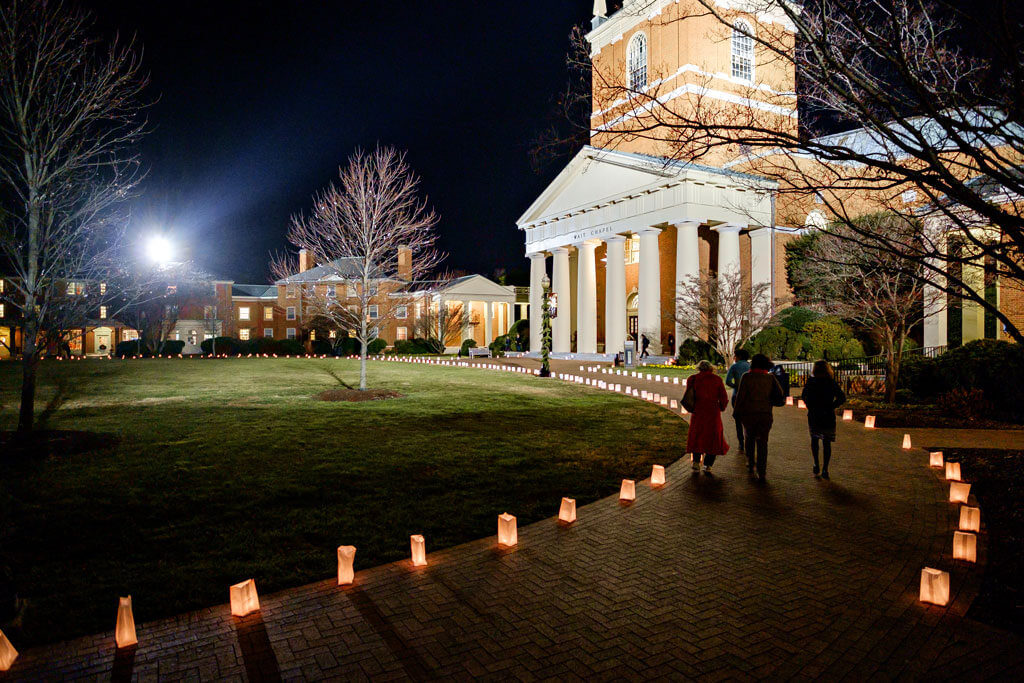 For thousands of people of all denominations, the holidays don’t really start until they sip coffee and sing hymns at Wait Chapel. photograph by Ken Bennett/WFU

Though not an official sacrament, the lovefeast service offers opportunities throughout the year for fellowship and thanksgiving at each of the 13 churches of the Salem Congregation and beyond, including the only African-American Moravian church in the country. St. Philips traces its roots to 1822, when Salem’s enslaved community began worshiping together, first in a log church, then in a brick one.

In 1952, St. Philips moved to a sanctuary closer to where most of its members lived, and the original church — now part of the Old Salem Museums & Gardens — stood vacant for a time. In 2009, the congregation marked the anniversary of their ancestral church’s consecration the Moravian way: with a powerful lovefeast.

Last year, the Moravian Brass Band played Christmas tunes on the lawn before the service. Inside, dieners — German for “servers” — passed out mugs of Russian tea. And in the pews — the same ones where, in 1865, congregants listened as a Union cavalry chaplain announced their freedom — worshipers felt the weight of history. 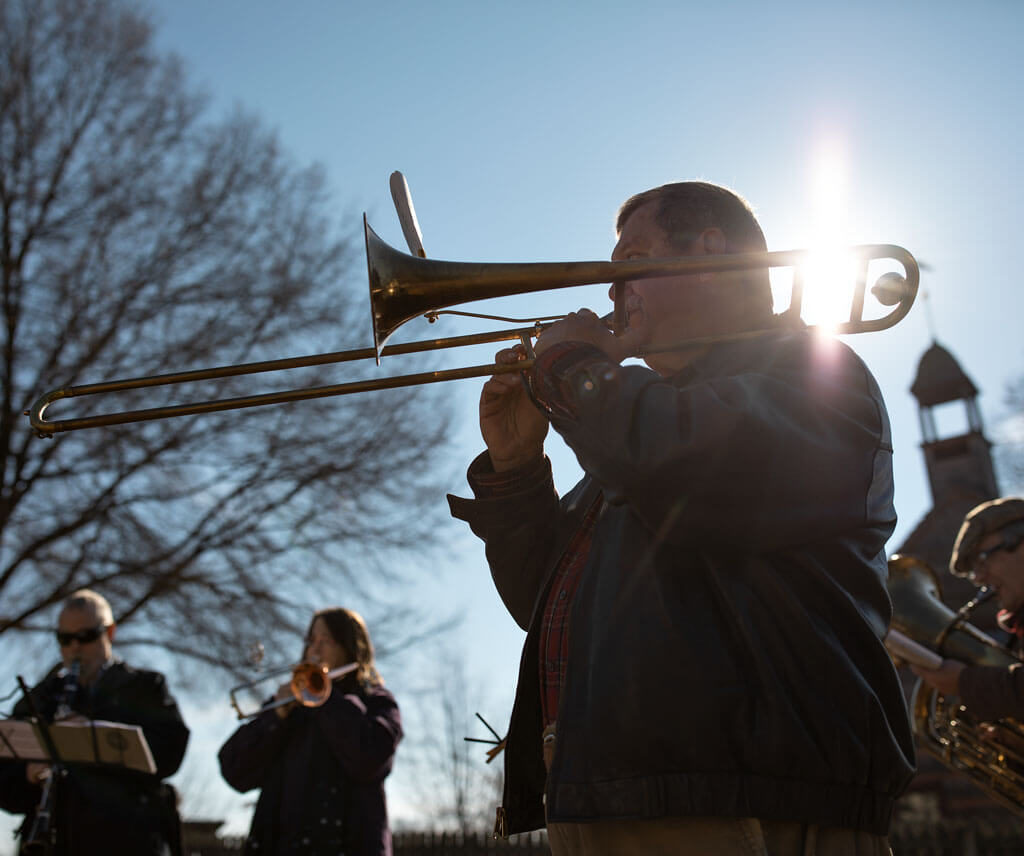 After so many generations of practice, the familiar beats of the lovefeast service are a comfort: There are prayers and Scriptural readings. Hot beverages and sweet buns. Sometimes there’s a homily. And there is always music.

Song is deeply woven into Moravian history and culture — it was Moravians, for example, who first brought the trombone to the U.S., where brass instruments continue to play a prominent role in worship. A hallmark of the Christmas lovefeast at St. Philips is the special music that’s chosen to accompany the tea and buns. Last year, the Salem Singing Sisters wore their 18th-century best, down to the ribbons that once denoted a woman’s marital status. 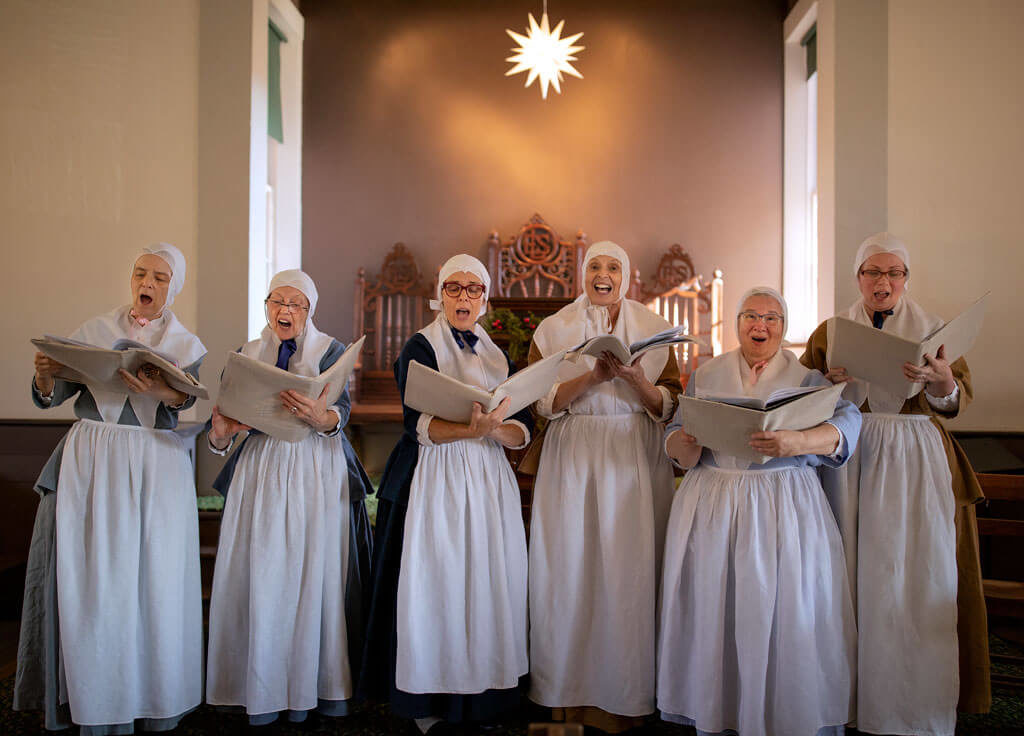 The journey to North Carolina from Pennsylvania took six weeks on foot, and the first 15 Moravian brethren who’d come to settle this wild new land were surely weary when they arrived in November of 1753. Yet they found strength of spirit in a tradition they’d brought with them down the Great Wagon Road: In an abandoned cabin in the Piedmont wilderness, they prepared a lovefeast to thank God for guiding them on their way. The village that flourished around that cabin was called Bethabara — Hebrew for “house of passage” — and for a time, it served as a center of Moravian life. But it was always meant to be temporary.

As the nearby town of Salem grew, Bethabara fell into decline, and by 1820, most of the original buildings there were gone. Today, Historic Bethabara Park offers a look at the early days of the settlement, complete with tour guides like Stephen Harris (pictured), whose knowledge and 18th-century attire help bring the past to life. 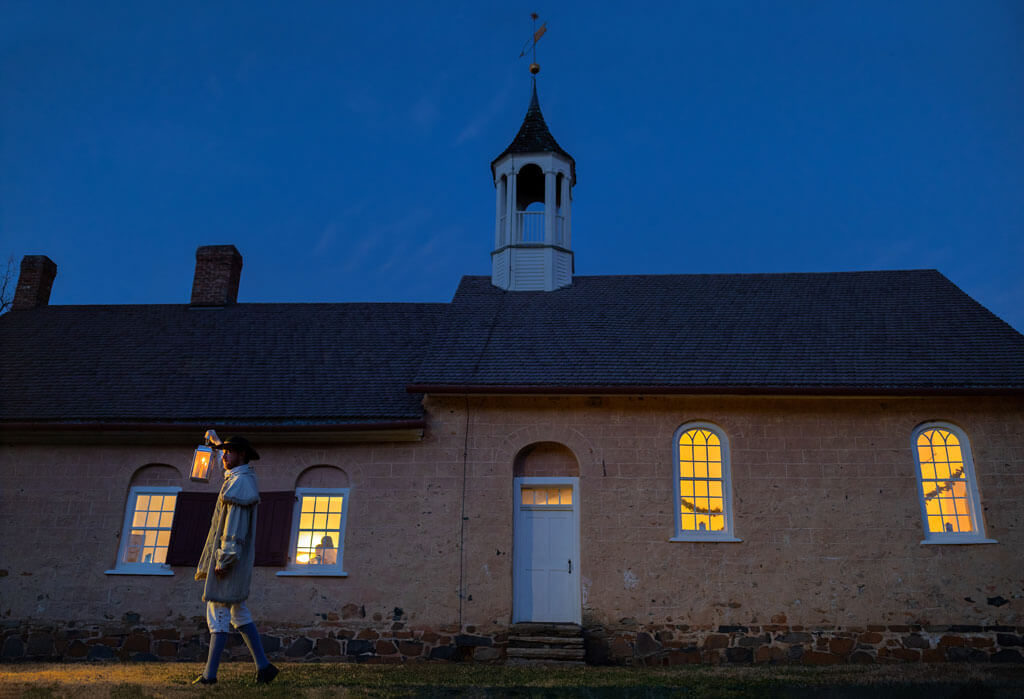 Many of the buildings at Historic Bethabara Park, including the 1788 Gemeinhaus — which once served as a church, meetinghouse, school, and minister’s quarters — have stood the test of time. Bethabara Moravian Church, too, traces its history back to the first 15 Moravians who settled here. Most Sundays, the congregation gathers in a newer, larger sanctuary. Except at Christmas.

Once a year, in early December, the church partners with Historic Bethabara Park to hold a lovefeast in the restored Gemeinhaus. Last year, as the Rev. Jeff Jones (left) led the service, darkness gathered outside. But in the Saal, or sanctuary, light poured from the illuminated painting at the lectern, a Moravian star overhead, and a host of beeswax candles. At Christmastime, the Gemeinhaus glows. 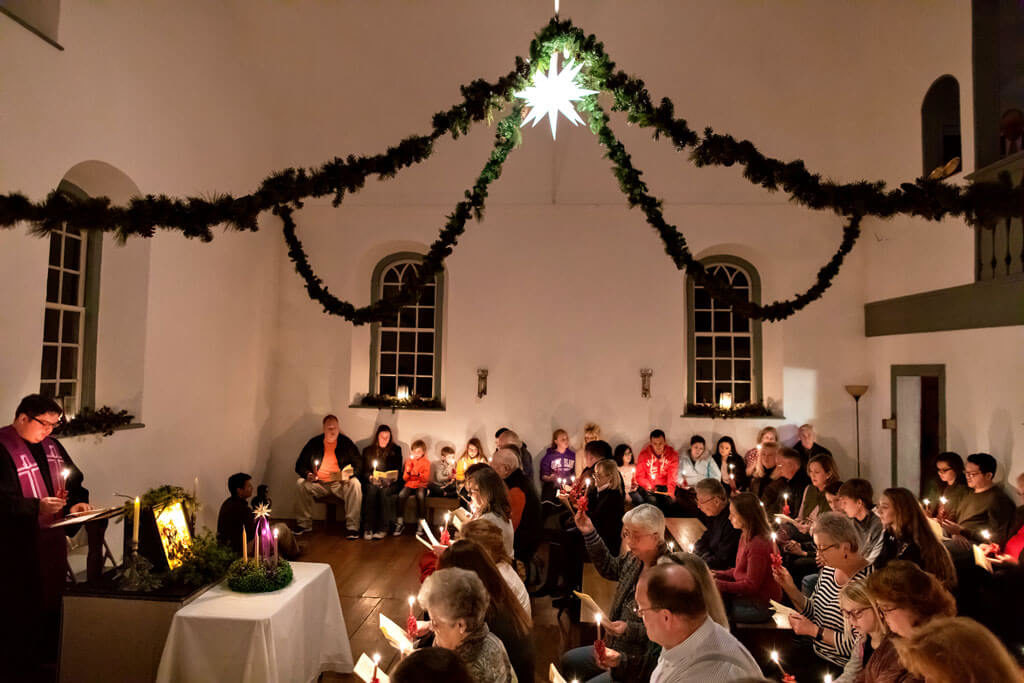 Once a year, Bethabara Moravian Church partners with Historic Bethabara Park to hold a lovefeast in the restored 1788 Gemeinhaus. photograph by Jerry Wolford & Scott Muthersbaugh

Families look forward to Historic Bethabara’s annual Christmas event as an opportunity to see the park — and Moravian history — in a different light. After the lovefeast service in the Gemeinhaus, visitors like the Johnson family (below) admire Bethabara’s Christmas pyramid and putz, or Nativity scene — Moravian traditions that the earliest missionaries brought over from Germany. 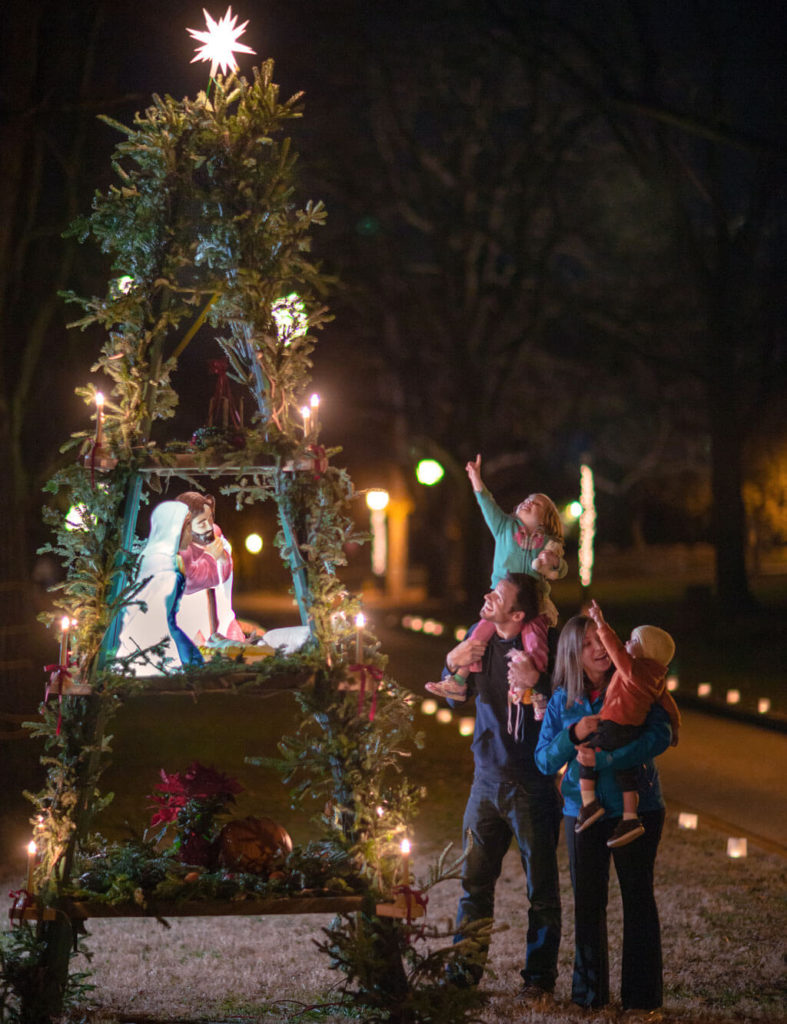 They can take in a “Silent Night”-themed puppet show. They can wander the historic village, where demonstrations of colonial quilting, cooking, and blacksmithing illuminate life in the Piedmont backcountry and the Moravians’ long tradition of craftsmanship. In the early days of Bethabara, when the settlement existed on the western edge of the frontier, such skills were necessary for survival. Today, Joel Cooper shows how a cooper would have built and repaired barrels and casks — and he also creates friendly Christmas reindeer.

Only at Christmastime does lovefeast include candles, often made by local churches using beeswax and beef tallow, and always trimmed with a red paper frill. For students at Salem Academy, lovefeast plays a role in a cherished tradition: At Senior Vespers, a candlelight choral service, the senior class serves coffee and buns in the Moravian tradition. 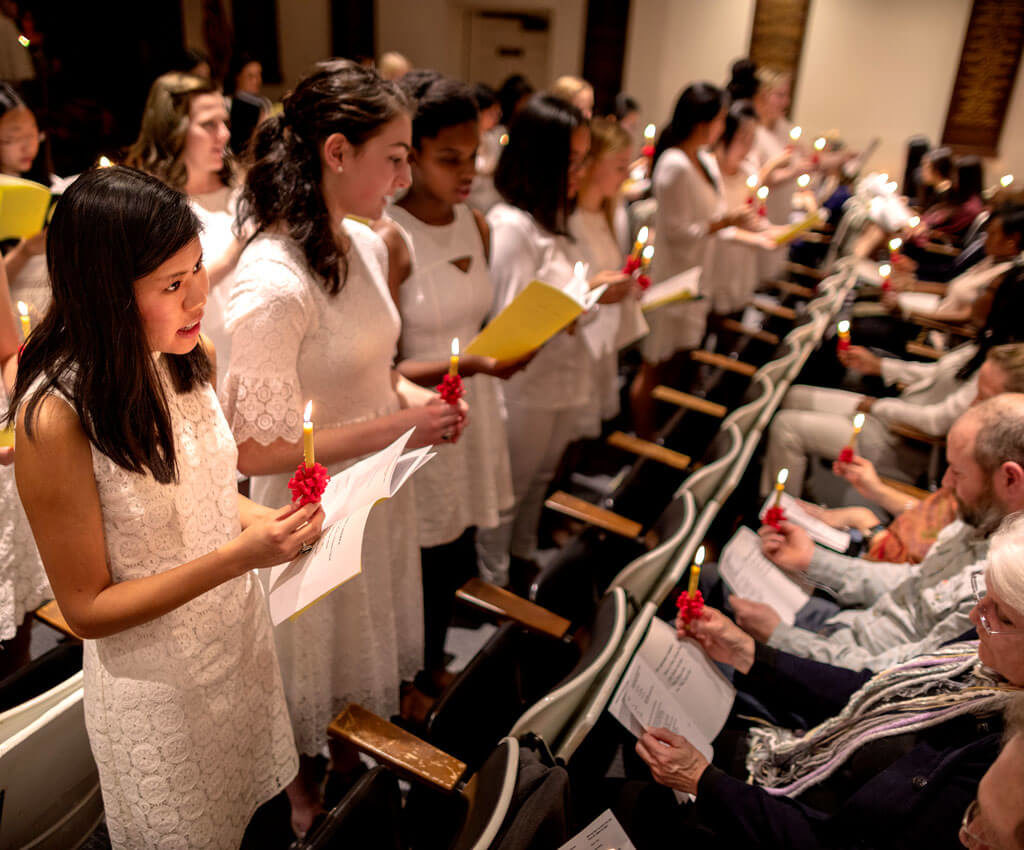 For the senior class at Salem Academy, a candlelight choral service is a cherished tradition. photograph by Jerry Wolford & Scott Muthersbaugh

Moravians founded the school for girls in 1772 — a decade after candles first appeared at a North Carolina lovefeast as a visual aid to teach children that grace is the light of the world. Today, for participants of all ages, the candles continue to impart a sense of wonder. 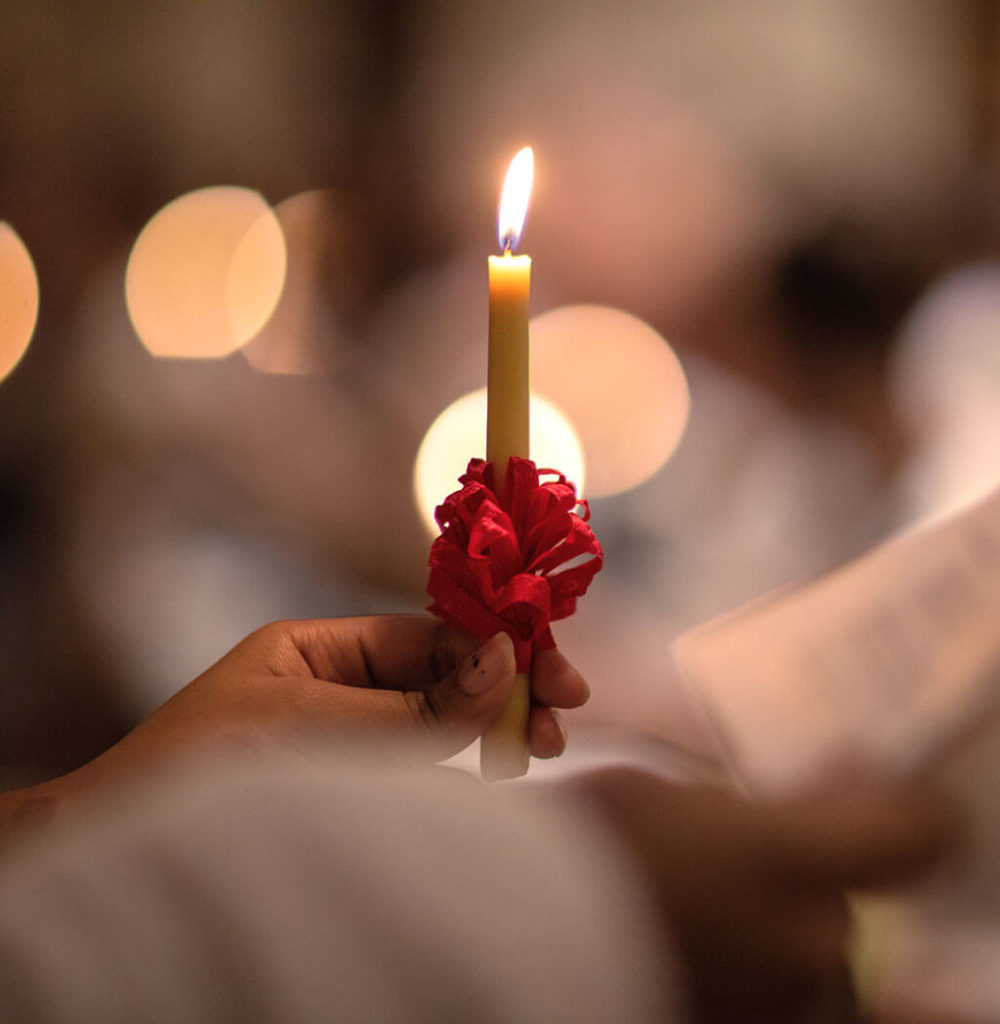 During a lovefeast service, neighbors depend on one another, reflecting the goodwill of the season. Dieners cheerfully serve the congregation; worshipers break bread side by side; candles are lit from one to the next, a common flame traveling down each pew until the entire church is aglow. But it occurred to Ginni Baker several years ago that, whether because they’re homebound or simply too far away, many people are unable to make it to her church, Calvary Moravian, on Christmas Eve. 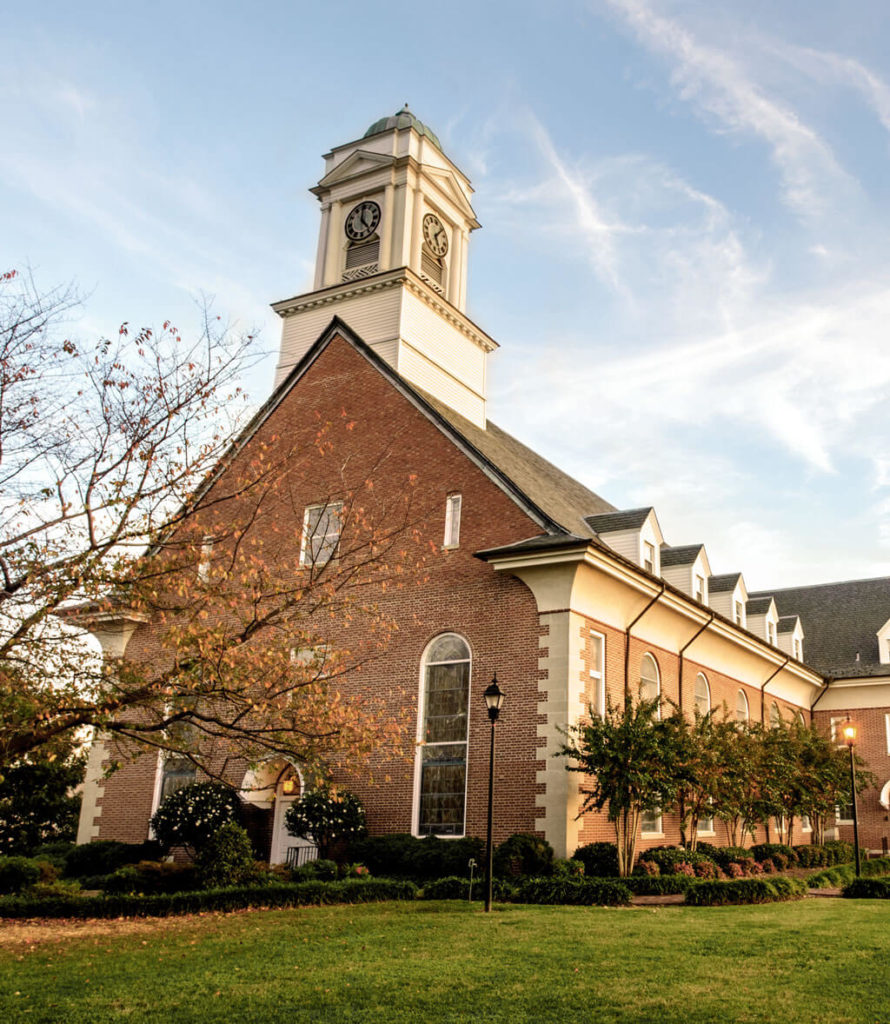 For people unable to make it to church, Calvary Moravian streams its lovefeast services on the Internet. photograph by Jay Sinclair

She had an idea: Calvary streams its services live on the Internet. A few items — a candle, Moravian sugar cookies (they travel better than buns), coffee, and a program — would help faraway friends feel included. “Lovefeast in a Box” became a fund-raiser for her church group, Calvary Sisters Fellowship. The sisters mold the candles, trim them with a red crepe paper frill, and make a day of building the boxes, happy to be giving the gift of togetherness. 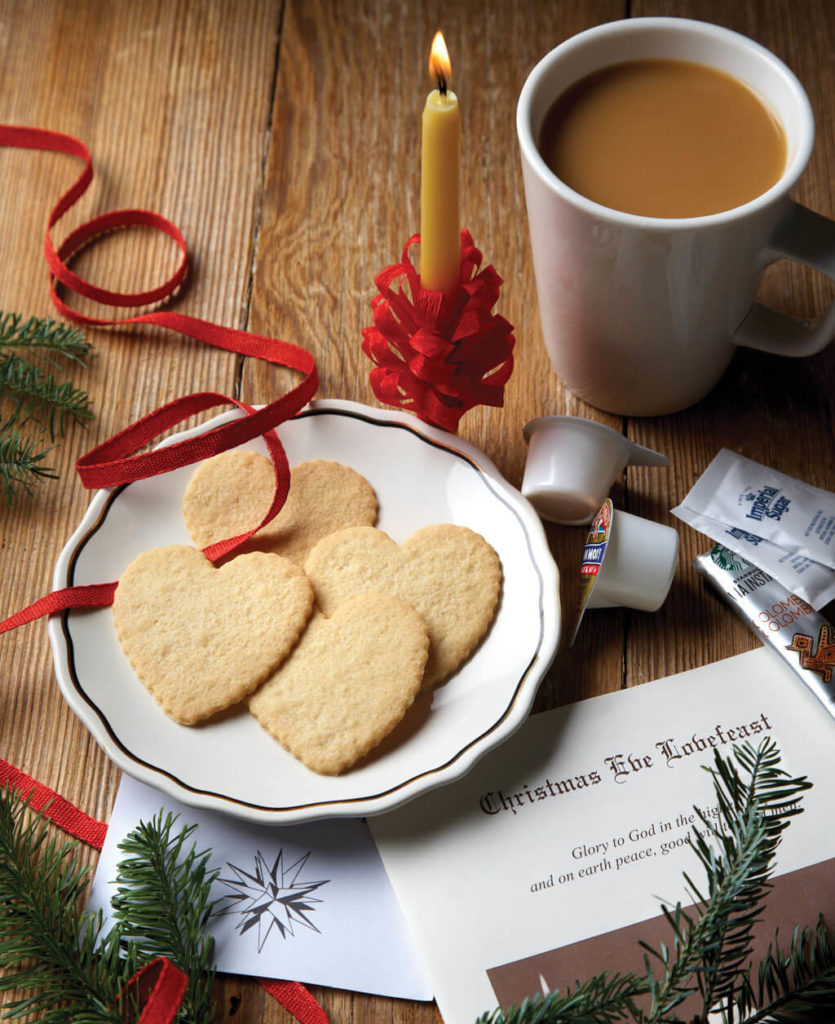