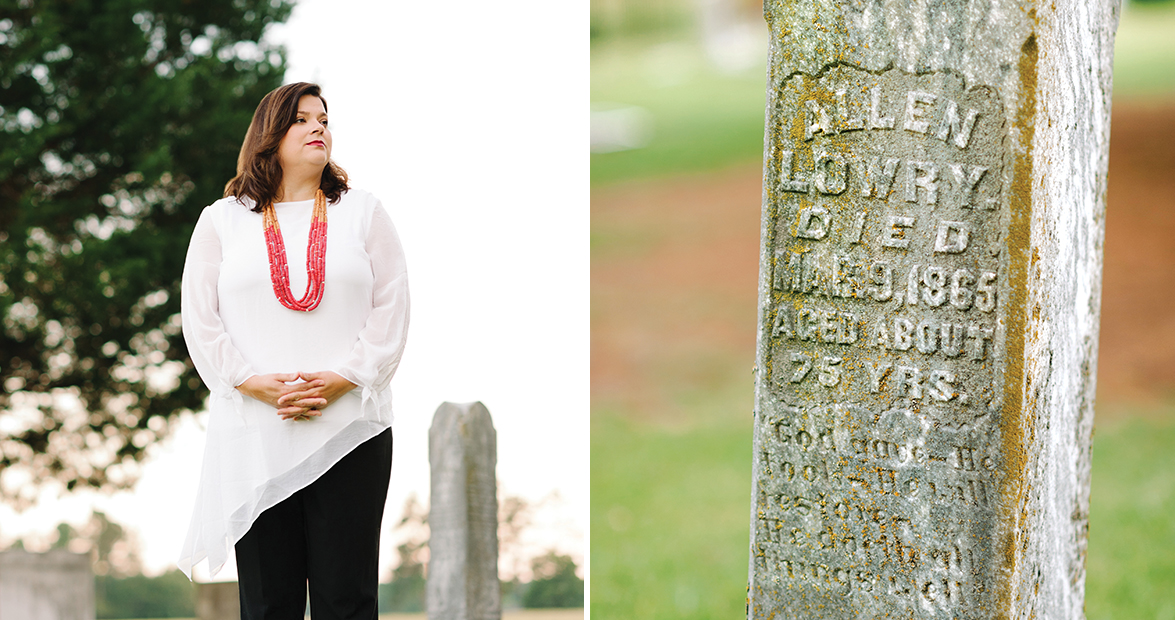 1865: The Lowry War unites the Lumbee. This historic date is included in our 50 Moments that Made NC.

As the sun breaks through the towering cypress trees, Nancy Fields walks to the Lumber River near Pembroke, to the shore where her mother was baptized and where ferries once carried her ancestors across the dark, tannin-stained waters.

She’s standing in a place where she has always felt a spiritual connection to the land and the American Indians who have called it home for thousands of years.

Raised in Charlotte, educated at the Institute of American Indian Arts in Santa Fe, New Mexico, then hired by the National Museum of the American Indian at the Smithsonian and two other museums, she now finds herself where Lumbee Indians so often do: back home.

“Crossing the Robeson County line, it’s just like an energy rolls through you,” says Fields, now the director and curator of the Museum of the Southeast American Indian at the University of North Carolina at Pembroke. “There is an undeniable feeling that you’re part of something greater, part of a rich heritage. When you look at all the people who are part of the fabric of North Carolina, who contributed to make it what it is today, we are one of the first people.”

As the river rushes by, Fields falls silent for a few moments. A chorus of birds trill overhead, and a pair of dragonflies dance below. When she finally speaks, it’s almost a whisper: “This is where time stands still.”

For Fields, the river and the land it nourishes hold the mysteries that shaped her people. After leaving the riverbank, she drives out into the country, between swamps and pine woods, past cornfields and pastures, stopping at a small cemetery. With her is Kenneth Clark, cultural enrichment specialist for the Indian Education Program in the local public schools, who shares her passion for history.

They walk beneath a broad cedar tree — a Burial Tree — a symbol to the Indians of healing and protection. They stop beside a small, worn obelisk inscribed on three sides: Allen Lowry, William Lowry, Mary Lowry. The date of death for the two men is the same: March 9, 1865.

It is a day renowned in Lumbee history. On that date, the Confederate Home Guard charged Allen and his son William with theft and killed them, setting off a guerrilla war that raged for seven years after the Civil War ended.

Henry Berry Lowry brought a sense of security to the community.

A few hundred yards from the cemetery, Allen and Mary Lowry had raised their children in a two-room cabin. Fields and Clark are descendants, but through different sons. They grew up hearing the story of the “Lowry War” and take turns retelling it: “People were starving,” Fields says. “North Carolina law prevented Indians from owning firearms, so they couldn’t hunt for substantial game for food — or protect themselves. The Home Guard was terrorizing local families, raping women, tearing up kitchen gardens, kidnapping men to build the breastwork at Fort Fisher.”

“They targeted the Lowrys because they were harboring Union soldiers,” Clark continues. “They were found guilty of a bogus charge and the Home Guard made them dig their own graves, then shot and executed them.”

“Henry Berry Lowry was just coming home, and witnessed the shootings,” Fields says. “He was 17, really just a kid. At that moment, he vowed vengeance. He literally became like Robin Hood, robbing the rich and bringing money back to the poor. It was an eye for an eye. In today’s terms, he was fighting domestic terrorism. Lowry brought a sense of security to the community.”

Legend has it that he killed as many as 12 people and stole tens of thousands of dollars before disappearing in 1872.

“Although not everyone agreed with his actions, he embodies the characteristics that helped us persevere as a people,” Fields says. “He was gritty and tenacious. They could never keep him jailed. An example of how emboldened he was is that he would shave his beard and join his own search parties to gain intelligence.”

In 1958, when the Ku Klux Klan held a rally against the Indians at Hayes Pond near Maxton, the Lumbees banded together as the Lowry gang had nearly 100 years before.

According to news accounts from the time, several hundred Indians swarmed out of the darkness, firing guns into the air. The Klan fled. No one was killed, but the rout was heralded as “the night the Klan died in North Carolina.”

Fields says her mother left to become a hairdresser in Charlotte in the mid-1950s, in part because of racism toward Indians. But on weekends and holidays, they would often drive the 100 miles back to the family homestead. “We ‘stayed’ in Charlotte,” Fields says, “but our home was Robeson County.”

“Here in 2017, you still have a group of native people living in the place they’ve lived in for hundreds, if not thousands, of years, holding on and honoring their native identity,” she says. “When you look at how we were marginalized and how we hemmed ourselves into this area, we were all we had. That sustained us for a very long time. We are rich in family. We are rich in how we take care of one another.”

Some historians have suggested that the Lumbee were descendants of Native Americans and European settlers from the Lost Colony who disappeared from Roanoke Island in the 1580s. Fields is skeptical. She believes they are an amalgam of post-colonial tribes along with non-Native American settlers — accounting, she says, for her cousin Willie’s piercing blue eyes.

She traces her ancestry to John Oxendine, who, according to colonial records, was born in Virginia to an indentured white servant and an Indian man. He moved his family to the Lumber River area in the mid-1700s, Fields says, to escape laws against mixed-race people and to live where he could be “in control of his own destiny.”

“The swamps proved to be a place of refuge for the Indians,” she says. “People came from all over into this isolated area for security and protection. In 1956, we selected the name ‘Lumbee’ for who we are today. It represents all of these tribal people that contributed to our blood.”

North Carolina recognized the tribe in 1885, but the federal government has refused. Fields is philosophical about it: “I’m not going to be any more or less Indian with a stroke of a pen. That blood is what keeps us together as a tribe.”

Now that she’s back in Robeson County, she brings her 2-year-old granddaughter there as often as she can from her home in Gastonia. Hand in hand, on the family’s farmland, they walk the paths that Fields walked as a child and her mother walked before her.

“To see those little feet in the sandy soil of Robeson County makes me happy,” Fields says. “My soul feels real and right, and I know I’m where I’m supposed to be.”