Sure, most things are created out of need. An ax, an iron, an umbrella. But sometimes you just want something. Todd Childers wanted a hat. A baseball cap with a leather North Carolina flag patch just above the brim.

Todd’s wife, Ivy, had no more sewing experience than a brief fling with high school home ec, but she thought she might as well try to make one. Todd had an old hat, and he found some vegetable-tanned leather — that is, leather tanned with nontoxic ingredients found in tree bark, leaves, fruits, and roots. In August 2018, Ivy cut that first small NC flag patch, hand-painted it red, white, and blue, stamped an “N-star-C” on it, distressed it, and riveted the patch onto the hat. From old things come a new, beloved thing, and people wanted those patch hats. 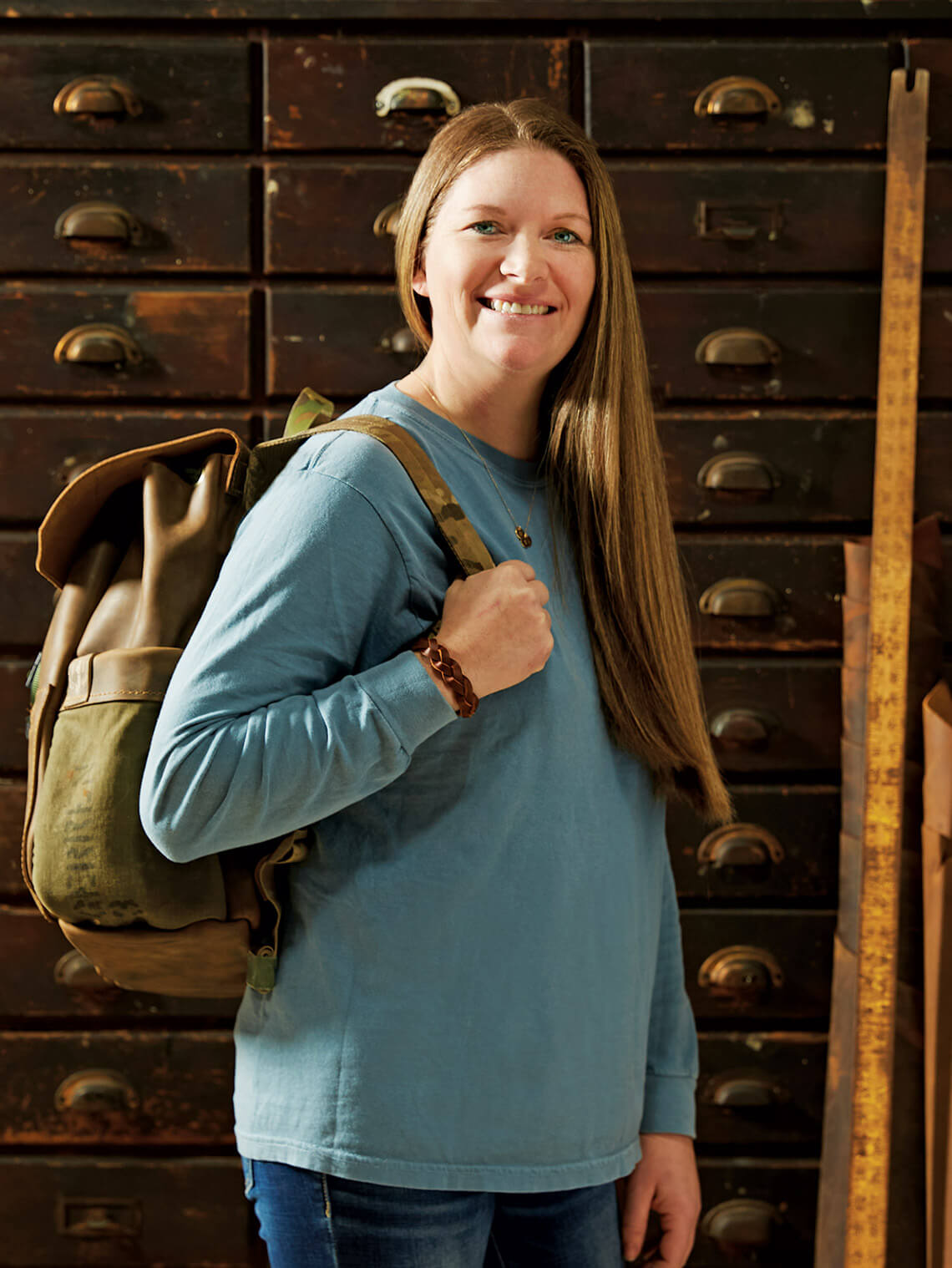 Ivy Childers’s love for bags, and her sewing ingenuity, have yielded a bevy of leather totes, satchels, and packs. photograph by Stacey Van Berkel

Repurposing something old and no longer used into something new and useful wasn’t a foreign concept for the couple. Todd grew up in Hickory, where his family was in the antiques business. He and Ivy met while both worked for Walmart. They eventually left to open Vineland and Hickory, a home design and decor store in Sanford, where they make and restore country farm furniture. The store’s name is a nod to Todd’s hometown and the city in New Jersey where Ivy grew up. Among their flea market finds was an old industrial Singer sewing machine, and, well, “I’m a bag lady,” Ivy confesses. Travelling for Walmart, she’d carried “every kind of bag you can imagine” to match her outfits. The leap from creating a hat to creating a bag didn’t seem far, and in April 2019, Ivy gamely put the old Singer to use “with some upholstery leather, just to get my bearings.”

As with any creative undertaking, plenty of trial and error was involved. “We tried to foil-burn the logo and ruined quite a few — that sizzle! Then I got on YouTube.” Because the pair wanted full hides only from American tanneries, the Internet was also invaluable in sourcing leather. Fortunately, “The leather community online shares everything,” Ivy says. Adopting the slogan “Southern Charm with a Northern Attitude” as a nod to their respective roots, Ivy and Todd launched the brick-and-mortar Home State Made in Sanford the day before nonessential businesses had to close due to the pandemic in March 2020.

Leather smells like comfort. You know that aroma, of stables, and autumn, and age. Of flight jackets and wallets, harnesses and books. That scent is pervasive at Home State Made, home as well to the winner of Our State magazine’s Made in NC Award in the Style category: the Traveling Soldier bag.

The Traveling Soldier bag — a standout in this high-ceilinged, concrete-floored room of handbags, totes, duffels, and a myriad of other handmade leather goods — was inspired by Ivy’s husband and father-in-law, who both served in the Army. Every piece and part of this unisex backpack — side pocket, computer divider, front zipper pocket, key clip, drawstring top with flap and buckle, and shoulder straps — is measured, cut, stitched, and riveted right in front of any visitor to Home State Made. Each one takes three days to assemble, and each one is wholly unique.

But for the leather itself, which might be distressed, embossed, or smooth, depending on a client’s preference, the other elements of the Traveling Soldier bag are repurposed military fabric. One features pieces of an old Army cot and duffel, complete with inscrutable official lettering. Another bears a front made from a U.S. Navy blanket discovered at the annual Liberty Antiques Festival. The combinations are endless, dependent only on the customer’s wishes; Ivy’s imagination; and the flea markets, military surplus stores, and local ex-military folks who bring in their used equipment and apparel. Sturdy but supple, beautiful yet practical, the bag is a handsome, personal, custom-made piece of work meant to last a lifetime and beyond.

A long way from her corporate career, today Ivy’s in a T-shirt and jeans, surrounded by the tools of her self-taught trade: an anvil for hammer-setting rivets, a burner for logo patches, brass letters for monogram imprints, a rotary punch, die punch, and templates. Vintage library card catalog drawers contain cinches, D-rings, and buckles, the hardware of leatherwear. Shelves hold bolts of leather — occasionally navy or deep green, but mostly the familiar, earth-toned hues in varying weights, finishes, and thicknesses. Thicker, stiffer leathers become notebook covers; thinner, more flexible leathers become pillows or pockets. Here, too, are heaps of leather scraps, because nothing goes unused. An irregular castoff becomes a cover for the searing-hot handle of a cast-iron skillet. Tiny leather dots punched out for washers or buckle holes become earrings.

Oh, and those? Those are cow tags. After a day of “picking” at an antiques store on a dairy farm, Todd returned with a box of numbered metal pendants that had once dangled on chains around cows’ necks to identify them. These cow tags range from small arrowhead shapes to simple staples in brass, tin, and copper, and one is fastened to every bag that Home State Made creates. People have tried to buy outright the old metal pendants, which go for $30 each at flea markets, but Ivy can’t bear to part with them. Neither can she bring herself to take apart the old Army stretcher, complete with metal stirrups, that’s propped decoratively against a metal Army clothes locker, for Home State Made’s line of military bags. Instead, she’ll return to the workroom’s “creative chaos” of webbed straps, zippers, and even the frayed and faded seams of a Vietnam War-era parachute bag used to air-drop supplies. The thick felt that protected the supplies is transformed into protective padding inside the Traveling Soldier bag. 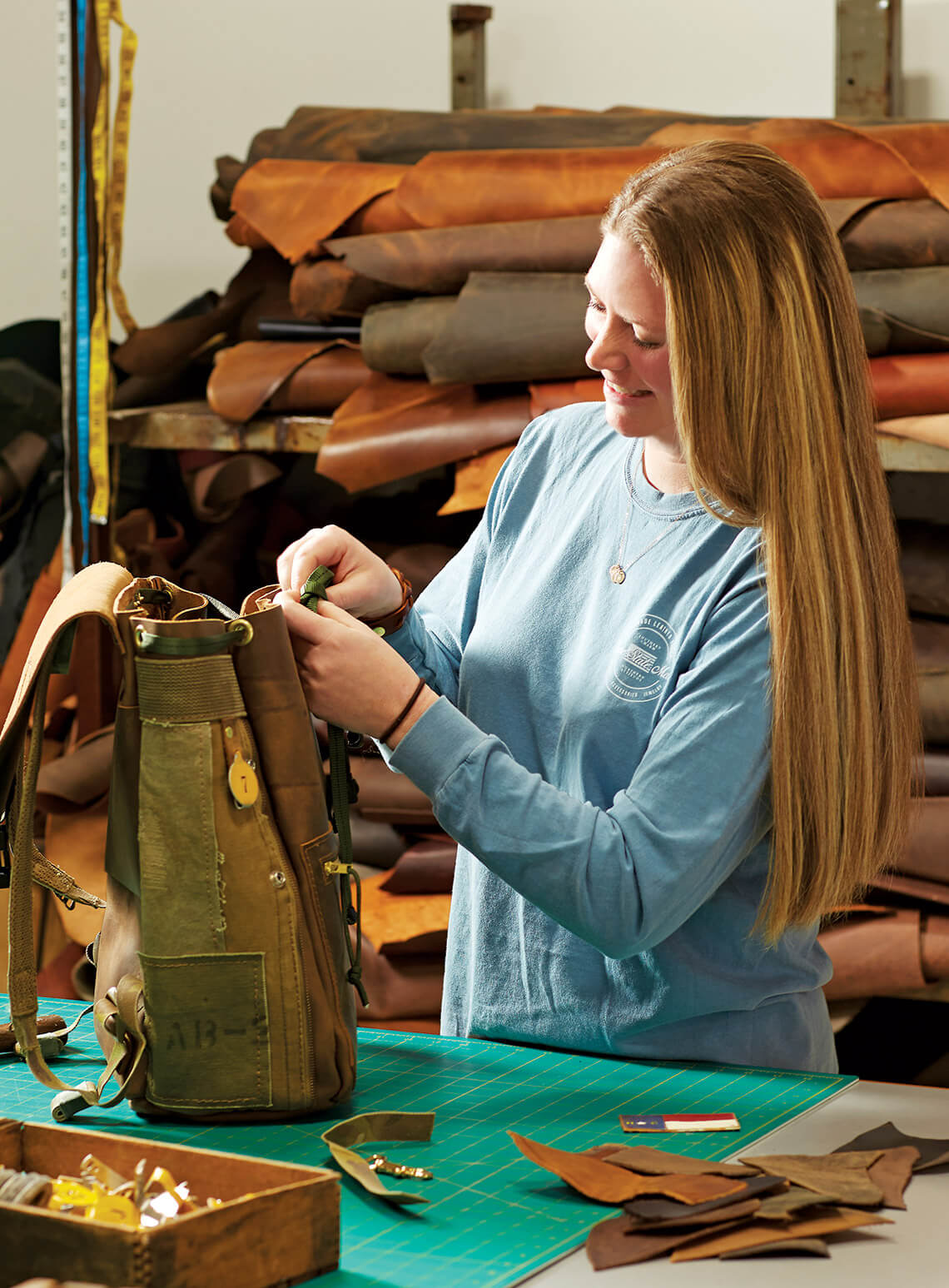 The letters printed on an old Army duffel become a design element on a Traveling Soldier backpack, as well as a nod to the military service of Ivy’s husband and fatherin- law. The North Carolina flag on the strap “is to remind you of home on your travels,” she says. photograph by Stacey Van Berkel

Speaking to the one-of-a-kind nature of every bag that Home State Made creates, the “Buy Now or Cry Later” sign painted on one wall is mighty motivating. My preservation-passionate mother-in- law, who grew up going to dances at Fort Bragg, would have loved a Traveling Soldier bag to haul her supplies while she gave tours of historic buildings around Fayetteville. Maybe I could convince my husband to swap his broken-down briefcase for a roomy Home State Made messenger bag. But … nope.

Instead, I’ll take this hair-on-hide crossbody — for which Ivy measures a shoulder strap to the perfect length while I’m standing in the store. Not because I need it. But because, like Todd and that leather patch hat at the heart of Home State Made’s origin story, I just want it.