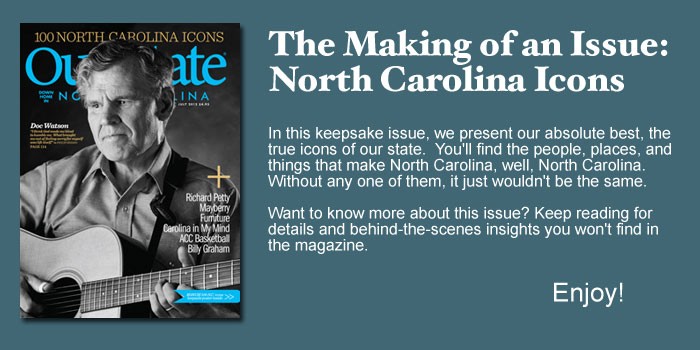 In our July 2012 issue, you’ll find the people, places, and things that make North Carolina, well, North Carolina. Without them, it just wouldn’t be the same.

For the better part of a year now, we’ve been asking ourselves, “What makes North Carolina unique?” “What makes our state unlike any other?” We put those questions to you, our readers, via our Facebook page. We asked them of our writers. We asked them of our photographers. The answers to those questions made our list of 100 North Carolina Icons. And in this issue, we share them with you on a special pull-out keepsake poster.

In addition to that list of one hundred, we give you in-depth stories about seven of those icons. We chose these from our larger list for a reason. Because Doc Watson, Richard Petty, Mayberry, the song “Carolina in My Mind,” and others are the first things that come to mind when someone from another part of the country hears a Tar Heel say with a Southern accent (which is number 99 on the list), “I’m from North Carolina.”

We hope you’ll agree with the choices we made, but we also know we could have created a list of 200 North Carolina icons, so read the list and tell us what we left off! Post your comments on our 100 North Carolina Icons page, where you can also download a checklist to mark the icons you’ve experienced, or at facebook.com/ourstatemagazine. We can’t wait to hear from you!

From Michael Graff, writer of “The King.” Richard Petty gave me great access to him during the course of reporting this story. Photographer Geoff Wood and I spent an afternoon with him at his shop, and then trailed him for an entire day at Martinsville Speedway. Just before the race, The King was pushed into the role of Grand Marshal, after actor Gary Sinise was involved in a car wreck and had to cancel. The next week, I met Petty at Krispy Kreme in Greensboro, where he was signing autographs to raise money for Victory Junction Gang Camp. When I walked up, he said, “Thought I got rid of you?”

A Scotsman Among Us

We travel this month to the Grandfather Mountain Highland Games. The games themselves are rich in history and tradition, and when it came time to put the photo essay together, we had wanted to make sure we had it right. Doug Alexander, an Our State staff member of Scottish descent (and yes, he has been known to wear a kilt in the office) helped answer some questions and even gave a brief Scottish history lesson to some members of the editorial staff.