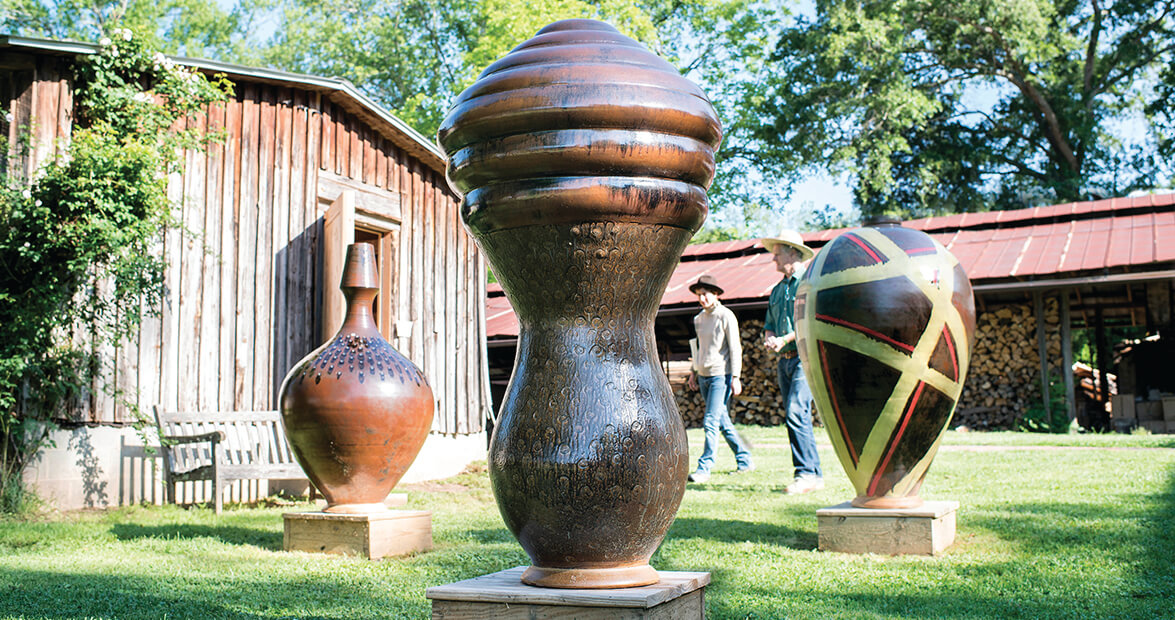 Entering the kiln is like visiting the underworld, a realm of earth and fire. You duck under an arched doorway into an upside down boat made of fire brick, its vaulted ceiling tapering on both ends. On the side, a doorway opens into the light, a working entryway farthest from the heat.

At one end, the prow of the boat, is the fire box, the engine of transformation. A brick chimney spikes through the corrugated roof of the kiln shed as if it grew there naturally.

The fire is cold, yet the air in the kiln holds a memory of heat, the arching brick glazed to a sheen and redolent from the firing of some 1,500 pieces: platters, casserole dishes, cups, vases. Five days to load, three and a half days to fire, and a week to allow the kiln to cool.

The kiln is based on a 14th-century Thai design, and it works in a manner similar to the groundhog kilns found throughout the South, dating back to the days when potters were not considered artists so much as indispensable artisans of the practical — like blacksmiths and cabinetmakers — making everything from bowls and pitchers to moonshine jugs.

In the grassy farmyard of Mark Hewitt’s studio outside of Pittsboro, people mill about, admiring his giant urns, inlaid with bits of stained glass or incised with original patterns, their glazes shimmering in the afternoon sun.

Hewitt is a soft-spoken man with steady blue eyes and a self-deprecating manner. It’s the final day of a two-weekend-long kiln-opening sale, one of three he conducts each year, and this one has been a smashing success. Only about a hundred or so pieces remain unpurchased, and they are going fast.

Hewitt’s farmstead seems remote, bordered by pastures and a large pond. But that sense of remoteness is deceptive: 30 miles east lies Raleigh, and even closer to the northeast is Chapel Hill.

Hewitt first saw the property more than 30 years ago, when he came to the kink in Johnny Burke Road. He surveyed the house and cow barn and other outbuildings, most of them in need of repair, and as he contemplated where a chimney could be located, a heron flew across his field of vision. His mentor used to paint herons on his pieces, so Hewitt figured this was an omen.

The connection between pot-making and a totemic bird, between the practical and the mystical, cuts to the core of the potter’s art. It was, after all, the potter’s art that made civilization possible: When humans abandoned daily hunting and gathering and began farming, they needed a way to store food against heat, rot, and vermin. This paved the way for permanent communities, culture, and art — the contemplation of beauty and mystery.

Hewitt’s majestic urns have been shown in museum galleries, but much of his work is meant to be used, in the tradition of Piedmont potters. A hand-lettered sign reminds visitors that the casserole dishes can go into the oven — that is, after all, where they came from.

The foundation of the art of his pottery is “wild clay” — not the dehydrated stuff that many commercial studios buy in bulk, that comes from everywhere and nowhere. Hewitt used to pulverize local clay himself, adding water and screening out flakes of iron and other impurities. Now he gets his clay from STARworks Ceramics in Montgomery County.

Wild clay, the earth from home ground, shaped by an experienced hand, hardened by fire, glazed, and refired: There’s something wonderfully elemental about the whole process, a connection to our ancestral quest to create community, to share food and drink, to come out of caves and into the light.

A native of England, Mark Hewitt has been living in Pittsboro and shaping its local clay since 1983. In spring, late summer, and early December, he opens his kiln and workshop to the public. Up to 1,500 pots made by Hewitt and his apprentices will be for sale at this year’s summer kiln opening on August 27 and 28, and September 3 and 4. For more information, call (919) 542-2371, or visit hewittpottery.com.