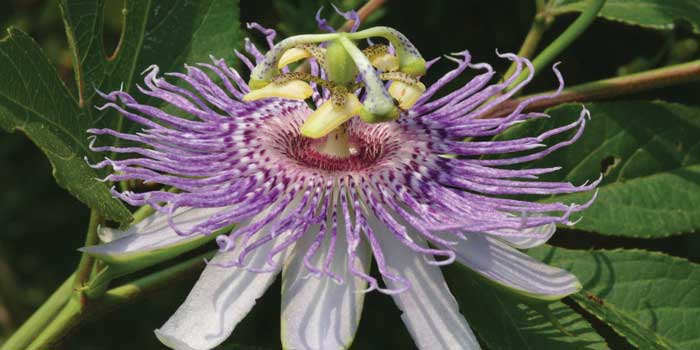 Few plants are known for their sound. But a maypop is one of those auditory few that makes its mark by making a noise.

If you grew up in a rural area, tromping through fields and pastures, then you probably know that distinct pop. It was fun to find a plant to play with. To step on the pods, squash them with your shoe, and listen to them burst.

But there’s more to a maypop than those lime-size pods. Maypop, Passiflora incarnata, is also known as passionflower. It grows in every county in North Carolina. The plant’s bloom is one of the most intricate of all native flowers, says Jeffrey Pippen, an instructor in the Nicholas School of the Environment at Duke University.

The name passionflower came from the early European settlers who thought parts of the bloom resembled the Christian crucifixion story. The petals are the disciples; the five stamens, Jesus’s wounds; the stigmas, nails; and the fringe at the end of the sepals, the crown of thorns.

The blooms usually appear in June through September. And then the pods follow in the fall. The fruit, in addition to being entertaining, is also edible. American Indians ate the fruit and used the root for medicine.

Today many people plant maypop seeds and root its cuttings. The vine can reach 25 feet long, running across the ground or climbing fences, arbors, and walls. It’s a good alternative to nonnative vines that can spread rapidly and become invasive.

The maypop plant also provides food for the native Gulf fritillary butterfly, Pippen says. In his 15 years at Duke, Pippen has worked extensively with flora and fauna across North Carolina. He teaches classes on biodiversity and its importance to our environment. He makes sure that his students go out into the field during every class period.

Whatever the lesson, no method of teaching beats firsthand experience. Just ask someone who remembers playing outside as a child. If they ever stepped on a maypop, they’ll remember the plant and the sound it makes — pop.