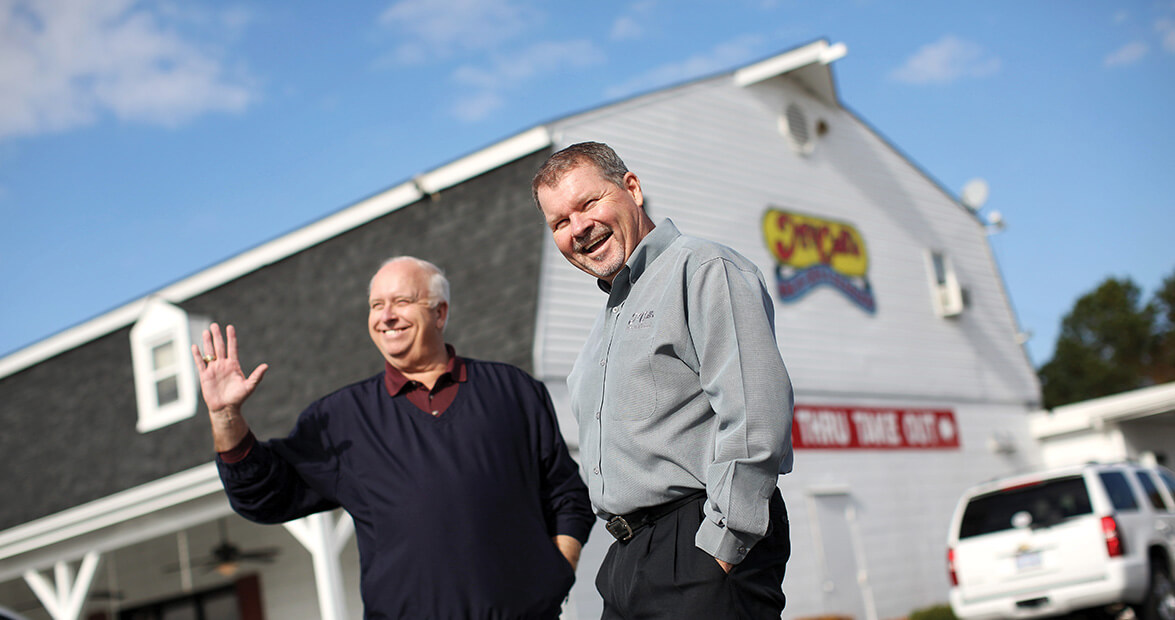 Randy McCall winces as if he’s thought of something disturbingly ugly and difficult to consider.

“Have you seen some of the ingredients people are putting in barbecue sauce these days?” he asks. “A lot of this stuff just doesn’t belong. I just don’t get it.”

Fans of McCall’s Bar-B-Que & Seafood, however, figure that Randy McCall and his partner in swine, Worth Westbrook, get it just about exactly right. For 25 years, the big white barbecue barn on U.S. Highway 70 on the outskirts of eastern Goldsboro has been a mainstay of eastern North Carolina barbecue culture. And over time the business has grown to include a location in Clayton (opened in 2004) and a catering division.

But even at a quarter-century old, McCall’s is the new kid on the pork chopping block, because breaking into the heritage-rich world of slow-smoked swine in eastern North Carolina isn’t easy. 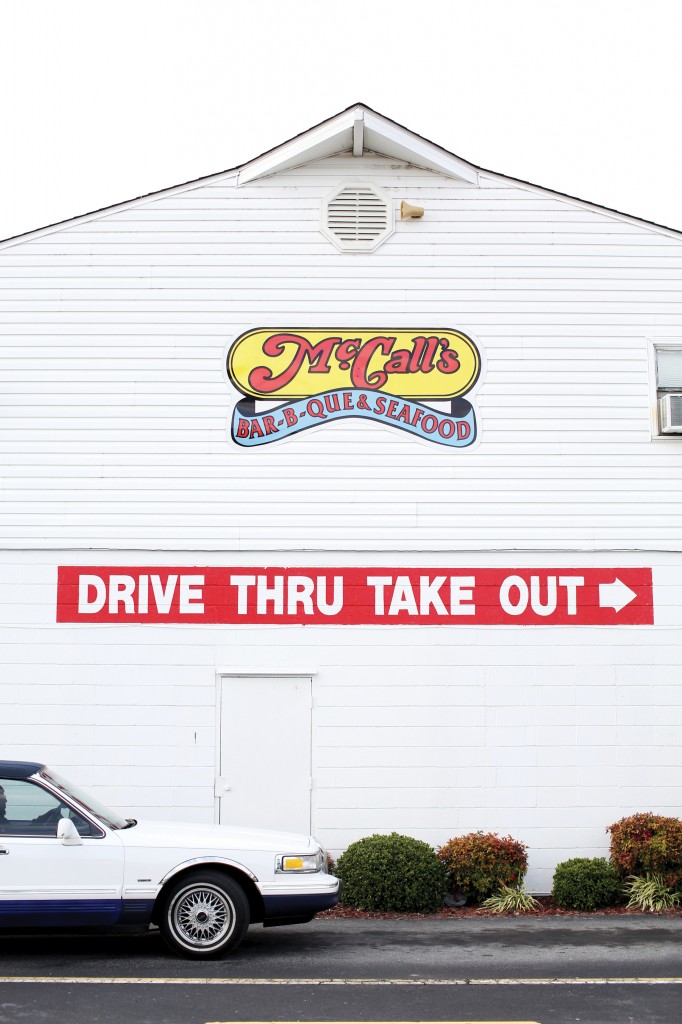 McCall’s has a drive through window that delivers everything from oysters to fat back. Worth Westbrook and Randy McCall are co-owners of McCall’s Bar-B-Que & Seafood with locations in Goldsboro and Clayton. photograph by Travis Dove

McCall’s has a drive through window that delivers everything from oysters to fat back.

McCall and Westbrook were district managers for Ralston Purina Company in the early 1980s when they shared a dream of co-owning their own business. “To be honest,” Westbrook says, “we looked at everything from lawnmower shops to plumbing supplies.” Both men felt the gravitational pull of pig, however.

Westbrook grew up on a Bentonville tobacco farm, where “just about everybody cooked pigs,” he says.

McCall, a native of far-western Brevard, might not have been born and bred into eastern North Carolina barbecue culture, but he was baptized soon enough. As a young soldier stationed at Seymour Johnson Air Force Base, McCall fell so in love with a nearby barbecue shack that he bought the business from its owner, Elmer Davis, when frail health caused the gentleman to shutter his pits.

For several years McCall and his wife, Martie, ran their own weekend barbecue shack, Country Kitchen BBQ, with the DNA from Davis’s beloved diner. “I paid maybe $175 for his old slaw machine and a couple of pots,” McCall says. “But I also got his recipes.”

Those treasured secrets formed the backbone of the restaurant McCall and Westbrook opened in 1989.

“The first three months we were open, I lost 55 pounds,” Westbrook says. “That’s how hard we worked. We weren’t drawing a paycheck, and I wouldn’t buy new pants, so my mama sewed buttons on my pants so I could wear suspenders. It was three years before we could take a breath and say, OK, this is gonna work.” 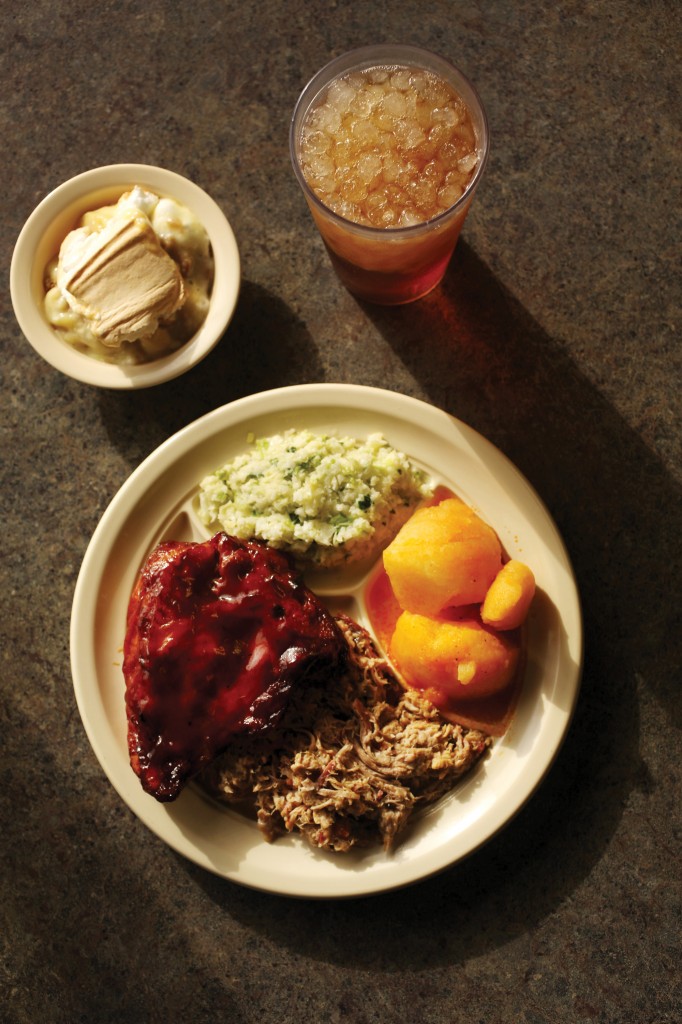 A plate of chopped BBQ pork, BBQ chicken, BBQ boiled potatoes, and slaw with along with McCall’s delicious banana pudding and a sweet tea

McCall’s is best known for its buffet, a 10-hour-a-day spread. I showed up with an empty belly and a full desire to sample as much as possible. It was a typical midweek lunch crowd — at 11:50 a.m. nearly every table was full. On all but the stormiest days, the lunch buffet is “all hands on deck,” says Kelly Doss, McCall’s event coordinator. It’s a Noah’s ark of country cooking.

In addition to steaming cauldrons of pork barbecue, there’s barbecued chicken, fried chicken, chicken potpie, chicken and dumplings, and Brunswick stew. Then there are two kinds of pork skins, two kinds of field greens, beans, peas, corn, boiled potatoes, mashed potatoes, squash, and more. There’s a full fruit bar, a separate salad bar, and a 13-item dessert bar whose star attraction — banana pudding — might have as many fans as the restaurant’s barbecue.

But, first and foremost, McCall’s is a barbecue joint, and its fate rests on what it can do with pig, fire, vinegar, and salt. So pigs are cooked every day of the week, and there’s pig on the pits most hours of each day. Pork shoulders are loaded into a giant gas-and-charcoal rotisserie at 8 p.m. every night — think of it as a Ferris wheel of swine, whirling and sizzling till sunrise. The shoulders are then moved to a pair of 20-foot-long pits where smoldering white oak coals are fed from logs that have burned all day in an adjacent fireplace. Shoulders are smoked for a minimum of four hours, then chopped by hand and seasoned with salt and the vinegar-based sauce handed down from Davis.

The sauce is as simple as it comes. “It comes from that old farming culture, simple and straightforward,” McCall says.

It’s like the man knows he better not put on airs. Not with barbecue. And certainly not in Wayne County.

“Look here,” McCall says, “Goldsboro is a barbecue town. The richness of the tradition here, you just don’t mess with it. There was Griffin’s and Scott’s Famous Barbecue, both now gone. You’ve got Grady’s not far from here. And there’s Wilber’s just up the road.”

“And McCall’s,” I say, adding his namesake restaurant to that pantheon of greats.

He sits back, quiet for a moment, almost reluctant to consider the thought. Then he grins, a little sheepishly, and glances at Westbrook. It’s been a quarter-century. They’ve earned their place.