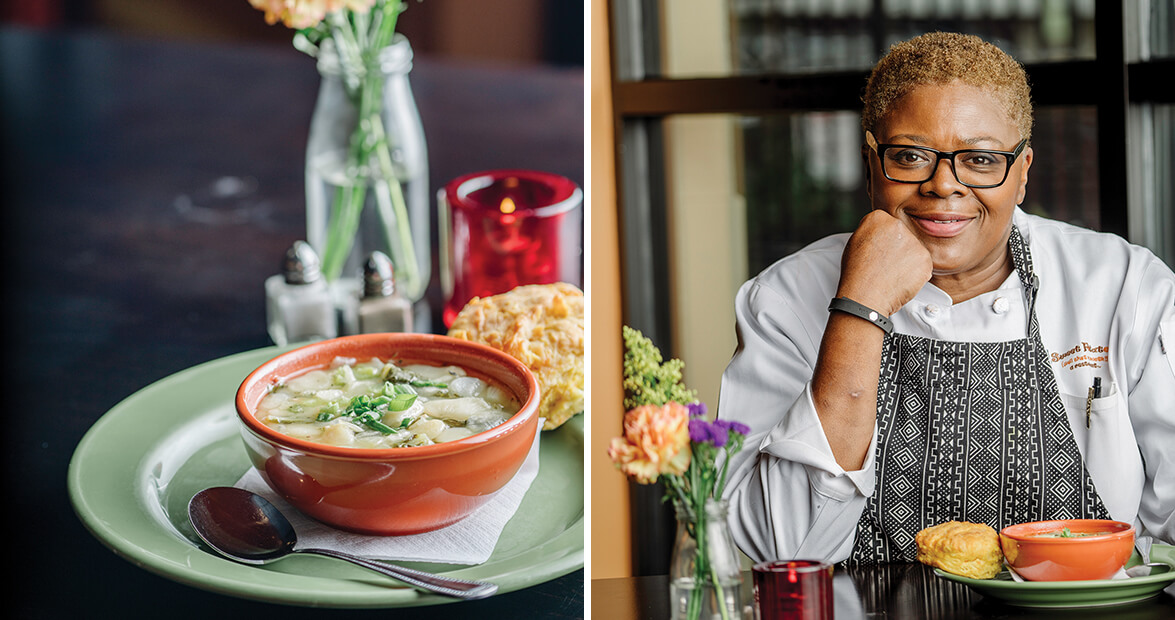 It was the middle of the night, a Saturday shifting into Sunday, the jammy sky sandwiched between dusk and dawn. Stephanie Tyson was asleep at her grandmother’s home in Winston-Salem when a clattering from the kitchen woke her. She went to see what it was: There, standing at the hot stove, was her grandmother Ora Porter, frying chicken wings. “And then she would go back to bed,” Tyson says, smiling at the memory. “She would say, ‘I’m not going to stay hungry, ’cause I grew up that way. So when I feel hungry, I cook.’ ”

This happened again and again throughout Tyson’s childhood, like a recurring dream. On Saturdays, Tyson’s mother dropped her and her brothers at their grandmother’s nearby apartment, where they were welcomed with warm biscuits and a pot bubbling on the stove: usually butter beans, Tyson’s favorite. Now those beans are in regular rotation at Sweet Potatoes (Well Shut My Mouth!), the restaurant Tyson opened with her partner, Vivián Joiner, in 2003. “We wanted to start something that reflected how I grew up eating,” Tyson says.

Because her grandmother couldn’t read or write, Tyson learned by watching. And tasting. That was one of her few approved kitchen tasks. Slurp after slurp of those butter beans and finally, she says, “that flavor just stuck.” The childhood memory is the recipe, and she’ll never forget it.

The beans were soupy, but Tyson’s grandmother never called them soup. They were brothy, salty, and smoky from ham hock, and deeply flavored from onion, celery, and green bell pepper. “It was a meal. Good, hearty, simple,” Tyson says. “Get a biscuit and you were set.”

At Sweet Potatoes, Tyson has transformed her grandmother’s soupy beans into butter bean soup, which, in turn, has become the base for all kinds of other soups she makes. “It’s always different,” she says of what’s bubbling with the beans. “Soup is whatever we have in the walk-in.”

On New Year’s Day, she swaps out the butter beans for black-eyed peas and calls it “Good Luck Soup.” Other times, she’ll add curry and coconut — flavors that pay homage to Joiner’s family — and call it “Gullah Gullah Soup.” Whatever the name, it’s still seasoned with Grandmother Porter’s resourcefulness, hospitality, and warmth. “Everything I saw my grandmother do, I do,” Tyson says.

There’s comfort in consistency, especially when so much is changing around us: Winston-Salem has grown from Porter’s day. The entire Arts District — Sweet Potatoes’ neighborhood — sprang up between Tyson’s childhood and now. The chef pats the front pocket of her white jacket, filled with plastic spoons, and laughs — she’s still tasting butter bean soup, over and over and over, until it matches the memory. — Emma Laperruque

In a medium pot, add butter beans, ham hock, and 8 cups of the chicken stock. Bring to a boil for about 30 minutes. Reduce to a simmer and add greens. Cook until the beans and greens are tender, about 1 hour.

Heat skillet on low and add bacon fat, onions, pepper, celery, and carrots. Cook until vegetables are soft, about 5 minutes. Add the garlic and red pepper flakes. Cook for an additional minute.

Add vegetable mixture to the pot of greens and beans. Add remaining stock and simmer for 30 minutes. Add water if beans become too thick.

Remove the ham hock from the pot, cut the meat off the bone, and add it back into the pot. Serve with cornbread for a one-pot meal.