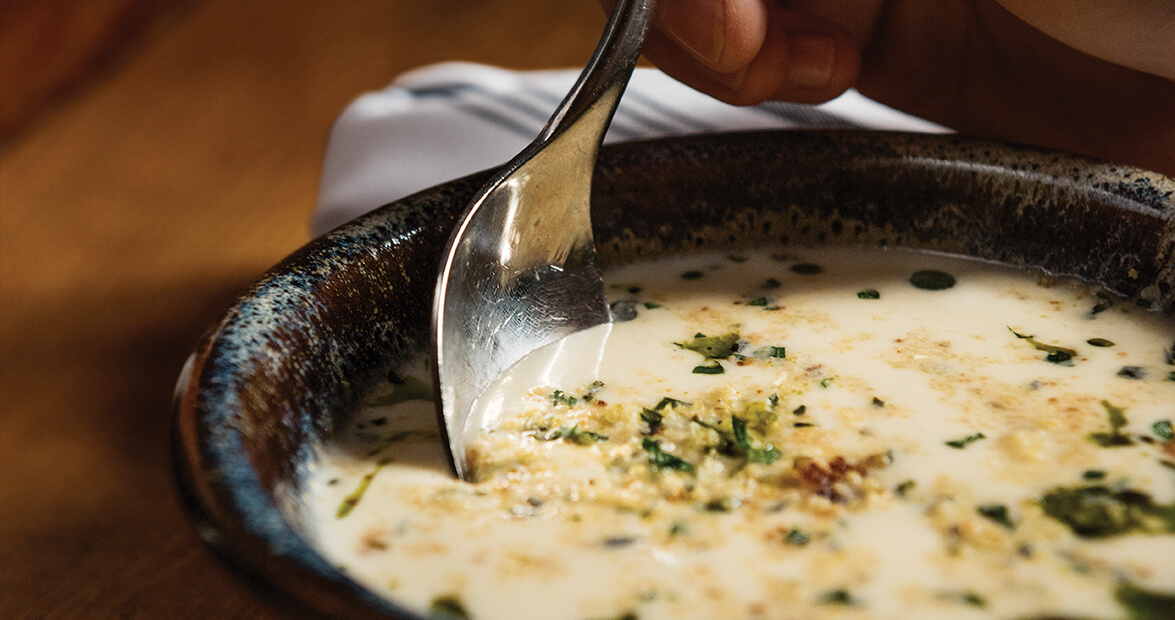 The small bowl of buttercup yellow soup was a surprise appetizer, so I didn’t know what I was lifting to my mouth.

Then I did — pure mountain memories: My great-aunt Johnnie standing in the cool, dark kitchen, slicing just-picked cucumbers into a bowl of ice, putting it in the icebox, and bringing out a quart of thick, pale yellow milk. “I believe I need a little something to tide me over until supper,” she says, a big wedge of last night’s cornbread in her hand. “How about you?” She crumbles most of it into a wide, tall glass. She puts the crusty part in a glass for me. Then, before she pours the buttermilk, she raises an eyebrow and asks, “You want sweet milk instead?” I nod yes, my child’s palate not appreciative yet of buttermilk’s tangy richness. We sit at the table to eat, me with my cup and teaspoon, Johnnie with a long-handled teaspoon to get all the goodness at the bottom of her tall glass. 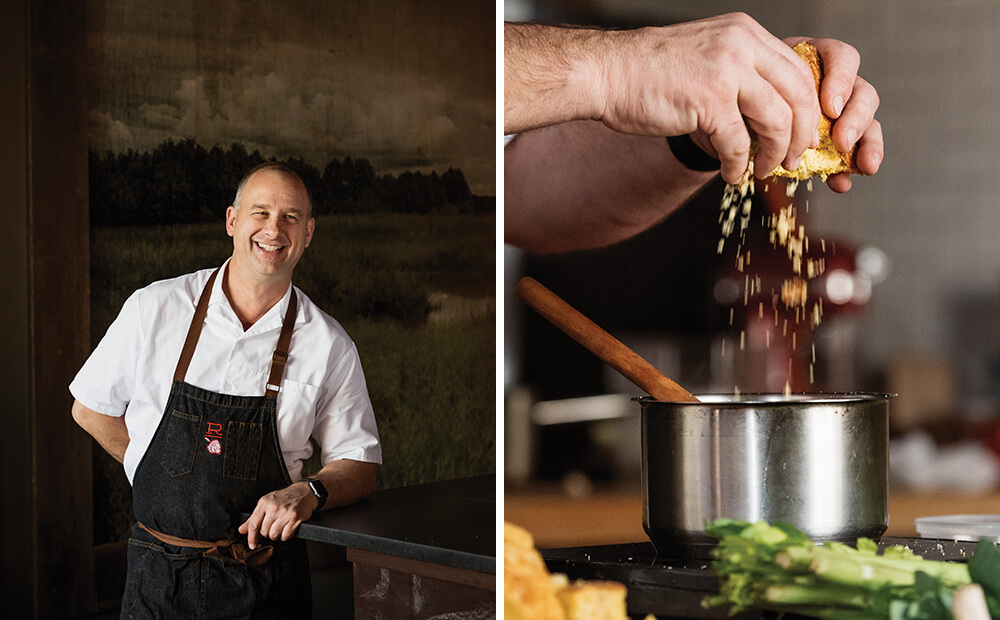 In my 30 years of asking folks with Appalachian roots about the foods they grew up eating, not one has failed to mention this simple dish. Some prefer it with plain milk (often called sweet milk in the mountains) and some with buttermilk, and plenty of folks believe there should be a raw onion in the mix. Someone told me that in their neck of the woods, it was called “crumble-in,” but most of us just knew it as “something good.” That’s what my father would say he needed a couple of hours after supper, asking, as he headed to the kitchen, if there was any cornbread left. It was fine in sweet milk, he said, “but buddy, if you have buttermilk, that’s the trick.”

The magician who translated this beloved snack into a warm, velvety masterpiece is Chef John Fleer, owner of Asheville’s Rhubarb. A North Carolina Piedmont native, Fleer wasn’t born to the Appalachian table; he just took to it with heart and soul. Dishes like merkel pie — a shepherd’s pie centered on morel mushrooms (called “merkels” in some parts) — cocktails enriched by sorghum syrup, and just about anything with Allan Benton’s ham and bacon have earned Fleer due credit for bringing the breadth and depth of the Appalachian larder to the fine-dining scene. But nothing is as fine a translation of tradition into poetry as Fleer’s buttermilk cornbread soup.

His soup is filled with that medley of flavor: the substance and sweetness of corn; the faint whisper of bacon grease from the skillet the cornbread was cooked in; the aromatic accent of simmered leeks; the deep, throaty tang of the best buttermilk, all blended to the smooth silkiness of a dream.

“Did you grow up eating this?” I asked him recently. “I knew nothing about it when I moved to east Tennessee,” he said, referring to the early 1990s, when he became head chef at Blackberry Farm and created a menu based on what he then called Foothills Cuisine. I’d heard stories about his drives around the back roads then, how he’d stop in country stores and talk to old-timers about the foods he’d found, the ways people used them. “It was a teenage dishwasher who turned me on to it,” he added. “Couldn’t believe I’d never eaten it.”

Fleer says the kitchen will often change the garnish, using summer savory when it’s in season or toasting the cornbread crumbs with chive oil. I tell him about the black walnut pesto I make for buttermilk cabbage soup, and share the story that Kentucky folk singer Jean Ritchie told me once: Her favorite treat was to trade off bites of cold cornbread with a piece of black walnut and a sip of cold milk.

His eyes light up: “Can I steal that?” It would be my pleasure.

Courtesy of Rhubarb restaurant in Asheville.

Add enough peanut oil to coat the bottom of a medium soup pot or Dutch oven. Place over medium heat. Add leeks and celery, and reduce heat to medium-low; sweat, stirring often, for about 5 minutes, or until vegetables become translucent. Add garlic and cook for another minute, then add chicken stock and cornbread. Bring to a low simmer, and let simmer for 15 minutes. Remove from heat.

Stir buttermilk and heavy cream together in a large bowl. Add the hot soup very slowly to the milk mixture, stirring constantly. Puree soup until smooth in a blender or with an immersion blender. Taste and season with salt and pepper. If the soup is too thick for your liking, add a touch of extra chicken stock.

Return the soup to the pot and heat very gently over low heat until warmed through. Serve with crumbled cornbread on top as a garnish. It’s also quite delicious served chilled.

A note on buttermilk: The better your buttermilk, the better this soup will be. When I don’t have Cruze on hand, I look for whole-milk buttermilk without stabilizers or additives. Smaller local dairies sometimes have this, and the organic buttermilk found in natural-food groceries is often good, too.