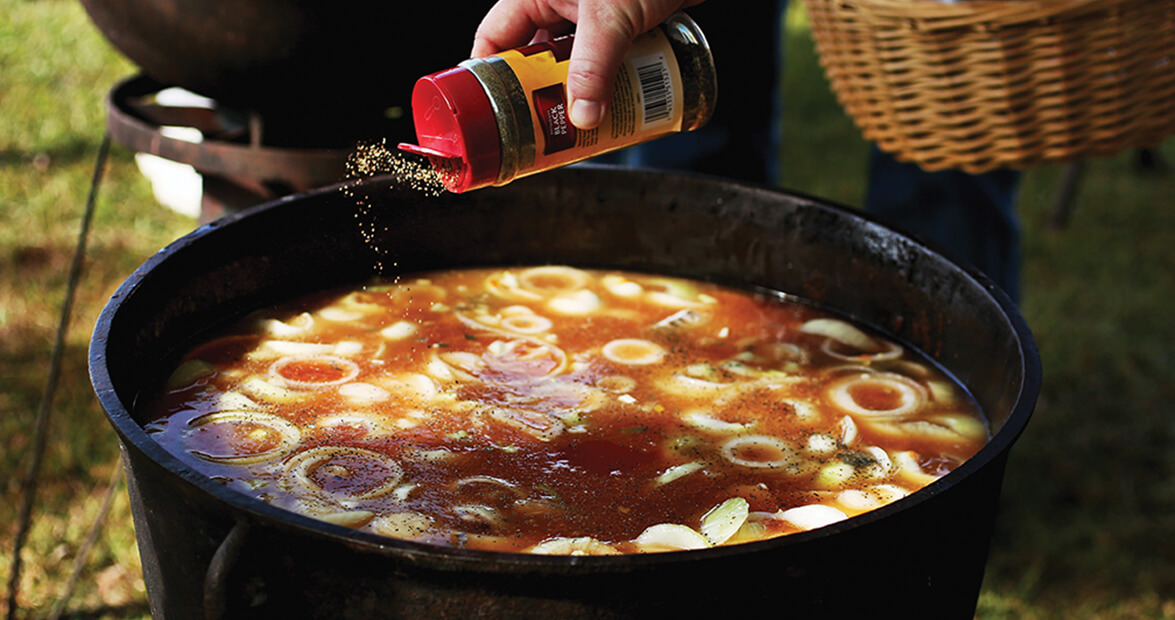 The bacon pops and smokes in the bottom of two giant, cast-iron cauldrons. Cousins Horace King Jr. and Francis Swinson have taken up their posts in the Pleasant Hill Christian Church parking lot on this, the fourth Saturday in October, as they have every year for at least a quarter of a century. King, 74, and Swinson, 76, tell their daughters, Jenell West, Amber King, and Michelle Clements, when the bacon is crisp enough to add the rest of the ingredients: the 15 pounds of potatoes and 13 pounds of onions that the daughters peeled and sliced the night before, along with hunks of rockfish that Jenell caught. As the stew simmers, the men take a taste and confer with their daughters on the seasonings. After a dash of this and that, they sit back, satisfied.

This simple eastern North Carolina fish stew is a tradition started on the banks of the Neuse River basin, using what was caught in the day’s nets. The beloved stew migrated to backyard gatherings and eventually found its way to church parking lots — like this one in Jones County — where fish stew events help congregations raise money for community projects. King and Swinson learned how to make it from King’s father, who was known for his fish stew feasts. “He’d invite the whole neighborhood,” King says. “All the kids would play. All the old folks would sit around, tell stories, and play horseshoes.”

Which is pretty much what still happens at churches today, as folks gather in these small crossroads communities in and around Kinston. Keeping watch over the big vintage pots — once used for washing clothes — as each unfussy ingredient slips into the broth, and waiting for the aroma to rise up with the steam and mingle with the crisp fall air, is a time-honored tradition.

In this patch of eastern North Carolina, fish stew means a very particular dish, explains Bob Garner, a food historian and correspondent for UNC-TV’s NC Weekend. Although chowders reign on the coast, fish stew and its cousin, fish muddle, dominate the inland areas. “Fish stew is more of an estuary stew,” Garner says. “On the Roanoke River basin, it’s called rock muddle, and they don’t put tomato in it. On the Neuse River basin, it’s called fish stew, and it’s found between Goldsboro and Kinston.” 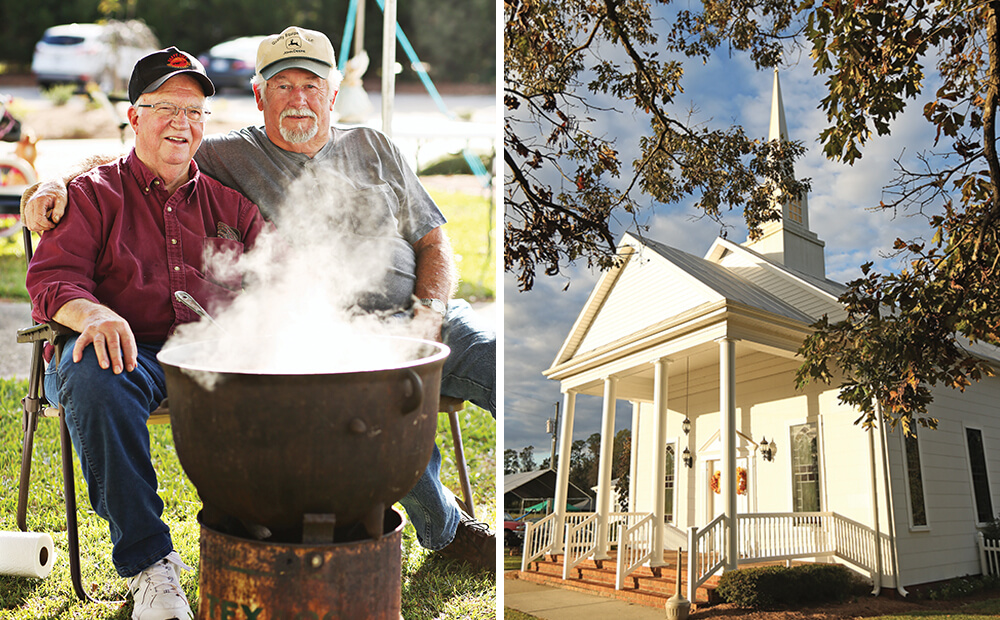 Garner’s church, Jarvis Memorial United Methodist Church in Greenville, started serving fish stew two years ago to raise money for Hurricane Matthew relief. The first year, half the diners told Garner they had never even tasted fish stew. The other half told him he was doing it all wrong — they were aghast that he didn’t peel his potatoes.

There are rules, you see: Nine humble ingredients — bacon, onions, potatoes, whitefish, water, salt and pepper, tomato paste or sauce, and eggs — are layered in the pot and left to simmer until the cook deems the briny, brothy stew ready. Rockfish, sheepshead, or red or black drum are preferred, all of which are commonly caught in the fall. Naturally, the cook might add a little secret something — cayenne pepper or red pepper flakes — but the recipe’s cardinal rule is upheld at all costs: No stirring. Ever.

The real showstopper comes in the last 15 minutes of cooking, just when the potatoes lose their bite and the soup starts coming together. Fresh eggs are cracked and added to the piping hot surface of the stew. The whites quickly form little islands in the broth, and the yolks steam over. Bowls are served with crackers and slices of bread for sopping.

Cooks who stray from this method can expect disdain. “Some people add sausage, shrimp, and scallops. Then you have a darn seafood stew,” grouses David Moore, one of the head cooks at Southwood Memorial Christian Church, a few miles down the road. Fish stew has been on the menu at Southwood’s harvest festival since it started 49 years ago.

Back at Pleasant Hill, Jenell, her sister, and their cousin are continuing a tradition of feeding the multitudes that began at this church shortly after her great-grandfather helped found it in 1835. “Coming here is like coming home,” she says, standing within sight of the cemetery tombstones bearing her relatives’ names. “It’s our grounds. It’s a sacred place.” Seated only a few feet away is the next generation: three little girls who are listening and learning, taking in the sights and smells for their eventual turn around the pots.

Cut the bacon slices into 1-inch squares. Brown it in the bottom of an 8- to 10-quart Dutch oven or cast-iron pot. Once it’s crisp, remove it and reserve. Whisk the tomato paste into the bacon fat, making sure you scrape up all the bits left from browning the bacon.

With the heat off, begin layering the ingredients. Keep in mind you want to end up with three layers. Start with a layer of potatoes, followed by a layer of onions and of garlic, if using, followed by a layer of fish. Top the fish with a third of the salt and a third of the chili flakes. Repeat with two more layers. Fill the pot with enough water to just barely reach the top of the fish. If there’s a little fish peeking out over the top, that’s ok — better than if it’s swimming in water. Cover the pot with a tight-fitting lid and bring it to a boil slowly over medium heat. Once it starts to boil, reduce the heat and let it cook at a high simmer for about 15 minutes. Check the potatoes for doneness. They should be barely tender, not falling apart.

Taste the broth and add more salt if needed. Then, with the stew at a good simmer, add the eggs one by one in a single layer over the top of the stew. I like to crack the eggs into a small cup before I drop them in. What you’re trying to do is cook whole eggs in the broth. Once the eggs are cooked through, use a large ladle to portion the stew. A proper serving is at least one piece of fish, two potatoes, some onions, and an egg swimming in broth. Shower each bowl with some bacon and set it up with a slice or two of white bread.