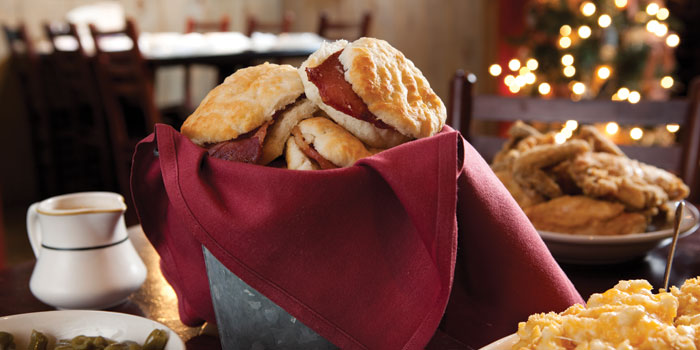 A waitress plunks down two aluminum pails on a table set for six. In each pail, the four corners of a burgundy kitchen towel wait to be unfolded. The 12 eyes around the table dart from one face to another as if to ask, without asking, who will be first?

Who will be first to reach out his hands without reservation, flick back the four corners, grab what’s inside, and pass the pail to the next person? Will it be the youngest of the six? The oldest? The least patient? The closest? Whoever it is will, as a consequence, reveal something about himself. Maybe his leadership. Maybe his greed.

This choice makes everyone at the table nervous. But eventually someone does go first, and he finds that there are biscuits in these buckets. Plain biscuits and biscuits with slices of country ham. As everyone begins eating, they forget who went first. Their concerns are more immediate and more primal. The biscuits are gone, and now they want more.

On an average Saturday night at the peak of the Christmas season, Mike and Theresa Lowe feed more than 1,000 people. They own Mike’s Farm, an agritourism destination in eastern North Carolina near the Duplin-Onslow county line.

And it is a destination if there ever was one. If not for Mike’s Farm, there’d be no reason for a thousand people to pass through, much less stop in, the community of Back Swamp — a place without stoplights, and few stop signs for that matter.

Around here, just a few miles east of Beulaville, the long, flat blacktop stretches straight into the horizon. Only the congested line of traffic turning into Mike’s Farm off Haw Branch Road slows travelers.

Not long ago, the Lowes never would have thought it possible.

Mike inherited the land on which his namesake sits from his father, who in 1945 bought about 10 acres in Back Swamp to farm tobacco. As it turned out, the community name reflected the nature of the land. The soil was poor, sandy and wet. Mike’s father farmed little more than an acre of his purchase.

Mike, 59, never attended college. His father couldn’t afford to send him. But when Mike’s father died, he left Mike and his three siblings the little he could give: the farm, divided among them.

Although Mike and Theresa knew the soil’s poor quality would prevent them from ever running a traditional tobacco or produce farm, in the late ’80s they tried growing Christmas trees. Virginia pines, Leland cypress, and cedars among them.

The couple worked together. Mike trimmed the sides of the trees. Theresa, on Sheetrock stilts, trimmed the tops. Traffic started to slow; then people started to stop. But the trees, particularly the Virginia pines, needed constant attention.

So except for the few cypress they still grow and the mature cedars they never cut, Mike and Theresa phased out the tree farm. From that spot, they grew something else: an 80-acre farm that now includes a gift shop, bakery, farm animals, and a 1.2-mile Christmas light show.

All of those attractions made people stop and stay for several hours. Then all of those people began to talk. They told their friends and family about a little spot in you’ll-never-guess-where, North Carolina. A place where you can do just about everything except eat a decent meal.

“I’d tell people to take Highway 111 down to Jacksonville or Highway 24 up to Beulaville,” she says. “Those were about the only two places to find something to eat.”

But enough people were stopping at Mike’s Farm — to take a hayride through the light show and shop — that Theresa knew she and Mike were missing out on an opportunity to round out the experience.

A dinner, she thought, could pay tribute to the farm’s roots. First, make it traditional. Give people fried chicken, pork loin and gravy, mashed potatoes, macaroni and cheese, corn, and green beans. Second, serve it family style. Put everything in bowls and let people pass them. Third, keep the food coming. Refill a bowl whenever it’s empty.

Theresa didn’t stop there. When she and Mike built the dining room, she decided that it, too, needed a farm theme. Now the dining room includes more country memorabilia than a Cracker Barrel, an indoor front porch with tables to seat several diners, and an outhouse in which a couple can enjoy a private, surreal meal.

Mike admits that much of what drives people to his farm is the spectacle. After all, the depiction of farm life is improbable. The ground on which the restaurant sits struggled to yield a meal for one family, let alone hundreds.

But when Mike considers all that he and Theresa have been able to do — have been the first to do — on ground once considered good for nothing, he doesn’t hide his pride. Consider just one number: 2,000. That’s how many biscuits, both plain and wedged with country ham, they serve on a Saturday night at the peak of the Christmas season.

Everyone who visits Mike’s Farm expects abundance. They want to do it all — the shopping, the eating, the light show. Maybe they do it because it’s tradition, whether with family or a church group. Or maybe because it’s one of the few indulgences that some hardworking eastern North Carolina families allow.

Every face around every table looks satisfied as the food arrives by the bowlful. And as each bowl is passed, each person realizes that the contents of those bowls doesn’t matter nearly as much as the people with whom they are shared.

Jeffrey Turner is the assistant editor at Our State magazine. His most recent story was “Finest Plate in Town” (November 2012).