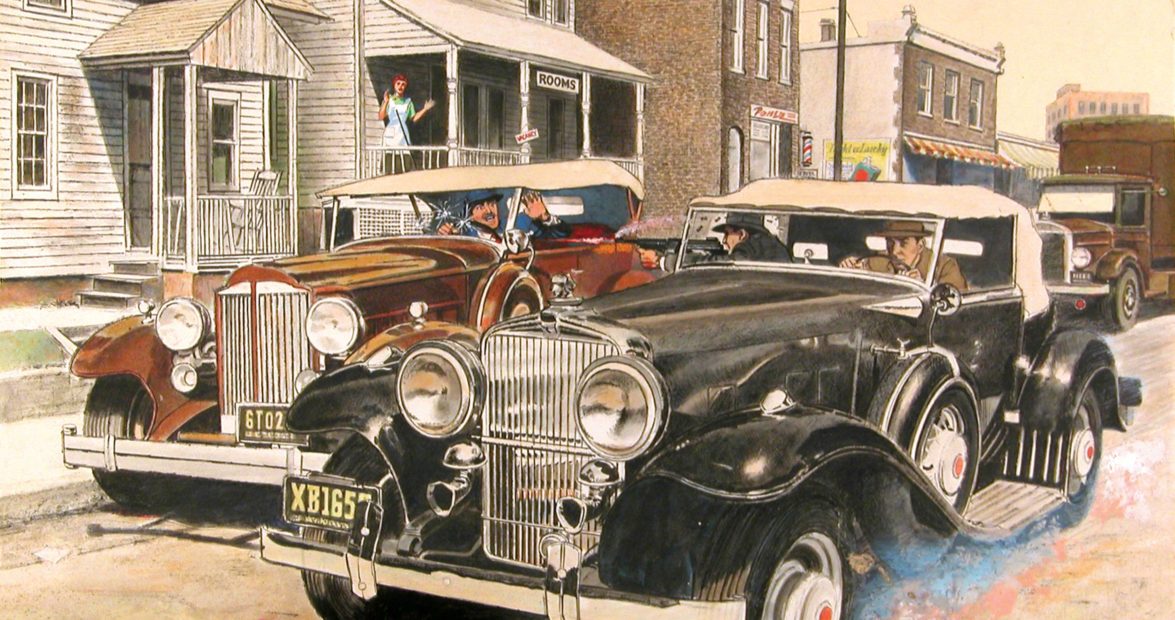 There were twists of fate, like when he slipped a party invite under the apartment door of the girls living upstairs. That was how he met Helen, who would become his wife of more than 50 years.

There were snap decisions, like when a friend suggested they move to New York City. He was only 19 then, but making moves for a long, successful career.

“I make up my mind instantly. I’m not one of those people who deliberate,” Pope says.

With all the quick changes and new ventures, one thing was constant — his love of drawing.

It started with paper-bag doodles, as a kid growing up in the wake of the Great Depression, and carried through to wartime illustrations in the United States Marine Corps, then to national ads during the Mad Men era, and it continues today in the books he churns out about southeastern North Carolina.

Pope, who lives in Shallotte, has spent decades creating characters out of pen strokes, and at 81, has no plans of stopping.

“I think happy human beings have to be doing something. I think the worst thing in the world is boredom,” he says, sipping iced tea at The Winds Resort Beach Club. Pope and his wife built the resort after moving to Ocean Isle Beach 40 years ago. “There were many forks in the road. What would have happened if I had taken even one fork different?”

Pope, born in 1929 in South Carolina, grew up there in Greenville and the Tennessee mountains. He started in the art business as a first grader, when he’d pay five cents for a composition book, fill it with comics, and sell it to a classmate to make enough money for another blank composition book.

He fixated on drawing comics instead of paying attention in class.

A teen during World War II, Pope was his high school newspaper’s cartoonist and got a job as an assistant window decorator for a local department store. He started on his career path early, becoming the store’s advertising manager at 16.

He joined the Marines at 17, the youngest allowed with parental permission.

After Pope finished basic training and a brief stint as head orderly for a commandant, someone passed his drawings to the editors at the Leatherneck, the Marine Corps magazine that dates back to 1917.

Pope moved to Washington, D.C., and drew illustrations for the rest of his two years in the Marines.

After serving, Pope was ready for the advertising industry. He was working as a freelance illustrator back in Greenville, South Carolina, when his friend called and suggested he make the move to the big time.

In New York City, he continued freelance work illustrating advertisements and art for magazine stories, but starting out was rough.

“I was a little fish in a big pond,” he says. “I damn near starved for a while.”

On the night of the big party, the one he unknowingly invited Helen to, the only light in his apartment was candlelight. He had cut the electricity because he had to move after his roommate skipped out on the rent.

Despite being broke, Pope was steadfast. He remained a freelance illustrator, not hitching himself to one agency. Eventually, he built up clients and hired an art rep to help sell his work. His illustrations appeared in magazines, such as The Saturday Evening Post and Reader’s Digest, along with novel covers and textbooks.

The mid-20th century was a heyday for advertising illustrations. Postwar consumerism spread, and in the years before photography dominated ads, drawings of peppy girls and sleek Cadillacs filled magazine pages.

“In those days, all the big agencies were on Madison Avenue,” says Pope, who became the youngest member elected to the Society of Illustrators. “It was a golden age of advertising — at least it certainly was for me. It was for illustrators. There were some illustrators who were almost as popular as movie stars.”

Unwilling to become complacent, Pope jumped into other projects. He started an advertising agency with two friends, a paint-by-number greeting card kit, and a company that consolidated design and visual work for book publishers. It was a busy time, full of cocktail hours and business ventures.

“This is where I want to be”

During his early years in New York City, he spent much of his time with Helen, a copywriter from a well-off New York family.

“Helen was a socialite; her family was in the right clubs,” Pope says. “I was a starving artist. There was something about the bohemian life that really appealed to her. We were about as different as two people could be.”

They married young and spent the next half-century together. Helen died in 2003 after a prolonged battle with Alzheimer’s disease.

It was Helen’s idea to move to North Carolina. It was 1969. They’d spent a couple of decades living in New York and Connecticut with their two children, when they took a trip to a family reunion at the beach. Ankle-deep in the water, Helen declared she wanted to move to Ocean Isle Beach, which at the time was little more than a remote stretch of sand.

“Miller, this is where I want to be,” she told him.

The Pope family bought property that year and moved south six years later, after they’d built four units on it to rent out when they weren’t there. They dubbed it The Four Winds, the first of several Winds properties that led to the current hotel resort.

Ocean Isle Beach was a far different place then than the collage of million-dollar beach homes and businesses that make up the town today.

“I’m leaving this party life and going to an island that has probably a dozen houses on it,” Pope recalls. “There were interesting people from other places. We’d meet people from all over. It was a very happy existence.”

After they moved to Ocean Isle Beach, the couple became increasingly involved in the community.

“Helen became the fiercest North Carolina partisan you’d ever met,” he says of his wife, who hailed from Scarsdale, New York. “She loved North Carolina, the people. She loved the beach.”

The couple met with state tourism officials and pushed to get the road to Ocean Isle Beach included on the state’s official road map. They organized golf trips for New York illustrators and cartoonists, constantly promoting the area.

“Nobody had ever heard about this part of North Carolina. It was unknown,” says Pope, who was still doing freelance illustrations at the time.

He bought into a land deal with friends for 700 acres of dense woods along the Intracoastal Waterway around Sunset Beach. He had 24 hours to make the decision, and he had never even seen the property. But that, too, panned out, evolving into the sprawling Sea Trail Golf Resort and Convention Center.

Today, Pope’s children run The Winds, while Pope narrows his attention down to just the projects he finds most interesting.

In 2009, he wrote an autobiography, Confessions of a Madman, chronicling his life from Appalachian Tennessee to Madison Avenue to coastal North Carolina.

A modest man who no longer cares about chasing money or accolades, Pope says he wrote the book simply because he wanted to.

“I just wanted my grandchildren to know what an unusual life I had,” he says of his autobiography. “There’s a novel in every person. Everybody has a story. I’m not unique in that.”

“I hope it’s got some Raymond Chandler in it,” he says. “I don’t know if anybody’s going to be interested in it. If I wasn’t creating something, I’d go crazy. I’m happiest when I’m drawing, but now I find writing creative.”

Jacqueline DeGroot, a writer in Sunset Beach and one of Pope’s closest friends, has collaborated on several books with him. One of the most interesting things about Pope’s work is that it continues to evolve, she says.

Pope, never satisfied settling on one medium for his illustrations, now does much of his drawing on his computer.

“He is constantly teaching himself,” says DeGroot, who has known Pope since the mid-1970s. “He has learned unbelievably complicated software just by doing or using it. He didn’t read manuals. He didn’t go to a seminar. He’s like a kid with a toy when something new comes out. He paints beautifully on the computer.”

In recent years, Pope has worked on a handful of books on topics ranging from local history to pirates, and he has several more ideas pending.

“I’m into producing books, even if nobody reads them,” he says. “I have found what I love to do. I could never fully retire. I’ve been extraordinarily lucky. I was lucky in meeting Helen. When you look back in a long life, you think about the turns in the road, all the little things that could have happened and by chance — it’s all luck. That, and I’ve never been afraid to try something.”

Visit millerpope.com to learn more about Miller Pope’s books and illustrations and view a gallery of his work.