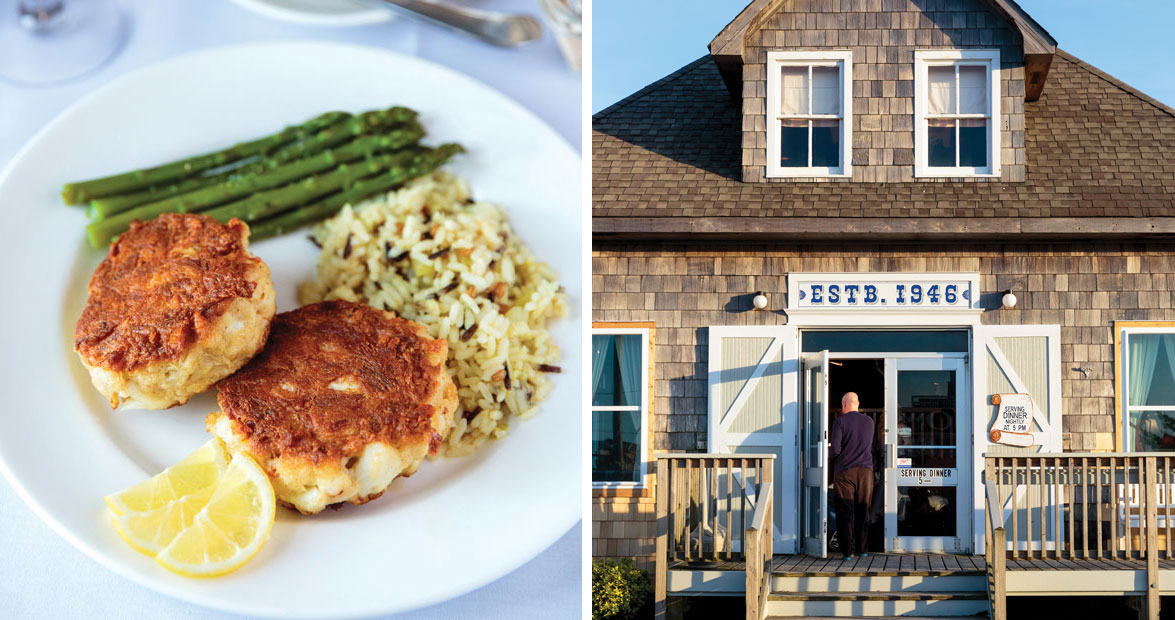 Peaches Eckhardt and her mother, Clara Mae Shannon, had been up all night frosting petit fours for Her Royal Highness Princess Anne, who was in Manteo for the hoopla surrounding the 400th anniversary of the Lost Colony.

The soupy heat on that July morning in 1984 was sure to doom the icing, so Peaches’s father, Lionel, hired a refrigerated dairy truck to ferry the desserts to the garden party. The driver balked at securing everything inside, and, no surprise, Lionel got a desperate call soon after: The driver was in a ditch, and the little cakes were ruined. “I burst into tears,” Clara Mae says. “We must have bought up all the desserts we could find in Manteo — grocery stores, gas stations.” 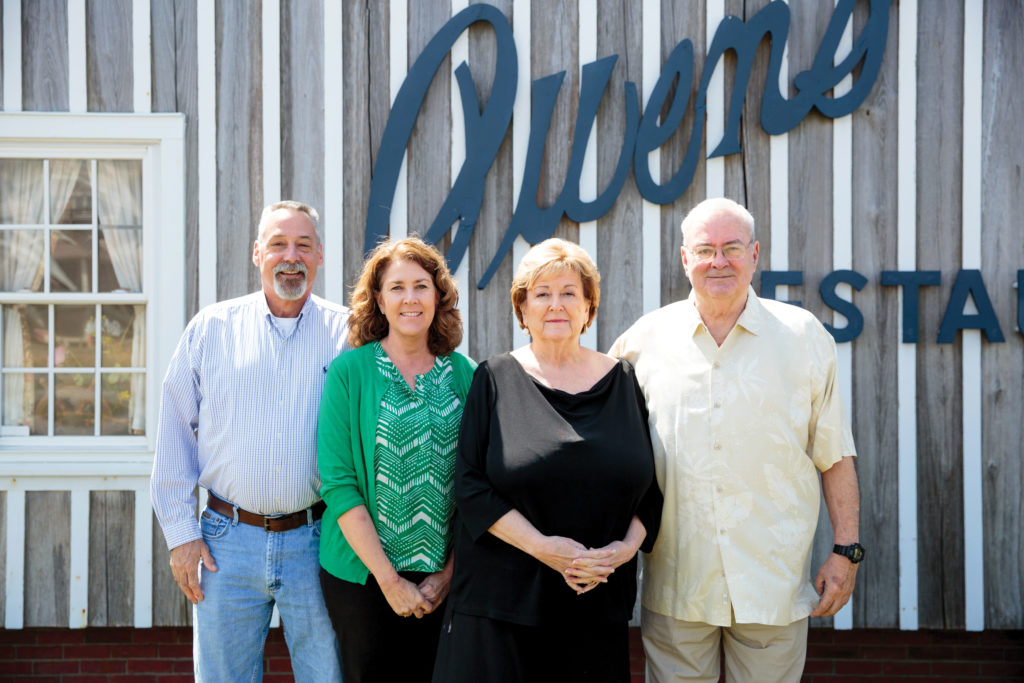 From left: Jim and Peaches Eckhardt and Clara Mae and Lionel Shannon are keepers of Miss O’s legacy. photograph by Anna Routh Barzin

That’s called knowing “how to cope,” she says, a vital trait passed down by her parents, Clara and Robert Owens, who opened their namesake restaurant in 1946, when the Outer Banks weren’t much more than wild dunes, charter boats, and restless Coast Guard men. Now, a memento of the tragic Lost Cakes — in the form of a Twinings British tea tin — is tucked among the oyster plates and maritime tchotchkes that adorn Owens’ Restaurant. A reminder that, “If you think you’ve got the restaurant business figured out, you’re in for a rude awakening,” Clara Mae laughs. “It’s a humbling experience.”

Clara Mae’s mother, the indefatigable Clara — always Miss O — was barely five feet tall and ran her one-room restaurant with shipshape efficiency. Grits and eggs at dawn for the fishermen gave way to a lunchtime crowd. In the thick of the dinner rush, the dining room filled with the smells of fish on the flame and hush puppies bubbling in oil. Cigarette smoke swirled in the high laughter. The eating, drinking, gabbing — and, on the really late nights, wee-hours singing — continued untamed until Miss O flicked off the lights. 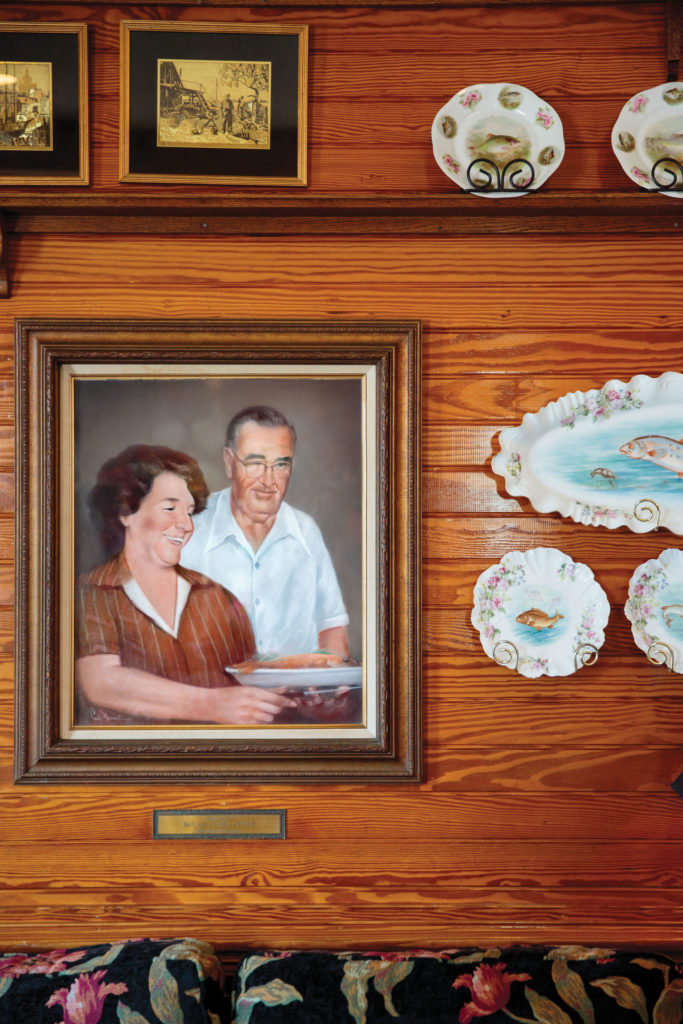 Clara “Miss O” and Robert Owens built a family tradition for generations at their restaurant in Nags Head. Each night during the summer, some 500 diners come for the seafood and the social scene.

As Clara Mae and her brother, Bobby, got older, they kept pace with their mother, washing silverware, serving, and scraping plates. Their father had died suddenly in 1950, four years after swapping their successful Manteo hot dog stand for a new, risky venture on the then-hardscrabble Outer Banks. Back in those days, running a restaurant alone, and as a single mother, on a strip of sand that wouldn’t become an incorporated town for another 11 years, inured Miss O to pessimism. “Tomorrow the sun’ll rise,” she’d tell anyone with a complaint.

“She would give anyone a meal who needed it,” says her granddaughter Peaches. “Many times she didn’t have one to spare.” Not that she was just a softy. She was clever and tough, too: Miss O had a regular poker night in Manteo, and while she cleaned the table in Texas Hold ’Em, 8-year-old Peaches would play with the little dogs underfoot.

Clara Mae inherited her mother’s spirit — she liked to go dancing after hours — and her generosity. Lionel tells the story of a night in the early 1980s when a couple came in and said they couldn’t find a room anywhere. The beach was full. Clara Mae offered them a room in their cottage, no charge. “About two months later, we got a big envelope in the mail from the guy, who turned out to be the Speaker of the House in Ohio,” Lionel says. “He had them pass a declaration — something about taking care of a wayward stranger — and he sent it to her.”

A family of characters on an island of characters, the Owenses’ place in Outer Banks history was sealed by Miss O’s cooking. “The recipes just existed within her,” Clara Mae says. “She didn’t measure anything. She’d say, ‘Oh, a handful of this and that.’ But our hands were totally different. She had these little hands.”

Breakfast and lunch faded away in the 1970s, but the dinner menu remains a time capsule of beloved seafood classics. For a brief time, “Oysters Owens” was cut from the roster when early-season oysters were scarce, and the local stuffed flounder was bumped, too. Miffed customers demanded their return. “Some people just really, really don’t want change,” Peaches says. “You have to walk a fine line.” Of course Miss O never stopped making her signature dishes: crab cakes and hush puppies. Even when she was confined to a wheelchair, she still came in to cook. The morning she passed away — two years after Princess Anne’s visit — she was making a batch of both in the kitchen with Lionel.

Regulars tend to mill around the dining room between courses, swapping news. Marriages, babies, joys, and sorrows — it’s all out in the open on any given evening. One night a woman nearly gave birth in the dining room. And there was the time a man’s marriage proposal went awry. (It happened in the alcove booth where Andy Griffith liked to eat his flounder in peace.)

“Oh, he got down on one knee,” Lionel says, wagging his head. “Made a real show of it.”

“When she said no, half the restaurant was practically crying,” Clara Mae says.

Miss O didn’t set out to create a place to commemorate milestones, but that’s just what has happened. For a long time, it was the only go-to for cloth-napkin dining. Even as that tide has shifted, the pull of nostalgia is stronger than any foodie trend. So much local family history — from early homesteaders to Coast Guard culture and fishing families — is enshrined here that people feel a sense of belonging when they walk through the door. There are two Lyle guns in the lobby, small cannons used to shoot lifelines over the water to a sinking ship, and a century-old compass. The oil lamps, carried from one Coast Guard station to the next, are near the logbooks that give an itemized account of daily life on these eastern outskirts.

In one of the glass cases there’s a photo, dated 1884, of Patrick Ethridge, a scraggly-bearded Coast Guard rescuer. Generations of his offspring have worked at Owens’. Passing by his picture for the first time, they invariably gasp. “Oh, look!” they’ll say. “There’s Great-Great-Great-Granddaddy Pat.”

Because Clara Mae, Lionel, and their extended family have spent more waking hours inside Owens’ than outside of it, a kinship has formed between the family and everyone who works with them. There were the cooks — the “Matriarchs from Manteo,” as Peaches calls them — whom Miss O and Bobby picked up in the morning and drove home each night. James Earl Sawyer — everyone called him Chief — worked at the restaurant for 50 years. Peaches remembers going to his funeral and being told at the church door that the Owenses were to sit up front — with the family. “A high honor,” she says.

Now Don Jackson acts as Clara Mae’s right hand. He’s worked at the restaurant for 21 years, and is a singer of local renown. In fact, when he’s not at Owens’, he’s likely at a wedding or funeral. “He buries everyone in three counties!” Lionel crows.

The bookkeeper, who has worked upstairs for more than 35 years, tells the family, “This is your home.” Clara Mae agrees: “And it really is.” What Miss O put into motion with her crab cakes and steely pluck has become a way of life for four generations, and a lineage landmark for the island. Her daughter knows, though, what would have made her mother most proud: “She was happiest when we were all together in one little room.”