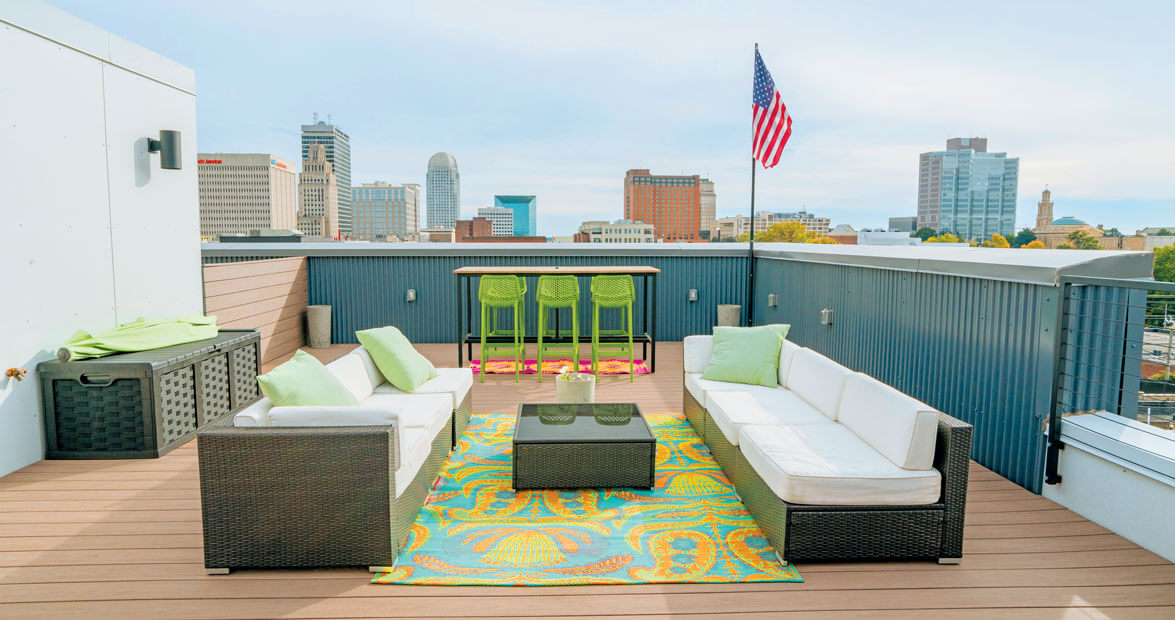 In the early 1900s, great artists and architects like Ludwig Mies van der Rohe and Walter Gropius refined ideas that would revolutionize the architectural landscape. At the German Bauhaus, or “building house,” designers learned by building, creating total works of art — from concept to bricks and mortar. They celebrated the function of forms, the usefulness of light and direction. They strummed the notes that became the anthems of modern design, sung to unique tunes by today’s great modernists.

In the 1980s, Adam Sebastian had never heard of Bauhaus or modernism. He was just a child growing up in the Forsyth County town of Lewisville. He didn’t know about architecture, but he knew how supple newly fallen pine branches could be, how they could bend and be used for forts in the field behind his house. He knew how oak limbs could be propped for teepees and how dry leaves made for soft floors. He saw how tobacco barns opened to the breeze but kept the golden leaves dry. Sebastian, the king of his own forts and tree houses, already understood the ideas that he would later learn as an architecture student at NC State University, studying under professor Frank Harmon.

“Having that ability to create things at an early age and physically build them — that element of curiosity and wonder that I was able to explore as a kid growing up in Lewisville — is the root of my getting excited about architecture,” he says. “I was really excited about being able to design and build something that someone could physically interact with, that they could actually sleep in.”

Now, Sebastian sleeps in his firm’s own design, in the NoTra Building in downtown Winston-Salem, with his wife, Anna, and their two children, Leah and Conrad. From their condo’s south windows, he can see one of his first projects, the Art for Art’s Sake Center for the Arts, which now houses his architecture firm, STITCH Design Shop. 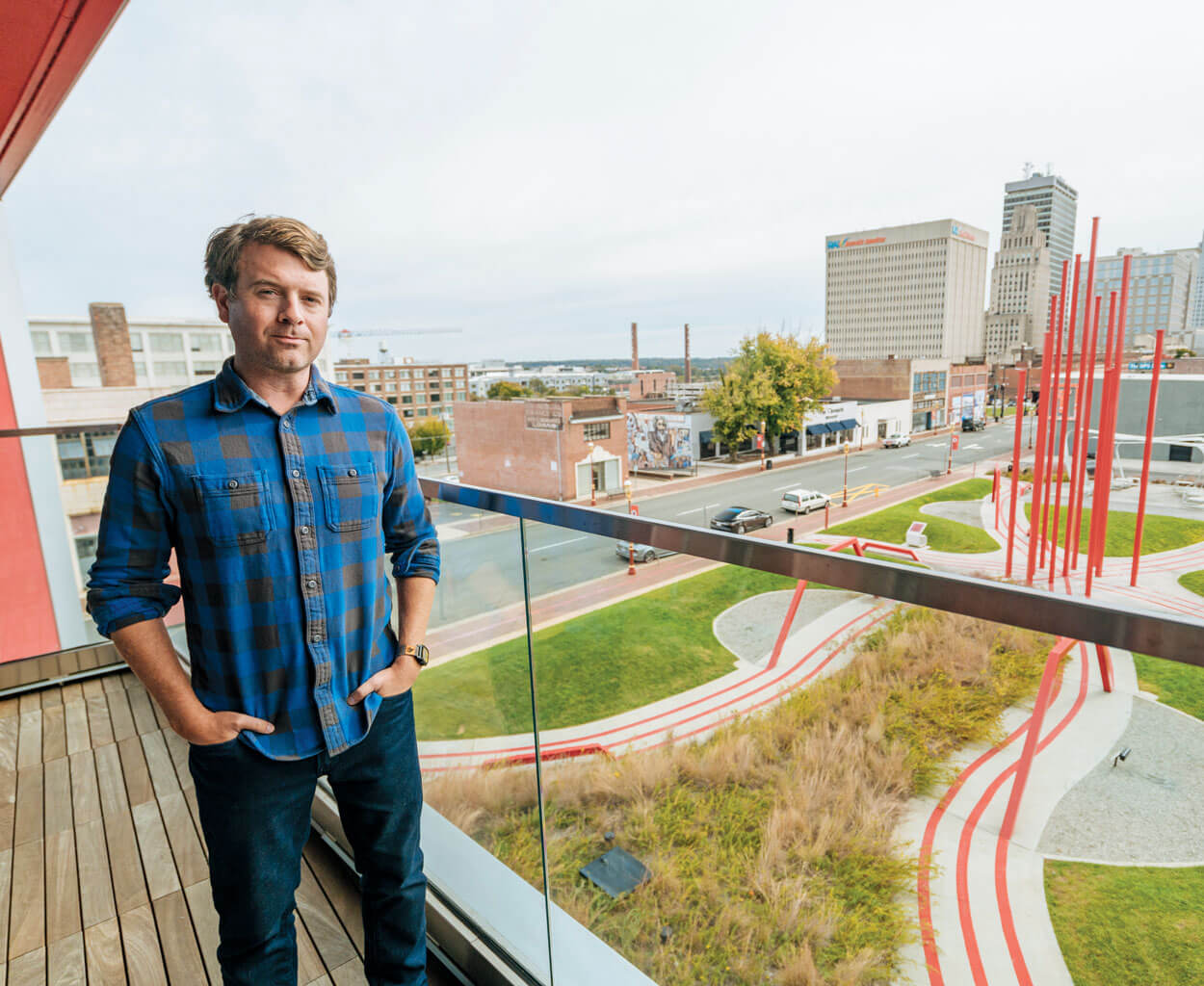 From his Winston-Salem office deck, Sebastian has one of the city’s best views of ARTivity on the Green. photograph by Adam Mowery

When everything looks the same, the community loses its identity.

After graduating from school, Sebastian came home to Forsyth County energized by the ideas he’s carried with him since childhood. When he looked around Winston-Salem, he saw block after block of the traditional buildings typicaly of old tobacco towns. Sebastian knew that the buildings were hiding part of the city’s identity. He knew that the people who lived inside them brimmed with artistic ideas.

When everything looks the same, the community loses its identity. “Sure, Winston is a very traditional city, but it’s called the City of Arts and Innovation,” he says. “People were yearning for something new.”

Sebastian eventually partnered with architects Ben Schwab and Pete Fala to form STITCH, which gave the trio the platform they needed to help enrich the landscape, to reveal the artistic innovation hidden in Winston-Salem’s core. They designed Bailey Park, transforming land near an old R.J. Reynolds power plant into a public place where people lounge on green space as music rises from the amphitheater and bounces off the old tobacco buildings and smokestacks nearby. They designed the AFAS Center for the Arts, a boxy building whose giant windows make it glow like a lantern at night, and the adjacent park, ARTivity on the Green. And they design homes for modernist enthusiasts, too. 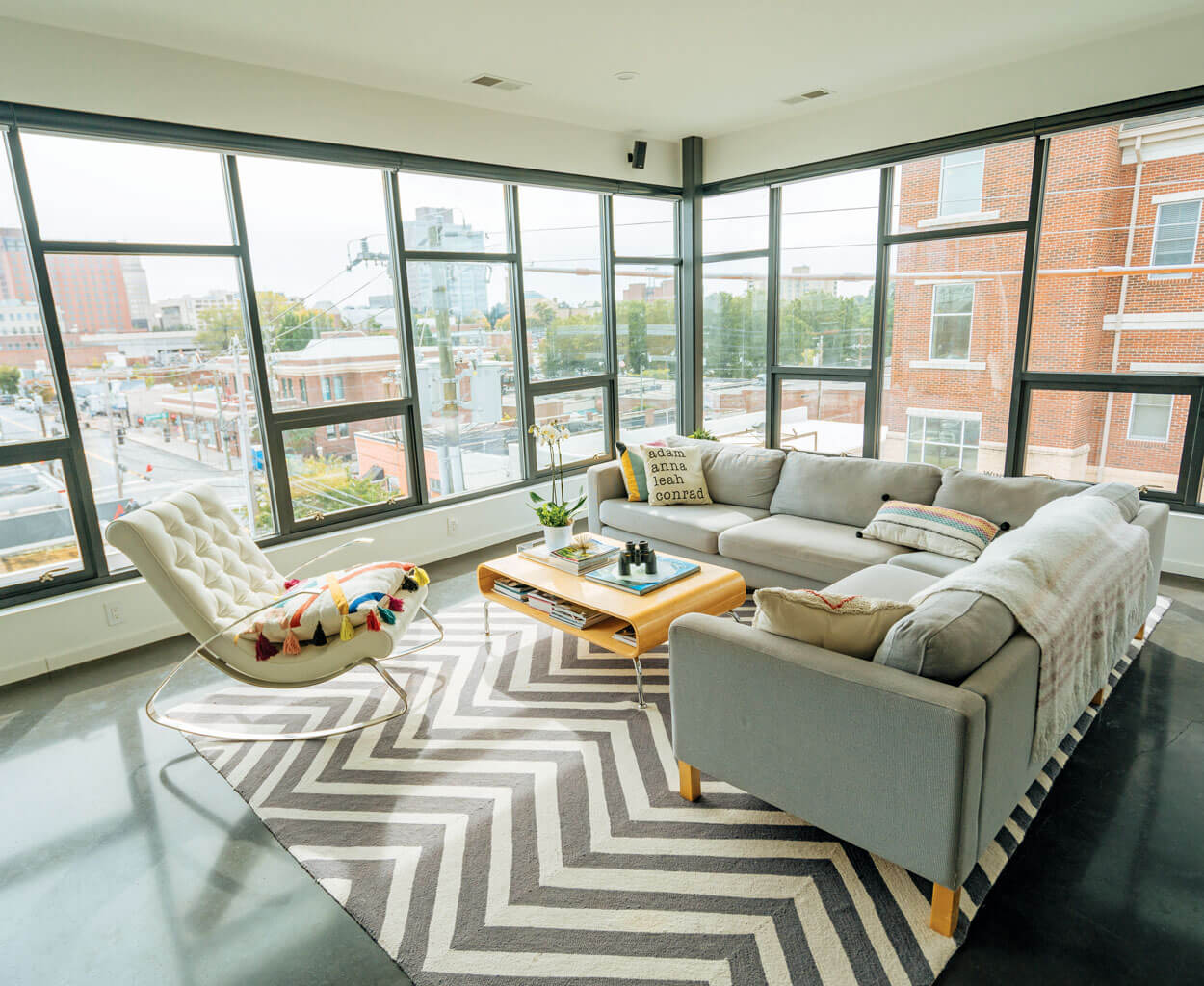 The condo’s open floor plan creates a living area that is simple and refined. photograph by Adam Mowery

They position each house to capture the light and warmth its resident needs — elements of a basic, well-designed home that are rooted in a simple understanding of the site. Like the builders of local tobacco barns, who drew inspiration from the natural world, Sebastian places homes so that they’ll work in concert with the earth.

Their home is their tree house, high above Winston-Salem.

Sebastian’s own home also thoughtfully incorporates modernist ideas. Concrete floors retain heat; the living, dining, and kitchen spaces flow into one another, which means that Conrad can zoom his hoverboard freely about the house. Leah and Conrad’s bedrooms face north, where they can see the woods where their father grew up in the foothills of the Sauratown Mountains. Their parents’ bedroom faces south, toward downtown, where Sebastian can watch his ideas sprout from bricks and beams and ripple across his town. 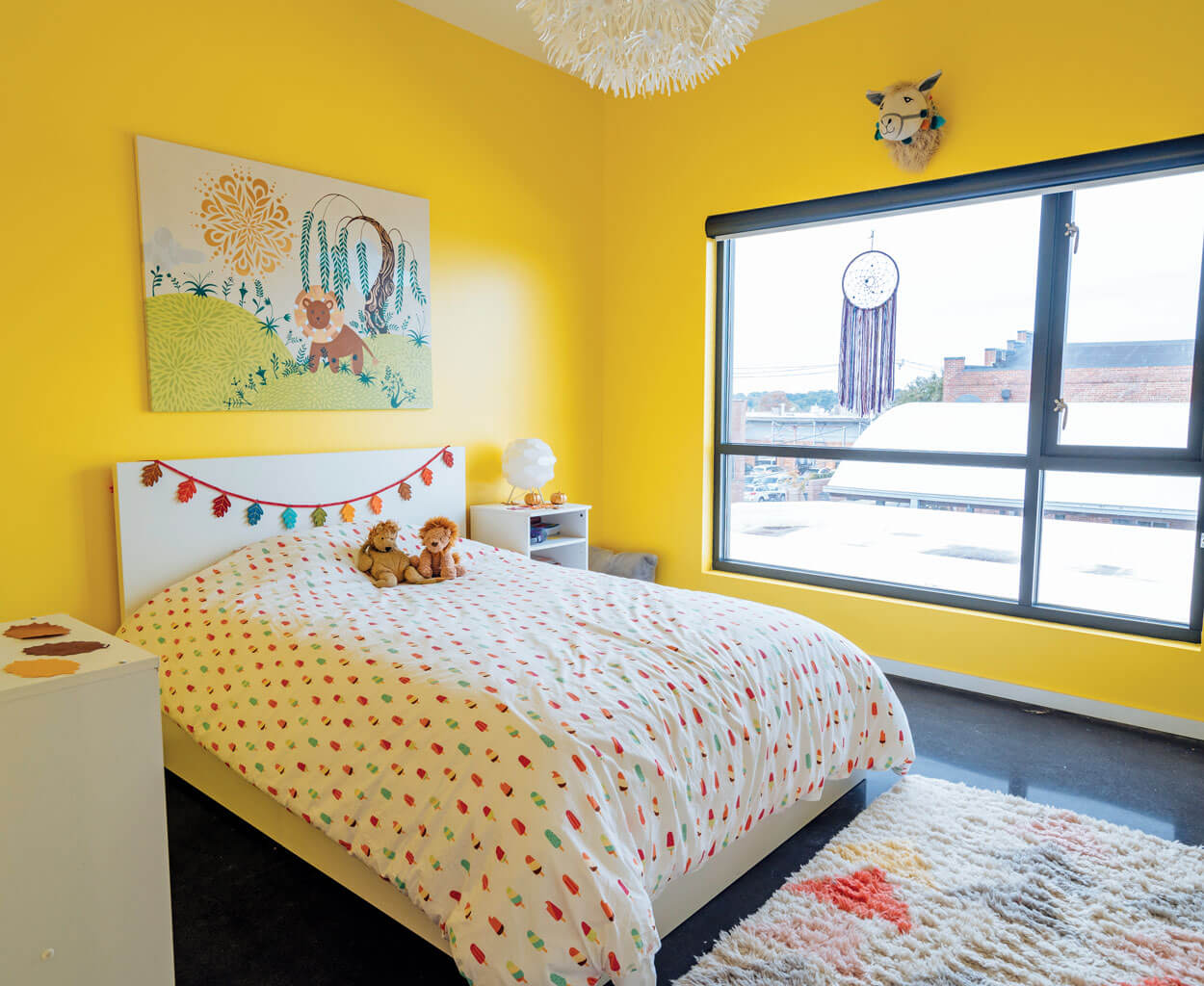 Large windows in Sebastian’s daughter’s room provide a view to the north that includes Pilot Mountain and Hanging Rock. photograph by Adam Mowery

Their home is their tree house, high above Winston-Salem, itself one of the highest points in Forsyth County.

They have a rooftop deck for camping, for stargazing, for cooking out, and for telling each other stories while being hugged by the foothills and the city that Sebastian is helping build.