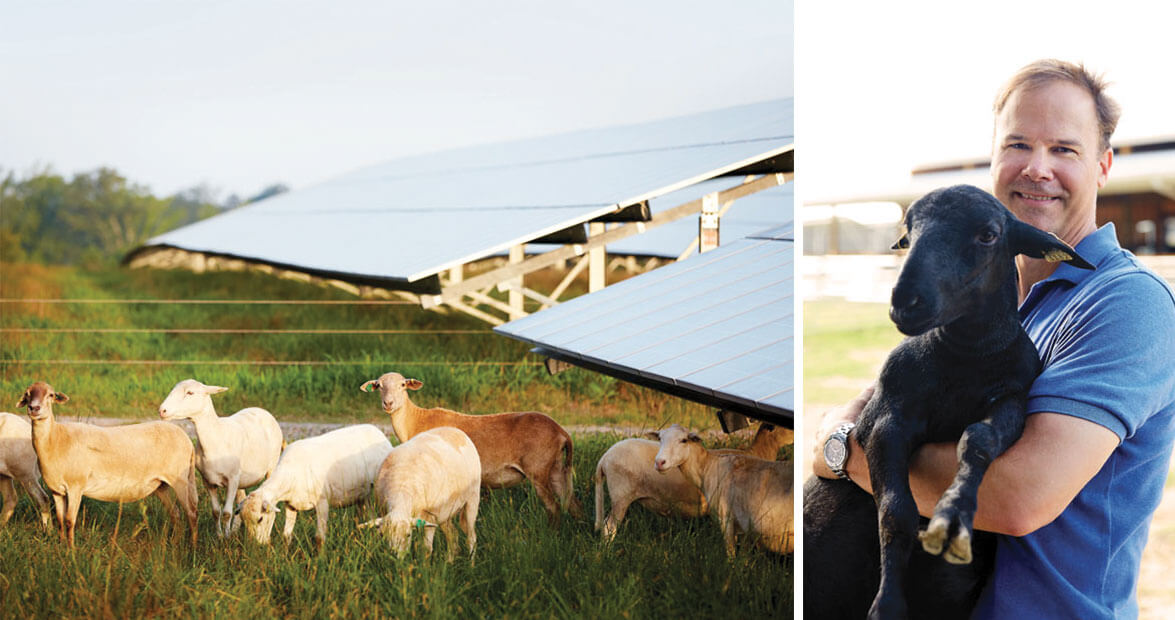 Joel Olsen had a problem with his grass. The vegetation under the panels on one of his North Carolina solar farms was unstoppable, growing four inches a day in the summer. It was 2012, and his three-year-old energy company, O2 emc, was issuing check after check to guys with lawn mowers.

Then, a 10th-generation farmer named Chad Ray reached out with an idea: He and Olsen had talked about how sheep were used on solar farms in Europe to keep grass in check more economically — would Olsen be interested in experimenting?

Olsen became the enthusiastic first customer of the ground-maintenance company that Ray cofounded, Sun-Raised Farms, which uses sheep from local farmers to keep grass and weeds from getting out of hand and covering solar panels. But within two weeks, all 13 sheep placed on the farm had died, victims of the neighbor’s hunting dog.

The tragic beginning was not enough to deter Olsen, who saw the brilliance of the combination of sheep and solar power. He started redesigning his solar farms specifically with pasture animals in mind, using what he’d learned to create a new 220-acre — and impenetrably fenced — operation called Montgomery Sheep Farm in Biscoe.

Now, the farm is one of a dozen in North Carolina that provide local lamb to Sun-Raised Foods, an offshoot of Sun-Raised Farms. Meanwhile, Sun-Raised Farms manages the vegetation on more than a thousand acres of solar farms, including Olsen’s, where his own herd takes care of the grass and weeds and adds to the soil’s fertility, recycling the vegetation so that the land doesn’t need to be stripped or sprayed.

“It’s the dual use of agriculture and clean energy that amazed me,” says Brooks Mixon, a ground-maintenance supervisor for Sun-Raised Farms who has known Olsen since junior high school. “Aside from the need and desire for clean energy, it really is a way to keep people in rural areas in agriculture.”

That’s because the model gives the farmers who provide the sheep a way to expand their acreage and continue their way of life. It creates a symbiosis that not only benefits the solar companies, the community, and the environment, but also gives new purpose to land that has lost its mojo. 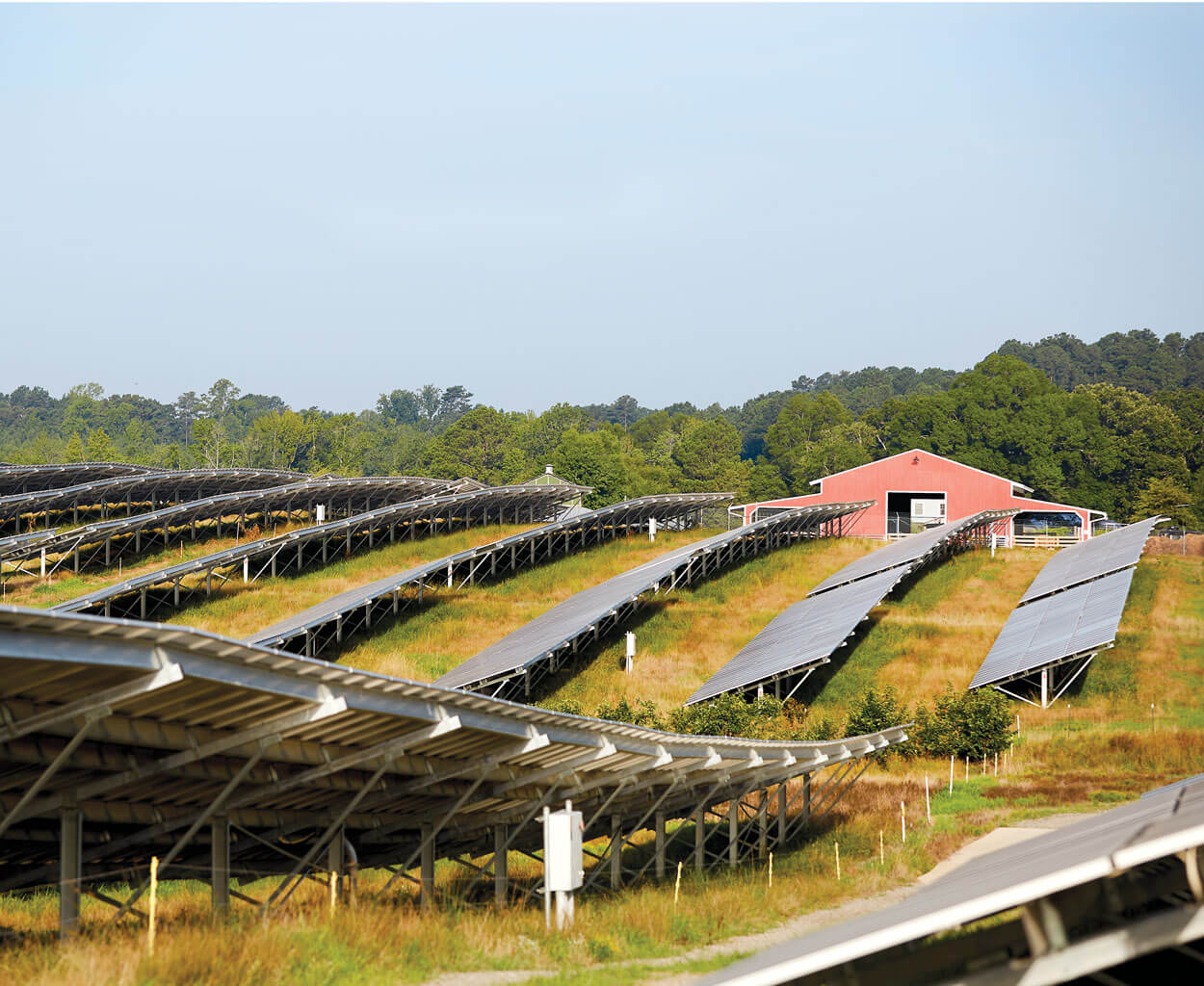 Sheep keep the grass from growing up over the property’s 106,000 solar panels. photograph by Stacey Van Berkel

On Montgomery Sheep Farm, there are two things that matter: sun and shade. The sun pours into 106,000 panels that turn solar energy into electricity, while more than 500 Katahdin and Dorper sheep happily munch the light-loving Bermuda and crabgrass.

But the shade is the secret sauce. The areas under the solar panels are microclimates that allow different varieties of native vegetation, like clover, fescue, and rye, to flourish. Under each awning, the vegetation is cooler, richer in nutrients. Here, sheep find respite from the weather — and consequently feel less stressed. It’s a difference you can taste, Olsen says: The lamb is healthier for us thanks to a free and mobile lifestyle.

“Aside from the need and desire for clean energy, it really is a way to keep people in rural areas in agriculture.”

Today, Olsen is extolling the virtues of lamb pasture-raised on solar farms to chefs and servers from the farm-to-table restaurant Elliott’s on Linden in Pinehurst. Though most of the lamb raised on Montgomery Sheep Farm is sold through a distributor, Olsen also works directly with restaurants like Elliott’s that make eating local their ethos. Over samples of thin-sliced spicy lamb sopressata and mild lamb salami Milano, he encourages the staff to highlight the story behind the supper.

“One of our mantras is ‘Know thy food,’” says Hannah Hill, Elliott’s marketing specialist. “We like to educate our patrons on the bounty of things available in North Carolina.”

Olsen says that Sun-Raised Foods is just scratching the surface of the market for lamb in the state. North Carolinians don’t eat much of the meat, but most of what we do buy is imported from Australia and New Zealand. Olsen and his collaborators at Sun-Raised Farms want to change that. They see the movement that Montgomery Sheep Farm has become a part of as a possible model for other farming families. In addition to saving money on power — Montgomery Sheep Farm is now one of the first American farms to be completely off the grid — Olsen brings in revenue by offering overnight farm stays, retreat space, special events, and cooking classes.

“I think it’s great just to generate clean energy,” Olsen says. But the ways he has found to add revenue “can really be a beacon for what can be done in these rural areas, to attract visitors, to attract income. It’s pretty elegant in its simplicity.”