An Appalachian breeze rustles the ginkgo leaves outside The Market Place as Chef William Dissen steps out of the restaurant and into the dewy spring morning. A forager carrying an armful of ramps walks up the cobblestone street to present his pungent bouquet to Dissen, who will transform the wild plants into vibrant dishes that delight Asheville locals and visitors. 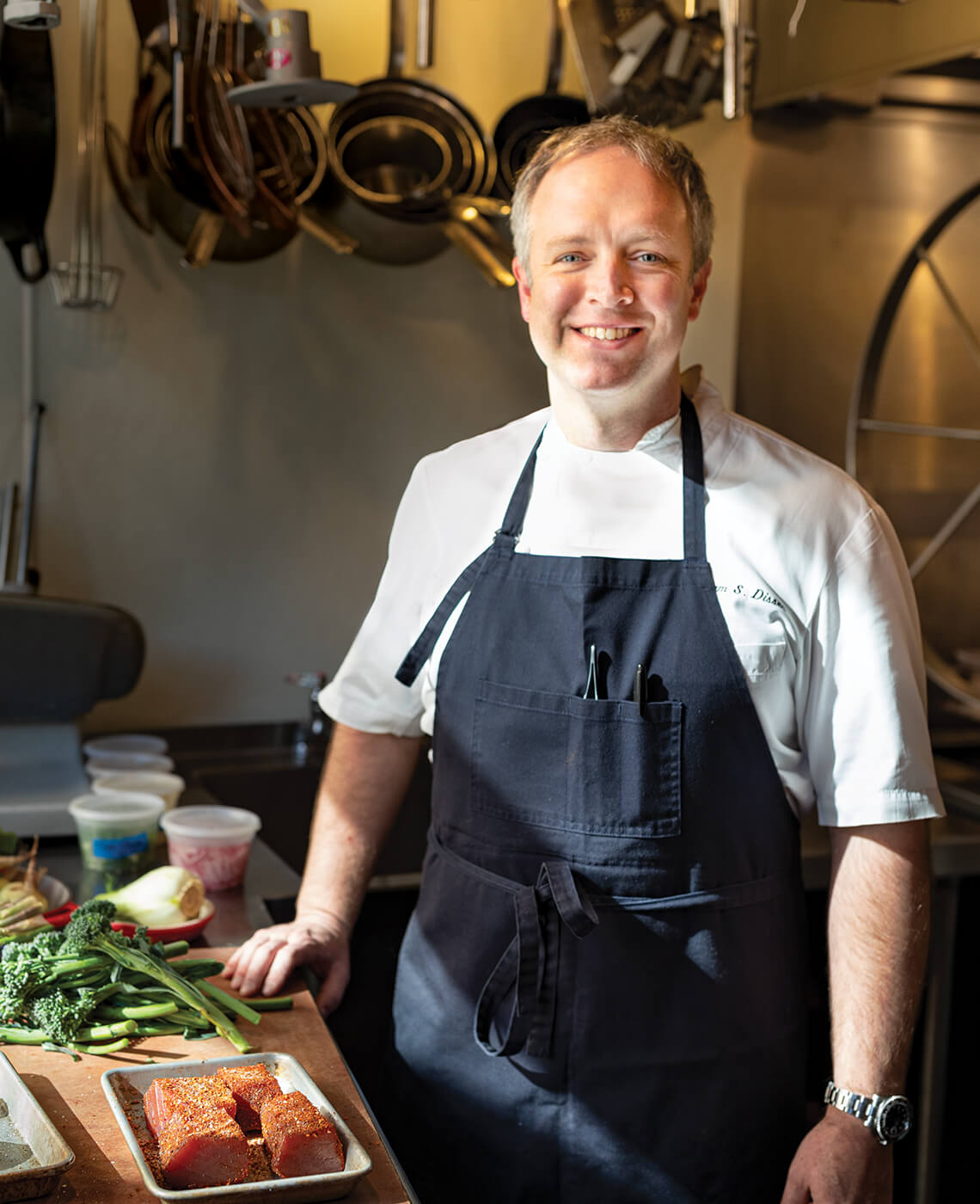 Dissen has collaborated with this forager for years, trusting him to deliver sustainably harvested ramps and mushrooms to his kitchen. These relationships between chef and purveyor are the lifeblood of The Market Place, which has been serving seasonal, locally sourced fare for more than 40 years — decades before farm-to-table was a buzzword.

In 2009, when he purchased The Market Place from Asheville’s local food pioneer Mark Rosenstein, Dissen carried on the restaurant’s commitment to local sourcing, but he also had a vision for something new. White tablecloths and fine-dining flourishes faded into the background in favor of a more casual dining style and meals that reflect his Appalachian roots.

Dissen is a West Virginia native whose culinary passions were ignited in his grandparents’ three-acre garden, although he didn’t realize it at the time. Their canning shed, with its dirt floor and rows of dusty jars, was his first exposure to the art of food preservation. Memories of shucking corn on the front porch, playing hide-and-seek in the root cellar, and foraging for mushrooms with his grandfather became inspirations for Dissen’s version of The Market Place. “I wanted to explore that story and that connectivity I found reminiscing about my grandparents and the life they led — preserving not only food, but also culture,” he says. 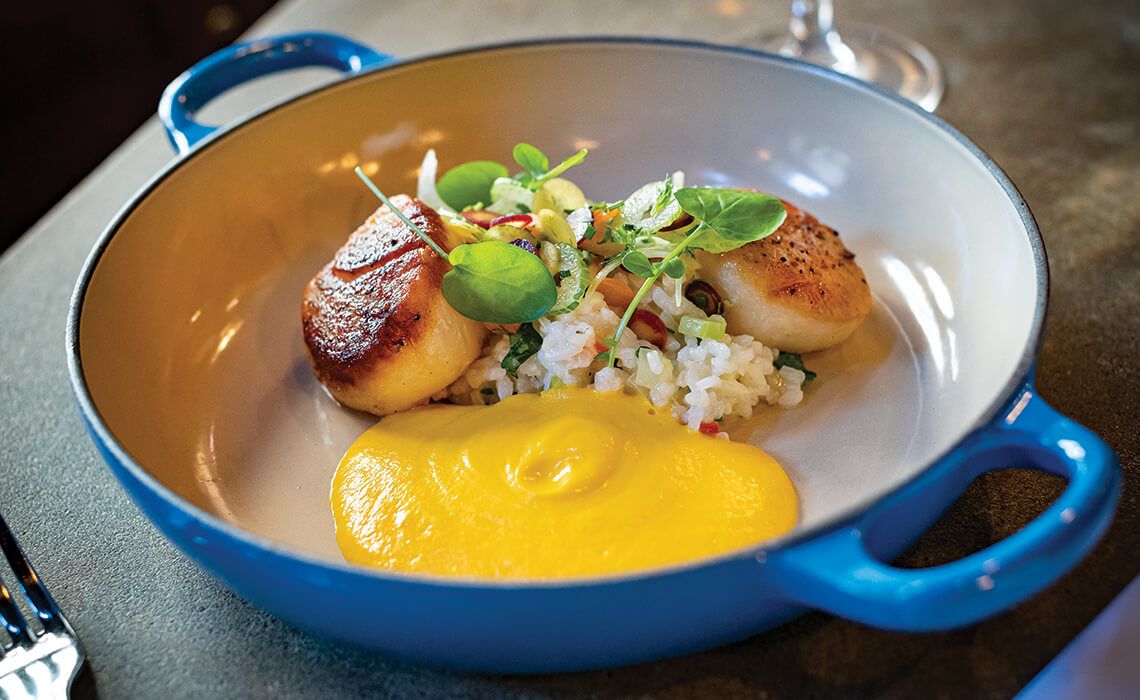 Dissen captures the rhythms of agrarian life on the menu, which evolves alongside subtle shifts in the seasons. Ramps kick off spring, lending their unforgettable aroma to ramp kimchi fermented with house-made chili paste. When summer sweeps in, a farmer stops by with Zephyr squashes, some with delicate blossoms still attached and ready to be stuffed. Autumn’s chill brings sweet potato mole that crowns heritage pork shoulder and creamed greens.

Dissen was one of the first chefs in the area to spend Saturday mornings shopping at farmers markets and hauling produce back to the restaurant. Later, he convinced somewhat skeptical farmers to deliver directly to him, and that model of local sourcing swept through the restaurant community.

Now, he collaborates with farmers before they even till their fields. At the beginning of each year, he sits down with local growers to flip through seed catalogs and create a plan for what he’d like to buy in the coming months. They weigh the virtues of different varieties and sizes, zeroing in on vegetables that grow well in the farmers’ microclimates and deliver outstanding flavor. “That was a turning point for me as a chef,” Dissen says. “I can plan the seasons even better as to what I’m going to put on the menu and on the table.” 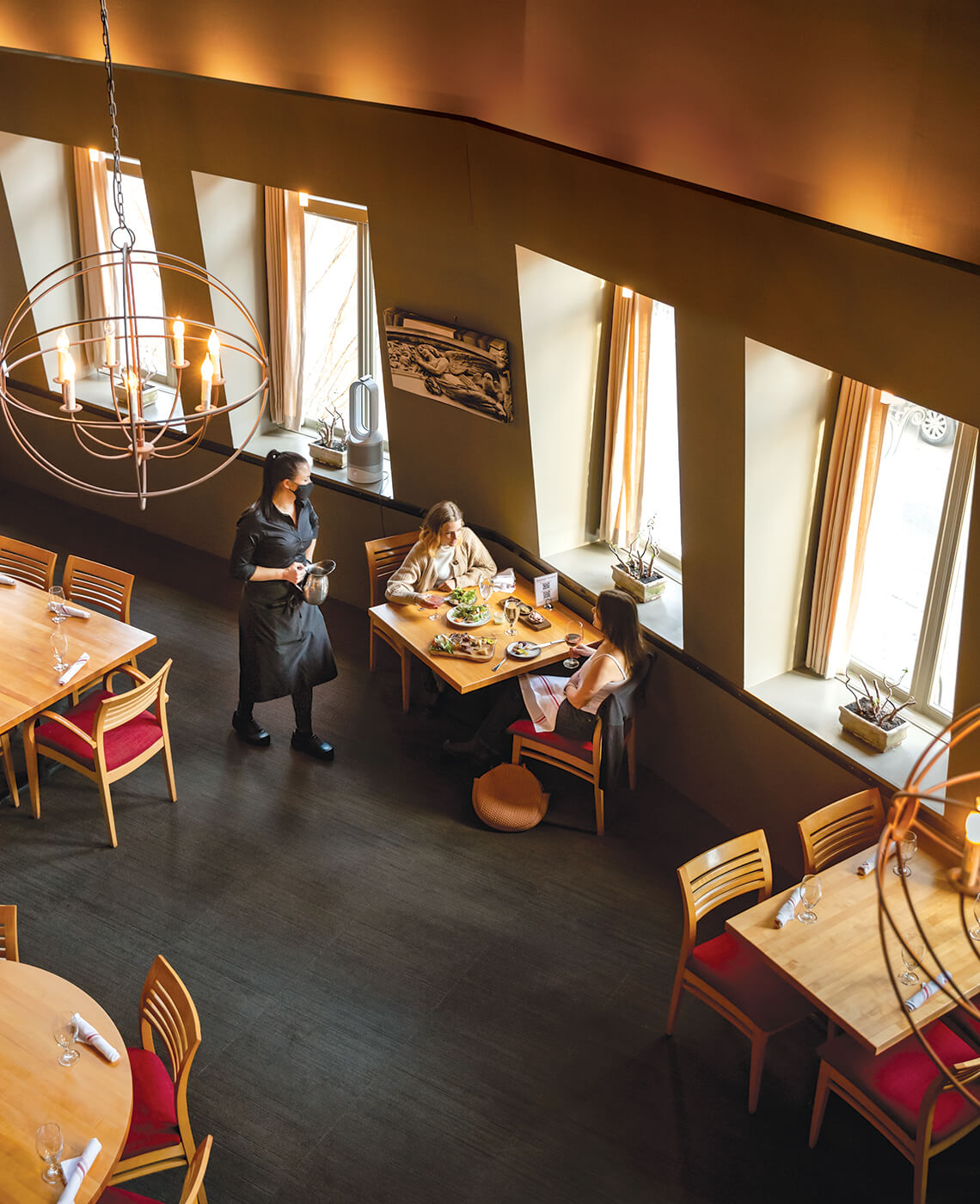 Venturing into the forests of Appalachia has been a source of inspiration for Dissen since his grandfather took him foraging as a child. Back then, they walked the woods near the family farm, eyes on the ground, searching for ginseng, mushrooms, medicinal herbs, and ramps. His grandfather taught him how to spy a patch of ramps in the woods and how to harvest them sustainably, and his grandmother showed him how to transform the alliums into spring meals.

Decades later, Dissen is still in awe of the forest floor. He sought solace in the woods during the early days of the pandemic. The ramps were as dependable as ever, a reminder that the mountains will provide even when humanity is in turmoil. Each spring, ramps will push through the soil again, and Dissen will share the bounty.