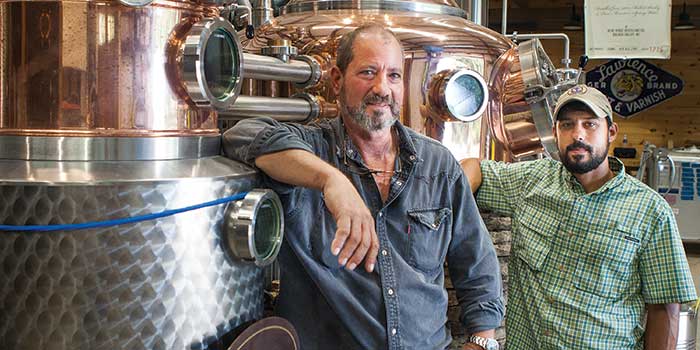 People call this place Golden Valley. The land here dips and settles, surrounded by mountains that jut up for a few hundred miles. It’s a lush land with gushing creeks, berry bushes, clover green fields, and immense oaks and maples.

The land remains unspoiled, nearly untouched. The Blue Ridge Distilling Company lies at the base of the mountains, right before the earth builds on itself again and climbs to the sky. Two dogs, a chocolate Lab named Ridge and a mixed breed with tan fur named Barley, chase rabbits in the meadow.

When Tim Ferris chose this location 20 miles south of Morganton, he knew it was the place for his business when he realized it was the valley. He knew that, to find the goodness, the perfection, you look not toward the top, but to the still and quiet bottom.

It could be argued that the history of whisky and spirits in North Carolina has played as important a role for Tar Heels as tobacco or textiles or music. North Carolinians patronized hundreds of taprooms as early as the 1600s, and while lawmakers prohibited public drunkenness, they ruled that people could make whisky and sell it. By the mid-1800s, whisky played an important role in western North Carolina’s economy. Farmers figured out that corn took up too much space on trains, so they fermented and distilled it into corn liquor. They took their product to Statesville, which transformed into the shipping point for whisky distribution; at one point, at least 450 distilleries shipped their whisky through the town.

Now, 94 years after Prohibition blacklisted moonshiners and whisky makers, 13 companies are distilling again and selling their products — gin, rum, vodka, apple brandy, honey liqueur, whisky — across the state. But none of the companies are making a product quite like Blue Ridge Distilling.

Ferris, a Connecticut native, moved to Golden Valley in high school. He always enjoyed carpentry and plumbing and welding, but never could settle on one path. Then he found a career that combined all those things: diving. That, and his coastal heritage, pulled him back to the water. Ferris earned his recreational diving certification at 21, his commercial diving certification at 25, and spent the next 12 years diving for a living.

He says he always wanted to start a distillery, to combine water and a product of the land and convert the single parts into a smooth spirit. “This is a creation that has had such an effect on mankind,” Ferris says. “And I wanted to be a part of that.”

But he didn’t have the time. He spent most of the year in a tank 500 feet below the sea. On some jobs, Bob Weihe was alongside him, the eldest and most experienced of the crew.

Weihe grew up in Nebraska near the Elkhorn River and began cleaning stalls and feeding chickens on the family farm at 7. His family moved to Puerto Rico when he was a teenager; he didn’t like it, so he set out on his own. At 15, he ended up on a ship, working as a deckhand until his superintendent asked him to make a dive.

“As soon as I hit the water, the world just exploded, and I knew it was what I wanted to do for the rest of my life,” Weihe says.

He spent the next 40 years working on oil barges and rigs, welding 400 feet below the surface in a black world. Sometimes he stayed beneath the water for 35 days. About 15 years ago, he met Ferris. The two became friends. Weihe taught Ferris to trust his instincts, telling him that the good stuff lies beneath. Ferris began Defiant Marine, a deep-sea salvaging company, in 2010. When Ferris founded the distillery, Weihe immediately wanted a part in it. He cut back on the number of dives he took and moved to Golden Valley.

And they did, right there in Golden Valley.

When Weihe and Ferris began researching how to make the finest single malt on the shelves, they started with one of the most crucial steps in the process: the still. They traveled to Germany to pick out a still that they could use to make a premium spirit. They ordered it custom-built, and there are only a few like it in the United States, Weihe says.

Ferris and Weihe spent 16-hour days studying whisky recipes. They bought the finest barley and perfected a recipe that imparts notes of vanilla, caramel, wood, and spice. They tested the spring water, which comes from 220 feet below the ground, for alkalinity (it is perfect for whisky, Ferris says). They studied what kind of oak to age the liquor in, and what temperatures in which to distill the alcohol. They found the right combination of water to cut down the proof.

And they learned how to turn what is ordinarily a five- to 10-year process into a two-month event.

The first batch of their whisky, which they named Defiant, hit shelves on December 12, 2012. Now, ABC stores sell out of the drink frequently. The whisky won a silver medal in the 2013 Artisan Distillers Taste Challenge. Greensboro Coliseum named Defiant its premier spirit. Everyone seems to want a sip.

When Weihe opens the doors to the red metal building every morning, he smells the fermenting grain and hears the industrial fans humming. He sees his still: a luminous copper and stainless steel piece of machinery that turns barley into liquor. In the middle of the still, an engraved logo on the door gleams. It reads: Blue Ridge Distilling Company.

Joel Patrino, one of the distillers — or whisky makers — buys his barley from Canada, cracks it up, and adds water and yeast for fermentation. When it’s finished, the mixture pumps into the still, where the alcohol vapor boils from the water and rises to the top. If the quality becomes good enough, the liquor condenses and drips from the still into a tank. “It’s all science,” Patrino says.

Patrino leans against the still and describes his process. He splits the liquor that falls from the still into three categories: heads, hearts, and tails. The heads smell like nail polish remover and have too much alcohol; the tails have an oily consistency. Patrino looks for the hearts: the liquor that tastes the best. That’s what he keeps.

The clear liquor falls from the steel spigot into a 30-gallon container, and Patrino sticks his pinky into the stream and tastes. “This is what falls out,” he says. “It’s starting to clear up. Hopefully it’ll go into hearts soon.”

But the next step sets Blue Ridge apart from other distilling companies. Instead of aging whisky in barrels for years, Weihe and Ferris figured out how to shorten the time to 60 days. Oak barrels are nearly impermeable, which is why it traditionally takes so long to release the flavors into the liquor. By aging Defiant in stainless steel and adding a special kind of American oak (the exact kind is a secret) per batch, Patrino allows the liquid to flow through the oak and soak up the flavors more quickly. It results in a smooth blend with hints of caramel, honey, vanilla, and oak; an 82-proof whisky priced at about $55 a fifth.

At night, after sunset, Weihe chronicles his day. His journals are massive records of his life. He’s filled 20 or 30. But this time in his life has become his favorite, he says. It is quiet. It is still. He walks to the woods whenever he wants.

On a recent night, the clouds darken. It rains. Weihe hears the creek gush behind the building. The blackness descends. Every now and then, a firefly lights up the sky. Weihe looks at the shadow of the mountains in the distance, and he feels happy here. He sips his whisky, drains his glass, and savors what he finds at the bottom. 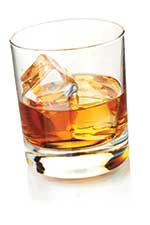 It’s not just a spelling preference. Serious whiskey/whisky fans take the spelling of their drink seriously.

The difference between the two is the country of origin. In Canada and Scotland, distillers generally spell their brew without an “E.” Whisky. In the United States and Ireland, we add a little something.

When Tim Ferris decided to make a single-malt drink like Scotch, he soon learned that he couldn’t call it Scotch unless it was made in Scotland. So he settled for whisky, dropping the “E” as a hat tip to Scotland. Cheers.