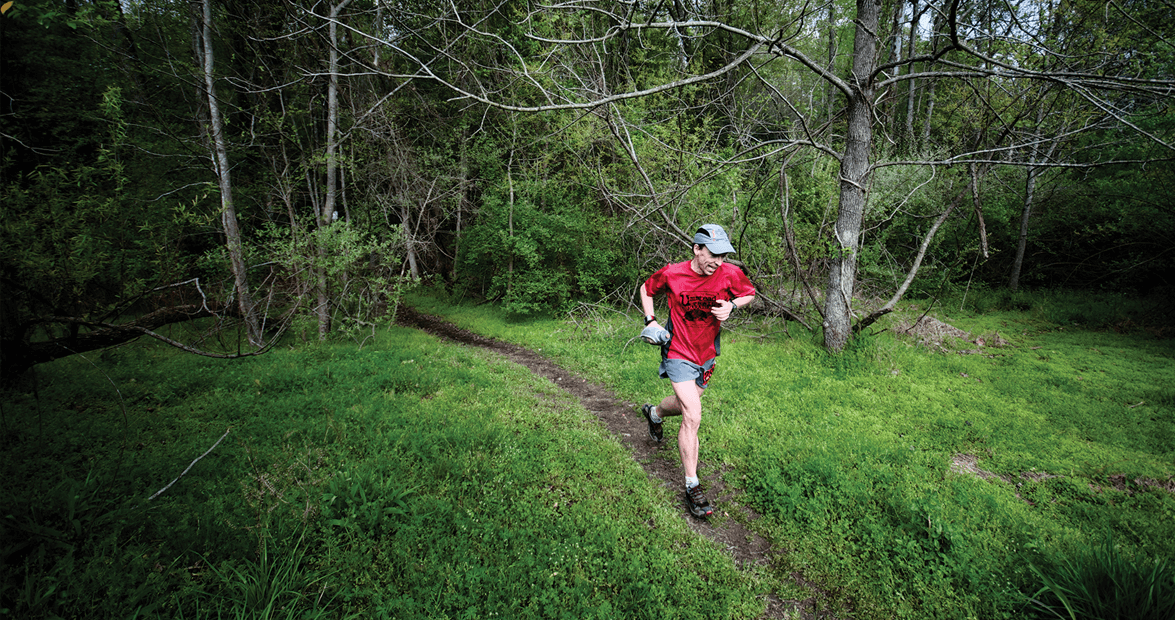 Scot Ward has trekked the Mountains-to-Sea Trail end to end — about a thousand miles from Clingman’s Dome to Jockey’s Ridge — four times.

Along the way, he’s startled a mama bear and her three cubs, he’s camped out back of a church and used its spigot for a bath, and he’s pushed through the darkness of five tunnels.

But the experience reached new heights of cool last year when Ward rode nearly half the route on a 38-inch long-board skateboard, kicking himself across North Carolina on one foot.

Most people think of a trail as a footpath through wilderness, a solitary walkway populated by sassafras trees and woodpeckers. If you’ve ever spent time on the Appalachian Trail (AT), you’ve seen the thru-hikers — rail-thin backpackers tearing through the woods at 20 miles a day, hidden in a canopy of leaves, hardly seeing the sun.

Parts of the Mountains-to-Sea Trail (or MST, as it is affectionately nicknamed) are like that. Walk it, and you cross the Smoky Mountains, climb Mount Mitchell, and follow the Blue Ridge Parkway. The trail is rugged enough that at one point you’ve got to wade thigh-deep across the Linville River.

But what sets this trail apart from its longer and more famous rivals — the AT, most notably — is that it carries its travelers along the shoulders of asphalt back roads, past people’s mailboxes, directly through the heart of ordinary Tar Heel life.

Of the thousand miles snaking across the state, only about 500 are what you’d call a trail, marked with a circular, white blaze, officially designated by the state.

For the rest of the journey, you’re on the shoulder of a rural highway, drawing the ire of country dogs who haven’t seen another human all day.

In Franklin County, you find yourself on Pine Ridge Road, traversing a flyspeck-size hamlet called Sutton. On a Monday morning, you can hear a rooster crowing, watch a retiree practice his putt, and learn that Lt. Harvey D. Griffin of the 47th N.C. Infantry met his end on January 9 and has rested under the same wheat field since 1863. (His brother Robert, you also learn, survived the war and lived to be an old man until 1917.)

A few counties farther east, you’ll cross a bridge over Black Creek, where either a hunter or an opportunistic motorist has stripped the meat off two deer and left the bones behind — a reminder that a lot of people in this state still eat wild animals. Not half a mile from this spectacle, you’ll encounter a llama farm.

The trail takes you through Daddysville, down Big Daddy’s Road, and over Unbridled Spirit Lane.

Landmarks vary from Floyd’s Grocery to East Wake Guns, from a Baptist church founded in 1788 to an El Camino full of used tires.

You get the feeling that most people who live and work along this east-to-west line have no idea they’re on anything so grand as a Mountains-to-Sea Trail, and for much of the route, there’s no real clue.

But just giving it the name lends the route so much importance. The dream of a statewide footpath may never happen. But for now, having drawn the line, the invitation to investigate North Carolina at its most majestic and scruffy is extended.

So when Ward, 38, cruised through on his skateboard, he could absorb it all at 10 miles per hour, directing the tractor-trailers around him with his free hands.

“When you’re on the Appalachian Trail, what do you see?” Ward asks. “Woods. A fabulous forest experience. The Mountains-to-Sea Trail is a people experience. When you hike the MST, you really know North Carolina. The mountain culture, the farming culture, the city culture, the Coastal Plain, the swamp people, the beach, and all that wonderful terrain. It’s not just looking at a pine tree over here and an oak tree over there.”

In his 86 years, Allen DeHart has hiked something in the neighborhood of 60,000 miles — at least, that’s the figure he reckons after mapping trails from West Virginia to Florida for his 11 guidebooks.

DeHart grew up a short walk from the AT in Virginia and spent his early life cutting trails between farms in the wilderness, wondering how long it would take to walk to a peak in the distance.

He knew the MST when it was just a theory, a vague sketch in the mind of state government officials, and he was the first to hike it all the way across.

In the early 1970s, state leaders decided they wanted a route from Mount Mitchell — the highest point on the East Coast — to the Atlantic Ocean. This pipe dream pushed farther west to include the state’s far-western mountains, eventually landing at the top of Clingman’s Dome on the Tennessee border.

But even with a rough line sketched on paper, nobody knew what actually lay out there until DeHart explored it with his students from Louisburg College, where he taught history and psychology.

Little existed in the way of a trail until DeHart flagged the route, blazed it, dug it, supervised it, and organized its maintenance — a task that crossed numerous bureaucratic and turf lines.

One 60-mile section, from Stone Mountain State Park to Blowing Rock, started in 1998 and ended with a ceremony honoring DeHart’s work 14 years later in October 2012.

He and his friend Alan Householder were the first to walk the route, and after 16 years, he still rattles off their time as though he has it tattooed on his forearm: two months and 11 days.

Around that time, DeHart founded Friends of the Mountains-to-Sea Trail and divvied up the route into little parcels for caretaking. Today that group has about 600 members who watch over their own backyard sections.

DeHart is still a vigorous hiker more than halfway into his ninth decade. But the original dream for the trail may never fully materialize: an unbroken footpath running the state from tip to tip. There just isn’t enough public land.

But as DeHart walks the trail through Eno River State Park, he stops at an overlook on a boulder and looks down into the rippling water.

“I remember we insisted this be part of the trail,” he says, watching leaves bounce over the rapids. “The water looks so clean there.”

You don’t have to spend two months hiking, mailing yourself food and cutting yourself off from your life, to enjoy the trail. A dozen guides can show you how to spend a day hiking a piece of it at a time.

On the Falls Lake section between Raleigh and Durham, it’s a 20-minute drive from a city to a place where the only noise is lapping water, the only company a startled deer.

Danny Bernstein hiked the whole trail that way, a bit here and a bit there. She didn’t want to camp illegally, and the Blue Ridge Parkway section is still stubbornly hostile to pitching a tent.

But she wanted to know the state. So she finished, one step after another.

Her favorite parts all came in the trail’s least-defined sections, where North Carolina backroads butt hardest up against a retiree — Bernstein is 66 — in hiking boots. That’s where the scenery affected her the deepest.

She’d never touched cotton before, never even knew what it looked like.

She’d never seen tobacco other than inside of a burning cigarette.

She had no idea that North Carolina saw major battles in the Revolutionary War.

She hadn’t seen much outside of Asheville, where she lived, and she finished the trail knowing North Carolina like an in-law who’d opened up the family history for the first time.

“It’s like a microcosm of the whole state,” Bernstein says.

Hikers are often inspired to put their impressions into print. Ward, DeHart, and Bernstein have all written guidebooks, available from bookstores or Amazon.com.

It’s not the Appalachian Trail and probably never will be. It doesn’t have a culture organized around it; it doesn’t have shelters waiting to comfort a tired hiker.

You’ve still got to get creative as a camper. DeHart’s guide includes the telephone numbers of people who live along the trail and will let MST hikers squat for the night.

Ward left flyers at churches along the trail, and has now collected more than 50 that allow campers to stay overnight. But even after laying that groundwork, things still get tricky. He stopped one night and pitched a tent behind a gas station near Danbury, knowing the owner. Yet he awoke the next morning with a shotgun pointed in his general direction.

That’s who we are, and the MST lets you see it, from the trailer park to the highest point east of the Mississippi River, from the bears to the sand dunes where man first learned to fly.

Want to know more?
Danny Bernstein’s guidebook, The Mountains-to-Sea Trail Across North Carolina is available from The History Press, historypress.net.