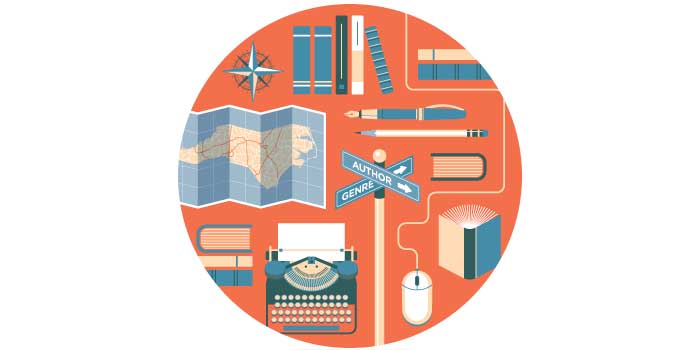 Alphabetically, the first town listed on the North Carolina Literary Map does not exist.

Abbotsville, the Hendersonville-inspired setting of Ann B. Ross’s Miss Julia series of books, won’t show up on your GPS. But it will show up on this map, which contains not only North Carolina books and authors and where they hail from, but also, on occasion, the fictional North Carolina towns they write about.

The map, created and managed by the University of North Carolina at Greensboro’s special collections library, contains about 3,100 authors. There are even some you might not associate straightaway with North Carolina, like F. Scott Fitzgerald. He earned his way onto the map by virtue of spending some months in Asheville while his wife, Zelda, was institutionalized there.

In one way or another, all 100 counties in North Carolina are represented.

Five years ago simultaneous ideas were budding: UNCG wanted to attempt more digital projects; and workers at the North Carolina State Library’s Center for the Book were hankering for an online literary map, inspired by a Library of Congress presentation.

In the summer of 2008, UNCG and the state library teamed up with this map in mind. They began to work on a database in 2009. The map first went live with a “soft launch” in 2010 and even got a little press at the time. But the map’s creators might have been better off if no one had known about it for a little longer.

“The first comment we got was, ‘Where’s Thomas Wolfe?’” says Jennifer Motszko, UNCG manuscript archivist. “He wasn’t in there because he’s at the end of the alphabet, and we just hadn’t gotten to him yet. “It seemed daunting at the time.”

It was around that time that the map ended up in the hands of Gorman, Motszko, and archivist Kathelene Smith.

They soon realized that in addition to logistic database issues, the map’s purpose itself needed to change. It was originally conceived as an academic resource, but they saw a broader appeal. The public, K-12 students, and cultural tourists could use the map, too.

Regardless of audience, keeping the map current is challenging. The dead, thankfully, are easy to keep track of. But among the living, new writers emerge, readers submit authors and works for inclusion via the web, and existing authors publish new books.

Even well-documented writers present problems. Tracking the works of poet Fred Chappell, for example, was no problem, but figuring out where the poems were set was. After research failed to yield results, Smith wrote to Chappell. He replied with a helpful letter that broke down all of his works by location.
Ed Southern, executive director of the North Carolina Writers’ Network, jokes that writers relish any chance to see their names listed but notes more seriously how important it is for writers to know who (and where) their peers are and who came before them.

Southern, who is part of an advisory committee for the map, catches himself after saying he’s a big fan of the finished product. He knows that when it comes to tracking North Carolina’s writers and their works, there’s no such thing.

“The great thing about having an online map is that it’s constantly evolving, it’s constantly updating,” Southern says. “It’s not like North Carolina is going to stop producing good writers anytime soon.”