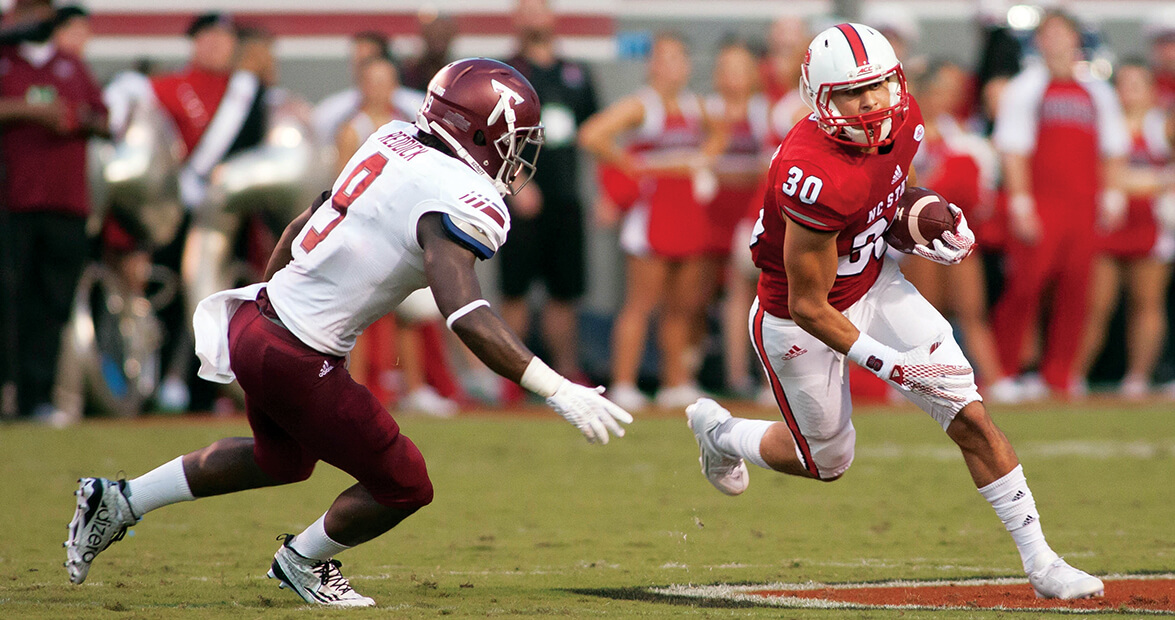 One of the first Pop Warner football games Gavin Locklear ever played in as a fourth grader was also nearly his last. “I was in the backfield and I got the handoff and started running up the field and boom! I got smacked by two big dudes and the wind came out of me,” Locklear remembers. “Right then I thought, ‘I’m done. This is not the sport for me.’”

Locklear quit that team, but he could never stiff-arm his love for football. Before his first varsity game at Apex High School as a 5-foot-8-inch, 150-pound ninth grader, Locklear recalls watching a viral video of a massive Fuquay-Varina linebacker knocking an opponent’s helmet off. “On my first play I got lined up for a spot route, and I am running right towards that guy,” Locklear says. “I thought, ‘I’m not letting this dude knock my helmet off,’ so I caught the ball and hit the dirt real quick.”

“I was never the biggest, the fastest, or the strongest,” he says, “but my football IQ and my passion for the game have helped me overcome the odds.”

College football recruiters weren’t exactly lined up at Locklear’s door in the spring of 2013, clamoring for an undersize receiver who caught only 21 passes in his senior year at Apex. In fact, with his signing deadline rapidly approaching, Locklear had two scholarship offers from smaller schools: Campbell and Wingate.

But Apex High coach Joe Kilby had developed a relationship with recently hired NC State coach Dave Doeren, who offered Locklear a walk-on spot. Locklear thought back to when he was a 7-year-old making the short drive to his first football game at NC State, and without any scholarship money or any promise that he would ever set foot on the field in a game, he didn’t hesitate. “If I’d settled for a lower-division school,” Locklear says, “I would have always wondered, ‘What if I’d gone to State and something great would have happened?’”

Walk-ons are the anonymous crash test dummies of college football, so when Locklear arrived at NC State that August, he had not spoken to a single coach on the Wolfpack staff. Doeren had never seen him play. Locklear was one of two dozen walk-ons ticketed for roles as extras on the Wolfpack scout team. “When we first met as freshmen I had one thought,” recalls Locklear’s teammate Jerod Fernandez. “‘Who is this scrawny little toothpick of a guy, and what position does he play?’”

That summer, Locklear was asked to fill out a sheet of football goals. They were decidedly walk-on goals: Give maximum effort in everything I do. Scout Team Player of the Week. Play in a game.

Locklear admits that he harbored some serious doubts, but he turned for inspiration to his late grandfather Jerry Lowry, a pastor. “I just kept telling myself that it doesn’t matter how hard the workout is,” Locklear says. “If my grandfather could fight cancer for as many years as he did, never slowing down, always carrying out his work, then I can fight through any adversity.”

Says Doeren, “Gavin proved to be a self-starter willing to outwork people to show he deserved to play.”

In nine months, Locklear climbed from the bottom of the Wolfpack receivers’ depth chart to scrimmaging with the starting offense in the 2014 spring game. Then, during the last play of a practice that summer, he suffered a compound leg fracture. Locklear admits he cried that day, not because of the intense pain, but because he was just six weeks away from finally living out his dream. Suddenly, the walk-on couldn’t walk.

Just one year later, impressed by Locklear’s battle through a brutal rehab, Doeren awarded him a full scholarship. Locklear calls that moment “the thing I’m most proud of in my life.” It allowed him to check off another box on his goal sheet. During the 2015 season, Locklear caught seven passes, and this fall, he will chase more of his goals, like starting a game. But it is the final goal on his list, the only one typed in italicized capital letters with an exclamation point, that has become Locklear’s trademark: DON’T EVER GIVE UP!