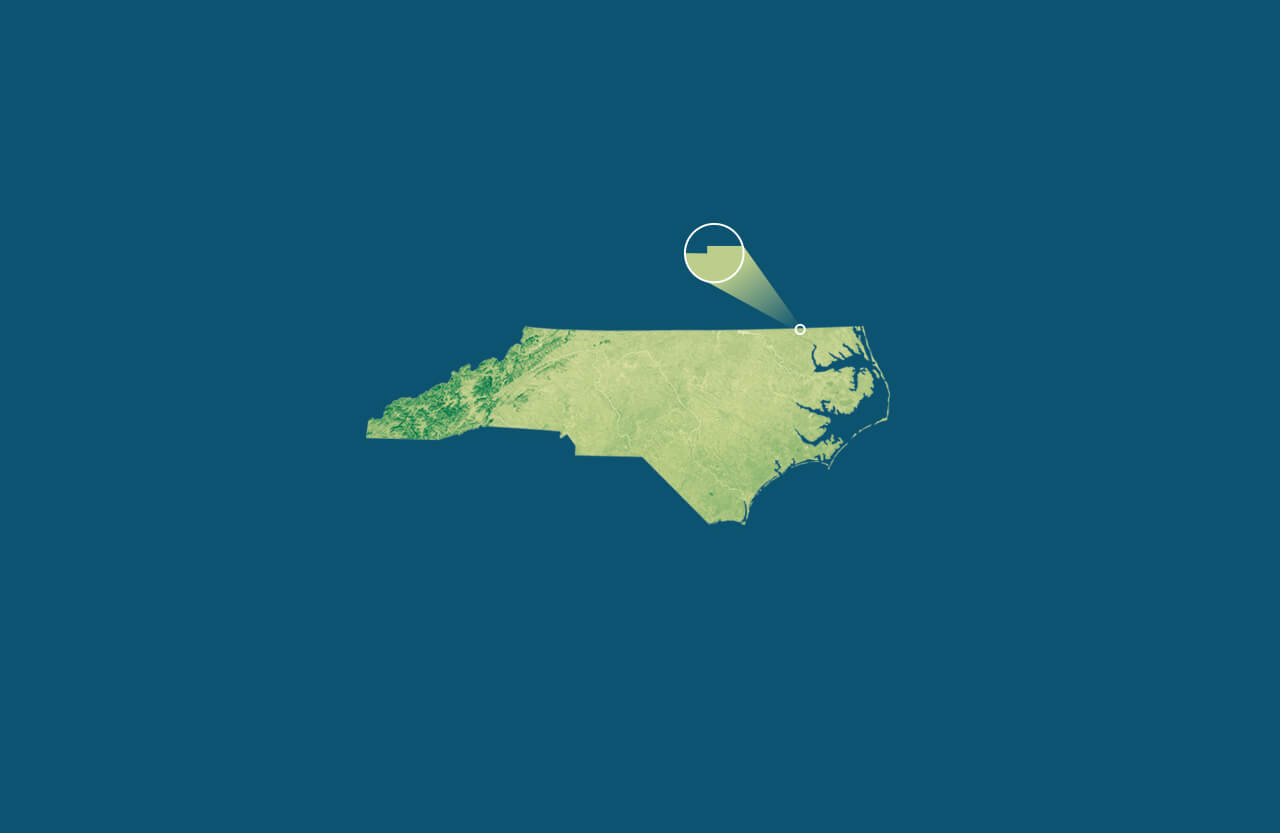 As proud North Carolinians, we hold certain truths to be self-evident. Consider them tacit additions to our state’s constitution. For starters, we’re First in Flight. (Sorry, Ohio.) Also, blue isn’t just blue here: It’s Carolina blue, or it belongs to that other school 10 miles down the road that shall not be named by this UNC-CH alumna — at least not without a fury of expletives to follow. Then there’s our tongue-in-cheek mantra that really functions as our unofficial state motto: North Carolina is the “vale of humility between two mountains of conceit.”

Oh do we ever have a complicated history with our neighbors in every which way — Virginia, South Carolina, Tennessee, and Georgia — so much so that it’s permanently notched within our borders. What funny things, state lines. Unlike out west where the borders are straight and the states are boxy, there are many snags in our Southern fabric.

There’s the enduring squabble between Georgia and Tennessee that was recently rehashed during a particularly grueling drought when Georgia wanted water from the Tennessee River. And for South Charlotte residents, their homes’ proximity to the border is so intrinsic to their way of life, they think about it every time they fill the car up at the pump. A difference of 21 cents in gas tax is quite a big one.

But there’s one particular bump in the boundary between North Carolina and Virginia that is barely noticeable but has a surprising and storied past. At first glance, our northern boundary gives the appearance of being completely straight, but trace your forefinger across a map until you’re smack dab between Hertford and Gates counties. As the boundary line moves away from the coast, past the Great Dismal Swamp, and toward the West, the latitude line falls ever so slightly.

Even on a large foldout map, the sharp change in the boundary line doesn’t even make a centimeter’s difference. We’re talking about less than a mile here. So then why was such a fuss made for more than a century over that itsy little bump?

Well, to start, we’ll blame it on England. Or King Charles II, to be more specific.

When he took the throne in 1660, England had just been through a civil war. Charlie Grymes, an adjunct professor of geography at George Mason University, says Charles II didn’t have much money to offer as a gift to those who helped restore him to the throne.

“So, he was giving away all the land in America, land he had never seen and never cared about,” say Grymes. (Grymes’ extensive knowledge on the subject makes up for his allegiance to Old Virginia and the fact that he shares a name with the king who got us in this whole mess in first place.)

This gifted land was none other than the Province of North Carolina, a territory that incorporated what would later become several Southern states, including North Carolina. When the Carolina Charter of 1663 was created, our northern boundary was placed at 36 degrees north latitude. But two years later, some folks got fickle, and the charter was revised. The province’s northern boundary was supposed to be extended “within or about” 36 degrees 30 minutes north to give Carolina control over the Albemarle Sound and shipping in the area.

Matters then became increasingly complicated. According to the revised charter, the raised boundary line was supposed to start at the north end of the Currituck River or Inlet and run west to Wyonoak Creek and then due west to the South-Seas.

But, you see, Wyonoak Creek didn’t actually exist. “Wyonoak” indicated the location of a Native American village — a nomadic one, at that. Carolinians thought the supposed creek was actually Nottoway River while the Virginians claimed it was Wiccacon Creek. As a compromise, the two parties arrived at an agreement that revolves around the intersection of the Chowan, Blackwater, and Nottaway rivers.

Simple? Not so fast.

Each attempt to survey the boundary was a complete mess. Survey equipment failed. Virginians accused Carolinians of sabotaging the effort. The land was “made a fitter lodging for tadpoles than men,” wrote William Byrd II, a notable member of the survey effort. (The trek required going through the Great Dismal Swamp, after all.) And so it goes.

It wasn’t until after Byrd went through the area in 1728 that the dispute was settled. Also, it took until 1799 for the entire border between North Carolina and Virginia to be finalized, Grymes says. This all raises the question: Was the fuss truly worth it?

“I think there’s got to be a wonderful story of guys sitting around a kitchen table arguing with each other,” Grymes says. “What are we going do? How are we going to get it done? Who’s going to do it? And is it really worth all this effort? I mean, there are mosquitoes out there — and snakes.”

While commissioners were in a tizzy, others would flock to the no man’s land to avoid paying taxes and engage in a bit of debauchery.

It was good fun for those trying to stay under the radar.

“If you didn’t have enough assets to pay for land, you could just march to the edge of the frontier, plant crops, and live happily ever after on someone else’s land,” Grymes says.

When you look at the aerial view of the land in question now, there’s not a whole lot to see: just the trees, the river, and a lone country road. It’s incredible to think about the arguments over the land that occurred centuries ago when you consider how little relevance it holds to our lives now.

How quirky that little notch in the land is, but how wonderful it is to know we can proudly claim it as all our own.