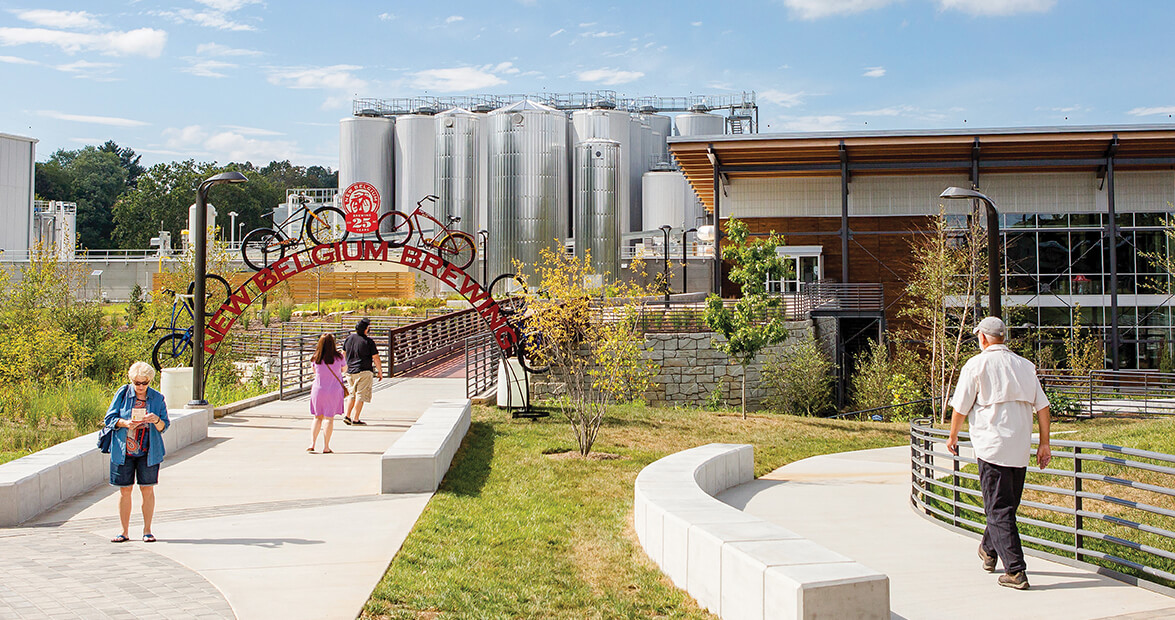 The tour of New Belgium’s new brewery in West Asheville ends in a small room that overlooks a spacious production floor. Below, brown bottles fill up with amber beer. Moments later, they’re crowned with bright red caps. If the line’s running, a visitor can pop open a bottle that was filled mere minutes ago. The reaction is usually the same: This is the freshest beer I’ve ever had. Because it probably is.

“You get the Laverne & Shirley jokes,” says Tyler Foos, looking down at the production line. Out of the 120 people who work at this brewery, most were hired locally. The other 15 or so, including Foos, came from New Belgium’s first brewery and headquarters in Fort Collins, Colorado. Foos is in charge of the tours, and people often ask him how New Belgium’s home city stacks up against its new one. His standard answer: The water quality and outdoorsiness of the people are similar. The mountains there are bigger, but the flora here is more lush. “I’ve gotten that question so much,” he says. “I wonder what they want the difference to be.”

West Asheville is what Asheville would be if you boiled down its sap into a strong syrup. The neighborhood proudly has no chain restaurants or big-box stores. Everything is small and local — bakeries, bars, and barbershops abound, especially along Haywood Road — and the people who live and work here are a tight-knit group of entrepreneurs and artists, do-gooders and young families. People — even people from other neighborhoods — call it Best Asheville. 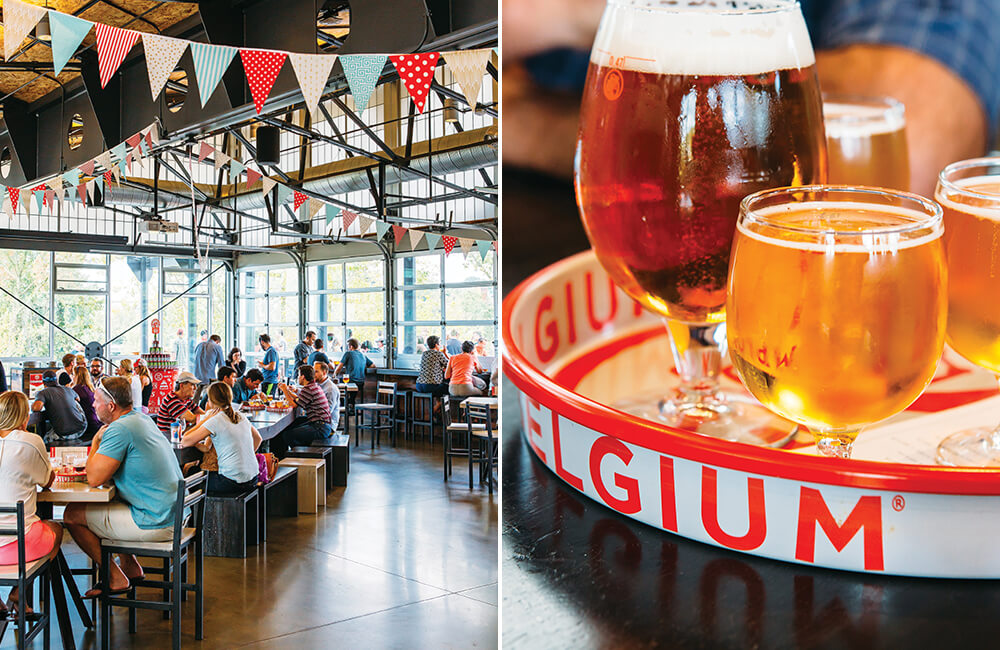 The beer flows in the Liquid Center, where more than a dozen familiar and hard-to-find New Belgium beers are on tap. photograph by Tim Robison

But over the past 15 years, housing prices have doubled in the area, and many shops are seeing their rents rise. New apartments and stores are springing up on the hillside across the river. “We’re definitely at a tipping point,” says Joshua Martin, who bought a house on Deaver Street years ago because he and his wife could afford it on their nonprofit salaries. That wouldn’t be the case today. A place that sees itself as the embodiment of bootstrapping, local-first businesses is getting closer looks from big companies that want to capitalize on its cool.

Enter New Belgium, a beer company with its own distinctive mountain-town ethos and independent spirit. Founded in 1991, the company rode the craft beer wave to become one of the nation’s best-known and fastest-growing breweries. But the Colorado facility had reached its capacity, and beer is heavy, hard to transport over long distances, so building a new brewery closer to the East Coast became a priority. There were, as General Manager Jay Richardson tells it, 33 utopian criteria for the new facility’s location. Among them: It had to be close to the center of town, bikeable (see the New Belgium logo), and built on a spot that needed some love. “It didn’t feel good to build on untouched land,” he says. “We didn’t want this to be a plant on the outskirts.”

Some in West Asheville were wary of outsiders trying to become insiders.

New Belgium ultimately chose 18 acres along the French Broad River in West Asheville, a brownfield site that was home to an auto junkyard and a livestock auction house. Over four long, expensive years, the company demolished the existing buildings, raised parts of the property by 10 feet to get out of the floodplain, and cleaned up a polluted creek on the site. The $175 million facility opened in 2016, and joins Sierra Nevada and Oskar Blues as breweries that started in Western states, but chose the North Carolina mountains for their East Coast outposts.

Nods to the property’s former use are scattered inside the brewery: Letters from the Western Carolina Livestock Co.’s old sign hang downstairs. Metal from the property has been twisted and welded into what one bar-goer calls “the heaviest chairs in Asheville.” Reclaimed wood from the site has been fashioned into seats and tables. A wide deck overlooks the river, the I-240 bridge, and a landscape morphing from industrial to chic. 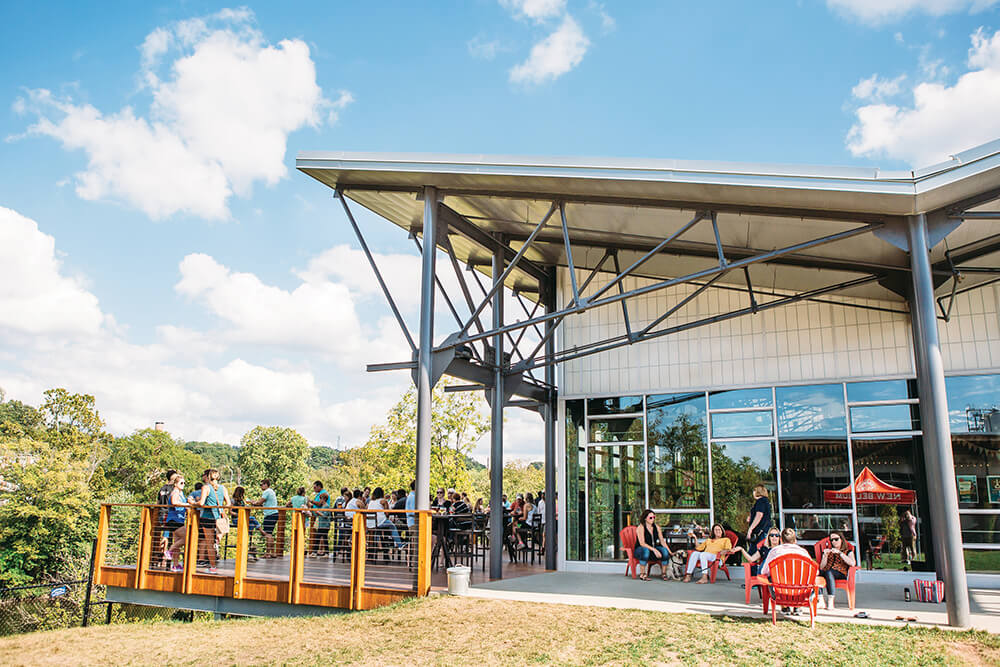 The deck outside the Liquid Center was built by Asheville’s Old Wood Co., offering a prime view of the brewery and river. photograph by Tim Robison

Kids and dogs play on the green lawn out front as locals and out-of-towners walk and bike the new greenway behind the buildings. The brewery is now a part of the neighborhood, but New Belgium knew from the beginning that they would have to work hard to fit into a community with firmly held beliefs. “Whatever it is that they care about,” Richardson says of his neighbors, “it’s pretty deep.”

When New Belgium first announced its expansion to Asheville, a local news blog, ashvegas.com, asked around about the company in Fort Collins. “We didn’t set out to write a puff piece,” its article states. “But sometimes, nobody has anything bad to say.”

Still, some in West Asheville were wary of outsiders trying to become insiders. They didn’t want big businesses to push out small ones. They didn’t want to be priced out. “A rising tide lifts all boats,” says Sam Powers, director of community and economic development for the City of Asheville. “But you don’t want the tide to carry the boats away.”

At first, the neighborhood worried about New Belgium’s fleet of trucks rumbling through neighborhood streets: West Asheville’s roads are old, with low bridges that funnel big trucks onto Haywood Road, the main thoroughfare. The brewery was going to be the biggest industrial facility in the area, trucking loads of Fat Tire, Voodoo Ranger IPA, and more from its brewhouse to a distribution center eight miles away in Enka-Candler. Neighbors were concerned about traffic. About kids. About wrecks. There could have been outrage.

New Belgium executives began meeting with neighborhood leaders every six to eight weeks after unveiling their building plans. When a bunch of neighbors realized that they didn’t have a neighborhood association to speak with a unified voice, they formed one. Eventually, the company and the neighbors came to an agreement: New Belgium would use a variety of beer trucks, some shorter in length and height, and find different driving routes. 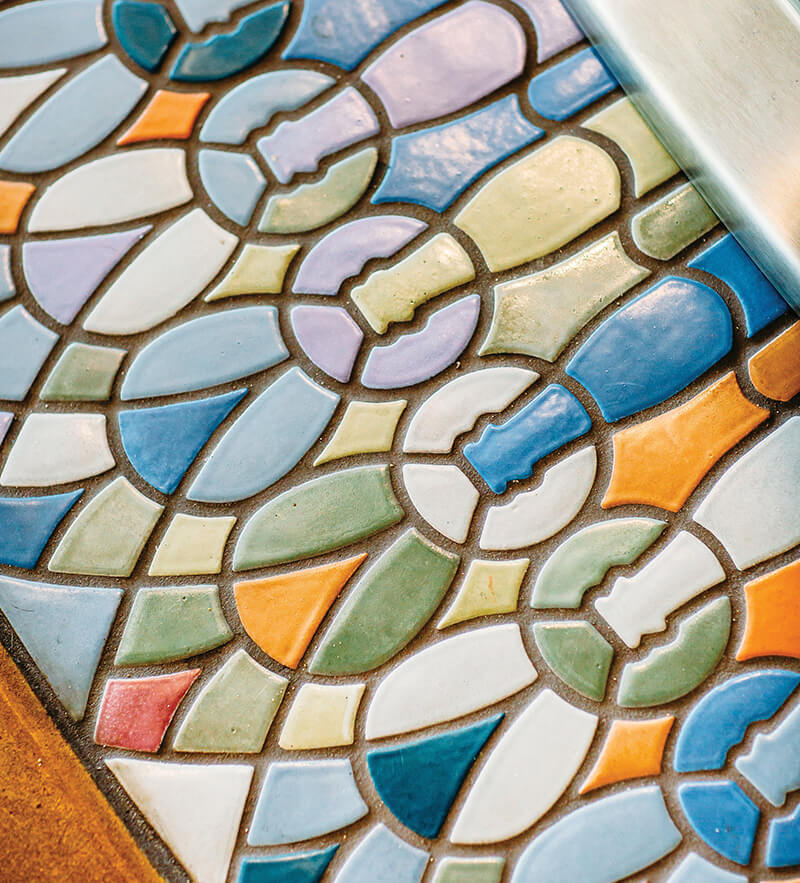 Even the tilework is beer-inspired: This mosaic in the brewhouse was created by local artist Alex Irvine. photograph by Tim Robison

Alice io Oglesby, a member of the West Asheville Business Association, calls the neighborhood meetings “unprecedented in this area.” People could come every few months to ask questions, face to face: Is this place going to smell? Will it be noisy? Is it going to release toxins into the air? The idea, says Oglesby, “was to not have rumors spread.”

Oglesby sits at a table inside New Belgium’s taproom, sipping a beer and munching on a spread of wings and fries from the food truck parked out front. She’s here with Martin and two others who live and work nearby, and the conversation turns to a tricky topic: New Belgium has clearly tried to adapt to the community that surrounds it. But does that make them local?

Yes, says Oglesby, who appreciates the brewery’s reuse of old materials. Dave Campbell, who runs a small marketing company, agrees: “You see New Belgium people out in the community. They’re as local as you can be.” The company holds local beer, music, and film festivals. It tries to work alongside the rest of Asheville’s craft brewers, instead of competing with them. It pays employees a living wage, and all tips go to local charities. But for longtime locals like Martin, who moved in before the boom, there’s still a distinction. “They don’t feel as local as the businesses up on Haywood Road,” he says. “But they’ve woven themselves into local culture.”

“There’s so much green-washing and local-washing,” says Darren Green, owner of a River Arts District woodshop, referring to terms that describe companies that aim to appear more environmentally friendly or community-conscious than they really are. Green, whose team built the interior and deck tables here, values both quality and proximity. New Belgium makes a quality beer — even if the company is not exactly local. And maybe that’s fine. The brewery, Green says, is “a perfect example of a big company coming to an area and blending right in.”

Local, then, may not be the simple buzzword it once was. Is it a matter of the amount of time spent in a place? Or is it more about a state of mind? Oglesby, for example, is “super excited” about a new Ace Hardware that just opened on Haywood Road. Ace is based in suburban Chicago, but she thinks of it as local-ish because its stores are locally managed and independently owned.

Perhaps the “local” threshold is easier to reach when it involves a pressing need. While West Asheville, with its fixer-uppers, might welcome a new place to buy nails and paint, the same can’t be said for its need for locally brewed beer. (This is Asheville, after all.) As Oglesby points out, “West Asheville would have been ok without it.”

Even so, the brewery has brought a ripple effect of local improvements: Roads have been repaved and redesigned. The neighborhood got its first bike lane right out front, on Craven Street. And it’s inspired just a little jealousy from the River Arts District, on the other side of the French Broad River. “Both sides claim New Belgium,” Campbell says with a hearty laugh.

New Belgium has clearly tried to adapt to the community that surrounds it. But does that make them local?

Last fall, New Belgium tried to bridge the gap between the two popular neighborhoods, West Asheville and the River Arts District. Literally. On a chilly November night, more than a dozen people hopped onto their bicycles in the gravel parking lot of Wedge Brewing, a small brewhouse and pub just across the river. A mustachioed New Belgium employee precariously perched a small keg of beer between his belly and the handlebars of a tandem bike. Then the whole peloton took to the streets, following the road between the old brick buildings and warehouses, around a traffic circle. The riders found the bike lane and crossed the bridge to West Asheville, where they veered down a side street and into a parking lot. The tandem bike circled for a bit until someone held open the glass doors to the taproom and the beer rolled right inside.

The ride was, admittedly, a public relations stunt. Wedge and New Belgium collaborated to brew a Dunkelweizen, and for every pint sold, the breweries would donate $1 toward the building of greenways in Buncombe County. Inside New Belgium’s taproom, a bartender tapped the keg and the beer flowed. A who’s who of young, involved Asheville was there, chatting and sipping. In that loud room, a New Belgium employee pulled aside Mike Sule from the nonprofit Asheville on Bikes and told him he had a donation check waiting, and then, almost in a whisper, revealed the amount. For a moment, Sule was the only one in the room at a loss for words, and it became clear that the small gestures here are the ones leaving the biggest impression.