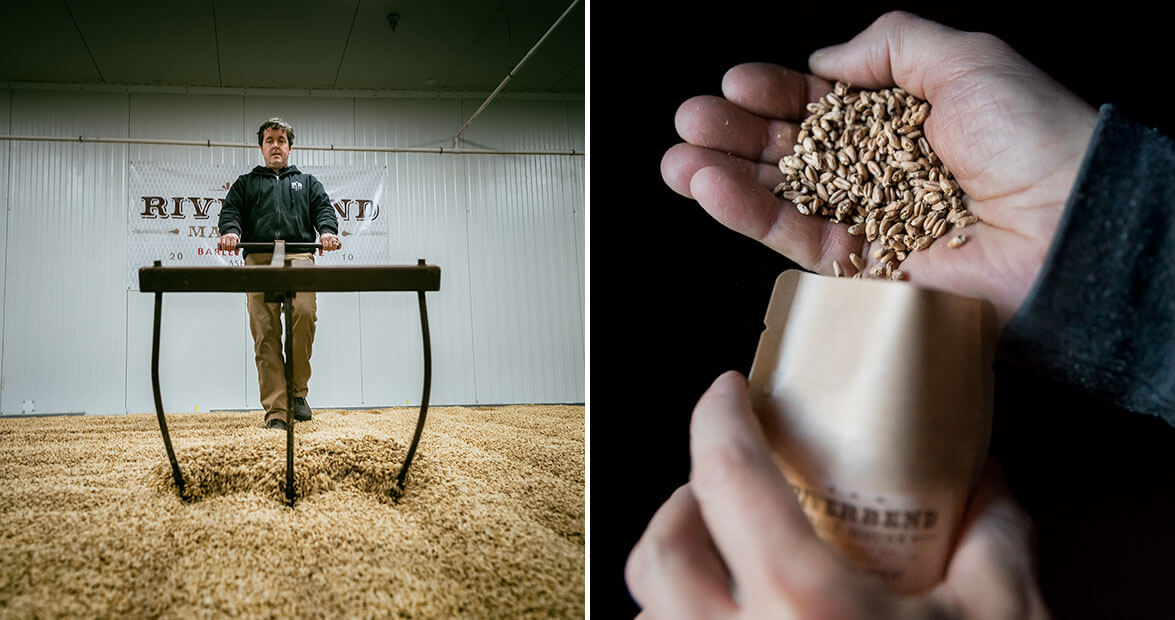 Since they weren’t working much anyway, Brent Manning and Brian Simpson decided they might as well move to Asheville. Both men were environmental consultants in Wilmington, but after the 2008 housing crash, their 50-hour workweeks dwindled to five. Besides, they were ready for a change. Brent loved mountain biking. Brian was a trail runner. They and their families moved west.

Both men wanted to be involved with craft beer. But even then, they felt that Asheville had too many breweries to start a new one. (It has about three times as many today.) Growing hops didn’t seem like a good business plan. Then they looked to barley, which was widely grown across North Carolina, but mostly used as animal feed. Malted barley is a key ingredient in many types of craft beer, but most of it comes from the areas around the Northwestern malthouses where it’s processed. There was craft beer, but no craft malt.

Brent and Brian saw an opportunity.

Today, both men are in charge of the Riverbend Malt House, which started in 2010 with a small smoker in Brian’s basement and has now expanded to Sometimes I Can’t Believe It status: Inside a giant concrete cube of a facility on Asheville’s south side, Riverbend covers more than an acre of floor space, with twisting silver tubing big enough for a child to run through, huge sifting machines, and rows upon rows of white bags containing barley, wheat, and rye.

Malting barley involves a process of being nice, then mean to the seeds, sort of like giving a child a toy and then taking it away the moment his face lights up. First, you steep the raw grain. Next, you dump the seeds into an inches-deep pile, and raise the humidity while keeping the temperature stable. The seeds are raked three times a day. This makes the little seed think it’s been planted, and inside, enzymes start breaking down the outside of the seed. They also turn starches, which store energy, into simple sugars, which give the seed the power it needs to start pushing out a tiny root and the beginnings of leaves. And then, right at that moment, when the seed is comfy and powerful, the mean maltster stops the process to move everything into a kiln, where it’s warmed up and dried out. This doesn’t kill the seed. It just puts things on pause.

After a cleaning stage, the barley (or wheat, or rye), now malted, goes out to brewers or distillers, who use it to make beer or other beverages. During fermentation, yeast turns sugars into alcohol. Malt is also responsible for a beer’s color, head, and taste. You can make beer without hops, but you can’t make it without malt. “It’s the soul of beer,” Brent says.

Brent picks up and chews a bit of grain that’s germinating on the floor. After three days, it still tastes grassy — but give it one more day, and its flavor will be more bready and sweet.

Riverbend’s first batch of barley came from a farm near Salisbury, and since then, they’ve contracted with growers in several states surrounding North Carolina. In the Southeast, winter barley is planted in October and harvested in June, meaning it doesn’t get in the way of a farmer’s commodity crops, and helps to make a little extra money during a slow time.

With a quick stroll through the Giant Concrete Cube, it’s easy to see that what was once a bit of an experiment is now anything but. Last year, Riverbend made 700,000 pounds of malt. This year, in their new facility, they’re planning on producing around three million pounds, and someday could make four times that amount. Riverbend is now one of the largest malthouses in the Southeast, though craft malt still only accounts for 3 percent or less of the national malt market. “It’s still the really early days,” says Scott Hickman, Riverbend’s CEO.

Craft malt is, in an era when seemingly every town in North Carolina is home to a brewery, a way to set beer makers apart. It also gives them a new option to create, a new color for their palette. “They’re reverse-engineering their beer at this point,” Brian says of some brewers. They might require a grain they can’t get from the big malthouses, or a style of roasting that’s still experimental (and requires some tinkering in Riverbend’s new test lab). More and more brewers, Brian says, are on the prowl for new ingredients, “like a chef at a farmers market.”

Hops get the headlines, but malt’s day might soon come. Right now, people often identify beer based on “hoppiness,” and might ask if the hops used in their pint of pale ale are Cascade or Centennial. But the guys at Riverbend see a future in which discerning drinkers demand a beer made from North Carolina-grown six-row Thoroughbred barley. “You don’t say that now,” Scott says. “But why not?”