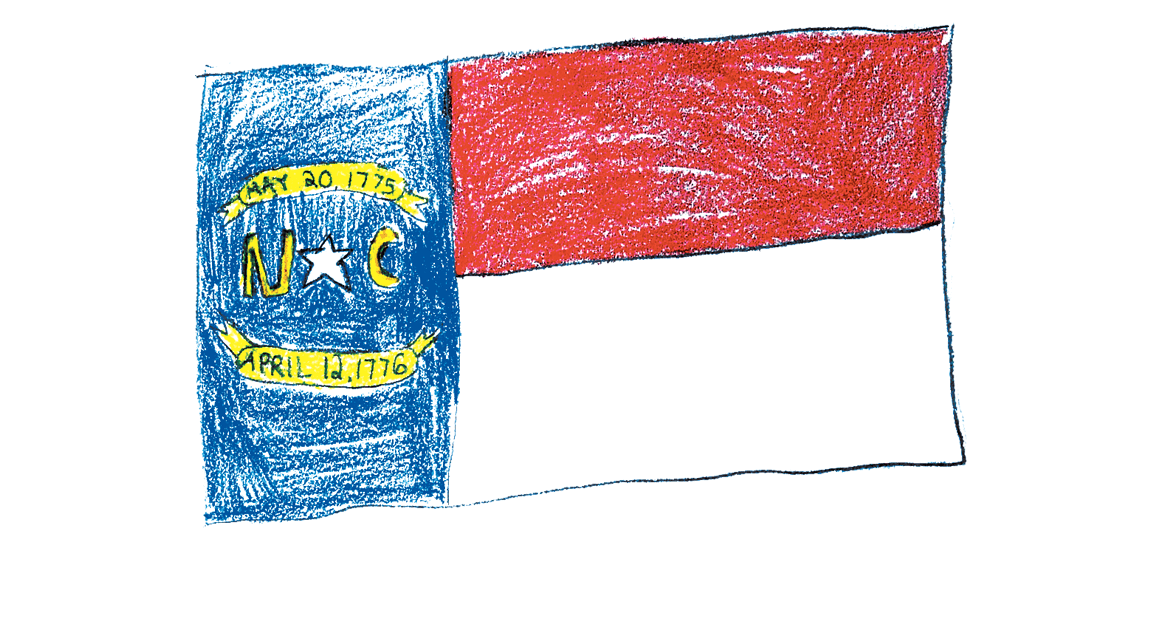 When you tour North Carolina with a fourth grader, the state looks different. Take the Stagville State Historic Site in Durham, for instance. Sure, you’ll see the plantation house, the Great Barn, and the slave cabins at Horton Grove. Go with a fourth-grade girl, though, and you’ll look past all that. You’ll notice smaller things — things like the homemade rag doll on display at the visitor center.

You’ll notice that although the cloth doll is stained and tattered, her embroidered smile still shines. You’ll learn that the toy likely belonged to a young slave girl. And you’ll learn that this doll, unearthed right here at Stagville, provided historical inspiration for Addy Walker, a star of the American Girl series.

My daughter, Kate, knows that series. She, like a lot of her friends, has an American Girl doll and has devoured stacks of the American Girl books, which portray fictional characters against the backdrop of actual events. So when our guide at Stagville told us the bricks in the chimneys at Horton Grove were made by slaves, tracing with her finger the indentation of a child’s footprint preserved in one of those bricks, Kate’s eyes widened with recognition. She had read about the trials of Addy’s time in slavery.

Stagville was the first in a series of history-themed family field trips we undertook last year when Kate was in fourth grade. Like all fourth-graders in North Carolina, she worked on a North Carolina project mandated in the Department of Public Instruction’s Standard Course of Study.

“We’ll start small,” I reassured my daughter and my husband, Gill. “If the first field trip is a bust, I promise I won’t make us go on any others,” I said.

My plan was simple: Each of us would take turns suggesting a weekend excursion or day trip that related to the study of North Carolina. We sampled a rich cross section of places whose stories provided a deep dive into our history, culture, and geography. For Gill and me, the experience allowed us to appreciate these stories through a child’s eyes, open and curious.

Our trip from our home in Durham to the International Civil Rights Center & Museum in Greensboro began on a train. Amtrak’s Piedmont runs east to west across the state, past converted tobacco warehouses and old, kudzu-covered mills. So we boarded a sleek, silver train in Durham on a brisk, January morning, and in about an hour, we arrived in downtown Greensboro.

The Civil Rights museum is a short walk from the Greensboro train station. Kate and her friend took charge of my smartphone, laughing as the blue dot on our Google map inched up Elm Street toward the museum. But we fell silent the moment we stepped into the large room that houses the original Woolworth lunch counter.

The L-shaped counter is staged just as it was that February day in 1960, save for a piece given to the Smithsonian Institution. The menu board advertising hot dogs, banana splits, and coffee, all less than 50 cents, sits above green and orange vinyl stools. And those stools are the same ones occupied by the four college students who sat and calmly, courageously, asked to be served.

Kate gravitated toward a large, circular, touch-screen display of the southeastern states. She swiped on Greensboro, found North Carolina A&T University, then followed the lights on the map as they illuminated the spread of civil rights protests by students in the early 1960s. I watched as my daughter’s gaze — sparked by new knowledge — reflected in those lights.

Gill and I gave Kate the option of skipping the “Hall of Shame” exhibit, which is marked to inform visitors that some of the material might be disturbing. But Kate said she wanted to see. This portion of the museum includes black-and-white photos of terrified Selma, Alabama, protestors being attacked by police dogs, as well as a heavily starched Ku Klux Klan robe.

Kate walked through the hall in silence. She lingered in front of an image of 14-year-old Emmett Till in his open casket. He was beaten so badly he lost an eye, and Kate studied his face as though she was trying to reassemble it into something recognizable.

We walked out of the hall and watched a video reenactment of the moment four students decided they had no choice but to stage a sit-in. During the train ride back to Durham, Kate spoke. “They were teenagers, Mom,” she said.

Her perspective caused her to recognize that Emmett Till and the four college students, and so many of the others who struggled and sacrificed for justice, were closer to her age than to my own.

We took six field trips altogether — to Stagville and the International Civil Rights Museum, and to the State Capitol Building, Biltmore Estate, Battleship North Carolina, and Edenton. Each experience opened my eyes as much as my daughter’s.

In Edenton, Kate quickly vetoed a trolley ride in favor of the free activities for kids offered by North Carolina Historic Sites guides dressed in period costumes. She learned to roll clay into marbles and to dampen corn husks to shape into a doll. She made rope, holding tight to both ends of a wooden contraption that converted cotton thread into sturdy rope through a process reminiscent of a saltwater-taffy machine at the State Fair.

On the porch of the 1767 Chowan County Courthouse, Kate peered out to the water’s edge, where Penelope Barker led a group of women in the Edenton Tea Party protest.

The next day, we followed Kate’s lead again, this time on the Harriet Jacobs self-guided walking tour. Jacobs’s life story, of course, is famous: Born into slavery but taught to read and write by a kind mistress, she was later sold to an abusive master. In Kate’s words, she “escaped and went into hiding in her grandmother’s house because she didn’t want her children to be slaves.”

Our trip ended with us staring across the beautiful waterfront. I wanted to believe Kate was seeing not only the rippling water, but also the ghosts of two powerful women and their heroic acts: Penelope Barker’s tea party and Harriet Jacobs’s daring escape to the boat she boarded to freedom.

Kate spent fourth grade reading and writing about our state’s past, but she also experienced it, in a sense. Her father and I did, too. These field trips, I realized, were our own version of living out our state’s motto: Esse Quam Videri. We didn’t just read history in books; we lived it. And we lived it through Kate, our young daughter who enabled us to remember the past while looking toward what, to her admittedly biased parents, seems a very bright future.

If it’s been awhile since you’ve experienced North Carolina’s past, make time to visit one of the 27 historic places operated by North Carolina Historic Sites. Guides are especially skilled at engaging young children in the tours — and they’ll captivate adults, too.

Charlotte Hawkins Brown Museum — Join the celebration on June 8, Dr. Brown’s birthday, to get kids excited about a site significant in the history of African-American education.

Fort Dobbs ­— Catch battle reenactments and musket- and cannon-firing demonstrations at the only state historic site associated with the French and Indian War.

USS North Carolina Battleship Memorial — Kids will have a blast on the deck of the ship, imagining themselves fighting in the Pacific Theatre during World War II.

Reed Gold Mine — Kids pan for gold at the location of the first documented gold find in the United States.

Thomas Wolfe Memorial — Children may not be interested in reading Wolfe’s novels, but they are sure to like the Wolfe children’s playhouse outside this famous home.

Other sites not to miss: