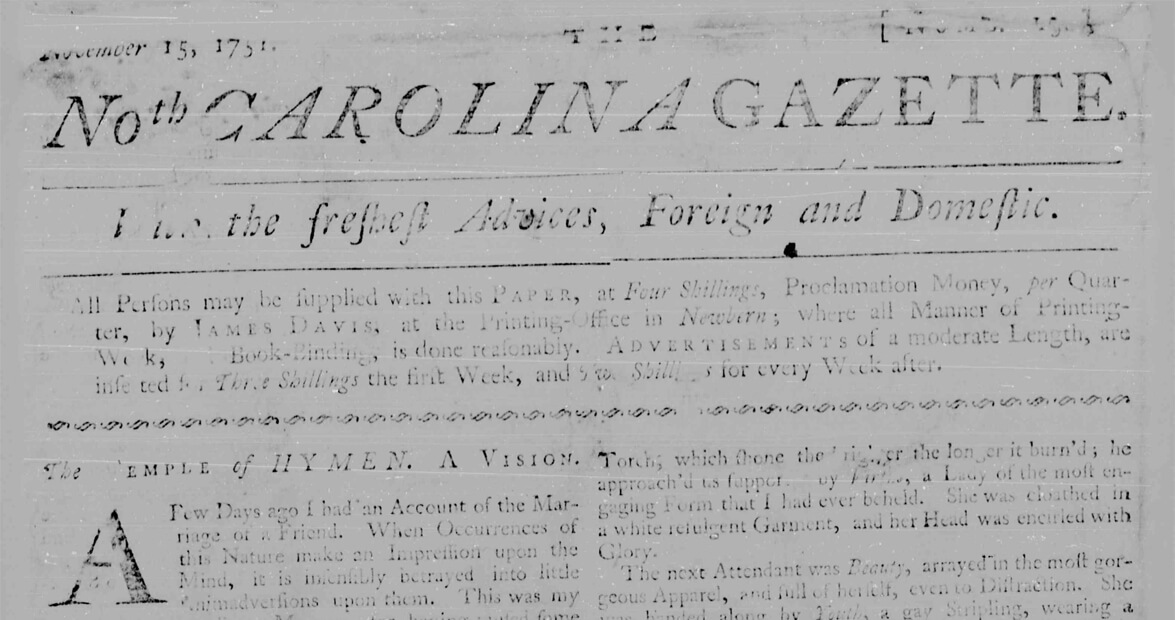 Despite our state’s long-running reputation for award-winning local and regional news publications, North Carolina and Georgia were in fact the last two of the original colonies to establish a printing press. North Carolinians mainly relied on Virginia and South Carolina newspapers to keep up with current affairs, as it had economic ties to Williamsburg and Charleston. The Virginia Gazette, established by William Parks, was highly regarded at the time.

James Davis, a printer in Parks’ Williamsburg shop, was sent to New Bern in 1749 to open the first public printing office in North Carolina. The first piece published there was the Journal of the House of Burgesses. Davis only printed legal documents or money in the first few years.

On August 9, 1751, the first issue of the North Carolina Gazette was printed in New Bern, and distributed from the “printing office, near the church” — an indication of how small the operations were. The original title of the paper was actually the Noth Carolina Gazette, and its slogan was “With the Freshest Advices, Foreign & Domestic.” It cost “4 Shillings, Proclamation Money, per Quarter” — the same amount you would pay for a roasting pig.

The North Carolina Gazette was nothing like the newspapers we know today; it was four pages, and was said to be issued weekly (although it appears to have been published more sporadically than this). Headlines only listed the city that the news was coming from and the date it occurred, such as “London, July 5” or “Genoa, Sept. 15.” 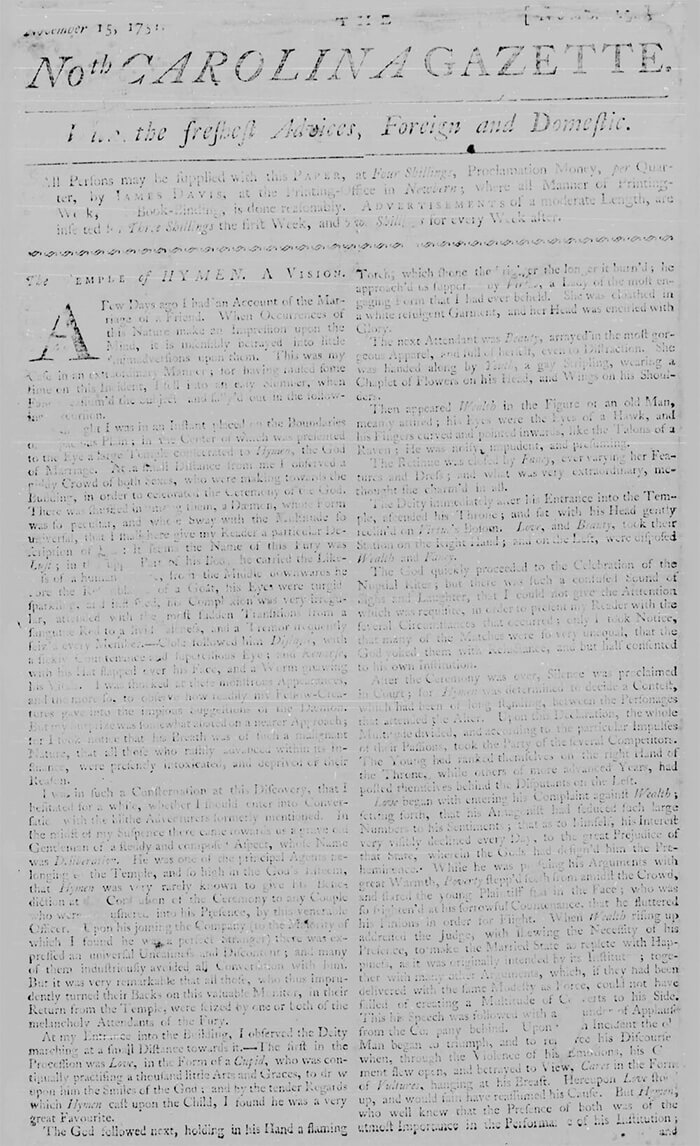 The front page of the November 15, 1751 edition of the Noth Carolina Gazette. photograph by State Archives of North Carolina

The news itself was typically three or more months old, but circulation was a bit slower during this time period. It also tended to cover foreign affairs, as opposed to news of what was happening in the other colonies. The first page appeared to be dedicated to a new essay with each new paper, but strayed from this structure occasionally. A notable instance of this was a letter to William Pitt that had originally been published in an English newspaper.

The last page was dedicated to advertisements, which had no flashy display or illustrations. But just like today’s print publications, these advertisements provided a major source of revenue for the Gazette. An advertisement of “moderate length” would cost three shillings the first week it ran, and two shillings every week after. These ads tended to be about merchant’s products, legal advice, or runaway slaves.

The paper was in circulation off and on until October 18, 1759, although some sources say it may have been discontinued as late as 1761. In 1764, Davis began The North-Carolina Magazine; or Universal Intelligencer. Although it was called a magazine, it was actually a carbon copy of the original Gazette — only with even fewer pages. In May 1768, he returned to the a slightly altered version of the original title (using “North-Carolina” instead of “Noth Carolina”).

Ultimately, Davis would keep distributing the Gazette until his death in 1785. Issues arose, such as the Revolutionary War and a storm that destroyed the print shop. Only six issues of the paper remain today, but researchers have been able to gain an understanding of colonial life and the newspaper business from these remnants. While it may have been sparse, the publication of the North Carolina Gazette marks the beginning of a rich news history in North Carolina, and ultimately paved the way for future newspapers across the state.