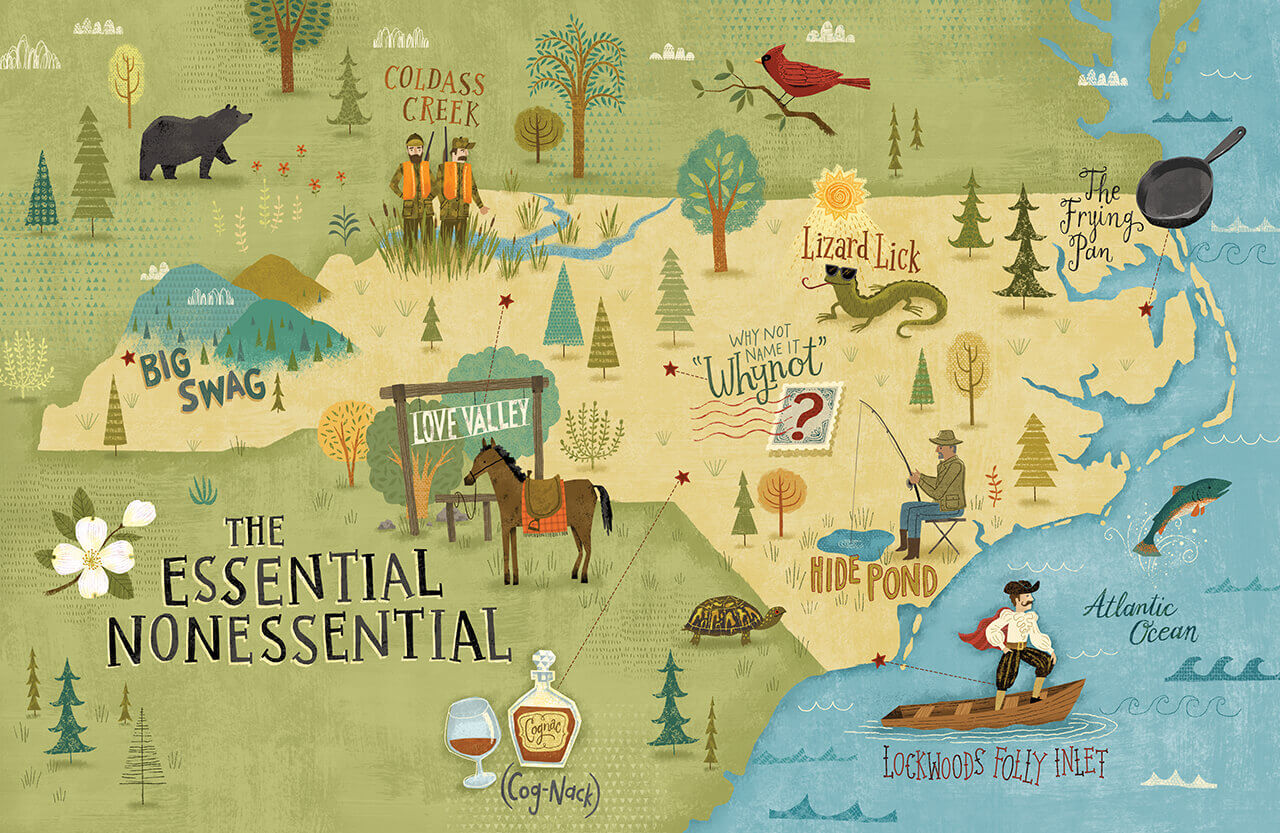 My relatives’ anecdotes are often about a case of hapless luck or eccentric behavior, but they always begin with where the such-and-such poor, crazy soul came from.  Born into a family infinitely curious about place and all that it encompasses, I was raised on stories about people from Conetoe or Speed, Love Valley or Hiddenite. If ever I forget what happened, I always remember where it happened.

So let us call it nurture as much as nature, which led to my abiding love of William Powell’s The North Carolina Gazetteer. I first encountered the book as an undergrad at the University of North Carolina at Chapel Hill, when I was working part-time in the warehouse of UNC Press. I was already disposed toward reference books; my then-mother-in-law, Cissie Geitner Folckemer, a formidably literate woman who lived and died by the Oxford English Dictionary, was in the habit of giving me books like Benét’s Reader’s Encyclopedia and Thomson’s New Biographical Dictionary of Film for Christmas and birthday gifts. I was deeply appreciative of these gifts because, in that pre-Internet age, if you wanted to know something, you went to the library and looked it up. As much as I loved — and love still — a library, having a reference section in my study made me feel formidably literate, too.

The Gazetteer is subtitled “A Dictionary of Tar Heel Places and Their History.” Though it contains more than 20,000 entries, it’s far more than a mere list. I don’t think it was meant to be read in the way I read it — from front to back, like a novel. I read it for the first time over the span of a few weeks, under a tree in the back of the UNC Press warehouse.

I’ve recently complemented my crimped, discolored paperback, bought 30 years ago with my UNC Press employee discount, with the newest edition of the Gazetteer, edited by Michael Hill. In his preface, Hill says of the original: “No other state has anything to approach it. Powell’s Gazetteer is a classic, a work of use to historians, genealogists, librarians, journalists, creative writers, geographers, urban planners, armchair travelers, and anyone with an interest in the Old North State.”

The Gazetteer is, in fact, a deeply poetic book — Linville Gorge is described as “a narrow defile through which the Linville River flows” — despite its trafficking in fact. But even when you read it with an ear tuned to the poetic idiom of Powell’s and Hill’s descriptions, you can’t help but learn something.

For instance: “Big Swag” is not, in fact, a record label, but a Swain County peak. “Lockwoods Folly Inlet” derives its name “from a man named Lockwood, who built a fine boat up Lockwoods Folly River but discovered that it was too large to float into the Atlantic through the inlet. He was forced to abandon his boat and it eventually fell to pieces. Frequently in the seventeenth century, however, the word ‘folly’ was used in the sense of the French folie (delight; favorite abode), and it formed a part of the name of English estates.” If, as Aristotle said, the purpose of art is to instruct as it entertains, that description is as artful as all get-out. I’m entertained by the phrase “built a fine boat up …” the river in question, as well as the fact that the boat “fell to pieces.” But I now stand corrected in my notion that the word folly, as in Seward’s Folly, the derogatory name for U.S. Secretary of State William Seward’s purchase of Alaska, always suggests the hard end of the bargain.

The community of Cognac, in Richmond County, isn’t pronounced in the French-fried manner of the spirit, but just like it’s spelled. If calling the place Cog-Nack sounds wrong to you, you might change your mind if you had to call it by its original name, Eighty-Nine Mile Siding. Cokesbury has nothing to do with a soft drink and everything to do with the Harnett County Methodist bishops Coke and Asbury. There was once gold in Montgomery County, which led to naming the community Coggins Mine. These three edifying and entertaining entries are all found on page 119.

Now that I’ve read the Gazetteer cover to cover, I often allow myself to stop what I’m doing (especially if that something involves housekeeping), pluck the ’teer off the shelf, open a page, and root around. Just now I found myself again in the C’s, where I learned that “Coldass Creek” and “Pinchgut Creek,” in Caldwell County, were “named by two men hunting in the area. They followed a stream until it came to a fork. There they separated, each following one of the forks; they agreed to meet later and name each stream according to their feelings toward it. One man carried the food and the other the sleeping equipment. They became lost but finally met the next day, when they named the creeks.”

What if these men hadn’t gotten lost? What if they’d anticipated getting lost and divvied up the bedrolls and the food? What would these creeks be named, and would we be delighted as much by the story behind their naming? Of course, I know the answers to these questions, as well as the answer to the one that lurks behind our pleasure in this wonderful tale of creation: Where would we be if William Powell hadn’t decided in 1968 to compile the Gazetteer from numerous note cards he’d collected over the years?

We’d be on the Internet, more than likely.  And the Internet would lead us right back to the Gazetteer — I know because I just Googled “Coldass Creek, Caldwell County, NC” and the very page I happened upon in my random leafing popped up on my computer screen.

The Internet is here to stay. But what’s lost when I type “Coldass Creek” into a search box instead of bending to the lowest shelf on the white bookcase in the hallway where my Gazetteer resides is this: the ability to get as lost as those two Caldwell County hunters — one starving, one freezing, both bathed finally in the beauty of creation. Idly passing time with the Gazetteer makes me feel as if I’ve embarked on an adventure similarly characterized by ingenuity and humor. That sentence describes who we are as North Carolinians: ingenious storytellers of a slightly ironic bent. We might not all come from places with crazy names, but we’re all in this wonderful book. Together — just like the entries themselves — we add up to far more than the sum of our parts.